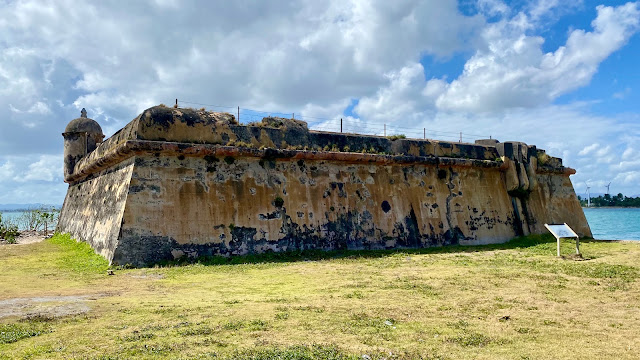 We always thought we would have people come visit us in faraway places when we were cruising... and while some did... most did not.  Seems like the beautiful and alluring Isla del Encanto is a MUCH bigger draw, and my "Other People's Vacation Pics" posts are growing once again as we welcome our friends from Texas!  We met Cheri and Alan while cruising, and it seems like the people we met "out there" hold an extra special place in our hearts.  These two are right up there, so we are beyond excited to show them OUR island! 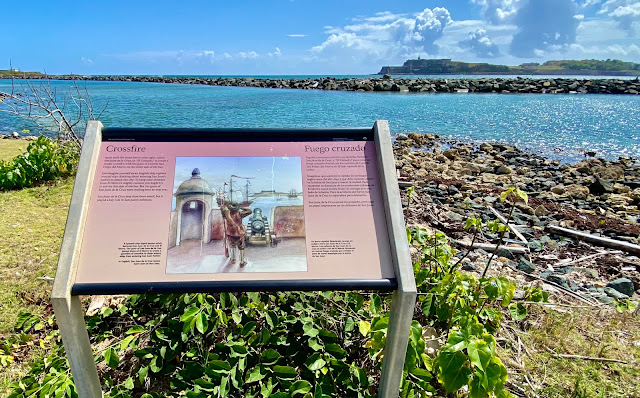 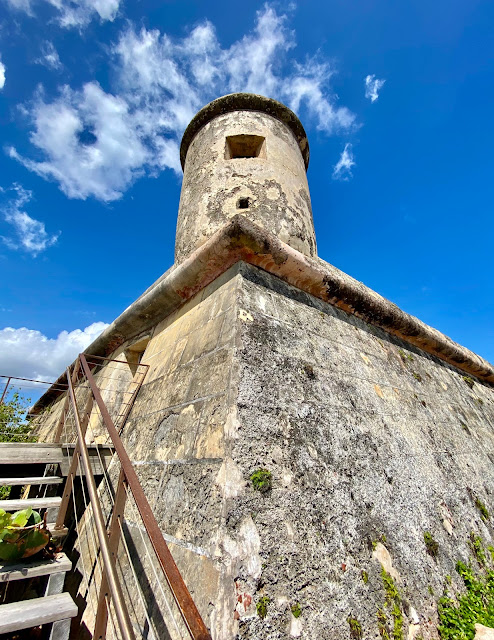 After spending a couple of days on their own in El Viejo San Juan, we picked them up and started our own Staycation with a quick stop at Fortin San Juan de la Cruz, locally known as El Cañuelo. This small fort is part of San Juan's protection from seagoing threats.  It stands on a rocky islet at the far side of the entrance to the harbor. It was originally a stand-alone islet, until some time after 1986 when Isla de Cabras was expanded to incorporate Isla Cañuela, and it is now easily accessible by car via a causeway.  We've stopped here before, but it was not open to visitors at the time.  Today, we were able to walk around and take a look!  We didn't see all of the sites here today, because some are still closed, so we will have to come back when things are completely open, post Pandemic! 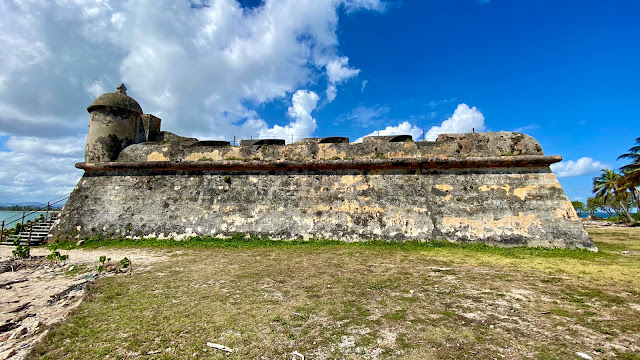 Our next stop was a small bakery where we picked up some sandwiches to take down the road to one of the most beautiful and unusual spots on the island.  Mar Chiquita is a small "bowl" of crystal waters, lined by a rim of sandstone, followed by a crescent of white sand, and topped off by a row of shady palms and sea grape trees.  The two sandstone walls that keep the Atlantic at bay have been honed to sharp spikes by the ocean.  A small opening between the walls allows you to catch a glimpse of the waves as they are broken by the walls, and only a much more tame version is granted entry to this serene little slice of sunny heaven!

We sat beneath a seagrape canopy and ate our lunch, sharing with one large Puerto Rican Ameiva that scavenged for bread crumbs at Alan's feet.  Then it was time for a short sea glass hunt walk around the rocky shore where we could get a better look at the keyhole entrance and those big waves! 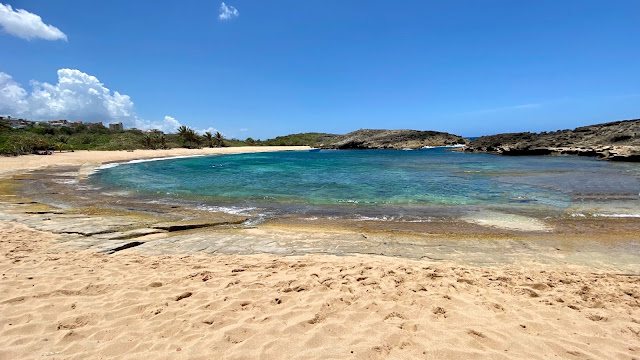 Well, of course I've got a full agenda, and time was pressing us onward.  We headed off to our appointment with the fine young people over at Cueva Ventana.  We put on our hard hats, and waited for the rest of our group to form, then began the climb along a slightly muddy pathway to the cave entrance.
I've visited this cave before, but Cheri and Alan haven't, so it was fun to see it again.  I'm happy to say that it hasn't changed!  But, there is a new exhibit due to open in the summer, and it looks like it might be a reason to return soon! 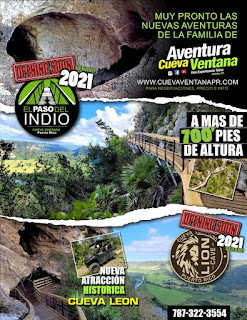 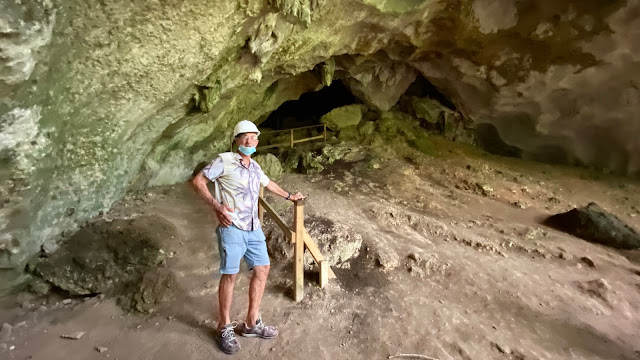 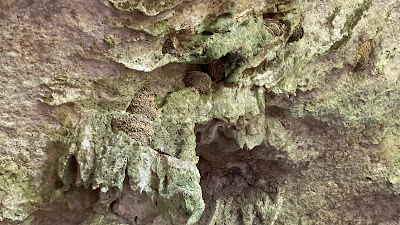 We all congregated in the cavernous entrance of the cave, and learned a little bit about the history of the place.  There are Golondrinas (barn swallows) flying in from outside, bringing nesting materials and food to their babies.  The nests are built in recesses in the ceiling of the cave, and look like mud balls mushed together to form a cup. The birds just stared at us from above...
We could see pretty well as we followed the trail into the cave.  It was a little treacherous, with uneven terrain, and lots of huge roots criss-crossing the walkway. We stopped to see one of the petroglyphs carved into the walls of the cave. 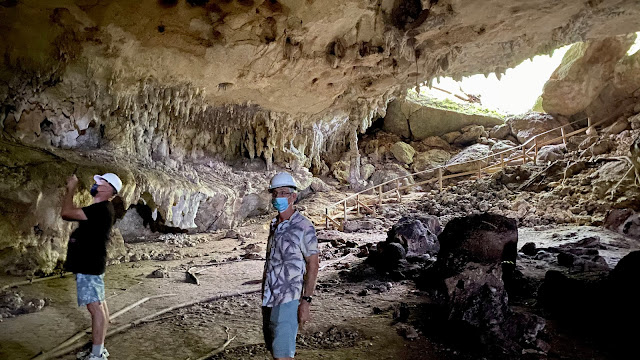 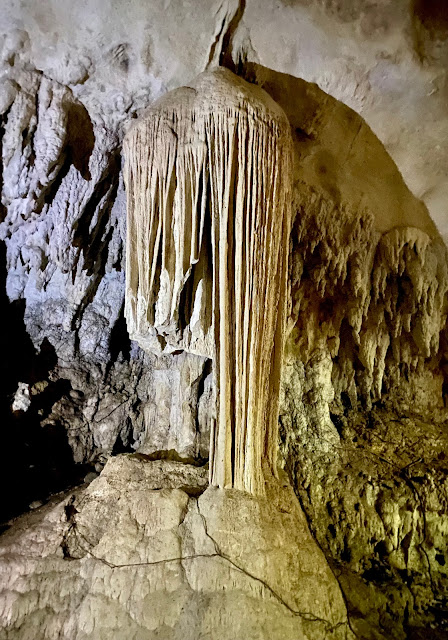 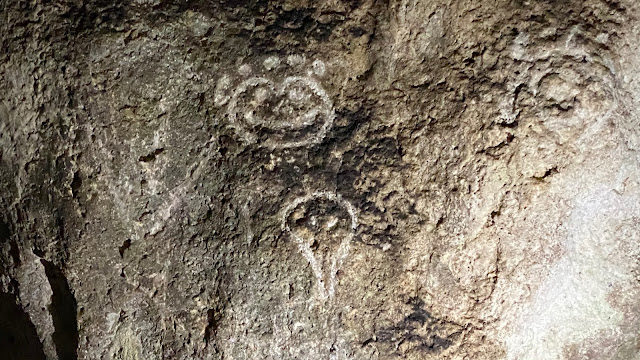 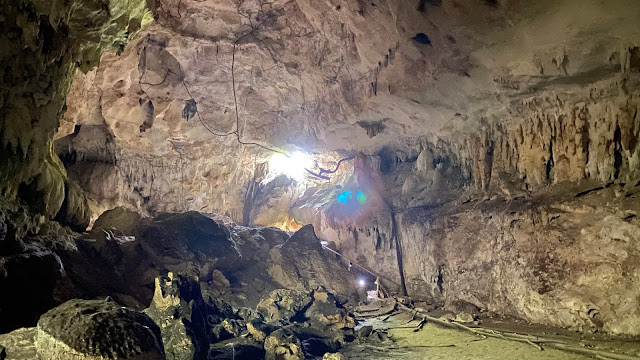 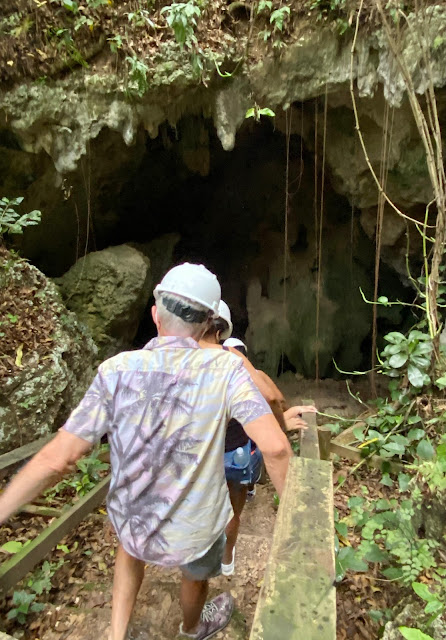 We made our way slowly to the opposite end of the cave, and climbed the stairway to emerge into a light rain. There seemed to be no notice given to the fact that we were all getting rained on... and it was kind of refreshing!
The pathway led us down into a second enormous cave opening, where it was very dark.  Flashlights were handed out to couples, and Bruce took charge of lighting our way.
We were instructed to keep the lights pointed downward, and to keep our voices low as well so as not to disturb the bats sleeping in the ceiling.
We could hear their little sounds if we were quiet, and the smell of their guano permeated the air, making the masks we were wearing very beneficial! Honestly, it wouldn't be a bad smell... if I didn't know what it was! 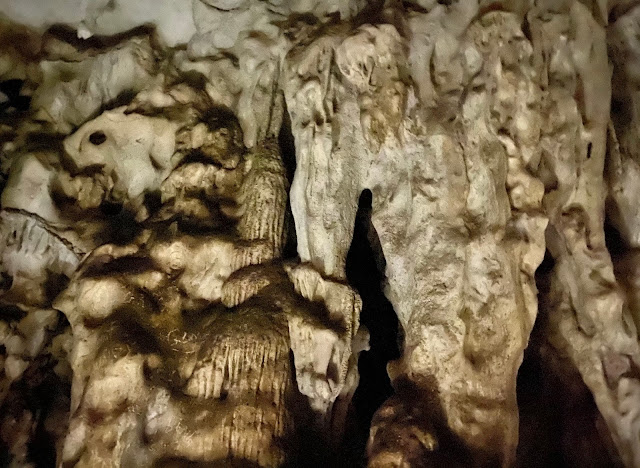 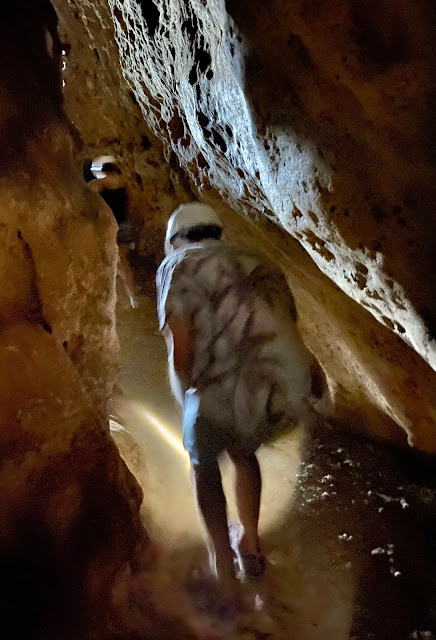 We had to duck through a narrow spot on our way to the window chamber, where we saw the opening that gives this cave its name.

We spent some ten minutes taking photos and looking around.  Sebastian pointed out a small hole in the ceiling where you could just barely see the skin of a boa constrictor!  He said she is often seen here, and I couldn't believe he found her... but I guess he knows where to look! 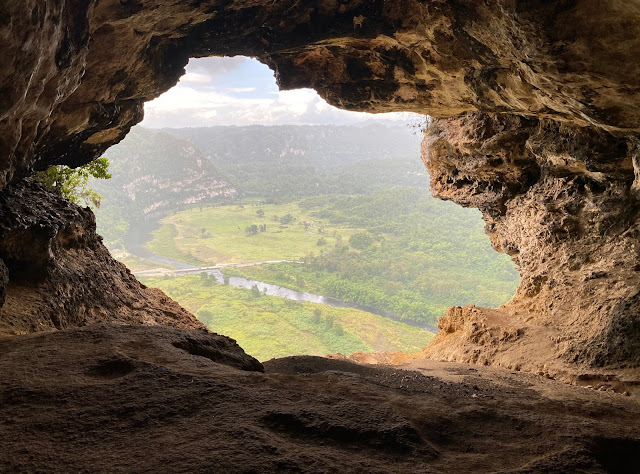 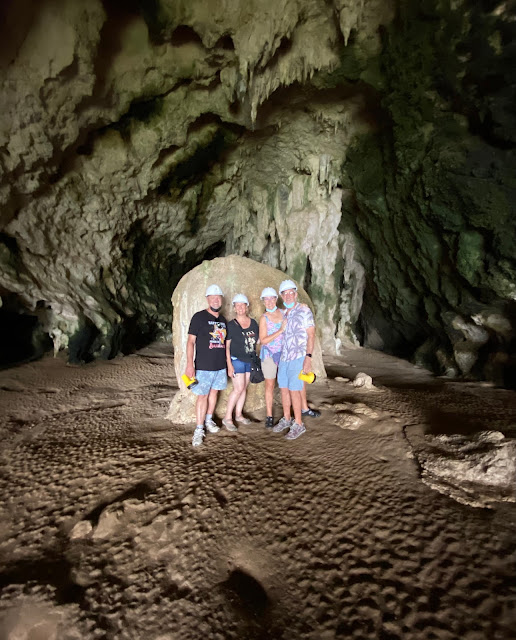 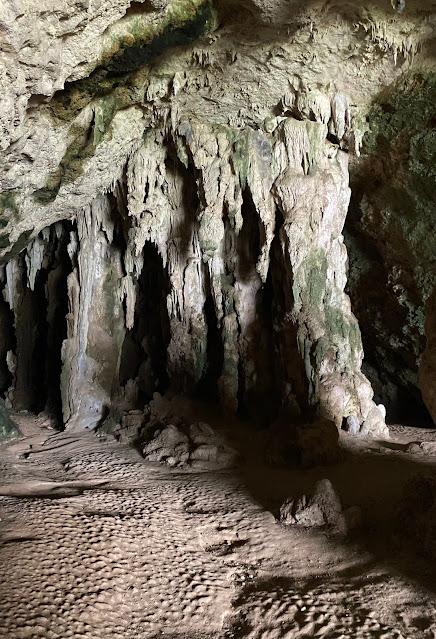 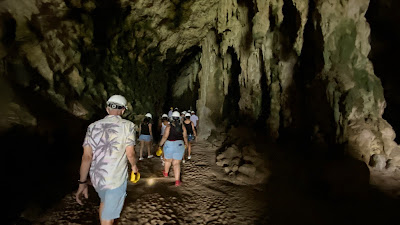 Once we had all seen the view and had our photo ops, we retraced our steps into the bat cave, and up the exit stairs.  It was still raining, and a little slick, but we all made it out with  no mishaps... 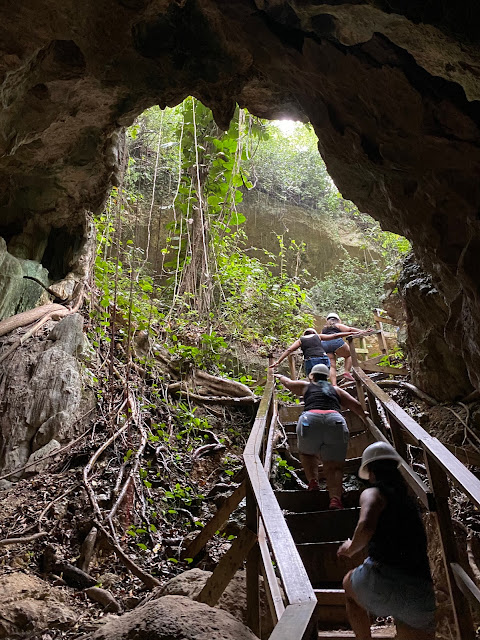 We tromped back to the car in the rain, with drops dripping off the brim of my hardhat!  It was kind of fun, and the rain brought out some amazing forest scents! 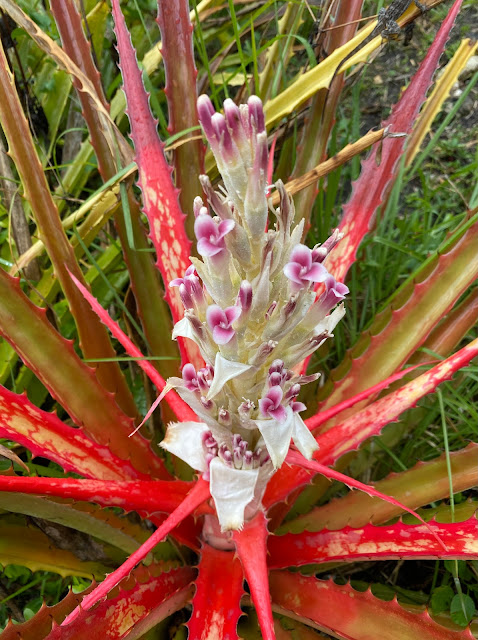 Leaving the cave, we made the final leg of our journey for today, ending with a very pleasant welcome cocktail on our very own veranda overlooking the Atlantic ocean. We rented this great B&B from Bryan, with whom we've stayed before, only at a different location.  We like this place WAY better than the previous place, and it is right on the beach.
We settled in and relaxed to the sound of the waves crashing on the shore, and birdsong.  Ahhh... Welcome to my Island! 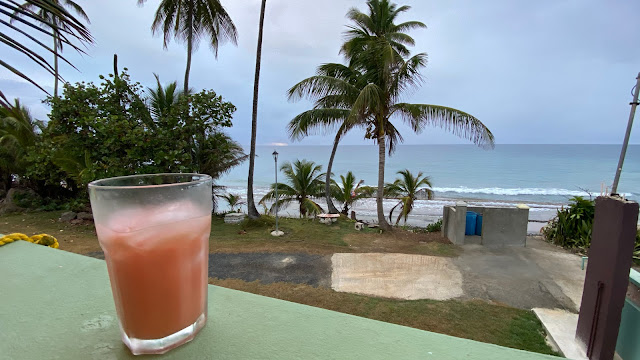