Say what?  Yeah, I know!!  So, we were running some errands, working on another thing that I'll post about soon... when we found ourselves with some time to kill in the little town of Las Piedras.  A quick consult with the Google Maps and I added yet another bubble on my overcrowded map of awesomeness!

One of the things I love most about this island, is that there are SO. MANY. talented artists working all over the island.  Many of them are giving their time and talents freely, to improve many of the marginalized areas of the island.  Using only paint, and their boundless imagination, they are transforming places that were once eyesores, into assets for the people in these small towns. 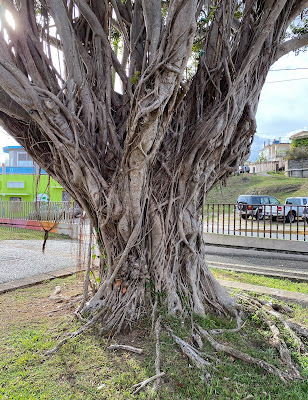 Hang out with me for a bit, and walk through Macromural Pintalto Las Piedras !  We parked across from a small plaza, where we found a few benches and some Indian Laurel trees that are struggling to come back after the hurricanes of 2017. There's an old building called Casa Alcalde, Mayor's house, right on the square, and a pretty little church next door.  If these had been the only attractions to see here, I would have gone away happy.  But there was MUCH more! 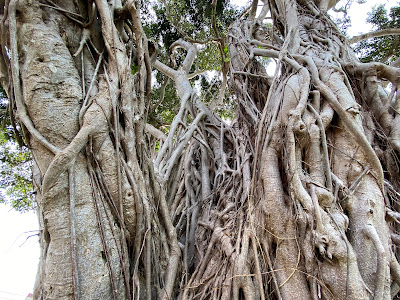 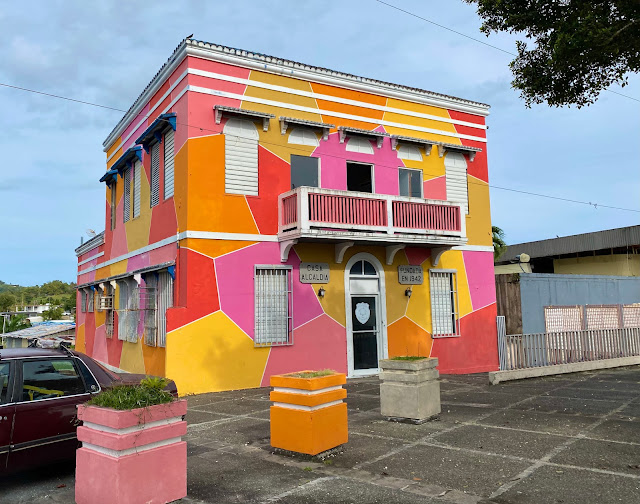 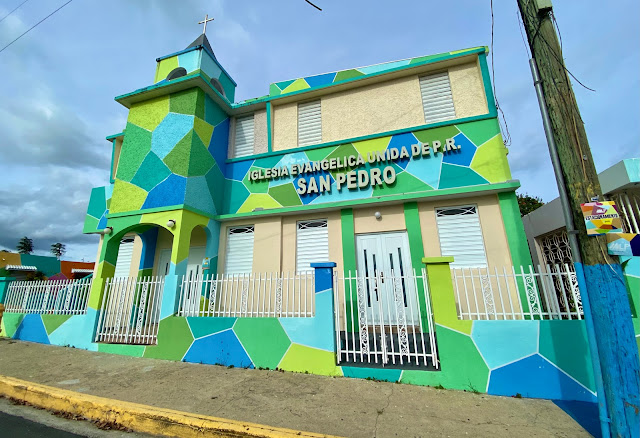 We walked up the narrow street between houses so quaint and brightly colored, you might think you're in an amusement park.  While some people might not appreciate this, I think it must be hard to be down about things if you live in this joyous place! 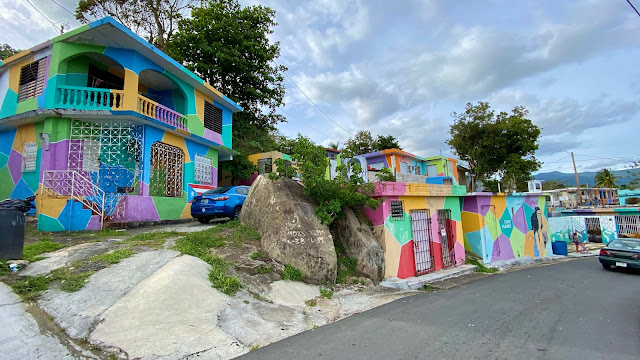 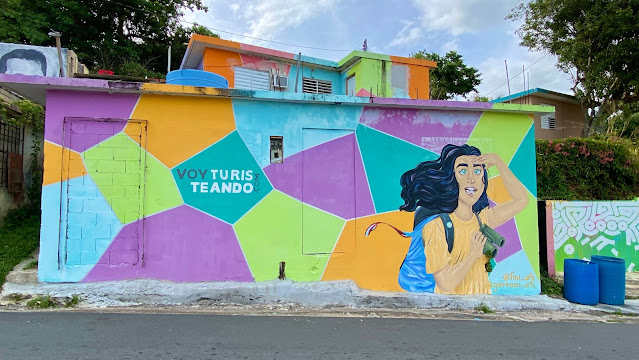 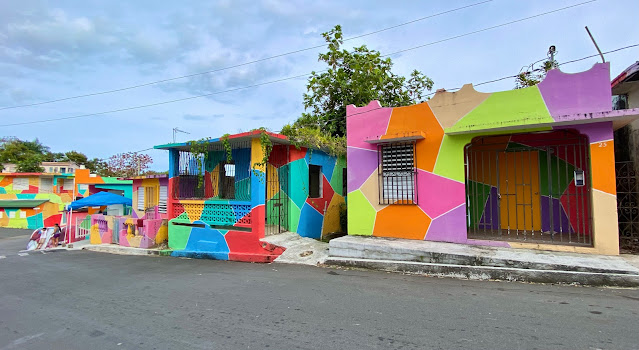 We walked along, marveling and snapping photo after photo.  I spoke to a woman who was sitting on a doorstep, asking her if that was her home.  She shook her head and pointed across the street, saying THAT one was hers.  When I turned my head and my mind had enough time to make sense of what I was seeing... I was stopped in my tracks. 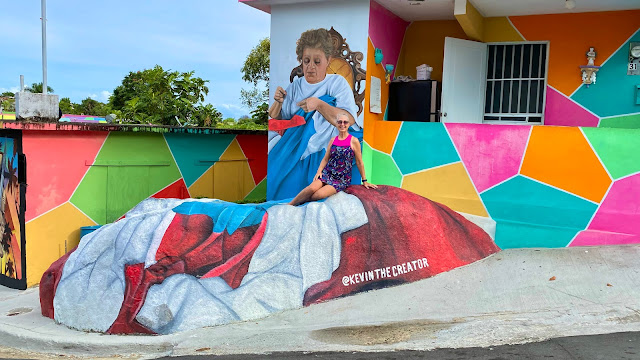 The woman in the painting is sewing a Puerto Rican flag.  The flag flows off of her lap and billows into a pile at her feet, but it's three dimensional!  A huge boulder that rises from the concrete, is painted to depict the fluffy pile of flag material at the woman's feet!
I used every word of praise that I know in Spanish, but I'm sure my face spoke for me as the woman crossed her arms over her heart and bowed her head in humble appreciation of my effusive Spanglish babbling.
When she saw us taking photos, she invited me to climb up, and even showed me the easy way around the back.  @kevinthecreator, you ROCK!  I'm just speechless!  My respect for these talented artists knows no bounds. 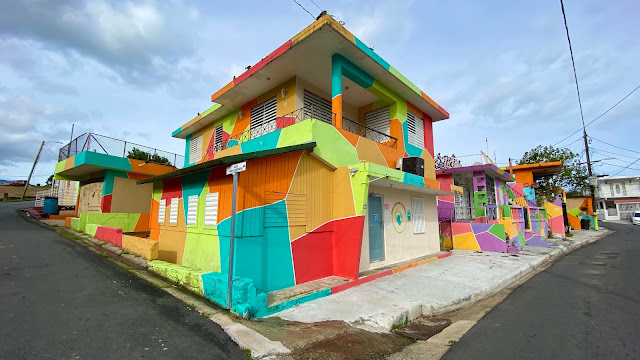 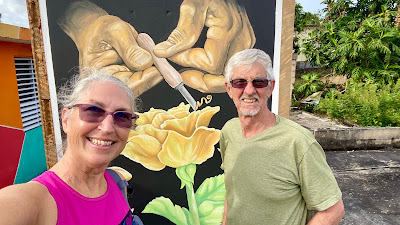 We eventually took enough pictures of that one, and continued on.  The nice woman made sure we knew that it was perfectly OK to go up (sube) the steep and crumbling stairway that led to the roof of one of the houses, so that we could get a closer look at the mural up there... and also of the sweeping panorama of the town from above. 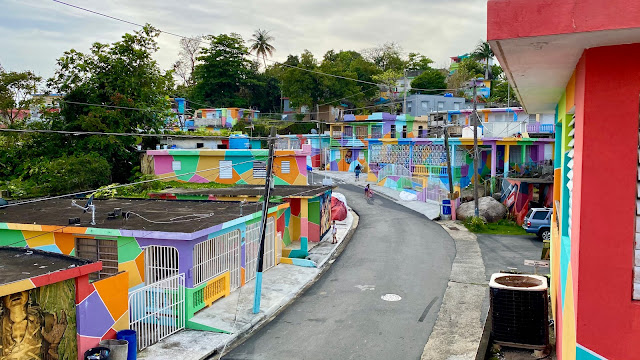 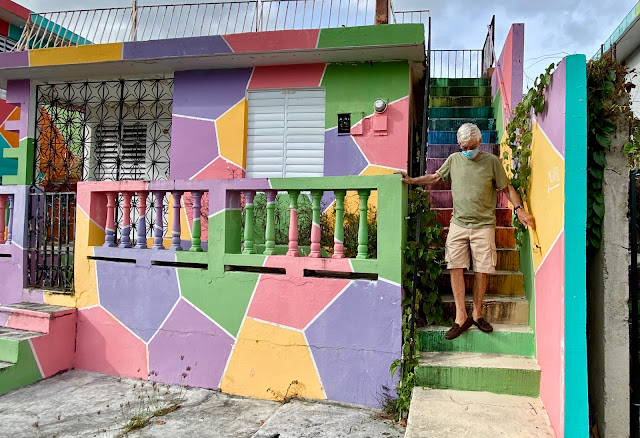 Thinking we had reached the end, I peered down the side streets to see if the awesomeness had spilled out into the rest of the neighborhood...
Turns out, walking down the way, there were several murals we missed, that going the other way... we have found! 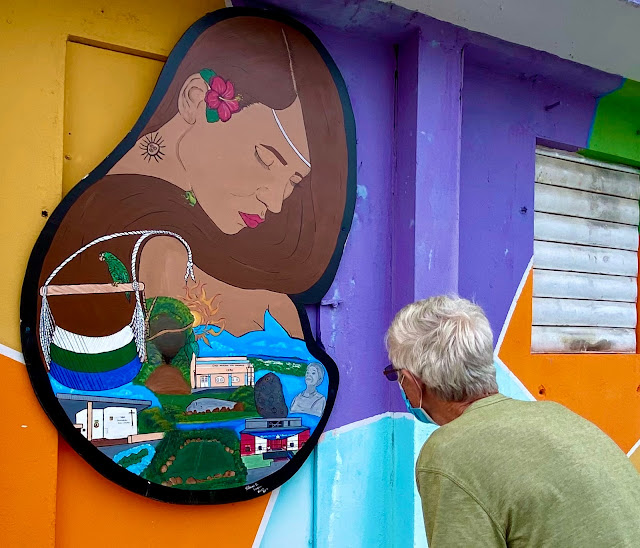 Turns out that the reason I never knew this was here, is because it was inaugurated in December, 2019, so it hasn't been like this for very long.  There are 35 houses in all painted, and 14 murals.  I'm not sure we saw them all... so maybe we'll have to buzz back through soon!
There are four of these sites here in Puerto Rico.  We have now seen three of them. This one is smaller than the other two we've seen, and a much easier walk.  So if you find yourself in the eastern side of the island, pop over for a look!