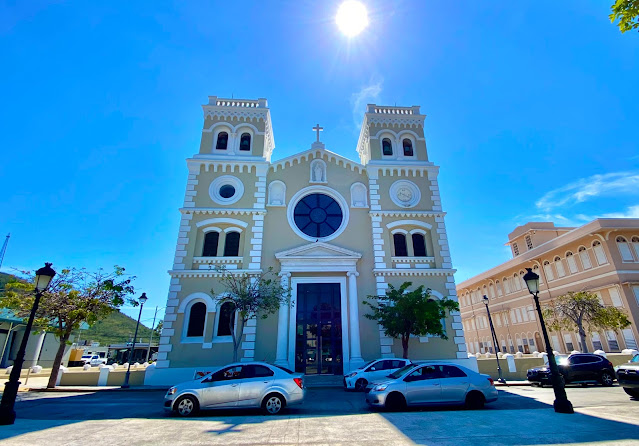 We were dressed in our hiking clothes, complete with walking sticks... waiting in the Plaza de Recreo Cristobal Colón... but the guy we were supposed to meet up with for our hike didn't show up!  So NOW WHAT?? 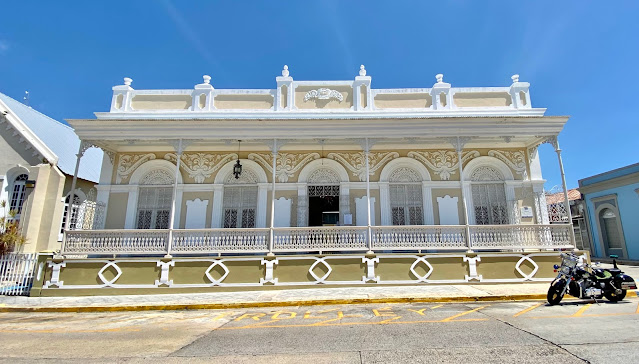 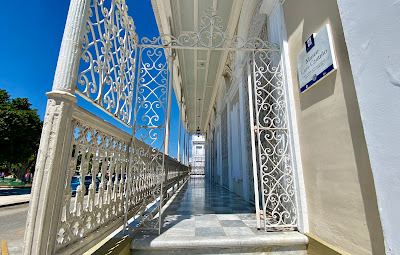 I looked around the Plaza, and noticed that this beautiful house that has been converted into a museum looked like it might be open today!  Finally, we get to take a look inside of this impressive piece of history that we've been curious about for so long. 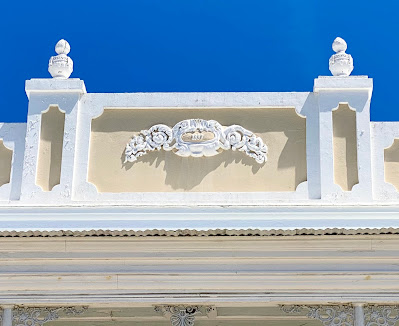 Museo Casa Cautiño was finished in 1887.  It has been maintained for all to enjoy, free of charge, by the Municipal Government of Guayama.  This is another of the amazing things to see and do in Puerto Rico for FREE!! 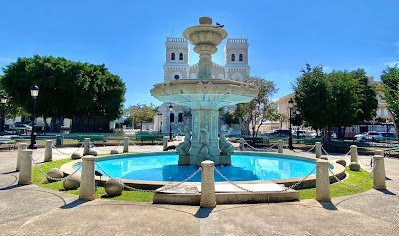 But first, outside in the center of the Plaza, there is a beautiful fountain that was brought from France, and gifted to the people of Guayama by a Cautiño

I have enjoyed it many times, but never knew its origin!

When we first started our tour, our guide couldn't hide her surprise when we told her that we live in Arroyo.  I was in full on Spanish mode, trying my best to communicate in Spanish, and doing well enough.  She began the tour in Spanish, and listened while I translated what I thought she said, to Bruce.  I apologized that my Spanish wasn't so great, but that I was learning... and after a brief lecture on the importance of learning the language of my adopted home, she warmed up and pretty much switched to English for the duration of the tour.  It pays to give it a try! And, it was still a learning experience for both of us, because she didn't know all of the words in English, and I knew a lot of the words in Spanish!
So, this house was commissioned to be built by a wealthy Colonel and businessman, Genaro Cautiño Vasquez, for his wife. Born in Spain, Cataño came to Puerto Rico to build his fortune in the sugar trade after leaving the Spanish Army.  He became a leader of the town of Guayama, and his descendants have now donated the house for all to enjoy. 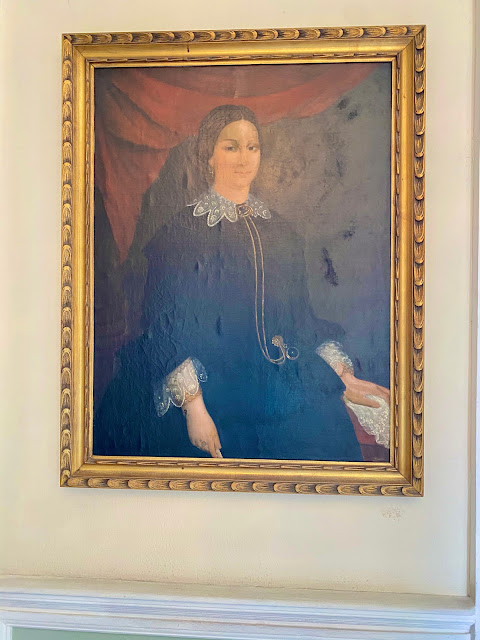 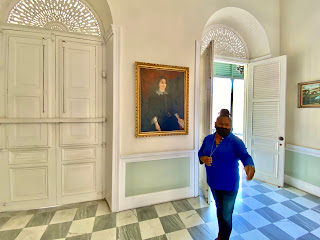 Outside of the Master's suite, there is a hallway that opens onto the internal courtyard, that contains the family portraits.  There are portraits of Cautiño and his wife Genoveva, on one wall, and a larger painting of Cautiño's mother, Juana Montserrat Cautiño Castaños.  She has the place of honor in the home, and her memory is further honored by the two items hanging on the wall across from her portrait. 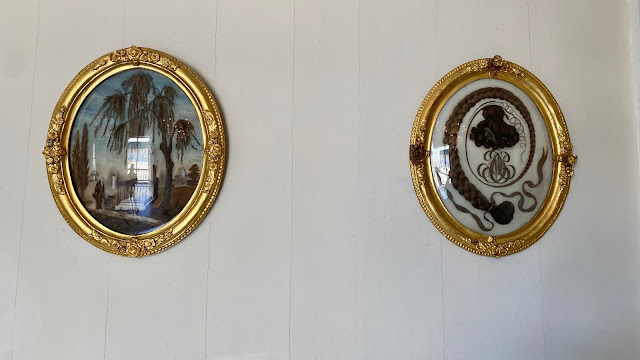 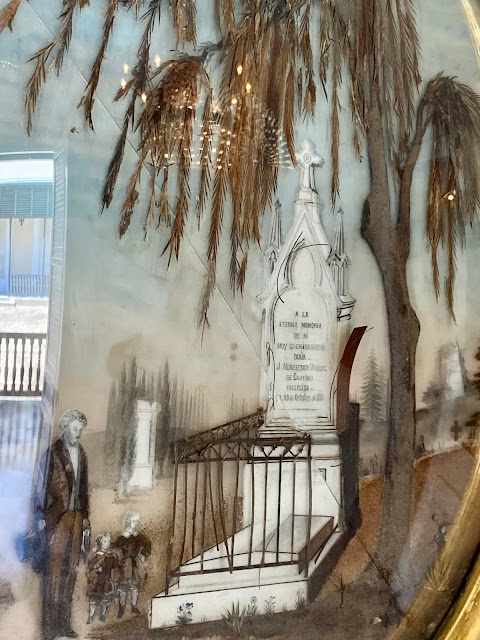 The piece on the left is a delicate work of art, created in very fine pieces of wood, that depicts the burial site of La Montserrat.  The item on the right is the woman's braid, and some decorative pieces that were also made of her own hair.  Yeah.  I know! 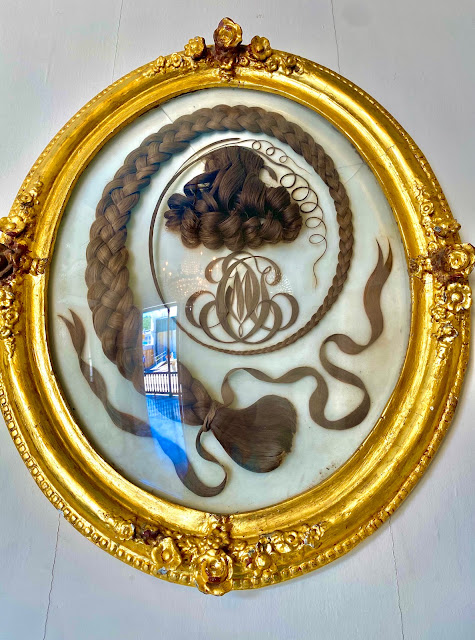 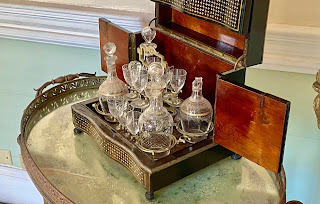 Across the hall from the master's quarters, there is the formal dining room.  There is a delicate decanter set that looks as if a breath could shatter the thin crystal. 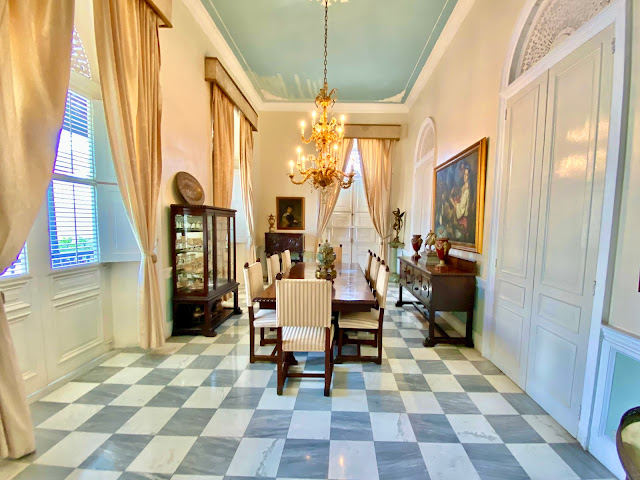 Notice that there are tall doors and windows on every external side of these rooms, as well as between the rooms.  The entire house can be opened to let in whatever breeze finds its way to the plaza in the center of town.  I'm sure it isn't much! 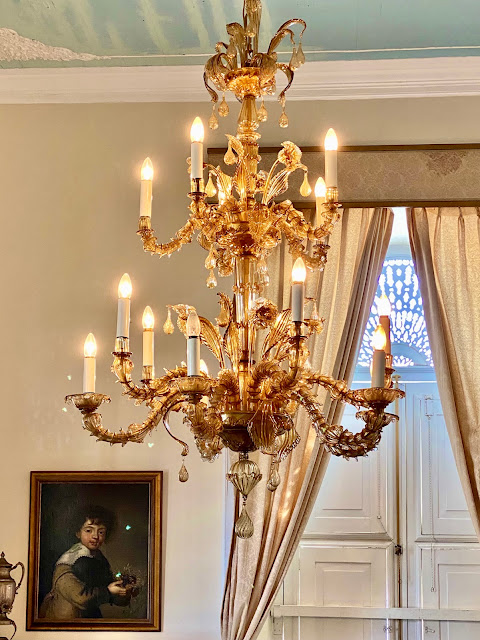 The most breathtaking piece, in my opinion, is the chandelier that hangs above the dining table.  At first glance, it's just another chandelier that has been converted to electric light.  But on closer inspection, you will see that it is made of hand blown glass.  My photos do not do it justice, as it is a truly magnificent and priceless piece of art, that I'm sure is unequalled in today's world. 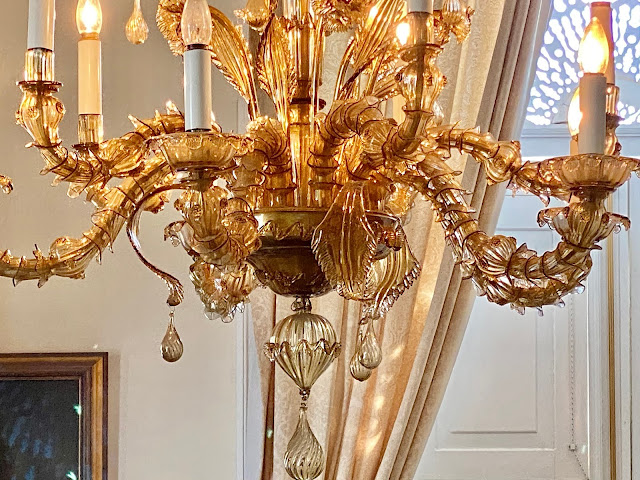 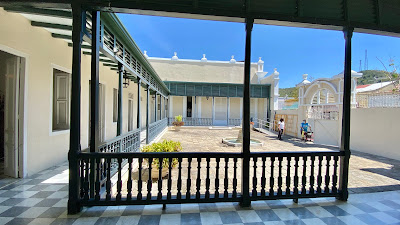 Tearing myself away from the chandelier, we moved on out onto the terrazzo that surrounds the internal courtyard, where a small water fountain bubbles away merrily, much to the enjoyment of the Changos.

More tall double doors lead to the "lesser" rooms of the house.  Here we found the guest rooms, the kitchen and baños! 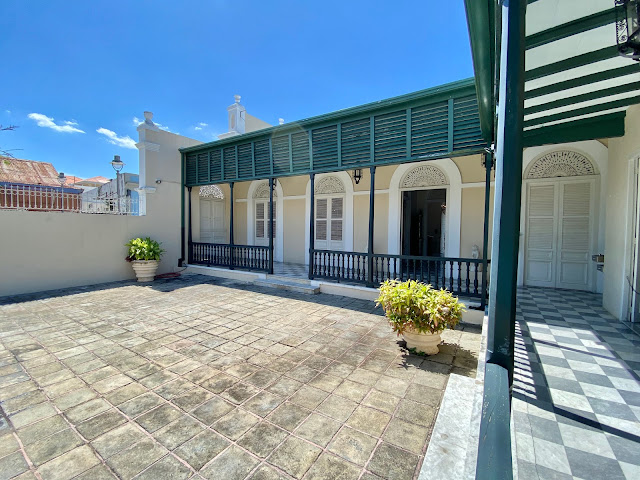 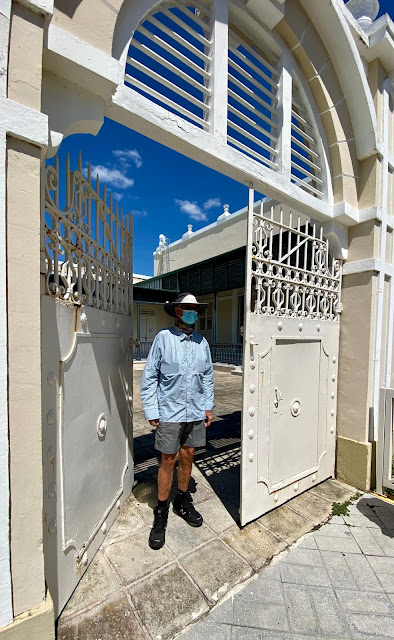 Standing on that terraza, looking around the inner courtyard, we could almost conjure up a vision of what life must have been like in the 1800s and early 1900s when this house was in use.  A stray dog ducked in through the half opened gate, and after a glance in our direction, proceeded to the fountain for a cool drink of water. Life must have been very slow back then.  To tell you the truth, life isn't that much less slow for us now, here in our little town in Puerto Rico!
We waited while our hostess went into a room along the back wing of the house.  Those rooms are now used for offices and storage, so we didn't tour them. She returned with a bag of goodies for us!  SWEET!  Not only is this tour free... but they give us treats as well!
That concludes the tour of this beautiful bit of history that lies right under our noses here in Guayama.  If you come here, it's worth a look if you've got a bit of extra time.

This is a translation of what's in the pamphlet they gave us:

There are houses that have lived a long time, that their presence speaks to us ... they tell us stories, experiences, and lifestyles of their occupants and the people. Would you like to know one of them? Well, today he is at Casa Cautiño in Guayama.

In the Plaza de Guayama, one of the most beautiful on the island, you can see the fountain brought from France, a gift from a Cautiño to the town and in front of it, majestic and stately, the residence of the Cautiño family. This was ordered to be built for Mrs. Genoveva Insúa Villar by her husband, the colonel of the Spanish Army, Mr. Genaro Cautiño Vásquez, was a Municipal Judge, Mayor and landowner of the time, based in the Guamaní Valley.

The house impresses with its highly ornate architecture, it was designed by the Guayamés architect Manuel Texidor, a graduate of the Academy of Fine Arts in Paris. Completed in 1887, in its design certain features of neoclassicism were combined, with details, of the best taste of the Creole architecture of the southern area of ​​Puerto Rico, predominant at the time.

On the tour of this house you will notice belongings of the 3 Cautiño generations that enabled this residence. The House consists of an entrance hall, living room, dining room, master bedroom, two additional bedrooms, dressing room and interior balcony in the shape of an elongated "U". On the central side of the patio, there is the guest room, kitchen, toilet, warehouse and public toilets (formerly laundry room and warehouse).

This is attested by the marble floors, the latticework, the metallic monograms, and other exquisite wrought iron work. The most noble woods of the country were used in the details of the construction of the house and, in addition, the exquisite wrought iron work stands out, a fact that is attested by the beams and balusters of the terrace made in ausubo and the roof of the house in white mahogany.

In the regal mansion, as the Gran Enciclopedia de Puerto Rico (1976) cites, in its volume IX on architecture, we are told about the furniture, specially designed for Monserrate Bruno Domínguez by the Ledée family of cabinetmakers, a renowned strain of Guayamese artisans, They used the best woods to build wardrobes, beds, dressers, tables and many other precious pieces. Since its first owner, each generation of the Cautiño family has contributed the best to the house, which over the years has been enriching its content with works of art and valuable pieces, such as Sevres ceramics, rock crystal prism lamps. , marble tables, "cloisonne" vases (the largest in the country), gilt bronze clocks, Victorian mirrors, gilt bronze wall sconces, antique and contemporary paintings, marble amphoras, and above all, the oil paintings of the family founders.

Today, more than a century after it was built, we can enjoy everything that this house contains, thanks to I.C.P. he turned it into a museum administered by the Municipal Government of Guayama.