A Week In The Abacos - Hope Town

Although the wind forecast was light, the precipitation expected was heavy.  This translated in my mind to making sure we were secure in a spot where we could still have some fun, regardless of the weather.  Hope Town is that spot.

We motored from Tahiti Beach to the 360° protection of Hope Town's mooring basin on the early morning high tide.  I was concerned about the depths coming in but with a little tidal help, we were fine. 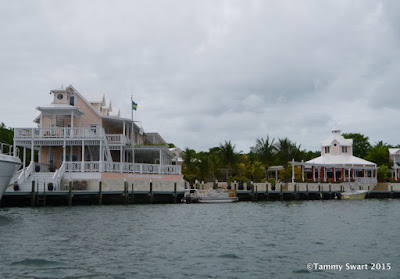 We had been advised that there were many moorings to be had, but only certain colors were owned by the Hope Town Marina, which also gave access to the beautiful marina facilities.

We found a primo spot and picked up a green mooring, but when we went to check in, we were told that green wasn't one of the marina's balls.  Soooo... 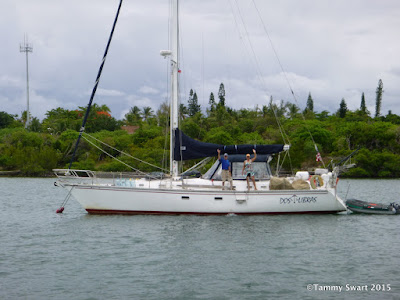 Bruce and I left Brittney on shore and went back to the boat to hastily move to either a red or blue mooring, before the other guys could come out and try to charge us for their ball...  We made it and found another lucky primo spot just right outside the marina.  SCORE!!! 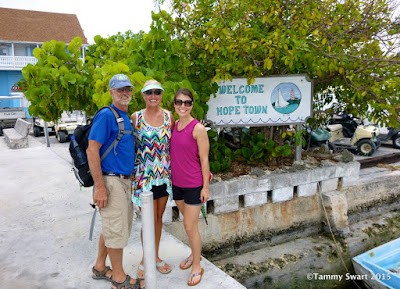 Hope Town is a small town on Elbow Cay in the Abacos.  The town is inhabited by about 300 people, conspicuously mostly white.  Golf carts are the preferred vehicle on the Cay but none are allowed within the tiny town, only bicycle and foot traffic, but golf carts and small automobiles can be found outside the town proper.

This quaint little town is as cute as a button and although it is similar in many ways to Man-O-War Cay, the similarity stops at the welcoming attitude of the people here, which was woefully absent on MOW. 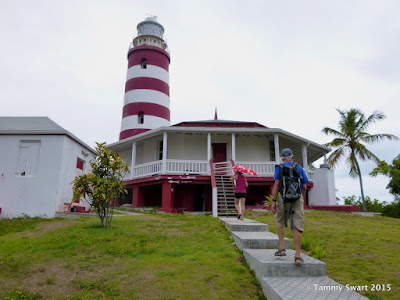 A Must-See here in Hope Town is the Elbow Cay Lighthouse.  One of the things we love about the Bahamas is that you can visit places like this with relatively little governmental restrictions.  There are no long lines, no roped off parts, you can just go and climb on up. 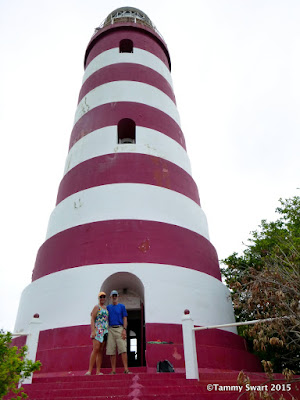 The lighthouse is only a short hike from the marina on mostly sand roads and through the brush.  The lighthouse dates back to 1863 and is still using kerosene and a hand-wound mechanism to make the prism turn. 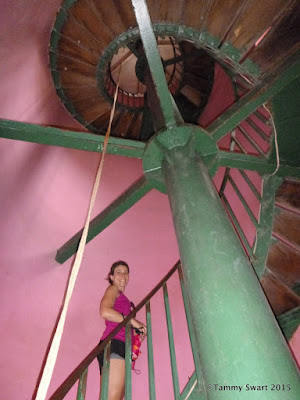 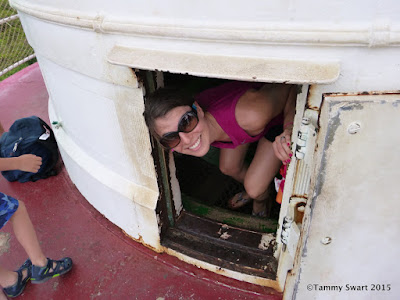 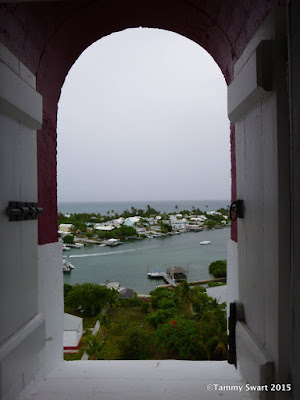 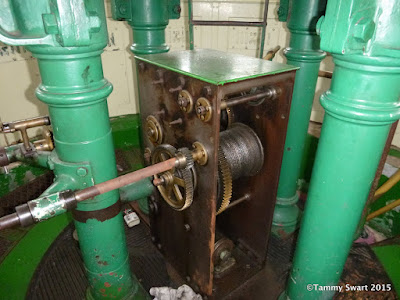 There are tours you can take which allow you to climb up the tower near sundown with the Lighthouse Keeper to watch him carry up the Kerosene and wind the mechanism.  We didn't take the tour, but maybe next time! 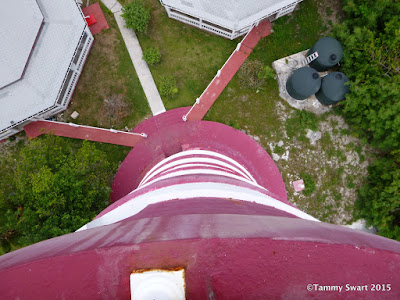 The view is, of course, breathtaking, even on this cloudy day.  I'm always a little nervous about climbing rickety stairways that have withstood (hopefully) the passage of time.  Looking directly down from the top is never an option for me...  But the camera can do it.

After the lighthouse, we took a little walk around town.  The homes here are all so very cute and colorful... and very nicely kept.  The landscaping is all lushly tropical with a riot of flowers growing everywhere. 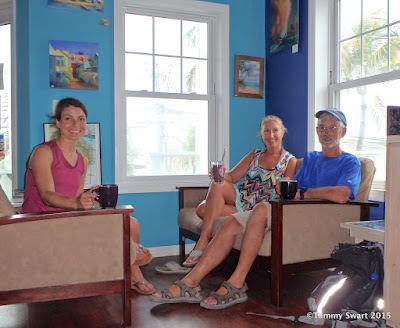 With Brittney still struggling a bit from the time differential, we stopped for a pick-me-up from the local coffee shop.  No Starbucks on Elbow Cay... but this place brewed up a fabulous hot coffee for Bruce and Brittney, and I got probably the best frozen coffee concoction I've ever had.  We waited out a passing rain shower in cozy contentment. 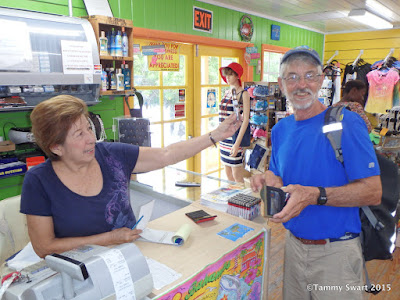 Our next stop was a nod to our "tourist" daughter... a small souvenir shop lured us in with their colorful wares.  Ironically, only Bruce bought something!  A cigar!  Supposedly Cuban... but for the price he paid, most probably not Cuban.  But Bruce doesn't know the difference so he was happy. 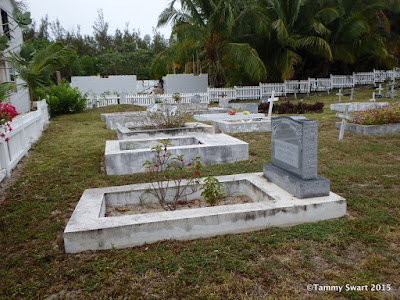 We continued on through the soggy streets.  We spent some minutes exploring the small cemetery near the Atlantic coast.  If you're a long time reader here, you'll know that we love poking about in cemeteries, looking for really old graves or stories sometimes found there.  This cemetery is pretty active and held no marked old graves that we could see.  There must be more on the island... 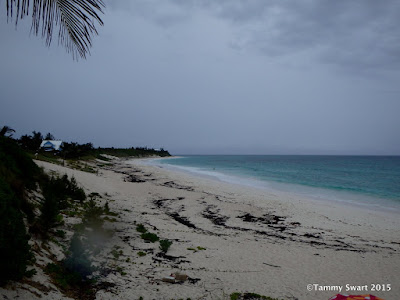 Just up the hill past the cemetery, we suddenly popped out on the Atlantic side of the Cay.  The dull grey skies provided stark contrast to the still impossibly blue and turquoise shades of the water.

We continued exploring... bouncing our way along the coast for more visions... 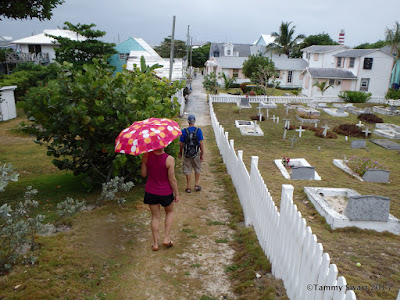 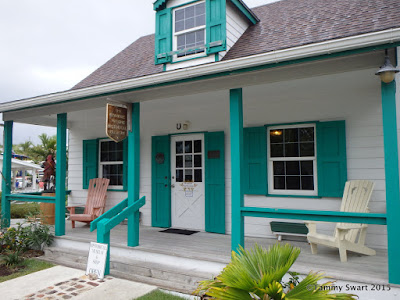 Next up, we happened upon the Wyannie Malone Historical Museum.  The museum is another must-do in Hope Town if you're interested in stories from the past of the people and places in the Bahamas. 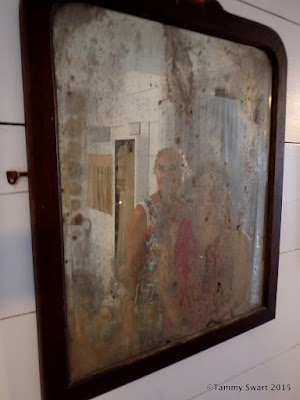 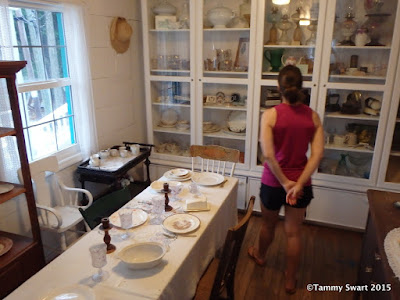 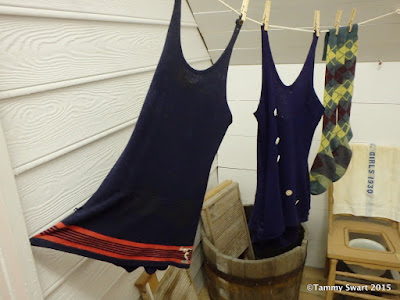 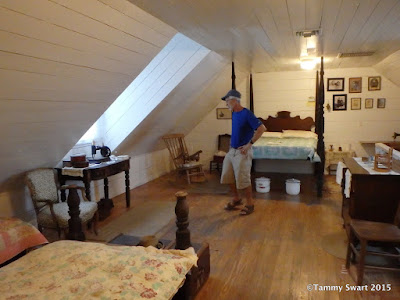 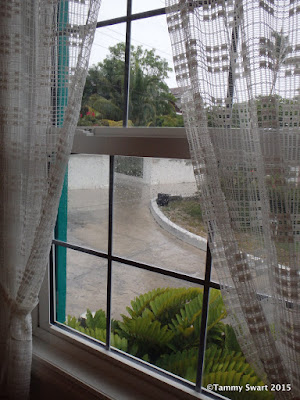 We entertained ourselves with bygone times while the skies opened up outside.  The history of the Bahamas is solidly intertwined with that of the US East Coast.  It was fascinating to hear that so much of the Carolinas history shaped the Bahamas in those years of civil unrest.

The rain let up for a bit and we made a mad dash to the boat.  Our day had been very full already and we were ready to relax and let the weather pass with a nap! 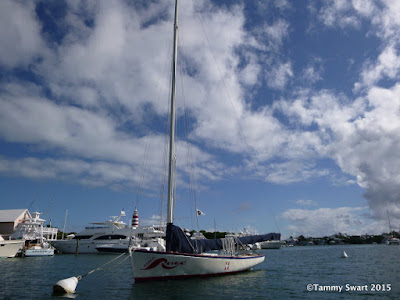 The Following day we awoke to blue skies, fluffy white clouds and... sunshine!  Hooray!  We set out to walk through the narrow streets of the town and see what there was to see.


We found the famous Abaco Rage sitting quietly hanging off a mooring... dreaming of years gone by.  She has recently been resurrected with Hope Town hoping to regain some of that bygone glory. We were amazed that this small boat could carry such a huge sail, if the height of her mast and length of her boom were any indication of sail area. 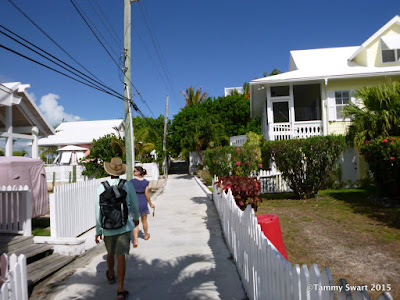 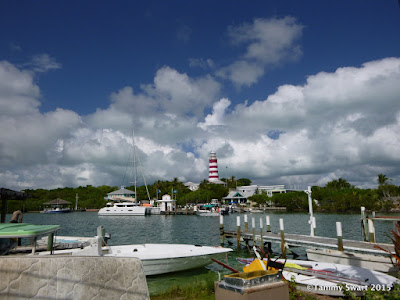 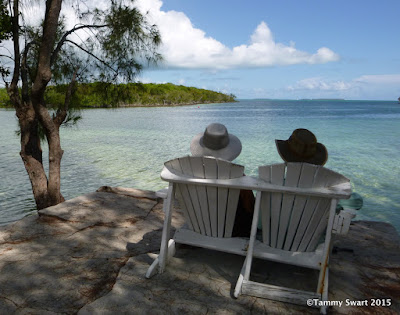 We took another walk around the town in search of a grocery store.  We had hear about the famous Vernon's Key Lime Pie but we felt we needed to judge for ourselves. 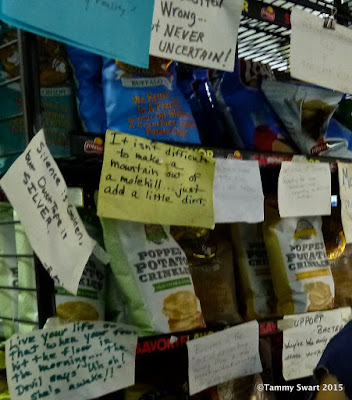 The grocery selection here is typical of the outer islands of the Abacos.  (read: not Marsh Harbour)  We found what we needed among scraps of papers and sticky notes pinned all over the store.  They had clever and sarcastic sayings of all sorts, mixed in with a few bible verses for good measure.

There were no prices on any of the groceries offered... but there was a sign that said something like "you didn't come to these islands to save money, so don't quibble over our prices" or something to that effect. 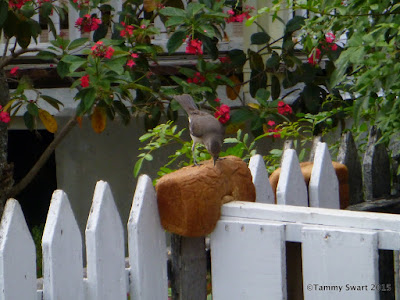 Funny guy... but we didn't find the prices out of line with other stores we've visited...  We did find that Vernon has a softer side though.  After we picked up our still-warm-from-the-oven Key Lime pie and paid for our stuff, we noticed that he was sharing the fruits of his labour with the island birds.  This fresh baked loaf of bread was set out for the wild birds to eat.  What a nice guy! 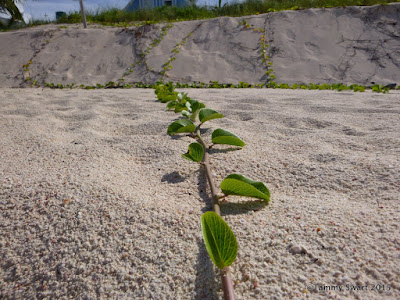 We returned our groceries to the boat and had a quick lunch.  With all of this sunshine, the beach was calling our names.  We had to get Brittney to the Atlantic for a swim! 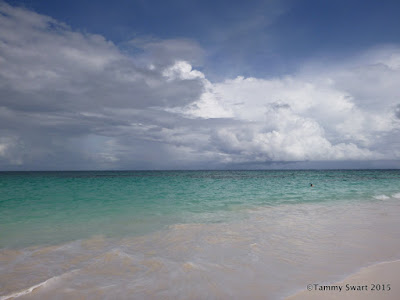 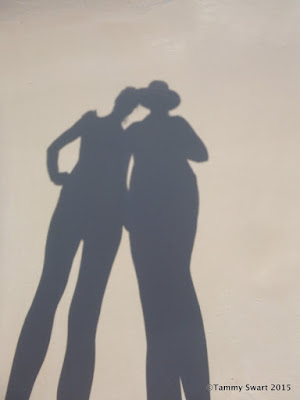 We found a spot and settled our stuff, then we had some fun!

We ended our day with a long afternoon at the pool.  The clouds returned but the rain held off with the exception of a few sprinkles.  Brittney had some quality FaceTime with her fiancé and, after consulting the weather forecast... we planned our route for the next day.  It looks like we'll get some SNORKEL TIME!!!