A Week In The Abacos - Great Guana Cay 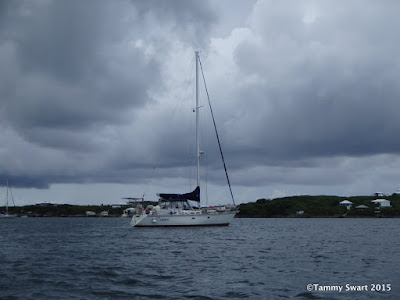 There are several nice anchorages on Great Guana Cay.  We spent some time at the northwest end of the Cay in Bakers Bay a few weeks ago hoping to check out the snorkeling on the Atlantic side of the Cay in preparation for this week with Brittney.  The weather was uncooperative then, but it looks more and more like we are going to get a break in the cloudy weather soon...

With a young person to entertain, we chose a more lively spot to anchor this time...Fishers Bay.  This puts us in close proximity to the famous Nippers and Grabbers we've heard so much about.  Now I will admit that before coming to the Abacos I had never heard of these places... but since our arrival here, it seems that almost all of the ferry services have boatloads of people going to Nippers, day and night.  I guess we've gotta see what it's all about...

We motored from MOW to Fisher's Bay and dropped our hook amongst maybe a half dozen or so other sailboats.  The anchorage is plenty roomy with only one shallow spot to be wary of.  There are mooring balls closer in but there's really no need to take one of those, the holding is good and this is a nicely protected space from winds anywhere from NE to SW.

We had been doing a pretty good job of eating healthy food on the boat to honor Brittney's healthy eating habits... but dang it! I want a meal OUT!!!  Besides... she can't leave the Bahamas without trying some of the popular traditional foods, right?  I had to make an executive decision that TODAY... we would have a meal ashore!

We dinghied around Delia's Cay and entered Settlement Harbour, a short trek that might be a wet ride had the winds been less calm.  We found a place to dock the dinghy on one of the many piers there, unsure whether or not this one was a "government dock".  But evidently it was.  There was a lot of activity there as a boat loaded up supplies and tourists.  We tied off at the shallow end thinking that if some commercial boat docked here, they wouldn't be able to get in this far... 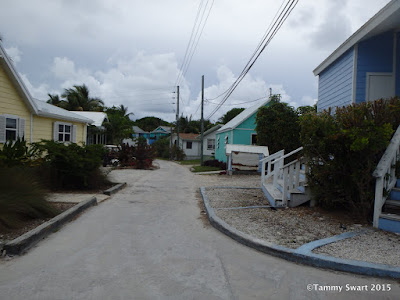 The "settlement" was pretty quiet except for a group of young people, obviously here to hang out at Nippers...  We walked the streets of town taking it all in. 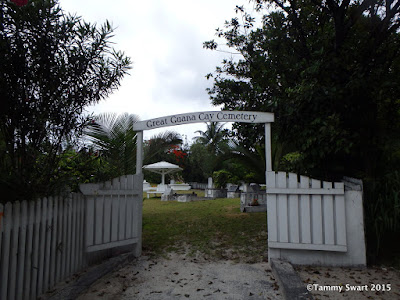 Of course we couldn't resist a quick spin through this cute little cemetery...  I love the sea glass grave!!! 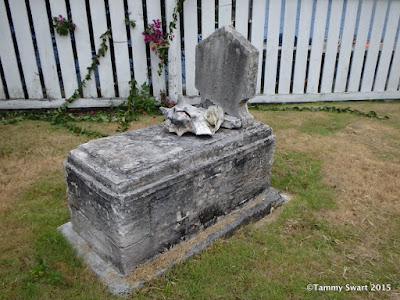 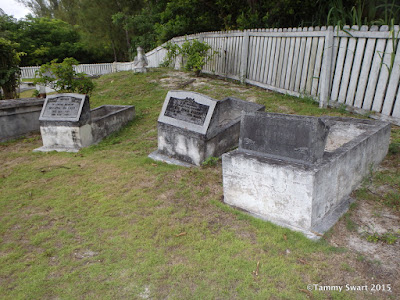 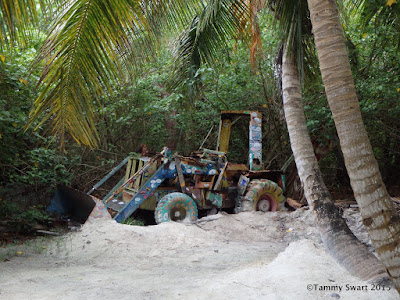 The way to Nippers is not clear, but we continued on along the sand streets until we began to see things that made us think we were going in the right direction.

We turned up a long palm-lined sandy pathway with light at the end of the tunnel... This MUST be it! 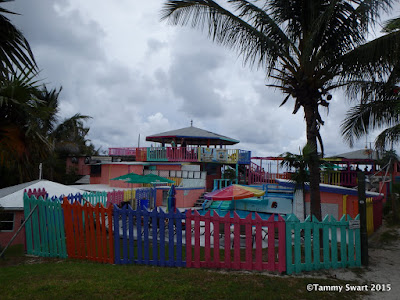 The garishly painted ramshackle vision we found was astonishing.  The fact that it was nearly deserted probably made it all the more absurd... I'm sure that if it was night time, and there were crowds of revelers... and we were drunk, this would all look very normal.


We took a quick look around the place on our way to the beach just beyond the deck and down a crooked staircase. 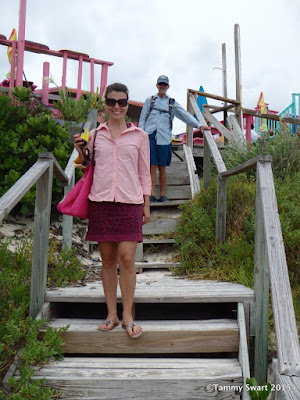 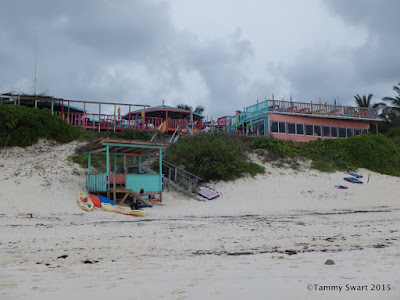 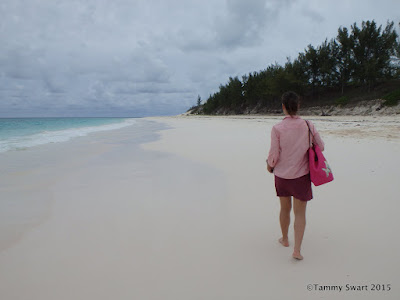 We had this gorgeous beach practically to ourselves.  We took a stroll to find a spot to sit and enjoy the multiple shades of blue that hid the treacherous reef just beyond the sand. 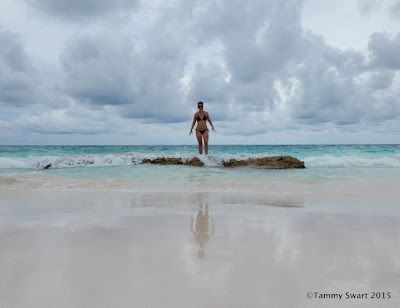 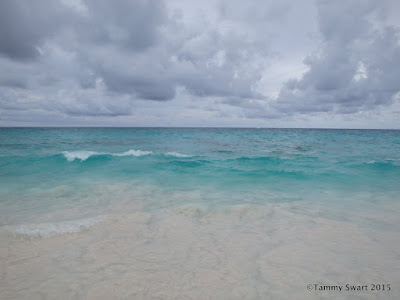 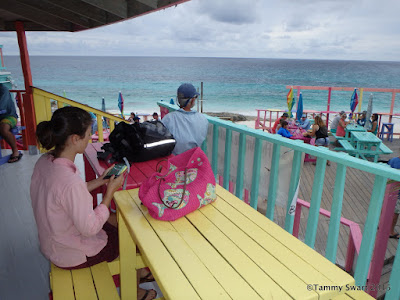 After a brief repose, flies and hunger drove us back up to Nippers to see about that meal I mentioned earlier. 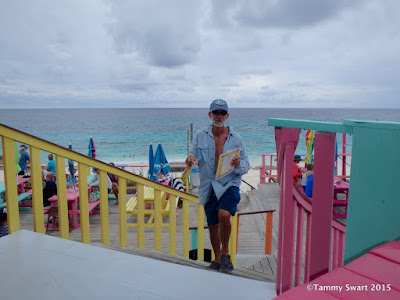 I can't say that we found the service to be stellar here as after a lengthy wait, Bruce went down to the bar and obtained some beverages for us, along with a promise to send a wait person up to take our order.

We must have looked like cheapskates... an assumption that was upheld when we ordered only one plate of Grouper Fingers with traditional Bahamian sides, between the three of us.

The food was good and the wifi was fast.  Brittney got to chat with her fiancé for a while.

After our late lunch, we stopped by the local grocery store for some dinner provisions.  Bruce and I had most of our meals planned out and purchased before Brittney arrived.  We were running low however and needed a boost.  Brittney quickly picked out a few things to supplement our onboard supplies and round out our meals for the remainder of her stay with only one more meal ashore to go.

We returned to the boat in near silence.  We had been going full out since Brittney got here.  I wanted to maximize our time and make sure she got to see and do as much as possible.  But by this time, our constant movement and lack of down time was catching up to us all.  We were just plain tired.  So the planned snorkel excursion to the spots here in our anchorage, and a trip to Grabbers just there on the beach will have to wait for next time.  We CRASHED! 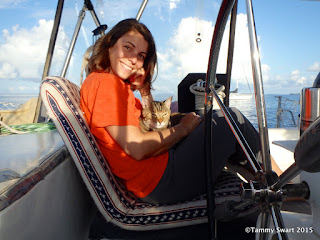 After a very early night and a solid night's sleep, we were up and ready to go again the next morning.

And guess what... The SUN was SHINING!!! The winds were nil and we were so happy.  It's amazing what a little sunshine will do to raise spirits and energy levels! 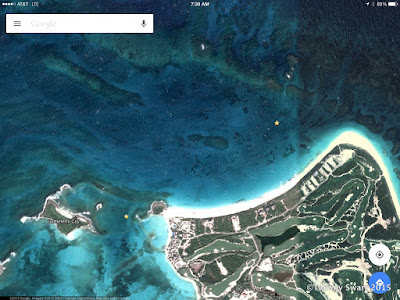 We motored around the northwest end of the Cay, taking full advantage of the settled conditions and dropped anchor between a gorgeous white sand beach and the reef.  Its SNORKEL TIME!

* The yellow star between the cays is the channel we took to get outside.  the yellow star off the beach is where we dropped anchor on Dos Libras.  you can see the reef just above it.


This is a spot that Bruce and I had tried to reach before but found the sea state to be just too raucous for us to even make it through the cut between Gumelemi and Guana Cays.

There are mooring balls here for small boats and dinghies.  One small dive boat was already here, but otherwise we had the place to ourselves.  We had a hard time finding a mooring ball as you can hardly see them out on the open water.  I used the iPad to zero in on one but found that the positioning of the reef was inaccurate.  But I marked our spot for next time.

We tied off to the ball and wasted no time taking the plunge!  The day could not have been more beautiful and the conditions were absolutely perfect!  We were excited! 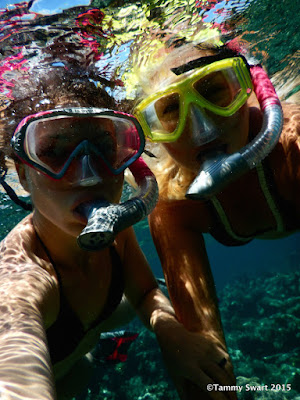 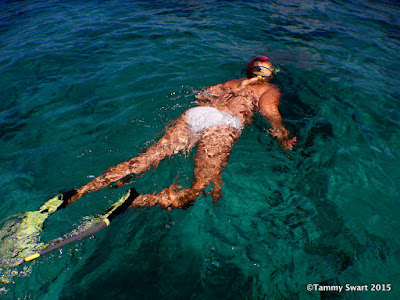 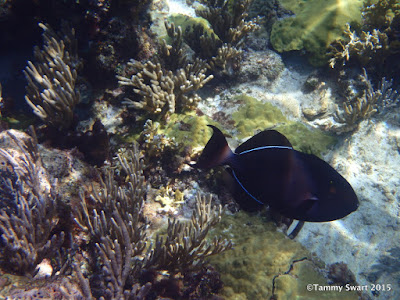 Enjoy the rest of these underwater pics... there are SO many and I want to post them all... But I will spare you. 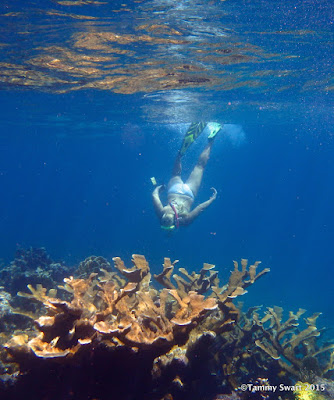 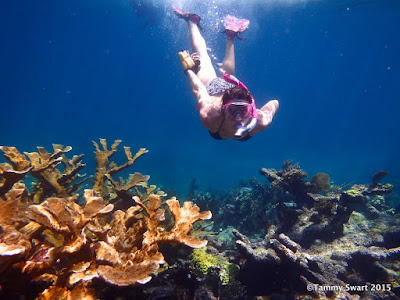 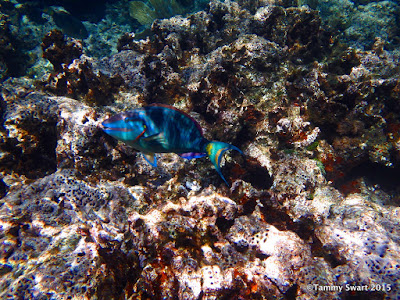 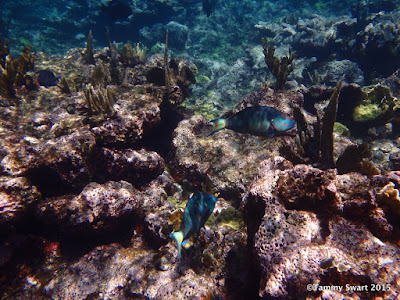 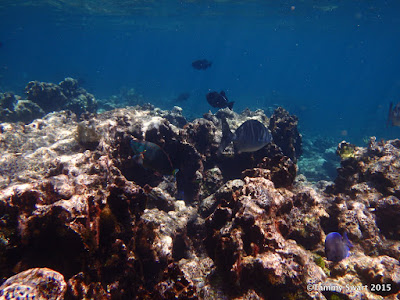 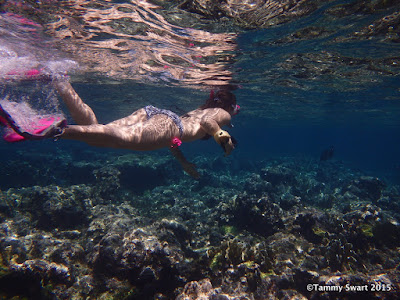 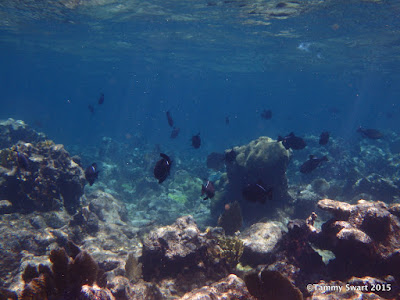 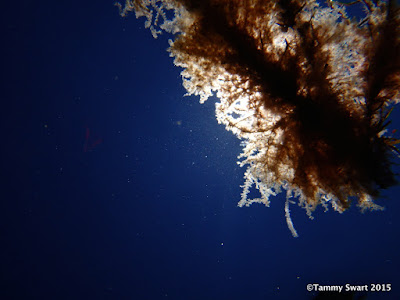 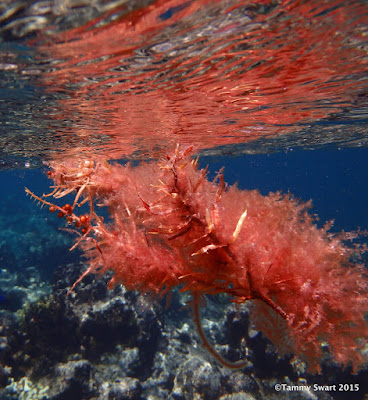 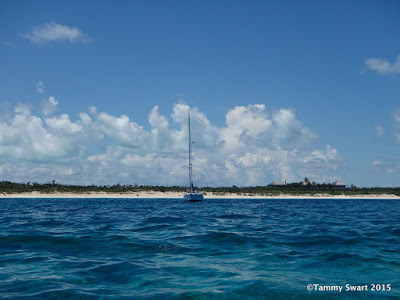 Finally we were driven back to the dinghy by chill and fatigue.  I know we said it before... but this is the BEST snorkeling event EVER!  We were all so thrilled with the visibility and the reef and the creatures we found there.

It was with effortless ease that we enjoyed this magical place, until we realized that it wasn't really so effortless.  The current had begun to flow inward.  Our arrival at high slack tide was perfectly timed to ensure that we weren't swept out to sea, but now it was helping us to return to the shore... or the boat.

We had what we came here for... a perfect snorkel day.  Now it was time to move on to our next stop... Treasure Cay!