The instructions were unclear.  I searched and found some obscure mention of the Blue Hole on Hoffman’s Cay in the Berrys and had some idea where we were headed, but only a vague description… second cove from the south end of the Cay, find the “lone tree” that marks the trail head, path leads off to the left which takes you to a beach…  That’s about it.

We took off in the dinghy with some water, mosquito spray and wearing our hiking gear.  After a perfunctory look at the first cove… which had a sort of a lone tree… we moved on to the second.  There we found several trees and no distinction between them.  We decided to take our chances on the first cove and that one tree where we could SEE a trail heading off into the brush.  So we backtracked to the sweet little hidden beach and anchored the dinghy in about two feet of clear water over sand.

There was a lot of trash and some unbleached rags tied to the “lone tree” so we felt that we had made the proper choice.  The trail was very narrow with smooth rocks to walk upon. I wondered how the trees were convinced not to grow over and close this path… they looked as if someone had come through with a weed whacker and created a distinct wall for us to follow. 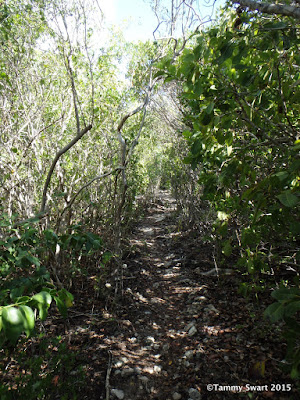 I was in the lead at first but after about the fifth spider-web-in-the-face, I convinced Bruce to blaze the trail as he had longer sleeves and pants than I did.  It had nothing to do with the sounds of creatures rustling in the brush… I’m SURE that was just more lizards. 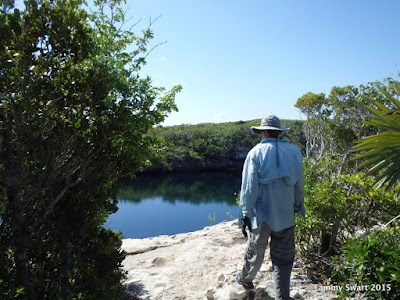 Very soon Bruce announced our arrival at the blue hole!  Yay!  We found it.

We stood on the rocky ledge and peered down into the murky depths.  The Blue Hole is surrounded by a rocky wall about 20 ft high.  there is a pathway leading down to the water’s edge below but it’s a little bit steep and we weren’t interested in swimming. 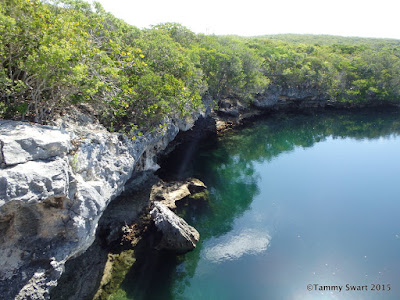 Supposedly there is a lone grouper that someone set loose in the hole… maybe he’s grown to mammoth proportions and maybe he’s very hungry.  There weren’t any signs of life in there and we weren’t going to provide any relief for lurking sea monsters.  Blue holes are kind of mysterious in that they could be harboring creatures from prehistoric times in their isolated depths…  That’s all I need is for some funk to attach itself to me and no doctor can cure it because all of the cave man docs are dead… 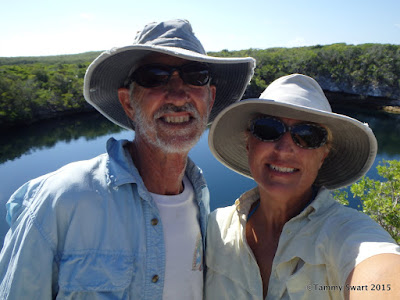 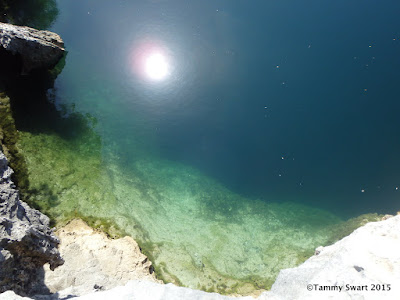 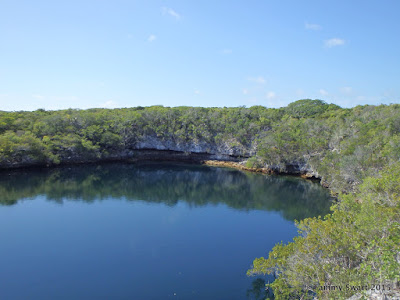 But I digress… A veritable CLOUD of mosquitos had joined us on the trek here… We could literally hear them buzzing.  I can tell you that my home made mosquito repellant is working nicely.  They tried buzzing around us but not one bit and I could spray a spritz into the cloud of them and they would disburse.  Here’s the recipe….

We (thought we) backtracked to our beach…  There were more spider webs.  How did those little devils get their webs back up so quickly?  There were lizards… why do they show themselves now when we could only hear them on the way in?  There was a GIANT stone crab following the trail in front of me…  Where was HE on the way in???  And I’m sure that big root I just stepped over wasn’t there before… 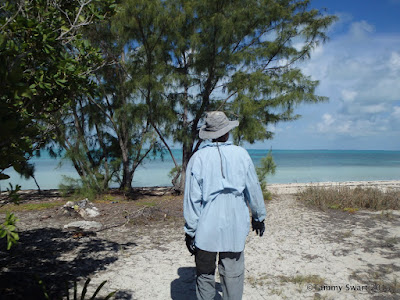 Suddenly we were out on the beach again.  Only it was the wrong beach.  No dinghy.

We recognized this as the next cove over from where our dinghy is anchored.  No way to walk around so I guess we missed the branch.  This explains all of the new spider webs and stuff…  Can’t get nuthin’ past us, great explorers that we’ve become…  Lucky for me I had the GPS Motion X app in play.  I took it out and saw that we had taken the OTHER trail to the hole… And we were safely on our way back there to take the correct trail and, indeed… find our dinghy safely waiting…

OK, we found it.  All in a morning’s entertainment.