Time and Tides Wait For No Man

Time and tides wait for no man… but we spend a lot of time waiting for tides out here.  We arrived at Tom Curry Point, just around the corner from Little Harbor (N26°20.020, W077°00.385) in the early afternoon.  We had planned on stopping at Sandy Cay to do some more snorkeling but the swell coming in off of the Atlantic was making the waters at the Sandy Cay a little too active for us. 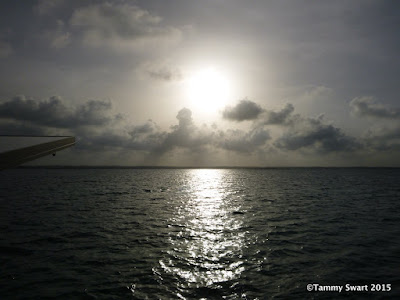 We were tired.  We needed a day to relax.  So we just pressed on and dropped the anchor in about 8+ ft.(that would leave us two feet to drop with six`+ feet left  - today’s tide was high 3.3 ft and low -.3) and called it a day.

We never make a move without knowing where we are in the tide range.  High tide has been in the late afternoon these days and we arrived in the early afternoon with about two hours left to high tide.  I picked one spot and didn’t feel comfortable.  What if I was off in my calculations?  We would be aground at low tide.  So, we moved once and found a little more comfort… just another six to 12 inches… that’s all we need for comfort.  We relaxed all afternoon and enjoyed a hazy sunset. 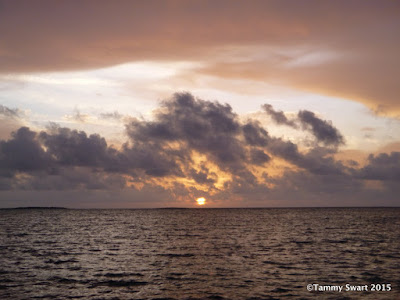 The next morning we lounged around waiting for low tide.  We wanted to go and explore the blue holes at The Bight Of Old Robinson.  I figured that if we entered the tidal flats at low tide, it could only get better and we wouldn’t get trapped by a dropping tide.

I really didn’t have any kind of instructions for exploring these blue holes, so I used information from other bloggers who had gone and Google Earth to get an aerial view of the area…   We entered through what looked like a deeper area, but remember, it’s low tide. 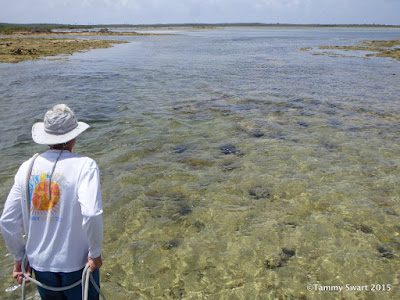 The spot we chose was an inlet, but the water was still coming out.  Our tide time was for the nearest tide station which was some miles to the north… I guess it takes a little while for it to catch up this place.  Once we were inside the cut, we could float  but just barely.  Very soon we gave up trying to use the outboard motor and Bruce pulled us along.

It wasn’t much later that I noticed a subtle change in his attitude and figured I had better get my butt out of the dinghy and help him pull…  I could hear the thoughts in his head “Next time I’m going to pay a little bit closer attention to what she’s planning for us…”. 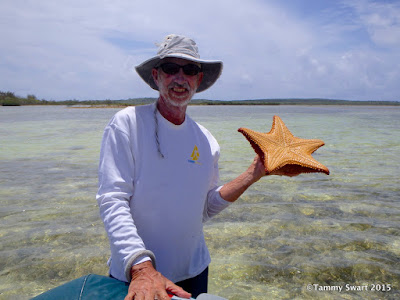 Suddenly Bruce changed course, jutting off to the right.  He had spotted a HUGE red Bahama Star.  I just love these things.  We’ve seen a few, but this is the biggest yet.  We’re going to have a difficult time topping this! 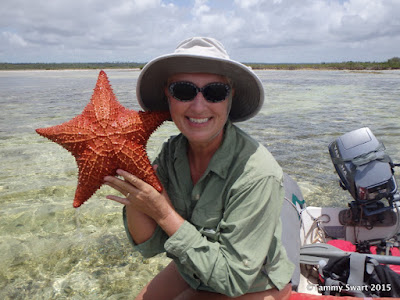 We moved on a bit further, and next, Bruce pointed out a clump of growth on the bottom… It didn’t look like much to me, but when I got closer, I realized that it was a bunch of sea plants growing on a nice sized conch. 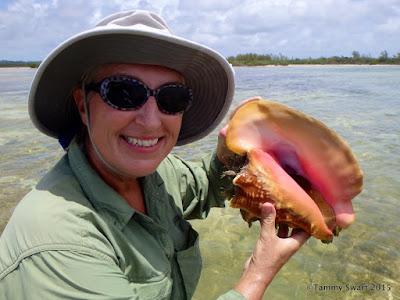 It was gorgeous, the colors of the shell…  The creature was trying his best to be very small, sucking himself up inside the shell.  We had a short discussion about keeping him and making him our dinner, but in the end, we took some pictures and returned him to his home.  The truth is, neither of us wanted to be the one to do him in… 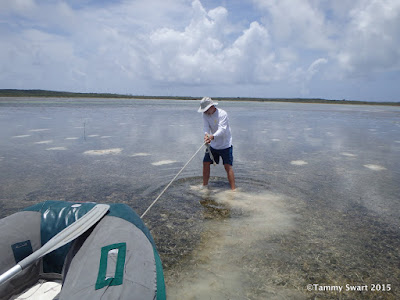 The going became a bit more tough.  We looked out across the broad expanse of shallow water trying to determine where the deeper water could be found.  We were headed towards the furthest blue hole.  Bruce would pull the dinghy from the front while I tugged on a line tied to a handle on the aft starboard side.  This worked pretty well as it kind of lifted the back end enough to get the dink to slide along on top of the sand and seagrass.

Our feet would alternately find semi-solid holding and then plunge deep into the mire.  We found that we could stand on top of the many sand mounds created by some creature or other and get solid enough footing to give the dinghy a good tug.  We hopscotched across in this fashion until we thought our arms and legs would give out.  I could hear the thoughts in Bruce’s head (louder now), “Nobody knows we’re out here… I could just hold her head under the water until the bubbles stop and my troubles would be over…” I assertively pointed out the advantages of this kind of activity…” Well, we’re getting our exercise for today!”…

Finally I decided it was time to re-evaluate… I sat on the side of the dinghy and pulled out a snapshot I had taken from another Cruiser’s blog.  It had waypoints for the many blue holes out here.  I quickly entered three of the closest ones on our Garmin app in the iPad and looked at where we had been so far.  It seems that we’re kind of going in a big loop… we abandoned the furthest hole and decided to head for the next nearest one.  The day was progressing but our progress has been slow.

We pulled the dinghy to the edge of a white sandy spot and put out the anchor.  We could really tell that the tide was beginning to flood now so things were looking up.  I suggested having a sandwich and Bruce eagerly agreed.  Things were looking up.  I could hear Bruce’s thoughts “Nom nom nom, good sandwich… I guess I’ll let her live…” and then he saw something coming towards us… I told him to get his feet out of the water… it’s a SHARK!!! 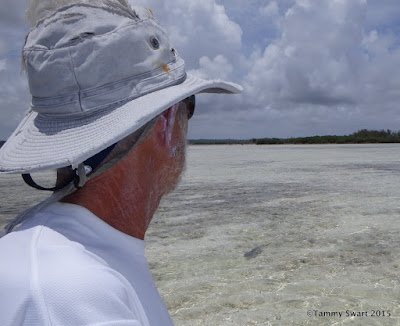 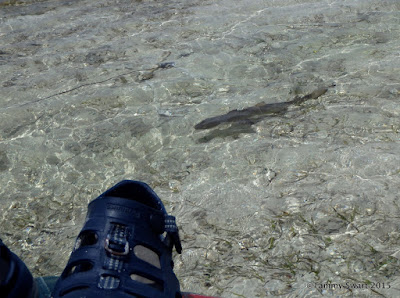 It was the cutest little shark.  It swam right for us and kind of went under the dinghy then out the other side before it saw us and high-tailed it out of there.  Sweet!

We consulted the chart and decided to just leave the dinghy and walk the remaining 1,800 ft. to the blue hole.  The going was easy on the white sand.  It looked like a tidal wash and the water was sweeping past our feet as we slogged along.
We came to a mangrove and had to go around.  It looked like the hole was just on the other side.  By this time, Bruce had abandoned trying to wear his shoes.  I had on neoprene booties that were working perfectly for this, but he was walking barefoot through an ever increasing field of upside-down jellyfish.  They must not sting because he never felt a thing. 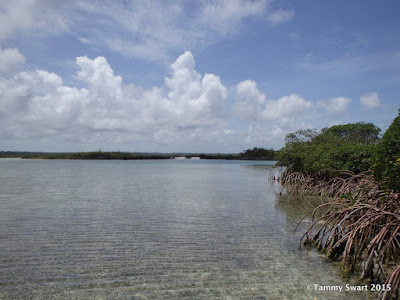 We rounded the mangroves and I could see where the hole was.  There was no way we were going to get there on foot.  The water was deeper and it just wasn’t happening with all the creatures in the water.  Sooooo we turned back.  I wasn’t going to broach the subject of returning with the dinghy.  Bruce’s patience was wearing very thin… 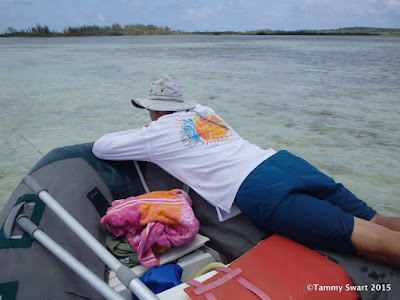 We got back to the dinghy and he laid out on the side with a huge sigh.  I could hear his thoughts “Nope… she’s gotta go…  How am I going to make this look like an accident?”.


I took up the anchor and dragged the now floating dinghy over to the white sand area we had walked across earlier and re-set it.  I figured if we were going to take a break, we might as well do it in the pretty water… and I plunked myself down letting the incoming waters sluice along my body waving me like a flag. 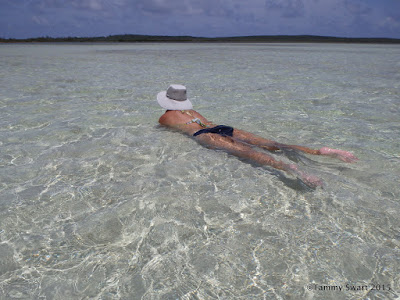 Ahhhh.  Just about the time Bruce decided to get in, something stung me and that was the end of that… 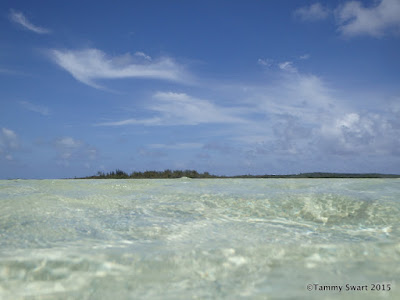 So with the water rushing in and flooding the flats at a now alarming rate, I broached the subject of returning to the blue hole in the dink.  Bruce agreed.  (maybe thinking to drown me in the deep blue hole…).  We sat on the pontoons and just let the incoming tide take us where it wanted.  I tried directing with the paddles, but that just seemed to put us on the ground.  The water knew where it wanted us to go and we rode the tame rapids in past the mangroves.  Awesome!

We drifted around the mangroves then had to paddle ourselves over to the blue hole.  A larger shark and dozens of turtles skittered away from the hole as we silently paddled right over the top of it. 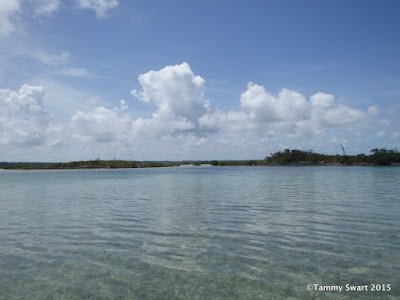 We put down the anchor and just sat there watching the turtles come up.  With the shark, there was no way we were using our snorkel gear, and the water was pretty murky green anyway.  Not inviting at all.  We sat there watching nature for a while. 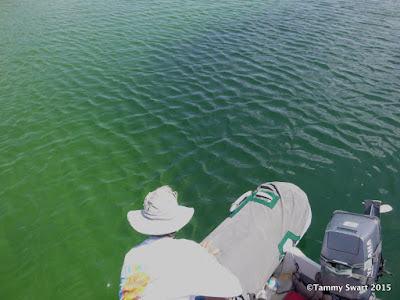 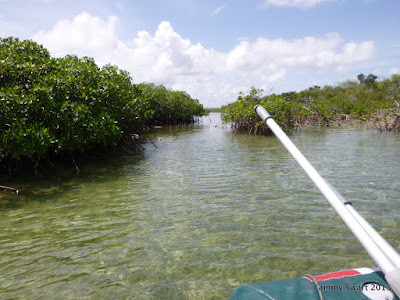 The water was rising quickly and we could now use our outboard again.  With the thought of all that tugging and dragging now gone from our minds, we were bold enough to go deeper into the flats in search of another blue hole.

We quickly found it under power.  It was smaller but more pronounced in shape.


We set out to find a third, but the deep water ran out and we had no intention of dragging or smucking ourselves over there so we called it a day and motored all the way back to the inlet where we had first come in. 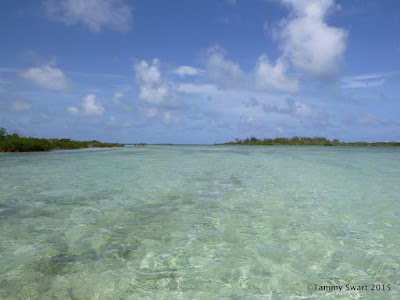 The water was now rushing in against us where we had once dragged our dinghy.  We could now motor easily without tilting the outboard up. 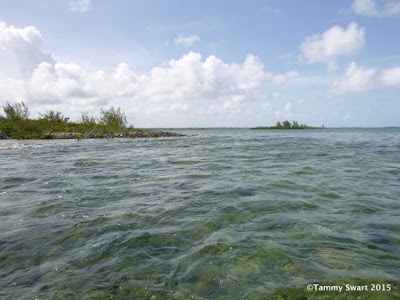 When we reached the inlet, we found the water raging in against us.  We had to motor as hard as our little 8 hp Yamaha could go just to get back out!  Slowly we fought the clutches of the strong incoming tide.  Little bit of fear here, not gonna lie.  Today we had such an adventure.

We never found the “main” blue hole where the commemorative plaques can be found that show where two people have lost their lives.  Maybe we will find them next time.  But today was such fun in hindsight. 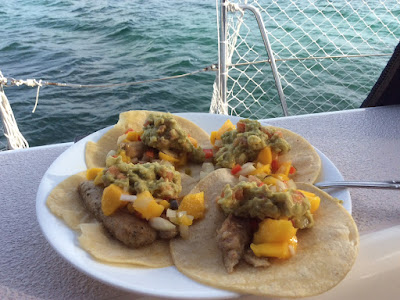 Sitting in the cockpit having a wonderful fish taco dinner… we looked back on our day.  Yes, we had moments where we were outside our comfort zone and wondered why on earth we were doing this crazy stuff… but this is what Cruising is all about.  A little bit of danger never hurt anyone… We had lived to tell about it.  We saw creatures and places that few people ever see… and we learned a little more about tides.  Wait a bit for it to come up and you won’t have to work so hard next time! 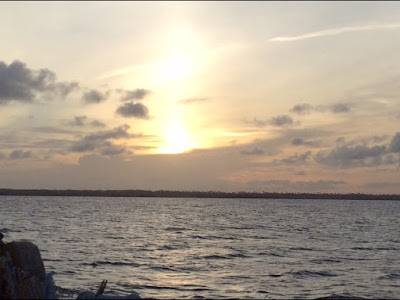