A Day With Friends - Lamar, TX.

Our days were full during our week in Rockport, TX.  We have had time to work through all of the New Cruiser jitters and get ourselves on "island time" for sure!  It's been a nice transitional period during which we've finished a number of projects and dipped our toes even more deeply into the Cruising life.  It has been a time in which we are no longer home, and yet, close enough for contact when we wanted it... 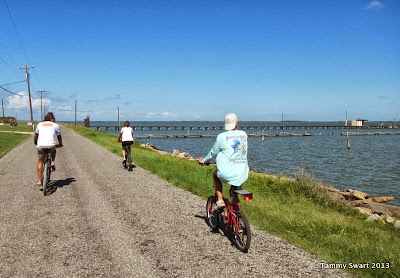 Long-time friends and traveling buddies, Robert and Kathy, drove over to hang out with us for a day.  They loaded our bikes into the bed of their truck and we headed for a little coastal town called Lamar, just over the Copano Bay causeway.  I never knew the town existed.  We parked the truck and hopped onto the bikes, and away we went!

We rode along the water's edge, enjoying the physical activity and the beautiful day.  We had been spending way too much time down below working on boat projects... 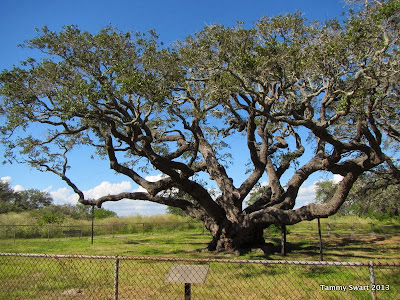 There were fishermen around but the entire town had the feel of shutting down... Soon the Winter Texans would arrive, so this was merely the respite time between the summer crowds and the winter crowds.  It's the perfect place to spend an afternoon sightseeing.  Our first stop was The Big Tree at Goose Island State Park.  I like trees as much as the next person... but I'm pretty sure that there is an even bigger tree at the Aransas County Wildlife Refuge up the road...  Even so... it is kind of neat to stand here and think about the nearly thousand years that this tree has seen come and go... 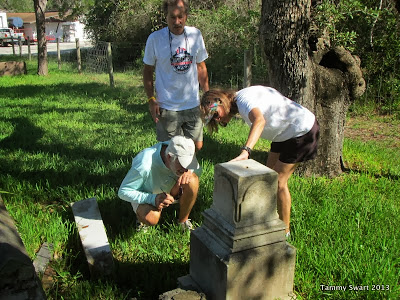 We continued on our way down narrow country roads where the air was scented so sweetly in the absence of city influences.  The day was warm, but our path was dappled with shade from the oaks, so even with our physical exertion, it was pleasant.  Next, we came to what would become my favorite stop of the day... the Lamar Cemetery. 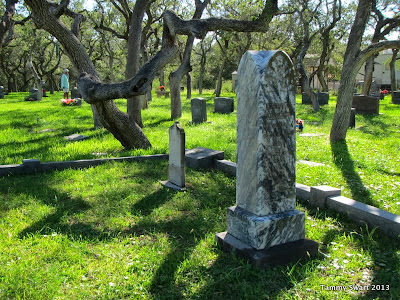 I've always been fascinated by cemeteries... the older the better.  There were many graves here from the 1800's.


I love walking through the quiet markers... trying to make out the names and the dates on the stones... 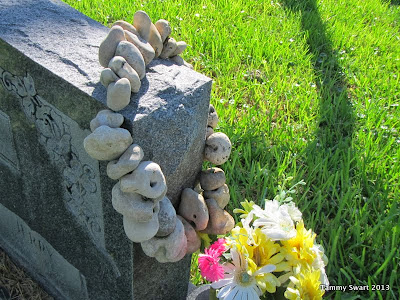 I let my mind go to the people who lie here and wonder what happened to them... what was going on at the time they passed...  I think about the tributes left there by their descendants...  It's nice to know that somebody still visits these people, even though they've been gone for a long time. 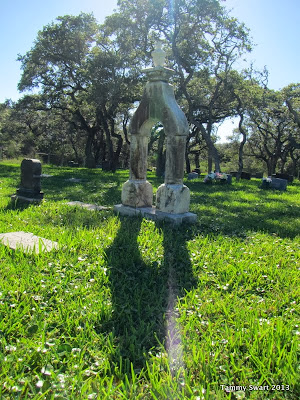 There were whole families, there were young children who died within weeks of one another... there was one marker with a man's name and date of death.  Next to his name was that of his wife and son... but there was no date of death beneath their names.  The marker was from the 1800s.  What happened to the woman and son?  Did she remarry and end up being buried elsewhere? 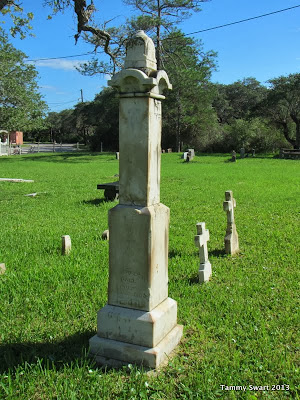 Important people in the town's history, as well as that of the entire Gulf Coast, can be found here.  Familiar names, if you can just make the connection.  It's such a wonderful way to let your mind wander...

The afternoon was passing, so we made our way back to the road amidst clouds of mosquitos.  This was the supreme test of my insect repellant.  We had mosquitos land on us, but they didn't bite... I will say we had to reapply the spray about three times during our ride, but nobody received even one bite.  I'm calling this a success!

We continued on our bike ride back to the truck, loaded up and stopped by the boat to freshen up.  We  were treated to a delicious Mexican dinner at Los Comales,   We spent the evening talking about our shared good times gone by,  and about our exciting future.  Of all the people not related by blood... We know that Robert and Kathy will be the ones who come to visit us in far off places.  Thanks R&C for the wonderful day!