Putting The Nerves To Bed

Back when I held a job... my nerves got a workout almost every day.  It was a common occurrence.  I would get frustrated over something that was out of my control or a wrong that I could not right.  I was wound up almost all of the time, but I was used to it.

Since retiring to Sail-Off-Into-The-Sunset... I can say that my nerves have become lazy.  But every now and then, they do get dusted off and frazzled anew.  Our first jaunt without a Buddy Boat, from Offatt's Bayou to Kemah, was one of those days.

First, it started as a tiny minor little annoyance...  The Galveston Causeway Railroad Bridge tender had "tone" in his voice when he answered my inquiry.  He might as well have told me " the bridge is obviously UP you d*#mb a$$, why are you bothering me?"  I felt my flaccid nerves start to stir. (Snap, crackle)  Well, in my defense, I could hear a train whistle in the distance... how do I know how long ahead he lowers the bridge?

Ok, I shook it off, maybe he was in the bathroom when I called!  It's a beautiful day and we're FREE! And, we're headed for the land of endless showers and wi-fi!  Woo Hoo!

The next ripple in my nerve pool was caused by a barge nearly running us down in the Pelican Island Cut.

Previously, we have had nothing but pleasant experiences with the working traffic along the way.  Coming into the Cut, we were asked to wait up while a barge repositioned his load, which we did... and pleasantries were exchanged.

We were given the "all clear" and proceeded through the cut.  As we were bounced around by the propwash of half a dozen banked barges, we suddenly saw a fully loaded barge bearing down hard upon us. (Snip-snap, SNAP)

We had nowhere to go, with the line of barges on our Starboard side, the Dredge taking up the Port side...  We couldn't get any closer to the barges without the propwash spinning us like a top.

The guy never said a word, just buzzed on by us leaving my nerves popping and jumping with the injustice of it.  HOW RUDE! (snap, pop) 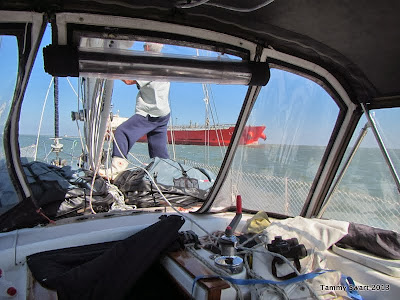 I tried to brush it off and get over it, but the next bit of entertainment was just getting started.  The winds had suddenly increased and we began to feel the effects of the strong outgoing tide.  We bounced out into the Houston Ship Channel and began to slog our way amidst the real contenders... SHIPS!

Bruce hurried to get sails up to ease our motion while I fought the 2 knot opposing current with it's associated chop.  I listened to the radio traffic as we were derisively mentioned... " Yeah that SAILboat is making, like, 2 miles per hour".  Hey!  We're going 3.9 knots, I'll have you know...(snap, pop)

I guess I should give our AIS credit at this point for bringing a welcome bit of comfort.  The information it provided was my lifeline to sanity.  It made sense of what would otherwise have been a confusing situation.  I watched the ship traffic on the screen as Bruce raised the sails, our ride became more smooth and order returned to our world.

Soon, the nerves were once again returning to normal as the sail became very much like just another afternoon on the water.

Yeah, this is NICE!  A beautiful day for a sailboat ride.  I was comfortable with the charts and knew we were in good water.  The waves came down and it was just perfect.  I was surprised to feel my nerves folding themselves back into their beds... nighty night, nerves! 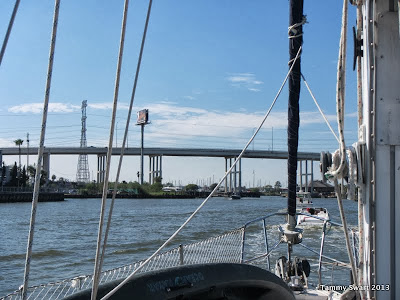 What was I all fired up about?  This is no biggie.  If we're going to survive this "Cruiser" thing, we'll have to be ready for more than THIS!  No worries, I've GOT this!  We pointed our nose towards the bridge and very soon we were entering the channel that is the final approach to the Kemah area.

I enjoyed the reverse parade... us watching the Boardwalk people, watching US...

And then the nerves were jerked back out of their beds for another round!  (Squawk, snapple/snap pop!)

I could handle the dropping depth readings as we turned into the Portofino Harbour Marina.  I was confident that there would be enough depth for us... they wouldn't tell us to come here if there wasn't enough water for us, right? (ahem)  I brought the boat in as far away from the bank on our Port side as I could squeak by.  I brushed past the sailboat docked on the outside of the pier... hugging his gunwales as the depth gauge dropped and dropped.  Finally, I just quit looking at it!

ABORT!  ABORT!!!  Holy CRAP!  There's a stupid little fishing boat in our slip!  So I throw it into reverse and wrangle the nose around, then the stern... forward, back, port, starboard - it's a blur!  Somehow I got the boat backed over and into the slip on the other side of the finger pier. (without hitting anything)  A nice couple came out to help handle the lines.  If not for their help, we might have had the opportunity to meet the owners of boat next to us.

When everything was done and we were tied up snugly in our slip, my legs began to shake.  I think this took two years off my life!  But, we got it done.  Again, I thought to myself, "If we can't handle a little thing like THIS, we have no business being out here!".  And I guess we did handle it... it was just irritating! (snap, pop, fizzle...) 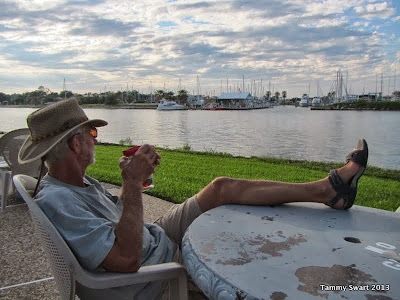 Fast-forward an hour and now we sit beside the pool having a beverage.  We watch the sailboats go by and we remember how lucky we are to be doing this.  How lucky I am for the opportunity to quit my job and leave that world where problems are beyond my control.  Here... things may not always be within my control, but, if we're lucky... they'll be manageable.  And my nerves?  They've gone back to bed.