Cruisers For A Week 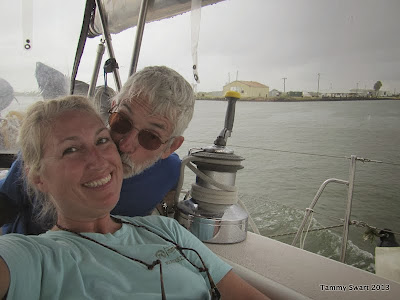 The excitement hasn't worn off but a sense of calm has taken over.  We have broken the dock glue grip and are on our way.  My mind is a bit fuzzy, the days run together.  The places, although few, have begun to get jumbled.  I guess Cruiser brain has kicked in.

I had worried that I would not be able to "do nothing".  Well, that seems to not be a problem.  I've finished one book and am halfway though a second.  I'm definitely letting go.

Bruce and I celebrated my 50th birthday and his 71st, quietly with the folks from our  Buddy Boat here in Offatt's Bayou.  It was a lazy day and the only thing we did of interest was to visit Phantom for brownies and coffee, then make personal pizza dinner for the four of us.  We have been pinned in by the winds, which have mostly been blustery since our arrival here.

So far, we've cruised 174 miles.  Not so much really.  We haven't even made it past Galveston, TX., which is the furthest up the coast I've been in a boat.  But in my mind, we're already worlds away.  We have been so lucky… charmed even.  The weather has been cooperative and the waterways have been smooth.  Bruce has been able to get some sailing in, although motor-sailing mostly, or just motoring.  He just can't seem to sit still and wants to SAIL!

I can't say enough about how much we've enjoyed our new friends from Phantom.  They have taken us under their wing and have shown us the way to get started.  I mean, we KNOW how to sail and to get from here to there… but just the ways of the waterway, dealing with the locks and the rivers…  They have been just wonderful!

I've never anchored in a river before.  I wouldn't know the first thing about it… but wait.  That's not true…  I do NOW!  We spent the first night after Lighthouse Cove in the Colorado River.  It was such a thrill.  We followed Phantom through the Lock, listening to Jimmy and the Lockmaster talk back and forth.  We kind of got the feel for it.  We turned down into the river and Jimmy told us to drop the hook anywhere past the last green channel marker.  Once we were "outside" the marked waterway, we were free to anchor anywhere.

We turned up into the current coming downstream and dropped the anchor.  We set it, and with the exception of the trip line float we had rigged being pulled under by the current… everything went fine.  We had rain most of the day, but once we got settled in, the sky cleared and we were able to get out on deck and see our new surroundings.  It made us feel almost giddy!  We spent a quiet night in the river and were up early the next morning to get ready for our next leg.  We didn't want to hold things up as there was another lock to go through.

Phantom contacted the Colorado lock and was given the go-ahead to lead us out of the East lock before other traffic could pass.  We hurried to exit the lock so as not to keep the other boaters waiting.

We met a group of pleasure craft waiting to enter the East Lock on their way to Port Aransas to attend the Harvest Moon Regatta.  Among them was More Good Timin'... one of my Facebook friends!

The day on the ICW was uneventful… maybe TOO uneventful, but we were both so excited it didn't matter.


Even the kitties are becoming comfortable with this routine.  Jetsam has surprised us by becoming so outgoing.  She even came up into the cockpit while under way for a look around.

I am always on the lookout for critters to photograph and was surprised that we didn't' see more birds.  Any time I wasn't on the helm, you can bet there was a camera in my hand. 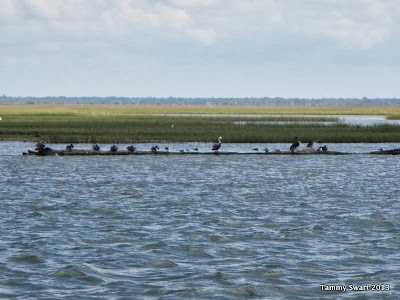 The land alongside the ICW is mostly marshy and empty of civilization.  There was the occasional small fishing town that looked like someone may have built a shack, then a few more people, and a few more… and then a bait stand, maybe a boat ramp, followed by a small store… 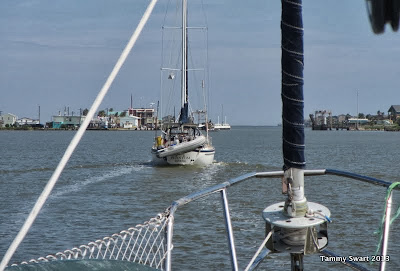 They just spring out of nowhere.  Some were actually quite nice with green launs and brightly colored houses on stilts.  All very quaint, but I can't imagine living there… 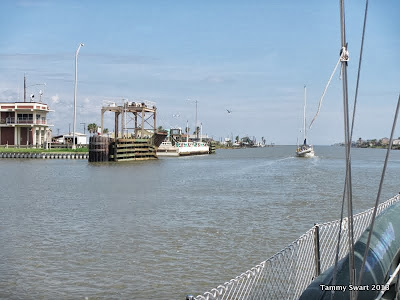 One such small town spilled across to the island 0n the other side of the ICW ,causing the need for a cute little bridge... the Caney Creek Swing Bridge.  It wasn't a problem, but just swung right open as we approached.


Our next stop for the night was the San Bernard River.  This was a little more difficult than the Colorado, because the depths weren't as good and we had less room to swing.  We set the anchor and I went below to begin dinner, we were hosting Phantom… Bruce donned swim trunks and jumped into the river to check the depths.  Suddenly, I heard him calling me to look out!  I glanced out the galley port and saw him standing on the bottom in chest deep water, just a few feet from the boat.  "I guess this means you want to move the boat, don't you?" I said.  That would be affirmative… 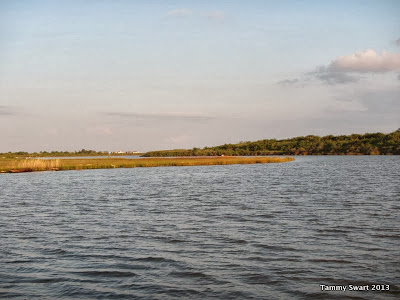 We reset the anchor to keep us in the deeper water towards the center and give us a bit more room to swing, then had a great evening enjoying brisk conversation with our new friends.  It seems that we NEVER run out of things to talk about with these people and find them endlessly pleasant.  This is such a relief because we had actually never met them before.  We hooked up with them via Active Captain's new eBoatCard website.  This could have gone horribly wrong, but like I said… we're Charmed! 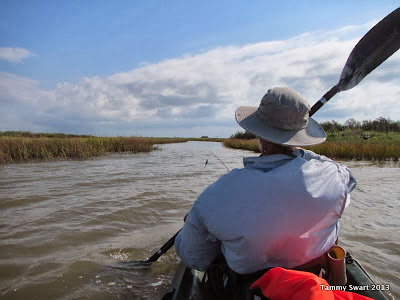 We stayed two nights in the San Bernard.  The river had a kinder current and hardly any traffic due to the fact that there is no outlet into the Gulf of Mexico.  Bruce and I went exploring early afternoon of our second day there, after doing some kind of boat chores… I don't remember what… We took the kayak off the bow and set off like Pro's!  There was a small tributary off to our left.  We paddled into it amidst multitudes of splashing fish.  Bruce threw a lure, while I guided the kayak along. 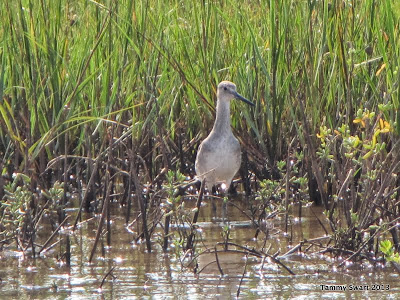 We crept along and finally saw some birds hanging out in their natural habitat.  One small bird was not in the least bothered by our presence. 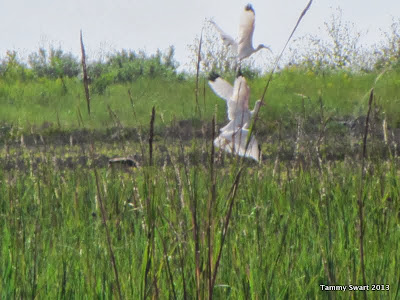 Others took flight when we got too close.  We could look overland to see our masts back in the river proper.  It was so quiet and peaceful and the air smelled so sweet. 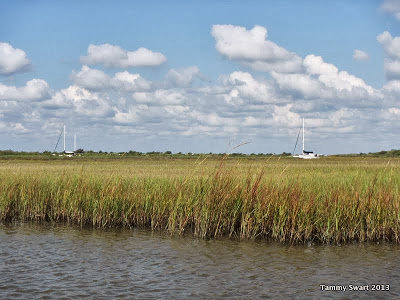 We went as far as we could until we began to bump the oyster shell bottom, so we turned back and continued towards the beach at the "mouth" of the river. 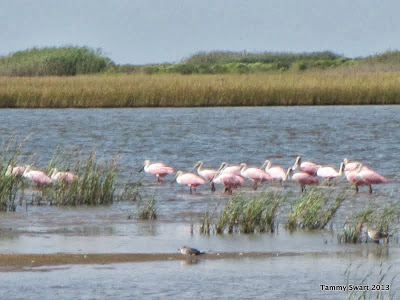 We found a flock of 30 or more roseate spoonbills… my FAVorite bird! I took hundreds of pictures as I crept closer and closer.  I finally stopped, thinking I was close enough.  I didn't want to disturb them. 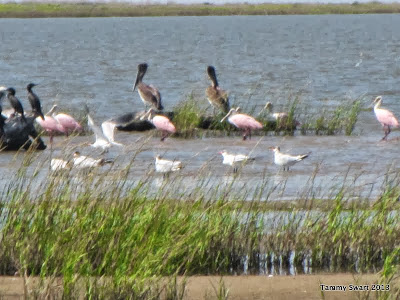 They were hanging out with a bunch of pellicans and other birds, just doin' their thing.  They were so funny to watch as they all warily strutted along in the opposite direction from where I stood.


Suddenly, they all got spooked and took flight!  It was amazing to see their nearly white backs going away, then they all banked and I got the full glory of their pink undersides as the circled back around and landed back where they were.  It was awesome!

I left the birds alone and explored a huge fallen tree.  I went over to climb up on it for a photo op, but found that it was snuggled in the sand with a moat filled with blue crab protecting it.  I leapt aboard and did my climbing, then jumped off barely missing the opportunity to fall on my ass in the water.  I had made an unfortunate shoe choice today… 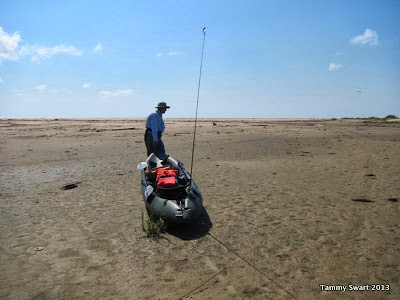 We continued on until we could no longer paddle the kayak.  We pulled it along to the end of the road, where we beached it and headed for the beach on foot.  There wasn't another person for MILES!


The beach was littered with driftwood logs and seaweed but we took a quick dip anyway.  We whiled away the afternoon lying on the sand contemplating life.  We watched the baitfish surf the waves for nearly an hour before we headed back to the boat to clean ourselves up for dinner aboard Phantom. 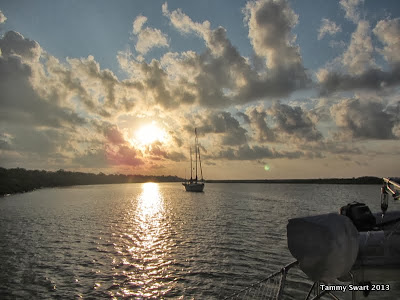 The next morning, we needed to be on our way a little earlier as we were to be the first out of the lock when it opened.  We radioed the Lockmaster and he opened the lock just as we approached.

We had to dodge a lot of floating driftwood logs on this stretch of ICW.  I assume they were coming from the Brazos river up ahead.  There was some question as to whether or not the recent rain up North would have any effect on us, but we were, once again… lucky.  We breezed through the lock, no problem.  I know that eventually our luck will turn, but for now… I'm thankful that we're getting an easy start. 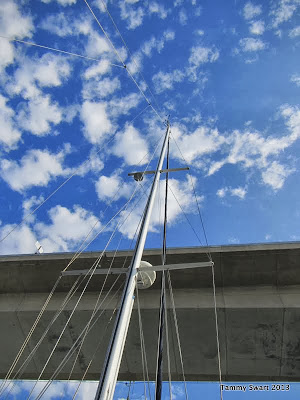 We motored through the Freeport TX area where there is an inlet to the Gulf.  This is a part of the ICW we've travelled many times participating in the Harvest Moon Regatta.  It was funny how little of this territory we remembered seeing before.  We must have slept through this part!  There were two bridges that we had to go under... No more butterflies, but there's always that one moment of uncertainty looking up at the mast as it slides beneath the bridge. 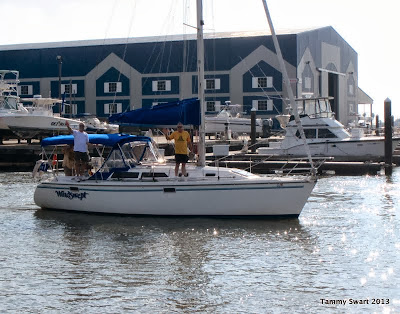 We were joined by a fellow BYC'er, Windswept, who were on their way to participate in the Annual Harvest Moon Regatta, which would begin two days from now. 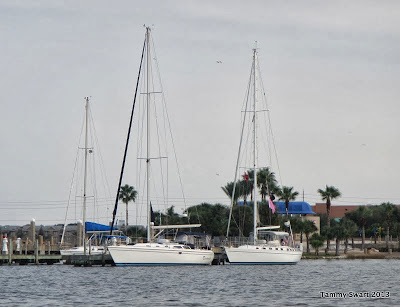 They followed us all the way into Offatt's Bayou, then headed for the South side of the basin to join other CC boats, Bumboat and La Vie Dansante.  We were thrilled to find familiar friends here and took the dinghy across to hang out with them for the evening. 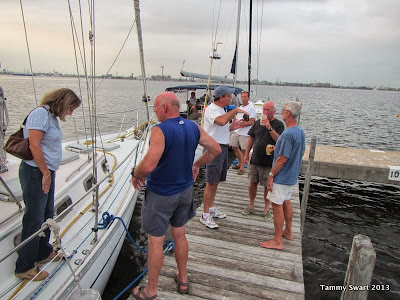 It was a lot of fun and great to see some friends who hadn't made it to our bon voyage party.  We made our way back to Dos Libras before dark and dined alone that evening and had an early night.

This brings you up to date, dear reader.  The wifi is highly questionable here, so it's difficult to get a post published.  The weather has been cool, rainy and windy… keeping us holed up onboard.  We've been somewhat productive.  I got that birthday cake made only one day after the fact.

We had a visit from Chuck and his friends as they were passing through on their way to Port A for the HMR party.  We begged off going to Phantom for dinner tonight as the weather wasn't good and we've been taken over by a laziness that has been long in coming. 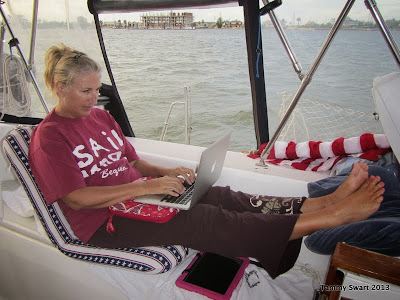 We've been "UP" for so long… it's time to come back down.  We are content to just lie around in our jammies with a run drink for the evening, contemplating our future good times.  And that… is how I will end this post one week after our departure as Cruisers!