Really Getting to be Exciting on Wednesday Nights! 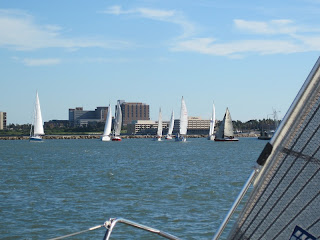 I had not planned to go sailing today. I've got so much to do at work I thought I would never get out. But by 4:30 in the afternoon, I'd had it! I had to get out of there! 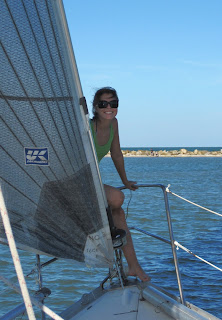 I picked Brittney up at the house and we sped down to the boat to join the crew. There was a great turnout tonight. Its the first Wednesday of the month so it's working sails and a pursuit start. There were 18 boats milling around waiting for their individual start times. We put Britt out on the bow to watch for traffic. Now if we could just teach her the terminology, she would be great! 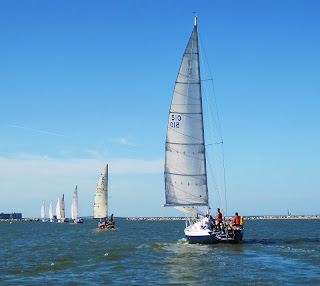 We had a wonderful vantage point at our start. Brittney asked how we ever made it with more boats out in the old days. Clay filled her in. It was hairy! Today there weren't really any tense moments since everyone had their own start time. No charging the start line... 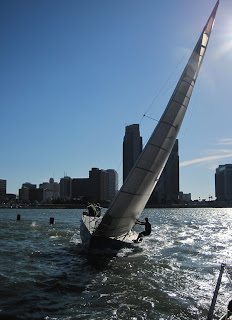 We went about 6 seconds after Sweet Lelani. This means they could cover us and lay on our air as we left the gap. We seemed to be oinking as Creola came up from behind in the clear air and rolled us. It was good for photo ops anyway. 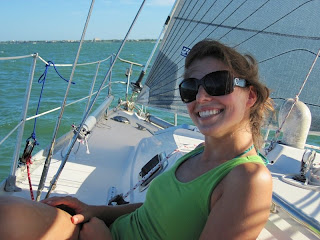 Our crew sat the rail once we had things settled in after a tack to the right to try to get some clear air. 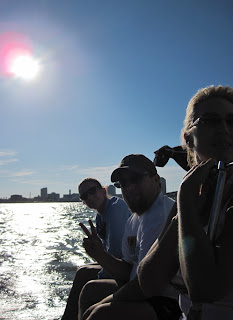 It was at this time that I realized that I hadn't thought about work in at least 10 minutes! What an accomplishment! I turned my thoughts back to enjoying the wind, our good friends and the close racing and forgot all about it again. 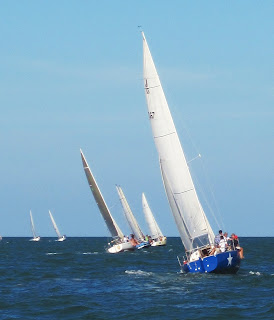 We raced towards the first mark, #2 and just kept right on going...

We made a bit of headway on some boats as we neared the second mark in the race, #19. There was some confusion throughout the entire fleet. Everyone seemed to be sailing high of the mark. We doubted our crewman, Steve and followed the fleet. 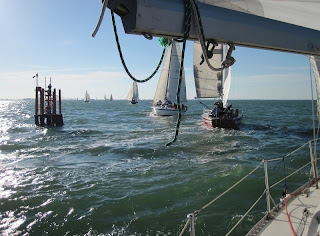 We slowly realized our mistake as we neared the mark and saw other boats ahead beginning to drop down to where Steve thought it was all along. I was on the helm so that Bruce could prepare for the jibe as we round #19. There was a boat close inside and another boat coming up across their bow. They slammed right in front of us causing me to sail above them to avoid a collision. When we reached the mark, I stayed well outside the fracas until it was safe (in my opinion) to turn down. 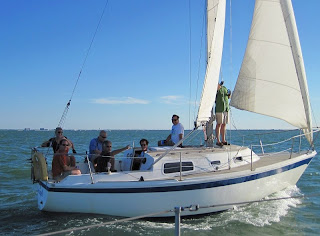 Once we rounded the mark, I was headed for the Gap as I tried to cover the only boat within my reach, Stoopid Monkey. After a short duel with Kinderspel, I heard one of their crew say... "the mark is over there", pointing off to our right. Oh well, so there was another mark to round before heading for the slip. What do I know! I thought it was kind of funny... 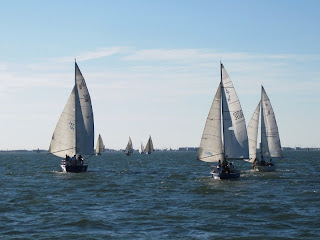 So I turned towards the actual mark, #10.
We gained some ground but I had lost us a lot of time with my failure to pay proper attention to the race. 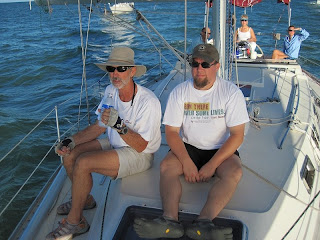 The guys got the sails set wing on wing and we settled in to follow the pack to the mark. 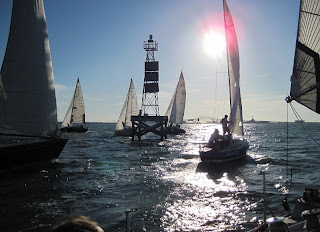 We got closer and closer. We all seemed to realize at the same instant, that Passion was coming on fast from off to our port side. There were boats rounding ahead of us. Pazuzu right off our bow, and Passion racing to squeeze between us and the mark. I steered off to the right to get us out of the way as the crew on Passion yelled for us "not to worry, hold our course"! No way! I'm practicing collision avoidance! 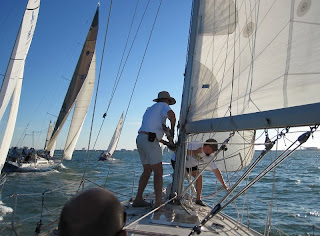 The way cleared and we rounded the mark and the crew got busy trimming the sails for the last leg of the race. 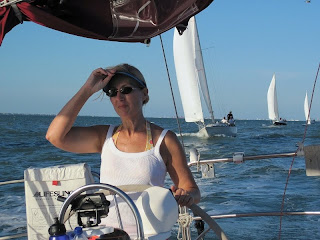 This is my favorite point of sail. The boat just feels like it's bounding along rising and falling with the waves. It was spectacular! The other boats were all beating towards the gate like thoroughbreds! 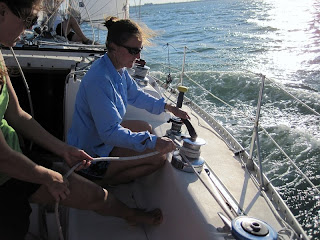 We've always said, from way back in the "Lady Jane" days, your first time on the boat, you're a guest. You come back again, and you're crew. Jacque and Steve are working hard to make sure Brittney knows all she needs to know to fulfill her place on the crew list. Jacque had Brittney trimming sails with the best! 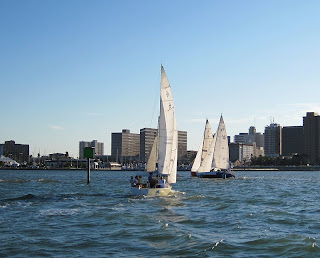 We made it to the gap with 12 other boats of the 18 total still ahead of us. Not such a good showing, but I'll say it was one of the most exciting Wednesday night races we've had in quite some time. 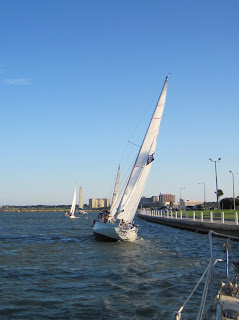 And it wasn't quite over yet. We couldn't point well after we rounded the green cans at the gap. We tried to pinch, but I gave it up and fell off to gain speed. We tacked for a short distance, then tacked back towards the finish line. We were barely making it as we walked the wall towards the line and the finish right on Agape's heels. They are great competitors and we've enjoyed racing against them. Not bad company to have as we finished off our most exciting pursuit race yet!
Oh, and at the First Wednesday Social after the race, it seems that the other racers are enjoying the pursuit races as well. They took a vote, and even the PHRF racers are getting into the pursuit start. They decided to make every third Wednesday night a pursuit with spinnaker and non-spinnaker fleets. Way to go Bruce!