Dinner With The Watson's 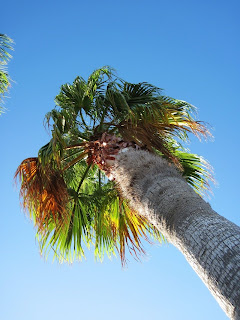 Bruce and I had no plans for the weekend. I've been out of town for work this past week and was glad for the open weekend, one of a few this summer. We got a call from Clay with an invitation to join his family for a Shrimp Boil on Saturday. We quickly accepted! 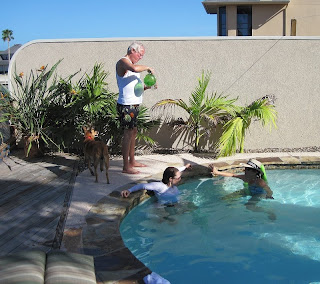 The Watson Sr's have added a pool to their back deck since we were last there. They are members of some "Palm Society" here in CC and have landscaped their back yard with many different types, all lending to the "Island" theme. 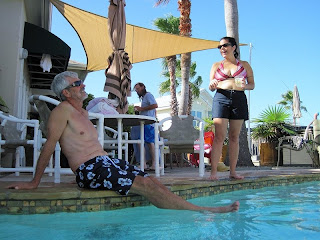 We arrived at just after 2pm and found the party already in progress. Susie's family was there. We met her Sister and her children, who were all very interesting to talk to. We lounged in and around the pool all afternoon... 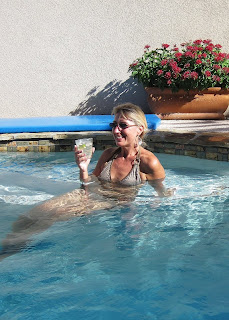 The sun eventually made it's way behind the house leaving the deck in comfortable shadow. 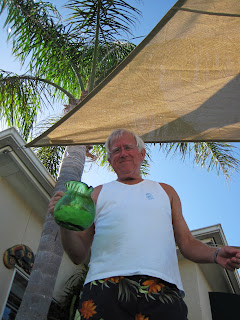 Dr. John was the ever vigilant host making sure that no glass went unfilled. He brought out pitcher after pitcher of his signature drink, a concoction of tequila, soda and lime that was light and refreshing and perfect for an afternoon in August. 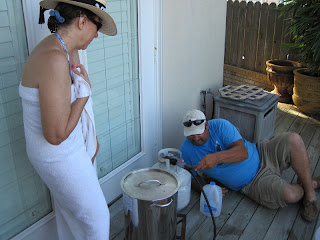 Once it cooled off, the Boiling of shrimp began. Shrimp, sausage, potatoes, garlic, onion, celery and seasonings all went into the pot to make a scrumptious dinner. 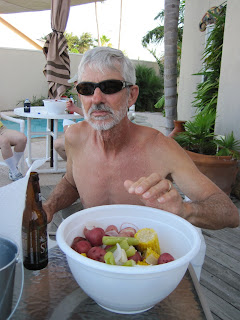 We sat down and dug in! Each table had it's own pot and there was probably enough food for at least another 5 or 10 guests. 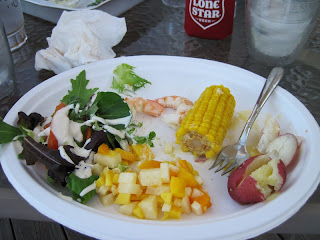 There was an interesting fruit salad to go with it with mangoes, oranges and some kind of root... Jicama? I think it was??? http://en.wikipedia.org/wiki/Jicama It was pretty good and I always enjoy trying new things. 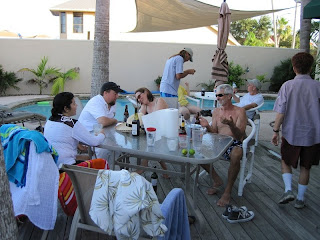 After dinner, we all continued to sit around on the deck while Bruce and Catherine engaged in a deep discussion on many subjects all with the goal of solving the problems of the world. Bruce was very impressed that he had found people who could discuss these things with knowledge and without becoming adversarial. It was a great time for him and I appreciated the opportunity to sit back and let it all wash over me. Once the sun went down, people began to get back into the pool and we took the cue to make our departure. I did a bit to help clean up the mess and we said our goodbyes with a promise to return the favor next weekend. We now have a ready made crew for the BYC Commodores Cup Regatta! Thanks to the Watson's for a very relaxing and fun afternoon away from it all!