Board Boats and Burgers 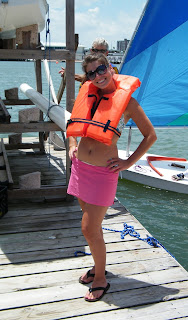 Every year, Neil and Teresa put on the Board Boats and Burgers event at BYC. This is our second time to attend and I was layin' low... Last year I took a turn about with Neil aboard one of the Sunfish and decided the time wasn't right. This year, I put Brittney forth in my place to learn to sail. 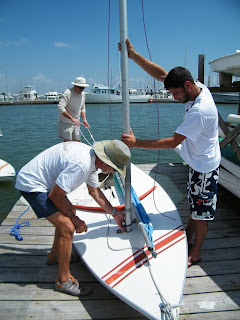 Bruce and I arrived just after Neil and Teresa and helped them set up the Club and the boats. 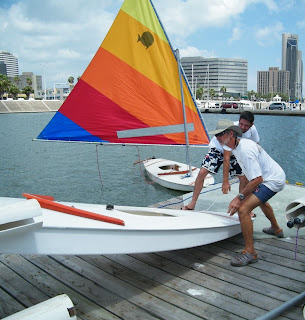 Matt pitched in and began the process of learning how to assemble these lightweight little boats. The winds were blowing a nice steady 10 knots when we began this day. 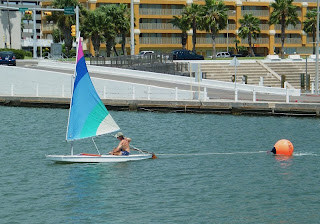 Bruce took out one of the assembled boats and set up the course markers. There was to be no formal racing this year, but they put out the marks to give the sailors someplace to go. 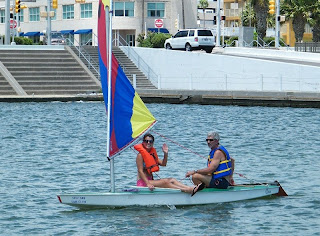 We watched as some of the other Club Members took the boats out first. Then came Brittney's turn. Bruce took her out and sailed the marks a few times to give her the feel. I watched from the sidelines and took pictures and visited with the guys. The next thing I knew I looked out and saw that Brittney had the tiller! 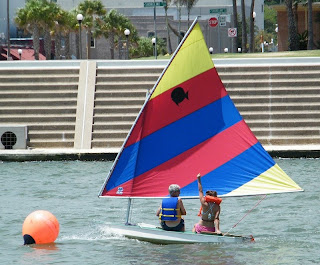 It seemed like she was doing well as I watched her go around the course a few times with only a minor bobble or two. She impressed Neil with a jibe around the near marker. Even better... she looked like she was enjoying it! 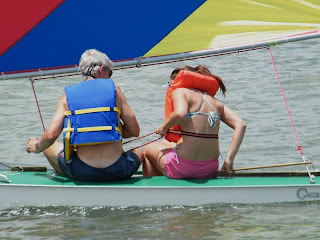 She did a few turns around the course and then Bruce gave her the sheet. She was doing it on her own! I was impressed doubly by the ease with which Brittney was picking this up and by Bruce's method of teaching her to do it by taking her through steps, first a ride, then the tiller, then the tiller and the sheet. It made perfect sense. 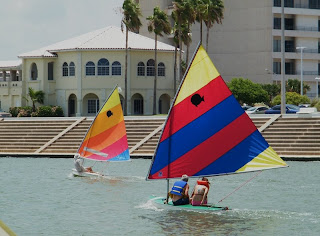 Now I said before that there were no organized races today, but this sure looks like Brittney trying to challenge this other Sunfish to the far mark... Look Out!!! She's after YOU! 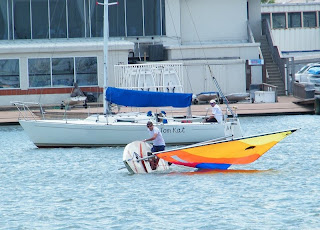 Other Club Members arrived so Brittney and Bruce gave up their boat for a while. I was offered a boat but declined again as I watched the action out there. A far better sailor than I was having a bit of difficulty with Doug motoring around on TomKat for moral support. I watched as Dean worked to get that boat back up and going and I was there to hear his complaints of water up his nose when he returned to shore... Maybe another day for me... 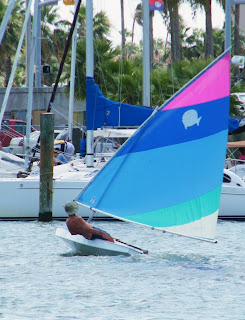 Besides... the winds were coming up and gusting. It was now every bit of 16 knots. Not a good day for a novice like myself to try to do this with witnesses. My "HotDog" husband got back out there and sailed around for a bit alone. What a show off! 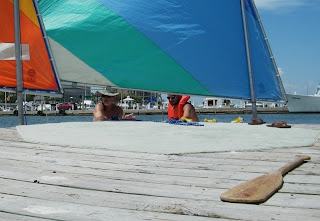 Next was Matt's turn to go out with Bruce. He seemed to be as nervous as I, but he was willing to try it. 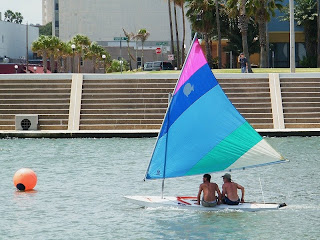 Out they went, round and round to get Mat used to the motion. They were out there for quite some time. It didn't look like Matt was getting his chance at the tiller... 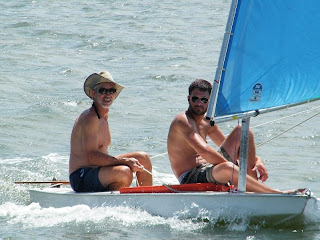 Bruce brought him back in and said that it was just too gusty to try to teach Matt today. Bummer! Oh well... there will be another day. Maybe one that doesn't boast record heat to go with the rising winds. We hung out for a while longer watching the other sailors mess around. As the afternoon progressed, we all went back home to soak up some AC and take a nap before returning to the Club for the "Burgers" portion of this event. Neil and Teresa worked tirelessly all day to pull this together and it was a success! We had such a good day and I'm even more encouraged that we can make a sailor out of Brittney and Matt! Good times are here... and more good times are coming!