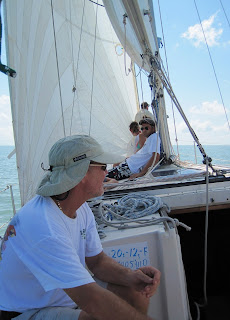 Many boats here in Corpus Christi have a hard time finding enough crew to do the races. This Navy Regatta, Bruce had a hard time picking from near 20 friends and family that wanted to do the race. We ended up with several of our "A list" bowing out when we told them that we had a dilemma. 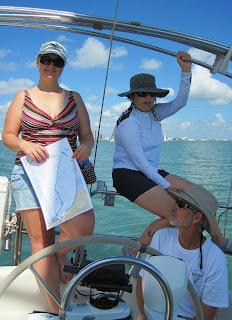 We began this beautiful race day with a boat boasting of 9 of our friends and family promising a fun time and a pleasant race. Both of my daughters were here for the event. Rounding out the crew were Clay and Krystal, Steve, Matt, Brett with the lovely Kim at his side, and our most special guest... Chuck, who was the best man at our wedding 6 years ago. 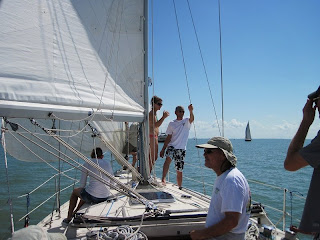 The winds were to be perfect for the weekend regatta. It's the 48th running of the Navy Day Regatta and Admiral's Cup and Bruce and I have entered our boat or sailed aboard other boats every year since we met. Today would be a race out around markers 3, 19, 12 and then finish at the committee boat outside the breakwater at the NAS CC. 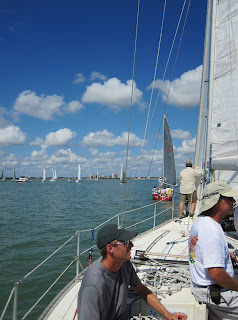 There are 38 boats entered in the Regatta in 5 classes. We entered the 150 A Class with 4 other boats competing against us. We were all excited about the race and in high spirits as we paced with other boats awaiting the start just after noon. We were lucky this year. The winds howled last year and beat us all up. Many years before, the winds have been non-existent and the race was delayed again and again. 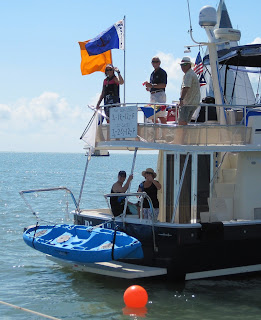 Today, it was perfect as we found ourselves in the best possible starting position as the horn blew signifying the beginning of our start. We waved past the committee boat as we ran up the line with other boats falling in behind us. 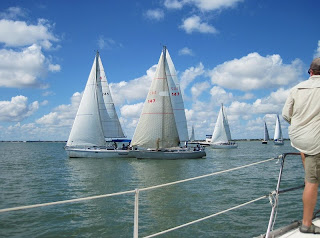 Bruce had the boat right up to the far pin at just the right time and off we went! 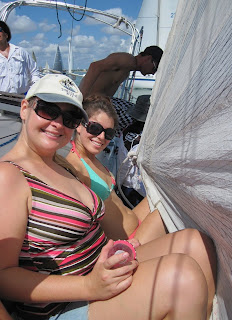 Time to settle the crew in position to get the best speed we could. With today's light winds, that meant sitting the low side. This is not often the case here on our Bay. Today, it was nice to be mostly out of the beating sunshine. It did make for a somewhat limited view of the race and the beautiful Bay, however. 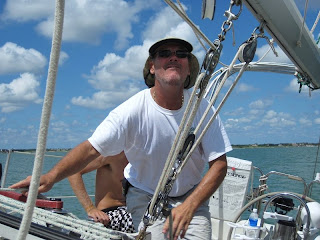 Chuck was our main sheet man for the weekend. He knows a lot about sailing but confessed that he doesn't know a lot about making sailboats go fast. Chuck is my kind of guy. He's just out to have a good time whatever happens. 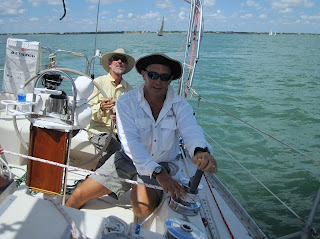 We had Steve to perfect sail trim. He, unlike Chuck, does know how to make sailboats go fast. He is forever trimming and tweaking things to get every bit of speed possible out of these old sails. 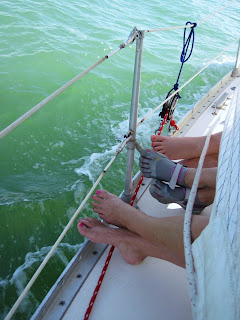 Meanwhile, those of us who are movable ballast today, listened for sounds of impending tacks while hiding out behind the sails. As the day progressed and we made our way around the course, one by one, we were picked off to sit the high side. 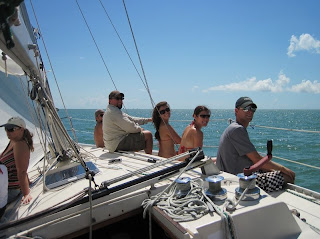 The winds were building which required more weight on the rail... movable ballast. For several years, sailing on our Bay has suffered from a lack of participation. Lately we've seen a reversal in this trend. We are all trying to get our young people out to enjoy racing and sailing in general. Young people have no boats... older people with boats have no crew... get them together and you have good times! 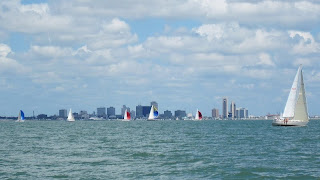 The view from the high side is much better. We were now able to look back at the spinnaker fleet as they rounded their mark and took off for their next one. Their course was inclusive of a downwind leg to give them the opportunity to use their spinnakers both days instead of just the return race on Sunday. 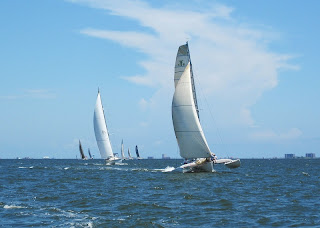 were making good time and it was close racing with two of our competitors, Sweet Lelani and Cheers. We kept our eye on them as they took the opposite tack. When we crossed paths, we were finally out ahead of Cheers. We rounded the final mark and turned towards the finish line with only Passion, who wasn't in our fleet, and Sweet Lelani ahead of us. We crossed the finish line jubilantly with a view of more than 30 boats following behind on the glistening Bay. 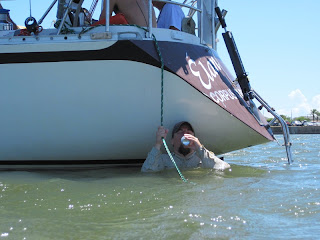 We quickly doused the sails, motored into the protected breakwater and found a spot to anchor near BYC friends from the "Cruising Fleet". We put up the bimini, got out the beverages and jumped into the welcoming water. It wasn't quite a sweltering day, but it was hot! 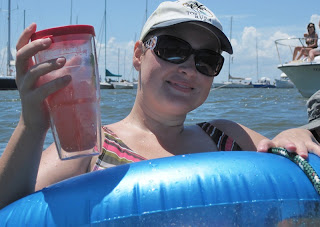 Out came the tasty Rum Punch, lovingly prepared early that morning and kept icy cold for just this moment! 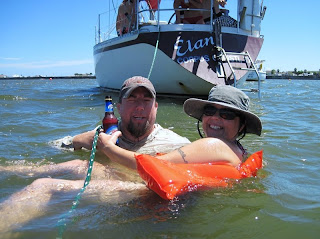 Clay and Krystal had to leave for Houston soon. They had only an hour to enjoy the fruits of their labor before they needed to be on the road. When the hour came and went finding them still floating... we knew it was a good time. 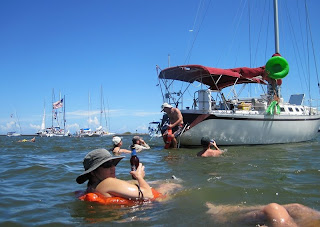 There's not a lot I can say about our time in the water... floating and laughing. It's kind of one of those "you had to be there" sort of things. 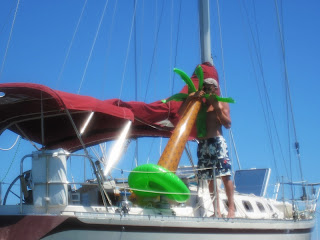 The toys came out... The kids blew up the floaties. It was just about the time that the last one was being inflated, that Clay came drifting over to me to ask when we were going to tell them that we had an electric inflater to blow up all of those things. I told him we weren't! 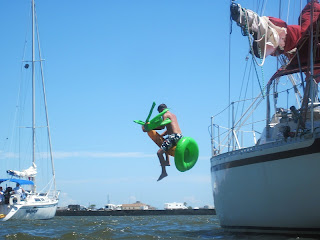 I had thought the Palm Tree had been retired after the Memorial Day Cruise. It's been looking a little sick for the last several floating events... This might really be it's last hurrah! 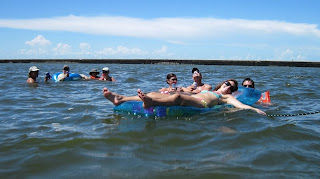 We whiled away those lazy hours of the afternoon awaiting the start of the Titanic Cup Races. 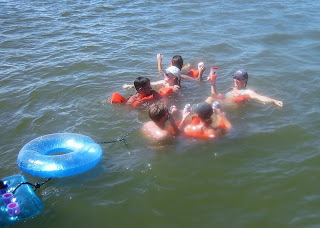 Clay and Krystal got out and began getting ready to leave for Houston. They decided they would stay to see the races. 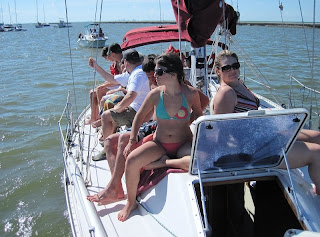 We all got out and settled ourselves on deck for the show. 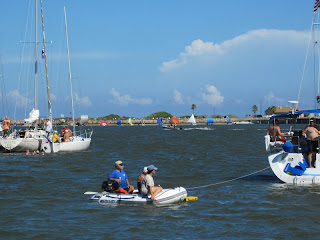 There was a late start probably due to the unprecedented number of entries in this "anything that floats but a boat" race. The Titanic Cup Competition has been a part of the Navy Regatta for as long as I can remember. Navy personnel are given a limit of $100 to purchase materials to build their "boats". It's amazing that these people not only don't drown, but the entries keep getting better each year. 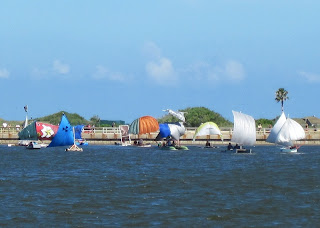 The entries lined up at the far end of the anchorage and made their start. Some never got off the starting line... but many did! They began blowing down the straight-a-way towards the finish. 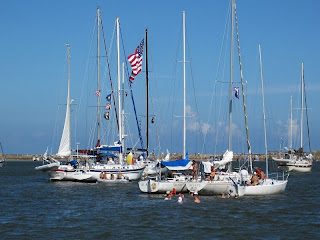 Sailboat spectators were lined up watching and cheering them on! 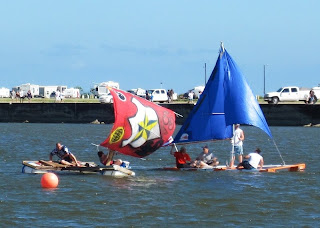 These contraptions were crazy looking and all very unique. Some of the racers even went so far as to wear costumes! 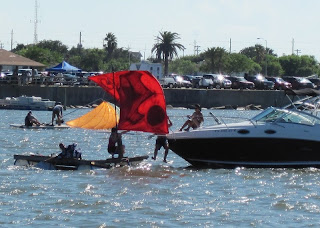 There was a lot of excitement even after the first three places were announced. This boat came a bit wide of the course and smacked right into this anchored motor boat. I'm not sure if the guy dangling in the water at the bow was off of the sailboat or the motor boat. 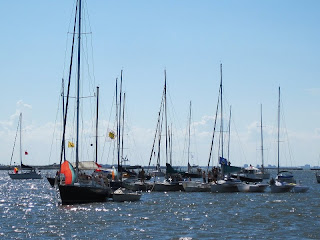 The sailboats that had anchored at the other end of the field were in poor position to witness the zany antics of these once proud Servicemen and Women. We cheered the final stragglers on and waited for EVER for a shuttle boat to come take us to shore for much needed showers. We didn't fill the water tanks on Elan this year. It's an annual battle between Bruce and I... speed vs shower water. I gave in this year and we took our showers at the pool facilities on the Base. 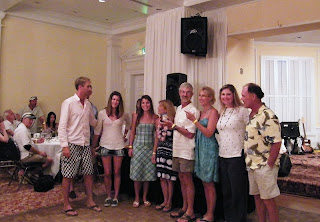 We made our way to the "O Club" just in time to make the food line. The food was similar to that in years past but maybe a bit of an upgrade. The wine was free but we were all so thirsty after a hot day on the water, we drank tea and water water water! One of the BYC women had been carted off to the the ER during the Starter Party on Friday night for dehydration. Let's take the hint! The music was good, but loud so as to make any conversation attempts futile. We finished our dinner and eagerly awaited the awards portion of the evening. We did not wait in vain... we placed second in our fleet! Yay! We were thrilled! It had been a perfect day for racing and the party promised to continue into the night, but not for us. We were tired and so the crew left Bruce and Chuck to mind the boat for the night and made our way home. The kids got a second wind and went out clubbing while I went off to bed. We had to do this all over again tomorrow! Hopefully with another trophy thrown in!