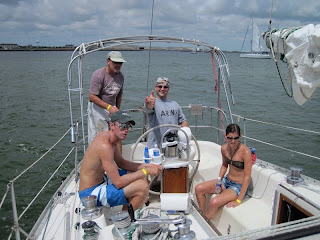 Day 2 of this weekend's Regatta promised to be just as perfect for sailing as the first. We had a later start than yesterday. Our Skipper, Paul, is only a week back in the US from a tour of duty in Iraq. We had no Military person lined up to serve as helmsman, so Matt invited Paul to drive down from San Antonio to join us. He lost no time in getting down here. 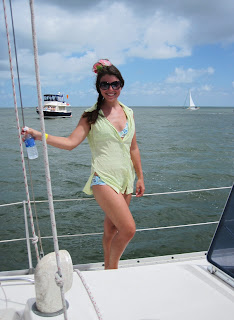 The kids had all gone out clubbing on Saturday night after the awards banquet on the Base. I was worried that they might not make it out this morning. There have been many years in the past in which this was the case. We had nothing to fear as all of our crew showed up on time and in good spirits. 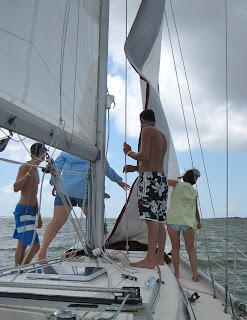 We were all shuttled out to Elan just in time to weigh anchor and get out to the start line. Everyone pitched in to get the head sail changed out for today's race. 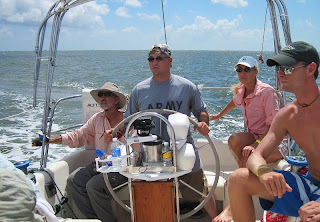 Bruce was a bit worried that Paul would be timid behind the wheel. We never know what we will get with blind crew assignments... how could this be any different? I was trusted to help Paul get acquainted with the helm while Bruce worked on other things. He was a bit nervous at first... "Is it supposed to tip over like this"?!! Once Bruce explained that the wind could not push the boat over and got Chuck lined out on the main sheet, Paul calmed down a bit. 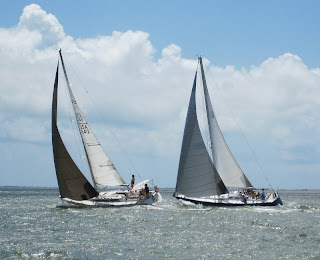 I'm fine with helping the helmsman out, but I'm not a very aggressive starter. I am more likely to keep us out of the fray than to get us into a tight starting position. I asked Bruce to come back and tell Paul where he wanted us to be. He did this and I translated it into "non-sailor" terms for Paul. 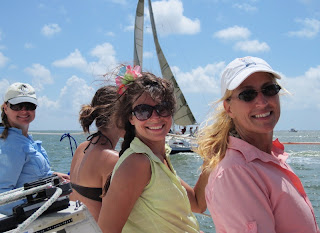 Once we were over the start line, I went up to sit the rail with the rest of the crew. There really wasn't much for Bruce to do on foredeck at present, so it made no sense for him to sit the rail when he could be back with Paul calling strategy and keeping watch on things. 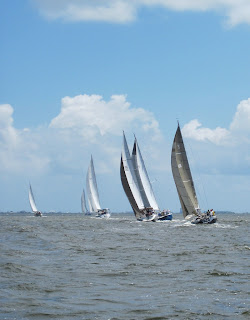 We had an easy course today. Only one mark, #12, which took us a short hop to weather. Paul was still getting the hang of it and we slowly fell behind the other boats in our fleet.We rounded the mark as the next fleet of racers closed in. 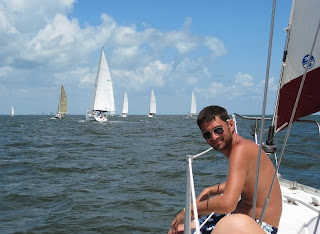 Now was the time for the long, hot downwind trek. We started near the back of the non-spinnaker boats and slowly made our way up through the pack. 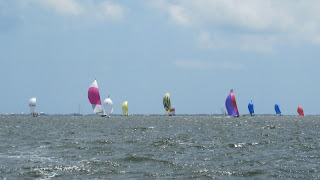 We looked back behind us and saw the colorful spinnakers begin to pop out on the horizon like child's toys. 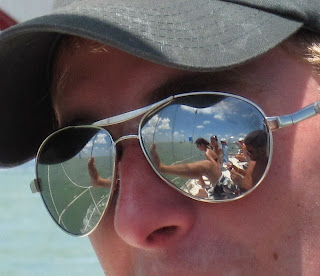 The sun baked our already sunburned shoulders... the late night and hard day behind us began to take it's toll... For a while, I felt like there should be harmonica music and buzzards in flight. 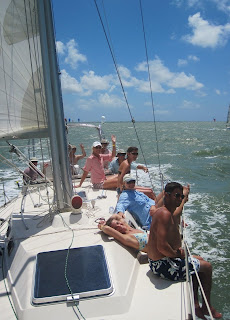 But, as our spirits lifted with our rise through the field of racers, we began to think towards the finish again. We could still place in this race... all we had to do was adjust the sails and get some speed. The foredeck sprung into action, throwing the jib over to the other side so we could go wing-on-wing. 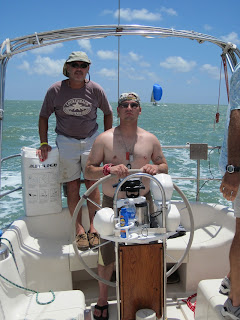 This helped us to leap ahead and made our advance even more threatening to our competition. Chuck took his turn at coaching Paul. I heard Chuck say somewhere along the way... "I know how to make a sailboat go... I just don't know how to make it go very fast"! But, Chuck has a way of talking in a low, comforting, patient way that is very good for a newbie at the helm. 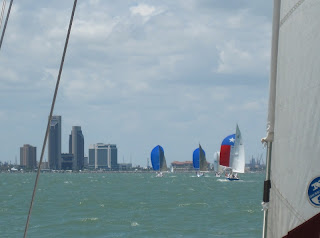 Before long, we began to see the boats out ahead of us converge at the Gap. I spent some time behind Paul and noticed that he really was doing a good job of anticipating and correcting for the following seas we were getting. There are many people who sail often that can't do this. I think Paul's a natural. 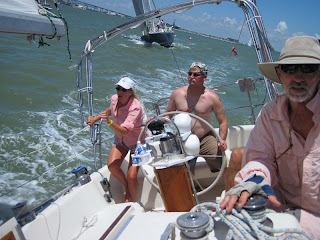 We followed the parade in through the Gap and made our turn around the green cans. Once inside, we went hard to weather. The crew finished trimming sails and went to the high side rail, leaving me down with Paul to talk him through the finish. Steve was there to trim the sails and keep us going fast. It was an exciting time and Paul did great! 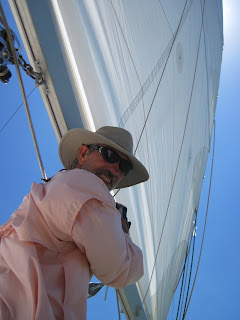 We crossed the finish line and got our horn and I took over the helm to give Paul a much needed chance to relax. He opted for being jubilant instead! The crew sprang into action as we did the usual take down after a race. Bruce was happy with our finish and eating his worried words from before the race. 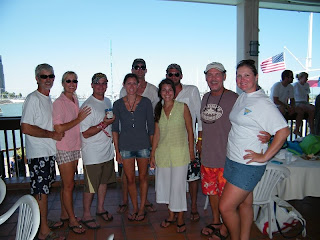 We all retired to the CCYC to relax in the shade upstairs on the pool deck where we were to discover we had secured a 3rd place finish today! We were not too sure we had a place so 3rd was just fine with us. And so closes another Navy Day Regatta... relegated to it's place in memory as another great "Military Challenge"!