Room At The Mark! 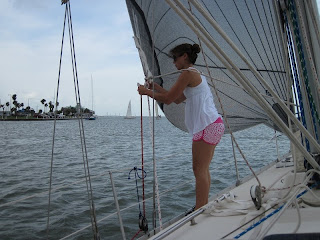 The day was rainy. It poured the whole first half. Suddenly, in mid afternoon... it stopped. There were still clouds around, but it looked like we were going to be able to get out and sail! Brittney has moved home and has settled right in this week. Steve had her out there hooking sheets up to the sail before we were even out of the gap. 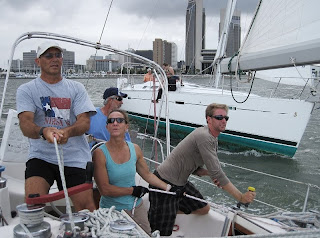 We had only two boats in our fleet. Milky Way, and us. There were 10 boats total out tonight. Brett is back from his summer travels and we're glad to have him aboard. He fell right back into his duties. We had a very close start and fought boat for boat at the gap to see which boat would make it out first. We squeaked by Milky Way and headed for the first mark. 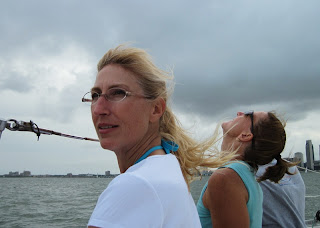 The fleets split, Milky Way went right, we went left. We sat the high side in the gentle breeze. It felt like Fall. No heat, not so humid. It was fabulous out there tonight! 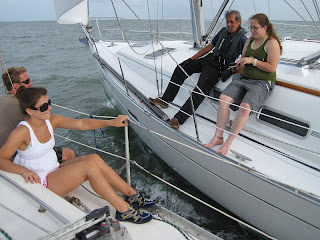 We tacked over to the lay line for marker #2 and caught a dramatic 45 degree wind shift against us. We had to scramble to tack to minimize lost ground. This shift was in MW's favor and we were both charging to the mark. We tacked right as they were coming up to it and we had some tense times. Bruce assures me that he was not nervous at all and that we were in complete control. 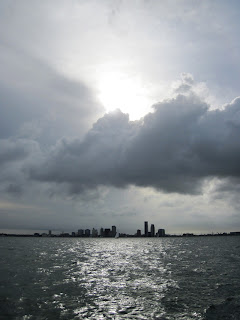 It was beautiful looking back towards our beloved CC with the dramatic cloud cover and the lowering sun. The boats starting after us were slowly catching up. 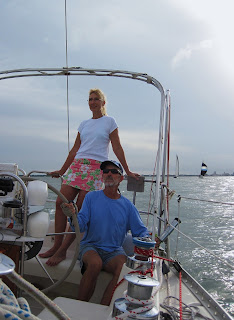 Bruce was in his element with Steve trimming sails and plenty of people on the rail. What a way to break up a brutal work week!

There was a bit more excitement as we came near the second mark. I realized that nearly the whole fleet was converging on the mark at the same time. I got it all on digital for your enjoyment... 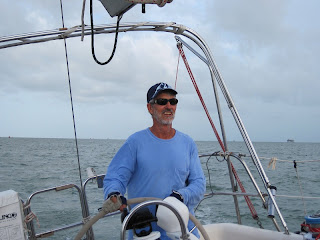 There were no casualties... this is after all... sailboat racing. We had a beautiful sail back to the finish. We had some more tense times inside the gap as the winds had been steadily dropping. The winds were on our nose and we had to tack our way to the line. 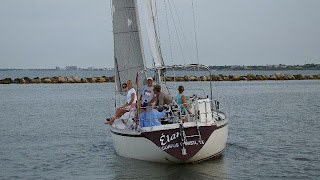 We had a total wind shift of 90 degrees by the end of the race. We ghosted over the line and headed for the slip where we enjoyed another hour with friends on this strangely fall-like evening.