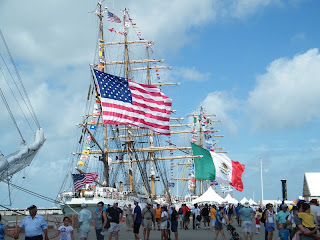 Once again, back out to the Tall Ships Venue to catch a tour on the ships we missed the previous day. Our plan was to volunteer for another couple of hours then tour the remaining ships. But when we got there, things weren't yet in full swing and there really was no need for our services. So we went ahead and boarded the Esmeralda from Chile. 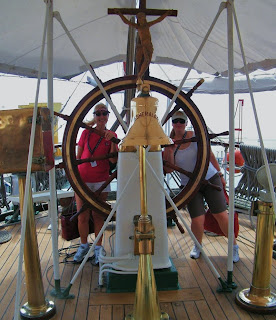 It was Sunday so of course they had just finished their Worship Services at the bow with a fresh breeze blowing off the Ship Channel and the decks covered by shade. 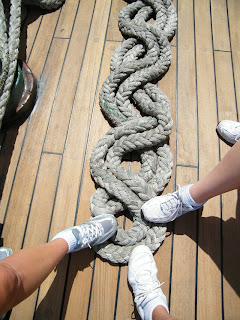 We were harder to impress by this time but found this to be interesting. You know we've gotta get in the "feet" pictures. 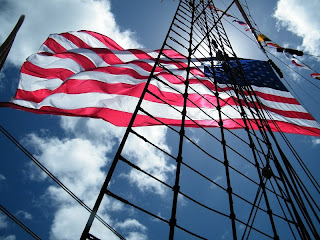 Next we boarded the US Eagle. We were a little disappointed but not surprised by the typical increased restrictions aboard our native ship. The other ships allowed people to touch almost everything within reach above decks. The US ship, not so much. Most things were roped off with Cadets standing watch to make sure that no one got out of line. They were pleasant enough when engaged but there was an overall feeling of "hands off". We did find some things to play with however, so we went away happy enough. 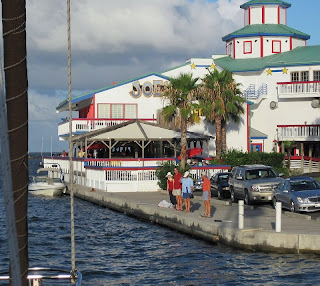 We decided against touring the final ship and the smallest of the four. Time was getting on and we had some things to do in preparation for our evening sail aboard Adagio. We were to leave the dock no later than 7:30 pm in order to make it across the Bay in time to see the fireworks at NAS Ingleside. We had trouble finding parking so we left the dock and picked up Bruce, Mark and Laura and Johnny on the other T-head where parking wasn't so scarce. 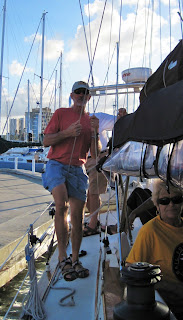 We pulled the big 46 ft. Irwin alongside the dock where our would-be passengers grabbed their gear and jumped aboard. Bruce was the last to make the leap and I thought he wouldn't make it, but he did... and we were off for a bouncing ride across the Bay. 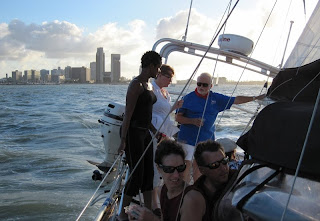 It was a beautiful evening and the boat was loaded with 20 people all in high spirits. We made a few tacks as we tried to get to our destination by 9:30 when the fireworks would begin. 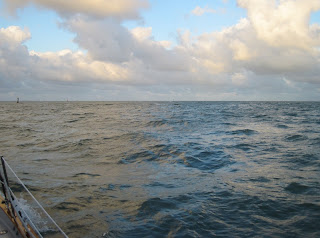 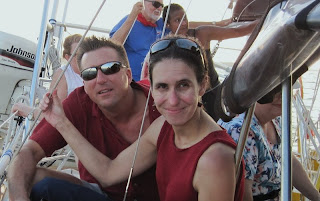 After talking to Mark for a while, he asked where we were going. He had misunderstood the plan to be a short sail to watch the CC fireworks display. Once he was told that we were going to Ingleside, it all made better sense... He laughingly said that he just thought we were all "hard core" sailors. 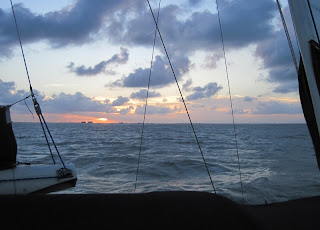 It was a wet ride for those of us on the high side rail. Somebody had to do it... might as well be us. 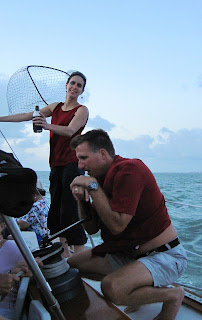 Laura seemed to be enjoying herself and Mark did a marvelous job of jumping right in and introducing himself to our BYC friends. He had them all laughing before long. 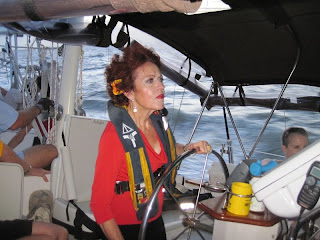 Our fearless hostess, Aleta took the helm for a while so that Dean could make sure we had the sails trimmed out just right in order to get the most from them. We ended up starting the motor anyway. We were running out of time! 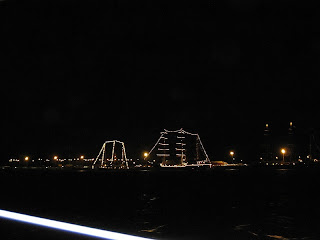 We neared our destination and had some traffic to contend with as night fell. We could see the fireworks further up the channel in Port A or Aransas Pass and our hostess was frantic to get us in position to see the Ingleside display. We were just sailing up on the Tall Ship venue when the sky lit up! We made it in perfect time. A cheer went up for our host. 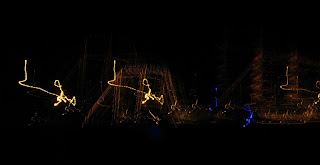 My pictures of the fireworks weren't good but I salvaged a few that were at least interesting. We watched in awe as the display went on. We passed very near and suddenly there was a tanker silently ghosting between us and the Tall Ships. It had not shown up on the AIS for some reason and we passed it within 20 ft.

It was crazy! Then it was gone, and we continued to enjoy the pyrotechnics until the end. 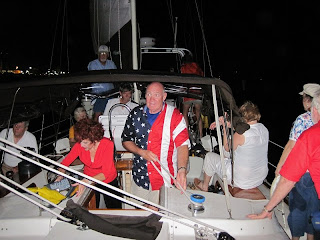 We turned our nose towards home and made speedy time back across the Bay to CC. The crew was all in gear as we were on the lookout for obstacles in the Bay. We made use of the star and planet apps on the iPhones. It was a beautiful night. All too soon, the stars faded as we neared the city and pulled into the dock 45 minutes ahead of the anticipated arrival time. We said our good-byes to host and hostess, and were in bed by midnight. What a wonderful fun filled 4th!