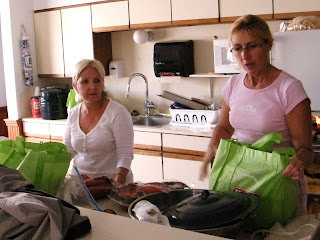 Bruce and I, along with good friends Mark and Brenda, were the cooks for this week's BYC Dinner. We signed up weeks ago and made an offhand plan to do a shrimp boil. Mark was turning over and over in his mind, a way to logistically get all of the food done at one time. We had received RSVPs for 55 people. Brenda and I got all the groceries in the morning to go with the 30 lbs of shrimp Bruce brought from the Polly Anna on Friday.

I've never cooked for this number of people before but it made sense to just multiply out the normal recipe to cover about 60 servings. 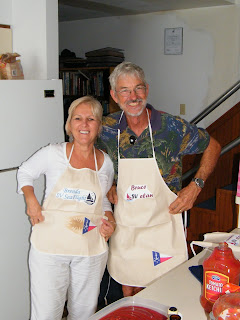 We all piled into the BYC ketchen to cut up the ingredients and prepare the fixin's. Brenda presented us with aprons she had made. They were too cute! We were stylin'! 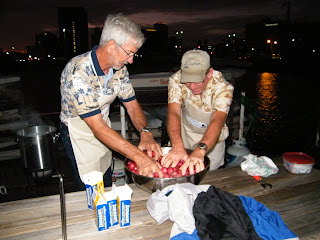 Mark was pretty much in charge of the plan after the prep work was done. Bruce helped him out back on the three propane cookers. They piled in the vegies along with the seasonings first. There was a mountain of potatos. 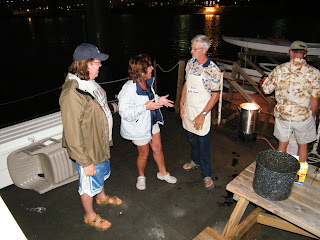 Shortly into the evening, we were surprised by the arrival of our old friends Karl and Jan. What a surprise that they were the last minute additions to the RSVP list. It was so good to see them again. 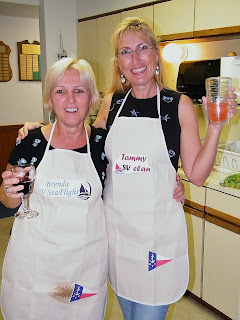 We all worked like crazy to keep things going between the kitchen and the boiling pots. Brenda was stationed inside, Mark outside with Bruce's help, and I buzzed back and forth. 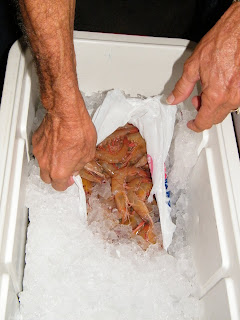 Dinner time was closing in, the guests had all arrived. We had exactly the number of people present as had RSVP'd. A triumph I can assure you! Finally all of the vegies were done and keeping warm in the kitchen, the bread was warming and the salad was laid out. It was time to put on the 30 lbs of shrimp. 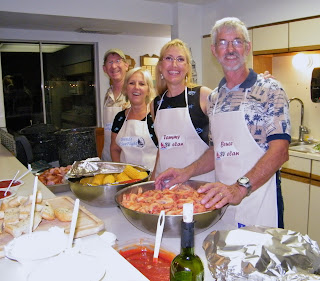 The shrimps cooked fast and we brought them in amidst OOohs and AAahhs! We set up our serving line and the croud formed a line. Our final worry was that there would not be enough of something. We filled the plates one by one... The line filed down as did the noise. By the time we had everyone fed, it was practically silent in the room. Everyone was happily munching away. 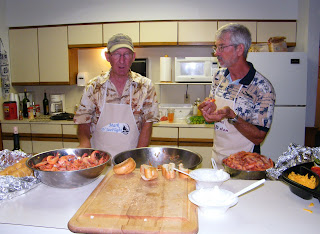 We had plenty of everything and even more shrimp than we needed. I took the shrimp bowl around and offered heaping second helpings. Finally it was our turn to eat. The guys fell upon the shrimp pile with gusto! It was very fresh and delicious. Thanks Polly Anna!
After dinner, the party cranked up and we had lots of kudos from everyone. I don't remember such a fuss being made over any other dinner to date. Maybe it really was great! Anyway, we had happy tummies, leftovers but not too many, and the club made a few bucks to top off what I would definately call... a SUCCESS!