Beautiful Fall Evenings on the Bay

We got lucky again this week with a near carbon copy of last Wednesday's race... except maybe there were a few more boats out tonight. The sun went down before the start but the twilight was so deep pink/purple/blue, it was not missed. 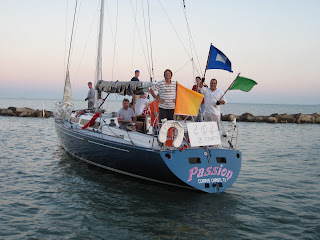 Passion was race committee and they have their own way of doing things. They don't need to ditch the race... their Santa Cruz 50 goes so fast around the marks, they start all the boats, then rush around the course and are there at the finish to call time for the other racers. 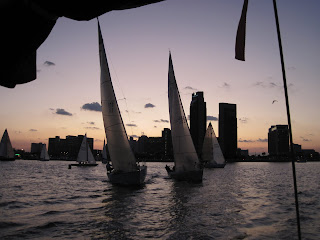 Bruce cleaned the bottom of Elan and we got a pretty good start. 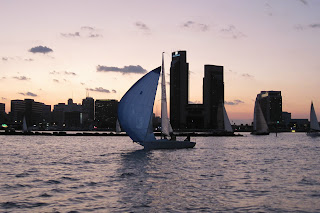 The winds were out of the north/northeast so it was a spinaker run to the first mark after leaving the gap. We were not in the spinaker fleet however so these boats quickly caught up with us. 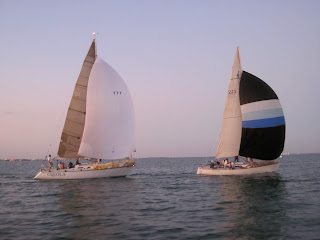 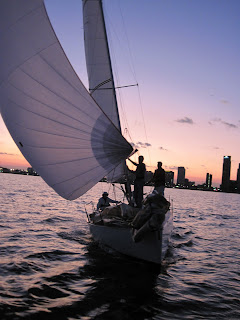 Leaving us in the dark to make our lonely way around the marks.

The winds were very light and became less and less as we rounded #2 and then #10. 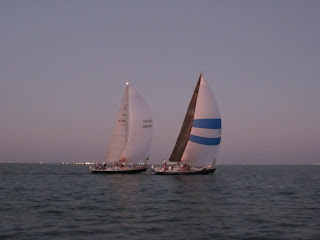 By the time we got to 10 it was very dark. We couldn't even see it on this moonless night. We felt our way around until we finally spotted it very close. Steve thought we were headed for the barn, but no! We had one more lap around #2 before heading in. 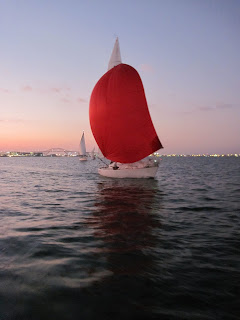 We were going under 2 kts and thought it would take us another 2 hours to drift in. But we made it in right about 8pm. It had been a fun evening laughing about stupid things with friends. My kind of sailing for sure.