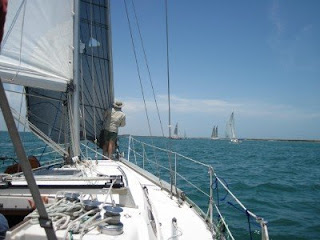 Bruce and I got together 6 of our friends to form a crew for the Rockport Yacht Club's 3rd Annual Lighthouse Regatta. We have never done this race before and we were really looking forward to it. We had attended the skipper's meeting in Rockport on Thursday night and it looked to be shaping up to be well attended. 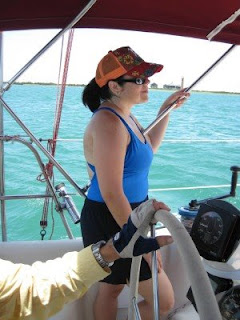 It was a beautiful day with wind... not normal for this time of year. The race start was just north of the lighthouse in the Lydia Ann channel. We joined about 25 other boats in the channel near 2pm as they all jockeyed for position at the start. 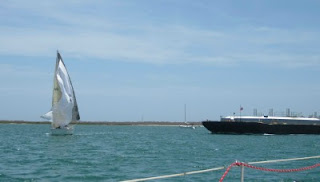 The Channel isn't so wide and there were a few anxious moments as we watched in horror as Tomcat struggled with their spinaker while sailing right into the path of an oncoming barge. They only got one honk of the horn instead of the "immenent danger" 5 blasts, but if you get the horn... you were in the wrong place! 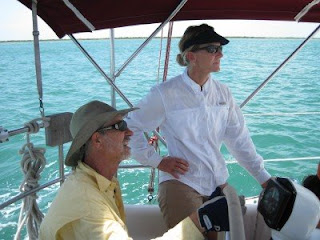 We had a 26 mile course ahead of us and it was getting crowded. We had chosen to be in the spinaker fleet for the day. Bruce said that we had enough able sailors to fly it. The winds were a bit high in my opinion, but the guys were gung ho. The girls were just happy that the bimini hadn't been struck yet. It was a warm day. But Bruce remembered to take it down at the start. Darn! 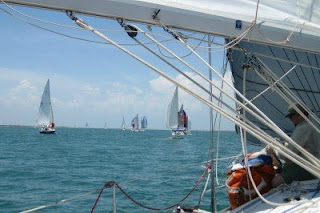 We didn't get a great start. There were a number of boats well ahead of us in the channel for a good stretch. 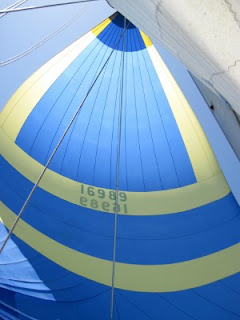 We managed to fly the spinaker comfortably in the channel as we moved up on boat after boat. 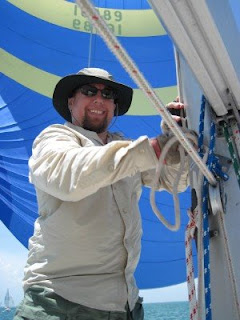 The guys trimmed and worket it. Clay was our foredeck man extraordinaire. 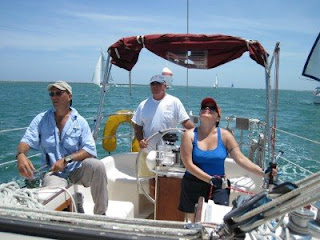 I began the race as the spinaker trimmer. Duties were assigned around. Everyone had theirs. Krystal was to assist me. I found her ready to take over so I gave her some instructions and let her go. I hung around for a bit watching her. She had it down! 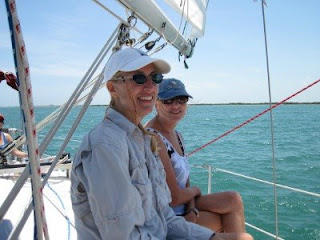 I was free! I've officially given over the job of spinaker sheet to Krystal. She's stuck with it until she can pass it on. I'm now rail fluff. I joined Patty in the shade on the rail to watch the race. 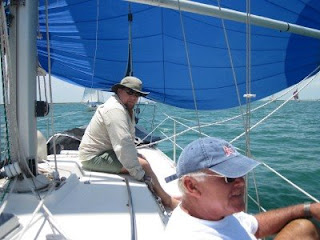 We had a long racecourse to go. It wasn't boring because all along the way, we watched the progress of our competition. 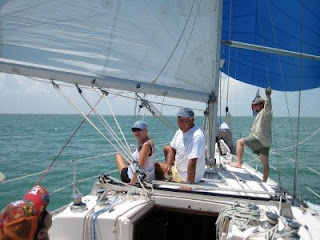 There was much discussion as to whether or not we could carry the spinaker once we made the turn at marker #71. We would turn to starboard and it was questionable. We began watching other boats that had made the turn to see if they were making it. 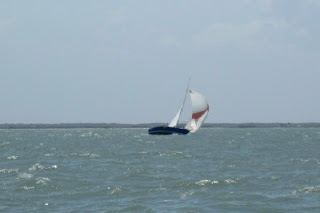 It looked like it would be possible so the decision was made. We rounded the mark and headed up. We were heeling and struggling a bit, but it seemed manageable. Just when it looked like we would settle in... the spinaker came down with a big POP! The shackle holding the sail to the halyard came loose and the guys had to bring it in fast to keep the sail from going into the water. We put up our jib quickly and got back on our way. We looked over to see this boat barely keeping it together with their spinaker. I was glad we had it down, although I wish it had been by choice. The rest of that leg was quite comfortable. 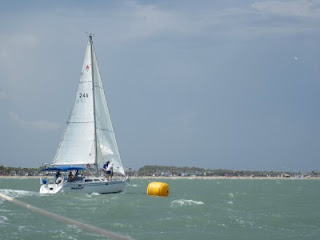 We went out and rounded a platform in the bay, then came back on a romping run to a marker near the shore. We were in heated battle with a couple of our competitors. Here you see Windswept just passed us to round the mark. 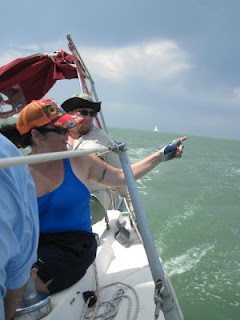 Then it was back up to a platform across the ICW. We were all sitting the rail. The winds were blowing and the clouds were looming dark and ominous. We wondered if we would make it in before the storm hit. 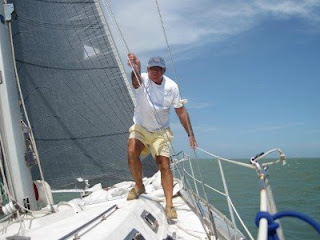 We rounded the platform and made our way for the barn. There were only a small handfull of boats that finished before us. We felt good about our race. Too bad we didn't have the spinaker for the bay portions of the race though. We felt we could have done much better than wing on wing. We really weren't set up with the correct sail configuration today. It had been an exciting day! 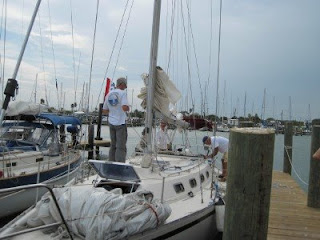 Once we were securely in our slip, Bruce wanted to get the sails folded and stowed. We had no rain... it passes us over and broke up. But Bruce was taking no chances. 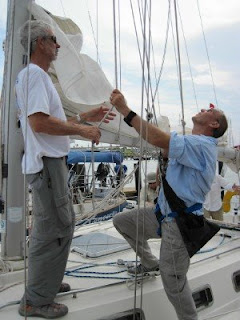 Steve volunteered to go up the mast to retrieve our spinaker halyard. Bruce was glad of it and took him up on the offier. 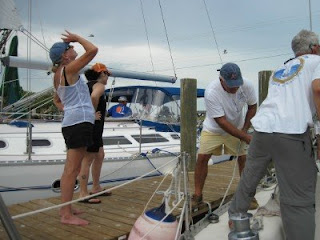 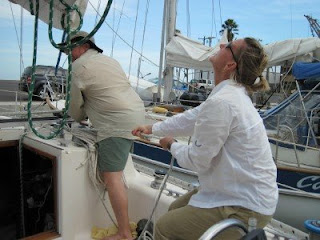 Jacque and Clay were slowly wenching him up. 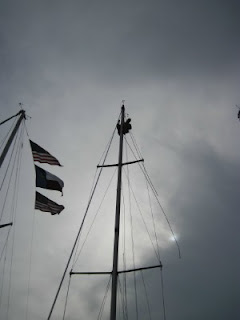 Once up at the top, Steve quickly grabbed the halyard and dropped back to the deck. Nothing was damaged... there was the shackle at the end of the halyard and the one attached to the spinaker. The one on the spinaker had broken. It wasn't really necessary anyway so no harm was done.
We finished upat the boat. Some of our crew left for home, Steve and Jacque joined us at the Rockport Yacht Club for the festivities and dinner.
We ended up with a third place trophy for the day's troubles and joined the BYC bunch as we swept the awards. We had done the club proud!