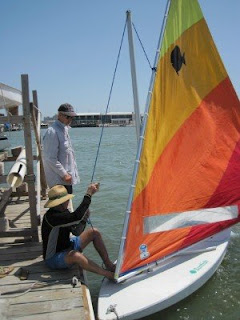 This was our only weekend with no plans in recent memory. It's funny how that just isn't possible... plans materialize. I spent the morning packing for Hawaii which is a week and a half away. I got things squared away and in manageable condition and we were free to play. BYC was holding their annual boards and dogs event. They have several sunfish. Larry was checking out people and making sure they were competent to take them out alone. Bruce is an old hand at it and was given the thumbs up easily. 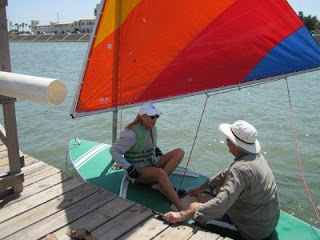 I, however... am a different story. I've never taken one out before. Neil was kind enough to take me for a spin. I got in the middle and off we went. I was nervous. 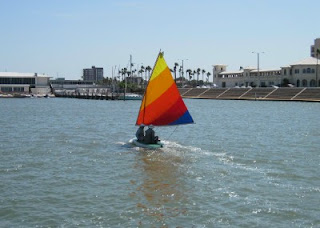 We took off down the course. I was getting the feel for it. It wasn't so bad after all. I got a little wobbly when the wind gusted but Neil did very well in keeping it pretty safe. 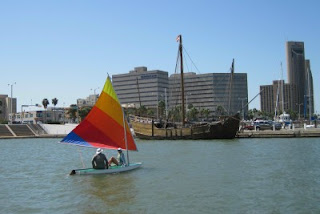 I began to think maybe I could do it when I remembered that they usually make you dump it over and right it by yourself before they approve you for solo. I'm thinking maybe Neil has plans to dump us when I decided that maybe today, with all of the club as witnesses... would not be the day. 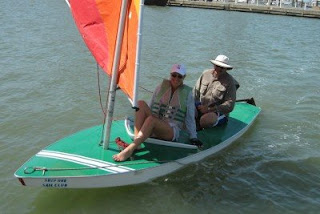 I asked Neil to take me back to the dock and I'ld try it out another day. 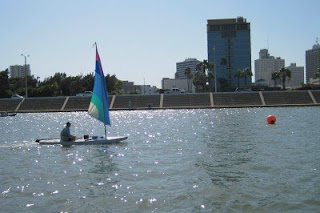 I got safely back on shore and watched as Bruce hot dogged back and forth on the course. 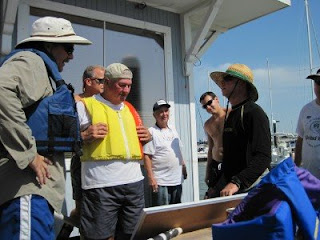 Larry finally decided it was time to call everyone in off the water and get the race started. The skipper's meeting was held on the back deck. They laid out the rules and set the heats. Bruce was in the first heat against Doug and Neil. He was sure he would be defeated. 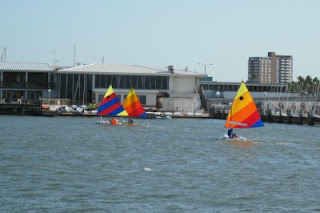 The starting sequence was 5 minutes and it was difficult to time it with no watch. Bruce was across the start line early and had to go back around. This was all it took... Doug and Neil were off and running. 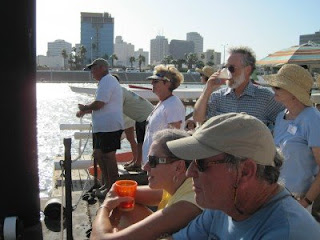 The crowds roared and cheered! It was all very exciting. The racers had to go up to a bouy near the CCYC and back to the one off our dock twice. Doug ended up the winner and moved on to the next heat. 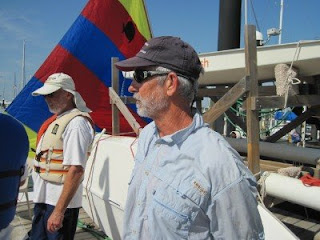 Bruce was defeated at the start and was relegated to the shore with the rest of the spectators. I felt kind of bad for him. It's been a long time since he had a sunfish out and he looked like he was having such a good time. 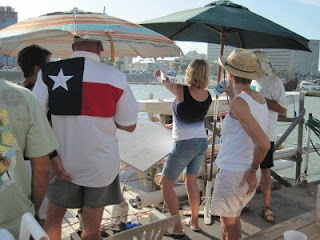 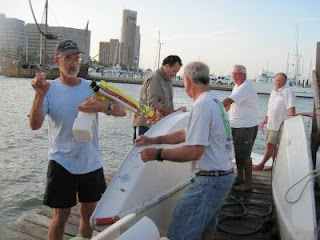 One by one, the racers were pared down to the finalists. Doug ended up the victor of the day. As they finished the racing, it was back to the party. The guys worked on putting the boats back in the racks. 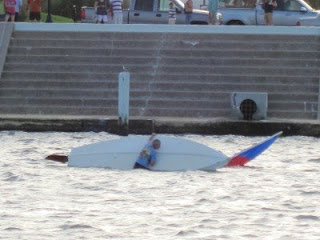 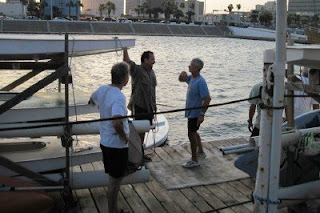 We watched as Bruce tried in vain to get it back out of the water. Neil and Larry took one of the sail-less boats out to rescue him. It was all very pitiful. Poor Bruce. He was all wet! They gave him a centerboard and he sailed the boat back to the dock. Here they are giving him crap about it all. Everyone had a good laugh about it though. It's such a good group. 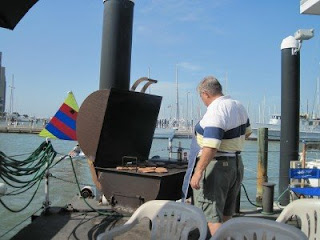 We turned our attention to the coming dinner. The burgers and dogs were on the grill. We all went inside to cool down and eat. It was a fun time. Once the sun went down, we migrated to the back porch again to enjoy the cool evening. A good time was had by all. Maybe next year I'll have learned how to sail a sunfish and will beat them all!