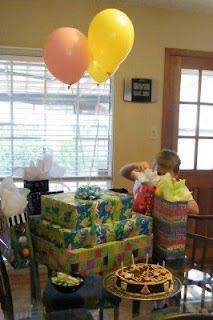 Our little family met over at Mark and Laura's house on Sunday to celebrate Nathan's 6th birthday and Laura's ?th birthday, which is 3 days after Nathan's. The gifts were all stacked on the table when Des dropped Nate off at home. He sped right over and began taking gifts out of the bags, beginning with the one on which his favorite cartoon character appeared. Unfortunately for Nate, the attractive bag held only a couple of pair of blue jeans, with which he was unimpressed... and the adults caught him before he had a chance to rip into another gift. Ahhh foiled again...! 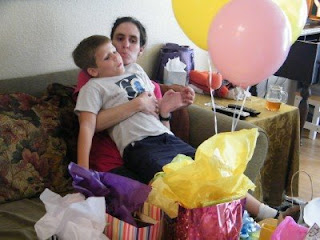 He was so excited! We chose to put him out of his misery a short time later by opting for the gift opening segment of the party first. All of the gifts were brought over to the living room where Laura took a moment to get Nate to breath and calm down a bit. 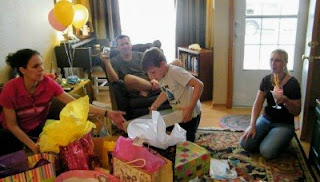 The gift that almost stopped the party was the WII... Mark had already been playing with it and so it was all set up. Nate had to just plug it in and play. The apple never falls far from the tree, it seems. We all remember our Dad played with our "good" gifts for days before giving them to us on Christmas. All of this was in order to assure our ease in setting them up of course. 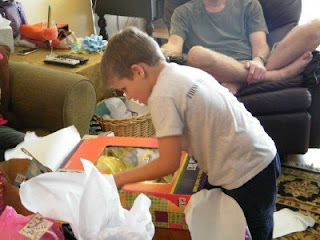 Nate finally got on with it and opened the rest of his gifts. Bruce and I had bought him a little tool set with a belt and hat so that he could work alongside his daddy on the next building project. I thought it was very cute... even if he didn't.

Once the last of Nate's gifts were seen and found lacking in favor of the WII... Nate turned his attention back to it. I suggested that maybe it would be nice if Nate waited until Laura had opened her gifts before playing with the WII. This precipitated the fit, caught here, which did him no good. Mark saw the wisdom of this suggestion (after seeing the look on Laura's face) and we got on with the gift opening. 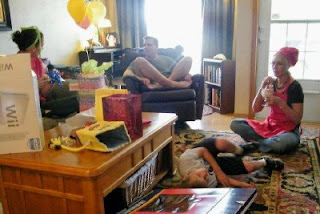 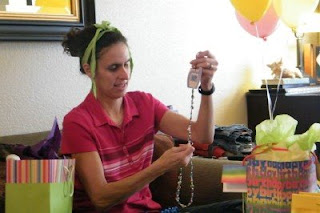 Laura opened hers quickly so as not to cause Nate to split a gut waiting to play his games. Carla got the prize for most useful and thoughtful gift when she gave Laura a beautiful bead lanyard to wear her medical ID badge on. Carla always comes up with the best gift. 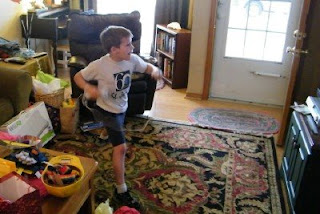 We all ate pizza while Nathan played WII boxing. It was kind of cool. He must have had some experience with it somewhere because he was really good at it. I guess there was some discussion about the pros and cons of having the WII. But, it does look like it will give Nate some exercise and hand-eye coordination skills at least. 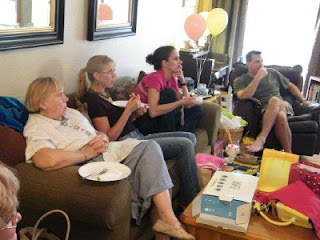 Everyone had a turn making up their own character. Most likely they won't be used by the person they represent, but at least they will populate the games with "real" people when Mark, Nate and Laura play. We did have a good time picking out face shapes, hair and eye colors, etc... it was good for a lot of laughs.

This is our little WII family in it's entirety. Top row are Laura and Bruce... then bottom row left to right are myself, Carla, Mother, Mark and Nate. 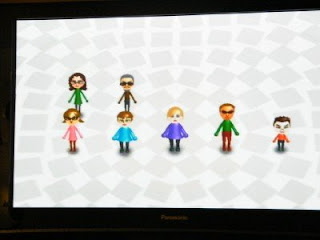 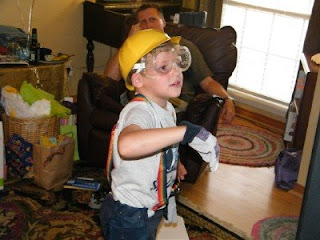 Nate had a chance to play with some of his other gifts while the adults were monopo- lising the WII. He put on all of the stuff from his tool set. He was really cute in his little hat, gloves safety goggles and suspenders. 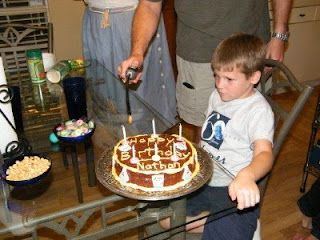 We turned our attention to the cake next. Mark brought out some kind of little blow torch to light the candles. Whatever happened to plain matches? Oh well, if you've got these things, you've gotta use them. Nathan looked mesmerized. I can just hear his thoughts... "just wait until Dad turns his back and I get my hands on that thing!" Oooh Nooooo! 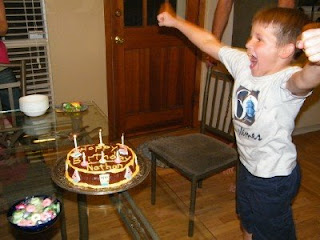 Next of course, Nathan blew out the candles. That's all six of them with one breath! Woo Woo! Here he is jubilant at his accomplishment. 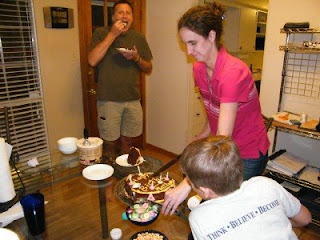 Laura officiated at the cutting and serving of the cake as a proper Mom should. She cut giant pieces... just like I like em! We all stuffed our faces with cake and icecream and the party wound down. Tomorrow was a work day, after all. And so... another birthday milestone has come and gone.