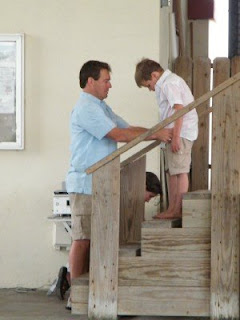 Melissa came to town for the weekend. She had some Easter days off. We had hopes of basking in the sun and working on that base tan in preparation for the BVI trip this June. It was not to be. We were at the boat for Desiree and Dave's wedding, which was scheduled for the 2:00 hour. I asked Bruce if he thought she was stressing out and bemoaning the cold, windy, cloudy day. He thought not.

We went over to the pavillion, where the festivities were being set up. We chatted and people-watched as guests gathered. The kids were having a great time running around as I remember doing with cousins when I was young. This is one of the regrets I have about my own kids' childhood... no cousins to run around with. 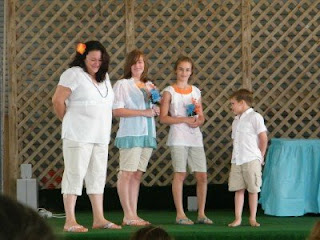 Bruce and Melissa went back to the boat to get some drinks and Karl and Jan showed up. That's when the ceremony began. I couldn't believe it! Bruce and I had missed Dave's first wedding because we were bringing the keg. We got there just as people were walking out. It looks like he's going to miss ALL of Dave's weddings!!! 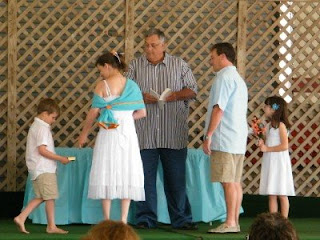 I watched alone as the kids filed onto the stage. Then the groom, and of course the Bride. Nathan was the ring bearer in his bare feet. You've just gotta love the simple weddings. He was so sheepish standing up there. Desiree told me that he had a note in his pocket with a list of all of the weddings he is in this year... Des', Laura's sister Anna's and Mark&Laura's. Popular boy! 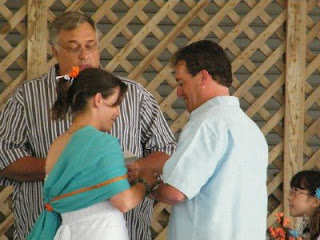 The ceremony was very short. When it was over, people milled around again and when Bruce and Melissa showed up, it looked very much like it had when he left. He couldn't believe it when I told him! He wanted to see the pictures to prove that I wasn't kidding. 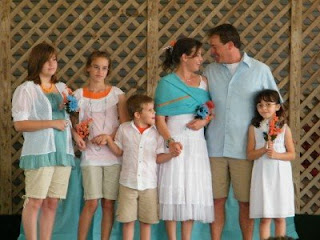 We hadn't planned to stay long, but we were having such a great time talking with Karl and Jan, the time passed quickly. The Bride and Groom were making their rounds and guests began to drift away. Before long, we were part of the last hangers on. Bruce told Des that her new husband, Dave is credited for Bruce and I being together. When Bruce first came to town, Dave was so nice to him. He took Bruce down to the bayfront on a Wednesday night and put him on Karl's boat where we met... and the rest is history. It was a very good day. We were happy to see the joy on their faces and remember the joy we felt on our own wedding day.