Last night I got a phone call from Steve. He is always good about checking in on Tuesday night to see if we are going to make it to the Wednesday night race with him on Cute Shoes. I was already about asleep when he called so the whole conversation is remembered through a fog. I can remember how he pulled out all the stops trying to convince me that the weather would be good enough for me to go out sailing. Remember, I've become a fair weather sailor of late. I finally gave in and committed to sailing tonight. 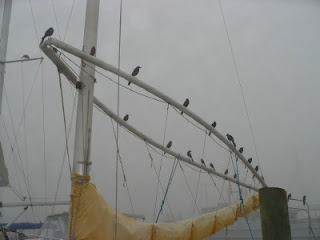 I left work early and raced home to get bundled up and have a quick bite to eat. The races start a half hour earlier in the wintertime. As we drove towards the bayfront, we began to notice that there was a thickening fog. There were birds lined up all along the tops of the light poles. We noticed that the birds were perched on the spreaders on most of the boats. When we parked and began to walk down the dock towards Bay Yacht Club, we began to feel as if we were walking into a Stephen King novel. 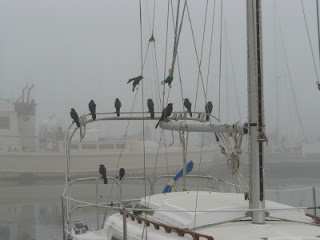 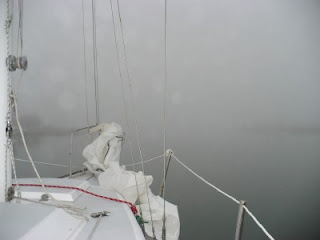 We talked to some of the other sailors on the dock for a bit and decided to try to get a sail in even if there wasn't a race. We set off from the slip into the fog.

It was really not so bad out there. The wind was practically non-existent but somehow, once we put up the sails... we began to move slowly but surely along. Bruce said we were moving less from wind and more out of habit. 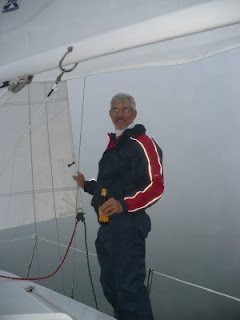 Before we knew it... we were moving along at 3 plus knots. At least for a while we were. 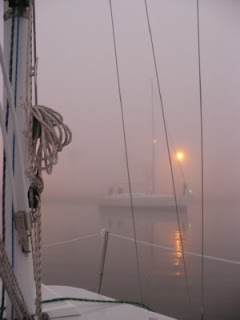 There were a total of three boats out tonight. We were the only boat that put up the sails. There was a race committee of sorts at the starting box. They gave us our course... to the gap and back. It's just less than a mile to the gap from the startline. We set out! I took my place at the bow to watch for obstructions. As I stood there the moisture clinging to the sail began to run down onto my clothes. My hair was becoming soggy.
Steve was insistent that we pass between the two markers of the gap. I spotted the flashing green first when we has less than a tenth of a mile to go. We tacked out and poked our nose out into the bay then tacked back in. Nobody was going to say we didn't stay the course... even if we were the only boat on it! We had quite a pleasant sail back to the finish line where we received a weak human horn finish. But a fun finish it was... through the fog! 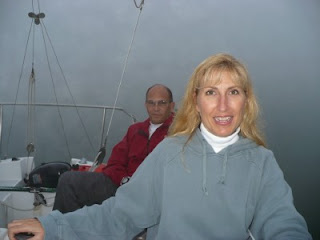 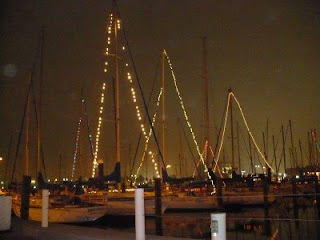 After we finished the "race" and put the boat up... we noticed that the light wind had blown away the fog. Our last view of the dock was a very nice reminder of the boat parade a couple of weeks ago. It was amazing how the fog was all gone. Had the race began just an hour later... we would have been all through... with the fog.