The Hostess with the Mostest

This year's office Christmas party went off without a hitch! Jana and I rock!!! We began planning back in July... we chose a caterer, booked a hall, booked the marguerita machine and the DJ. As the event grew near, we kicked it into high gear. We bought the limbo kit and the decorations. 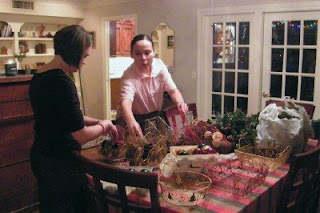 I had Jana and Lydia over on Thursday night before the party to prepare the center pieces. Who knew Lydia was so creative. She was the most talented of the three of us. I would pile stuff into the baskets and Lydia would make it beautiful! Jana did well on her own with a few touches from Lydia.
This year Jana and I swore our party would be different. The new regime is all about making employee morale soar. What better way to do that than with a few jello shots!?! 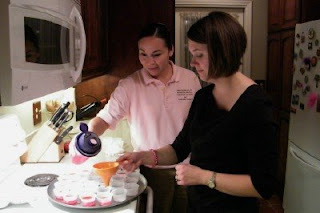 The day of the party began at 4:00 am for me. My eyes popped open and the mind began going over the endless lists. So I gave up and got up and loaded the car with all of the stuff and headed off to work. The day was mostly spent running all of the last minute errands. We had to pick up the beer and sodas, we bought $500 worth of Visa gift cards to use as door prizes. We bought the tequilla for the marguerita machine, we found hula hoops. The table cloths were the last on the early list to be picked up. We grabbed lunch and went to the Fireman's Association Hall on Ayers (yeah I know...) to put it all together.

Jana and Lydia abandoned me at 3:00 to go get ready. I picked up the giant cake at Janet's at 3:30 ... well I was there until 4:00 and late to meet the Marguerita guy at the hall... but he had found the tequilla and started without me so all was well. I left the hall and went home to get ready. 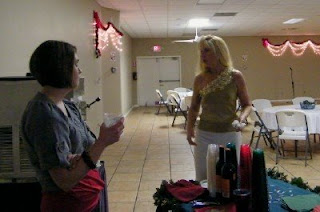 from some other event I can't even remember. It worked out. Jana was at the hall and had iced down the drinks by the time Bruce and I arrived at 6:30. The caterers had set up and were waiting for the guests. The only thing left to do was to make sure the Marguerita machine was working right. (the things we do for our employees!!!).

The Doctors arrived first... fashionably late at about 7:10. We began to mingle and as more people showed up, we opened the food line. We had the drinks pouring and the hall began to fill. Everyone found a niche and as the plates began to empty, Jana and I turned down the lights and made a little speech. Once that was out of the way... the fun began! It was a bit slow getting everyone up to dance at first. We decided it was time to bring out the Limbo Stick! Jana and I held the sticks for a while until the girls took over so that Jana and I could try it. Bruce got this picture of me right before I fell on my ass! 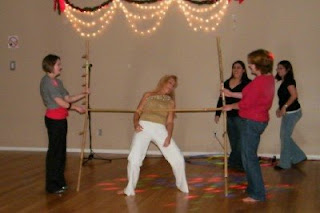 We had the best time doing the limbo! Those little girls are good at it! We gave out a door prize or two and threatened that they would be the last if nobody danced... that got people livened up a bit more... that or the jello shots we passed out...
Dr. Shelton's husband told me that if we didn't do YMCA soon, Laura wasn't going to be able to do it! So she took her place center stage and led the way. That got people really loosened up. Booties were... doing whatever booties do these days. 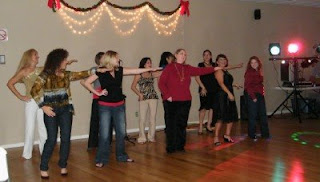 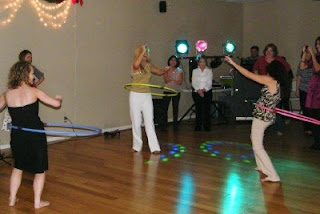 The next thing on our agenda was the hula hoop contest. Jana and I brought them out and had great participation... We even had a couple of our Dr.s out there hooping it up! We had a tournament first. Dr. Garcia got out there and wouldn't go! She just kept wobbling and wobbling... She outlasted everyone!
We had a hula race. First one across the floor 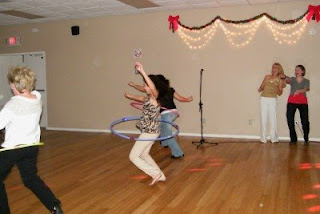 hulaing all the way wins. These people dashed across without even making one rotation! It was hysterical! We gave out door prizes to all of the winners. $50 gift cards do add a bit of Christmas cheer right here less than a week before the holiday.
We danced the night away. Every year, I try to learn the latin dances from our little girls... Dr. 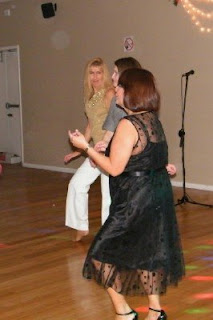 Garcia and I were out there bungling our way through it when she turned to me and held her hand up to her forehead to make an "L" and then two hands to make a "W". She shouted to me " Loser Whitegirls!!" Yes that's what we were! No rhythm, not enough bootie to make it work! Oh well, we tried!
The party drew to a close at 11:00 as Jana and I gave out the final door prize. The lights came up and people said their goodbyes and left with the centerpieces as an additional token. Jana, Bruce and I had some volunteer help and soon had all of the "Toys for Tots' loaded into her vehicle to be donated... all of the rest of the stuff cleaned up and loaded into our car to be stored for the next year.
Jana and I were proud that it had all gone well. We had kudos from the Physicians and many employees as well. Now maybe I'll be able to sleep past 4:00 am!