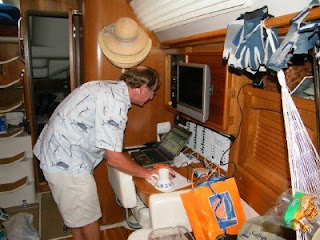 The morning of the Regatta dawned with near calm winds and skies heavy with rain-swollen clouds. The weather may have been holding it’s breath, but the dock was bustling with feverish activity. Everywhere I looked, people were preparing to cast off… 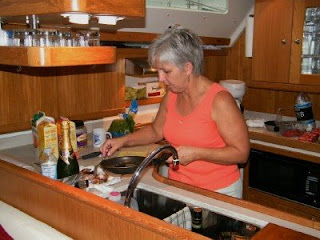 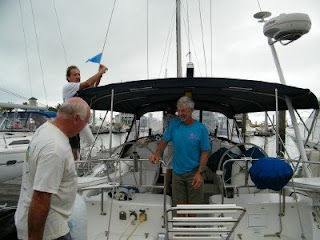 The men were getting serious. We said so long to out slip mates and turned our nose out towards the ICW once again. 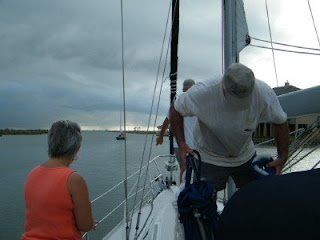 The forecast said 70% chance of rain and from the looks of it… we thought we would get it.

We motored out and joined the procession of sailboats in the Houston Ship Channel. As far as the eye could see before and behind us, there were sailboats. This is where we encountered the expected jetsam from Hurricane Ike. Brenda took the helm and the rest of the crew called for course correction left and right to guide her through the minefield of floating debris. It was everywhere…tossing in the waves. This was the most difficult part of the entire journey. Soon we broke free into the Gulf where we found no more sign of either the choppy seas or the hurricane soup. It was smooth sailing as we paralleled Galveston Island with increasing winds on our rear quarter. 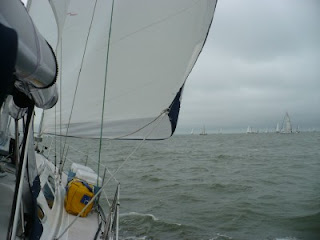 We cruised around the start line to get our bearings and strategize. We got glimpses of our fellow Corpus Christians doing the same. There were so many boats! Things heated up near start time and suddenly we were off. Our start was somewhat anticlimactic. Our fleet was spread out across the starting line. 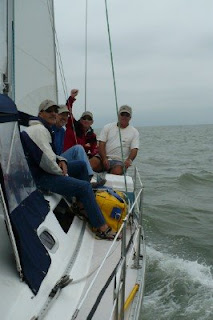 The guys went out on deck to check out the competition. Our plan was to sail outside the fleet about 4 miles offshore to take advantage of the favorable 2+ knot current and hopefully, a wind shift later in the race. We were all feeling optimistic as we gained slowly on the fleet. We rounded the Freeport mark in good position from what we could hear of the boats checking in with the race committee on the radio. Night fell and we began our watches. It’s always somewhat of a blur… sailing offshore at night. The hours pass quickly.

Morning came and we were very near the outer mark leading to the Corpus Christi Ship Channel. We began to see boats converging as we neared the mark. 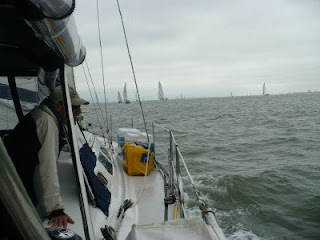 We heard them checking in and realized that, although we had seen good speeds all night, the strategy had failed. We had not seen the expected wind shift and it’s possible that the current was just as advantageous nearer the rum line. 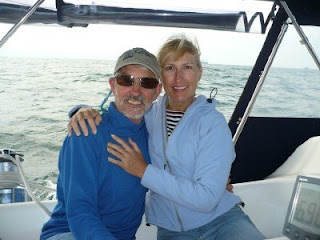 It was the 17th of October. Our birthday. 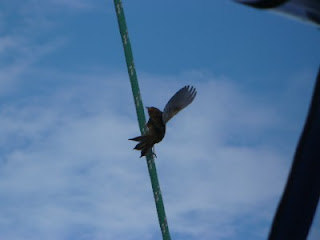 We had a little bird visit us for a bit. He hopped around on our rigging and then flew off to visit one of the many other boats. 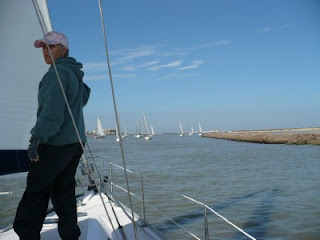 We entered the channel. It seemed that we were gaining on the fleet. It wasn’t long before we realized the reason. The tide was against us at two and a half knots and the winds were so light, it was impossible to continue to sail up the channel. 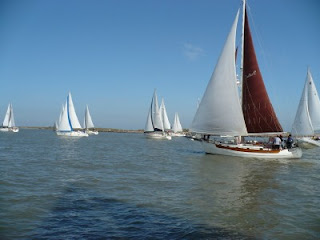 It was the most amazing thing. Boats tacked over to the north side of the channel as near the jetty as possible and tacked up for a run… then suddenly, they stopped dead…began to drift to the south and then fade backwards out towards the jetty entrance. Then they would start the process over again in endless succession. It was a merry-go-round of sailboats.

We continued to go round and round for the next three and a half hours. Many boats dropped out of the race. We were close but just couldn’t do it. We knew that the tide would slack and when it did… we would be there. We finished the race at about 1:30 p.m. It took twenty-three and a half hours in all. Even with the long finish, a pretty fast race. We dropped Doug off at the marina and sailed Sea Flight back to Corpus Christi. Bruce and I were ready to go home to bed. 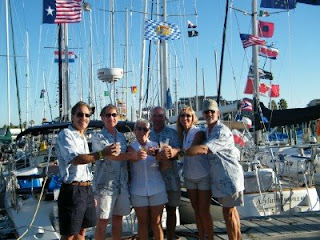 Saturday we recuperated. The big party was scheduled for 5:30 pm. We made it back out to Port A just in time to meet up with the crew. The boats all packed into the marina are always a sight to see. We had a great time walking the docks checking it all out. We talked to crewmembers from other boats. There was a BBQ dinner and unlimited rum drinks from the good people at Bacardi. 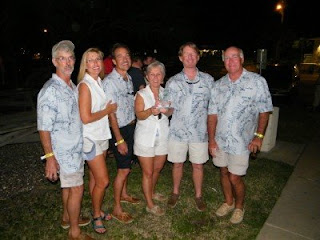 Our crew was thrilled when they called our name for Third Place in our class. It was an amazing race. Our strategy didn’t work. But it all came down to the finish. That’s sailboat racing!