We've retired from Cruising.  Our boat is for sale.  Might as well practice being boatless!  Yes, we've given up the freedom of going where we want, when we want on the water, and are testing our new role as tourists here on Puerto Rico!  We are doing our part to stimulate the local economy from within!

Joined by Cruiser friends, Burt and April, we made the drive to Ponce to catch a day-tripper to nearby Cardona Island!  Cardona is a tiny island off the coast of southern Puerto Rico near Ponce.  It isn't notable for being a "Cruising anchorage" because it has a steep shelf with very little space for anchoring, but it IS possible that it can be done for day use.


There seems to be only one tour boat offering transportation to the island, and they have several levels of service to offer.  Of course, being cheapskates, we chose the most basic level, and added the luxury of beach chairs and umbrellas!  The ride over to Cardona island took about 10 minutes! 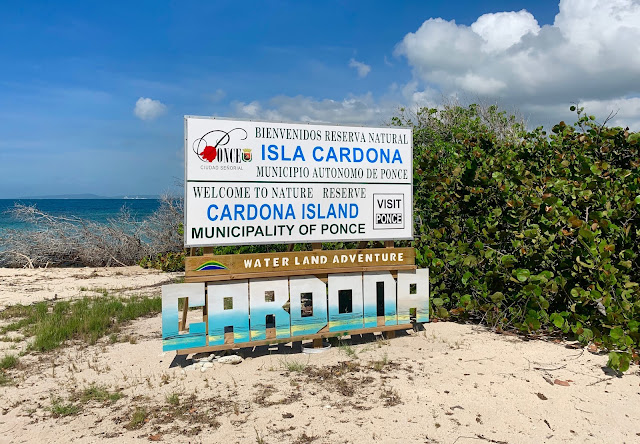 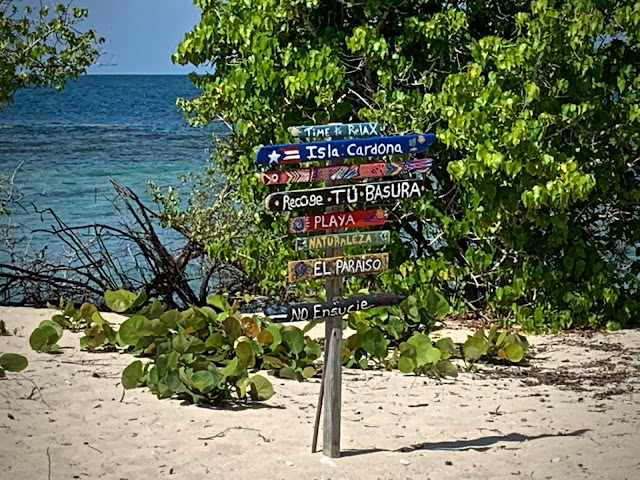 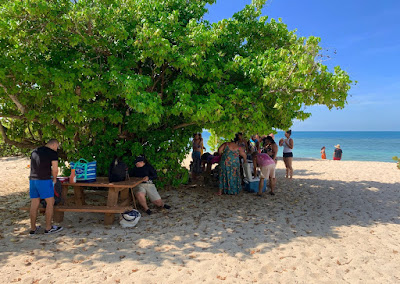 Most of the people on our trip did not splurge for the umbrellas, which left them huddling beneath one bunch of trees for shade and relief from the sun.  That tree bunch happened to be the dreaded Manchineel!  Luckily for them, it didn't rain! 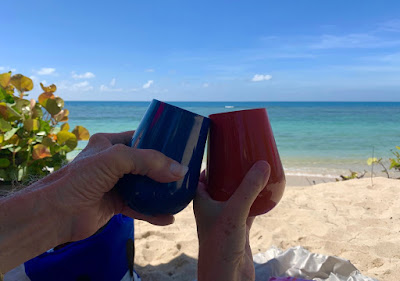 The Crew quickly set up our chairs and umbrellas in our chosen spot on the beach, and we moved in and began some serious relaxing!

Burt and April went off  to check out the reef while we enjoyed a nice, cold rum punch!  We're still celebrating having the boat's generator running again.  These weeks of waiting and bleeding cash, have left our nerves frazzled.  We've almost forgotten how to live, but we're quickly remembering! 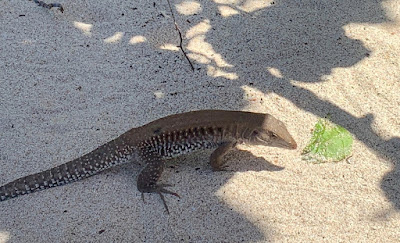 Suspicious scratching sounds emanating from the dried, fallen leaves of the sea grapes at our backs, brought our attention to the advancing army of Puerto Rican Ground Lizards that live on this tiny island.

We soon learned that these little guys were quite at home here and are used to entertaining visitors!  They crept up on us boldly, and proceeded to climb all over our bags, looking for whatever food they could find.

Whether or not it is a good idea, we picked the spinach out of our sandwiches and fed the little guys!  I think they liked the spinach well enough, but we later learned that they much preferred April's green grapes!  They skittered around our camp, even coming close enough to taste the saltwater droplets on my hip!  They tickled my toes, and two of them ran across Bruce's foot!  It was a little unsettling, but we couldn't see any teeth, so we quickly grew accustomed to their presence. 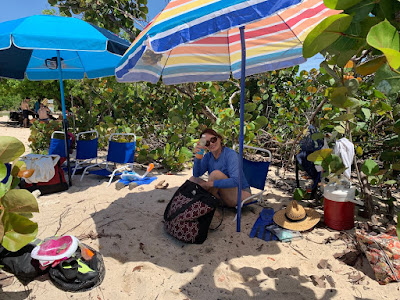 April and Burt came back from exploring the water and the island, so Bruce and I suited up and went out for a swim.

The group leader took the other people outside the reef, while we poked around inside.  We later learned from others, that we hadn't missed much, so we never went out there ourselves.  While this wasn't the best snorkelling we've ever had, it wasn't the worst, and it was fun gliding around, spying on the little fishes.  This area was reportedly damaged by hurricane Maria, but there are small signs that it will recover. 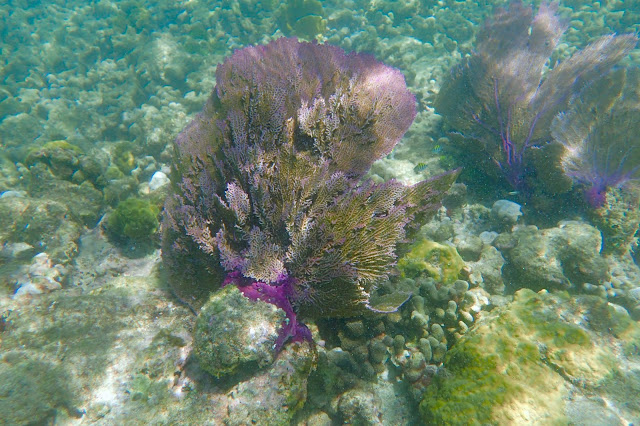 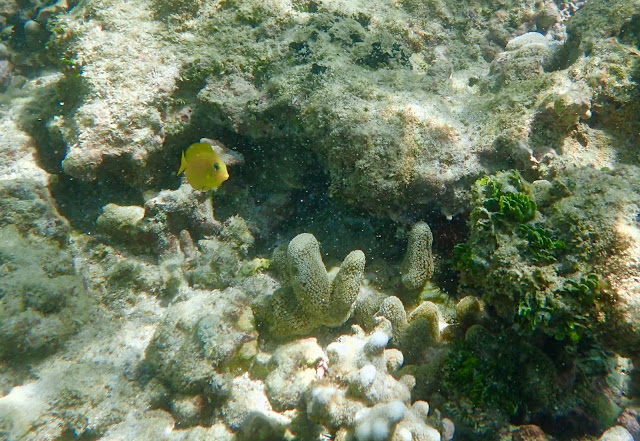 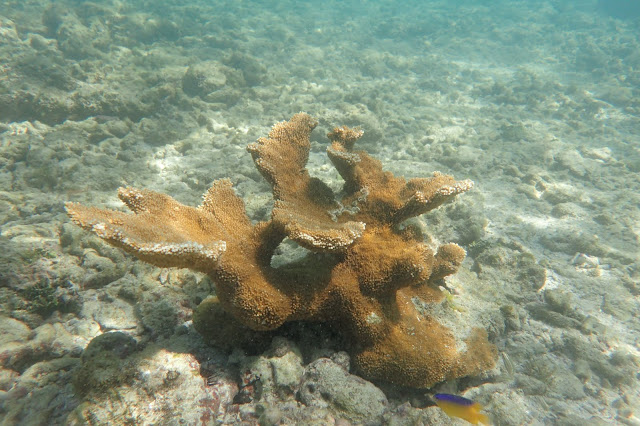 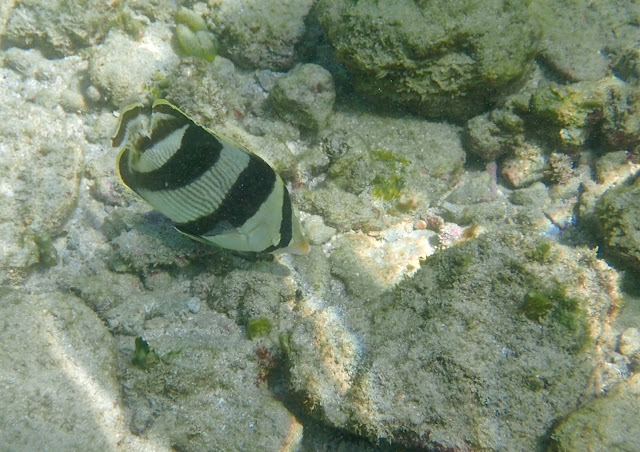 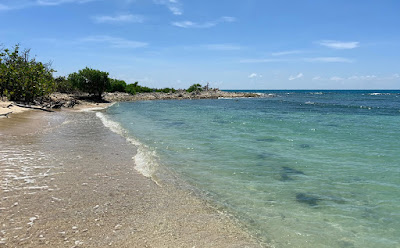 Bruce and I walked toward the eastern end of our little island, where a previous group of visitors had left some little treasures for us to see! 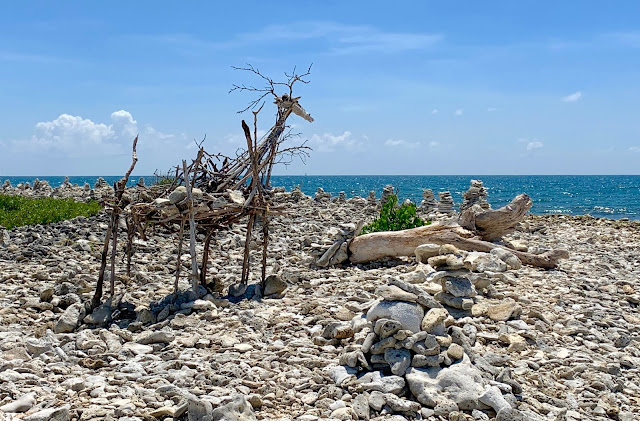 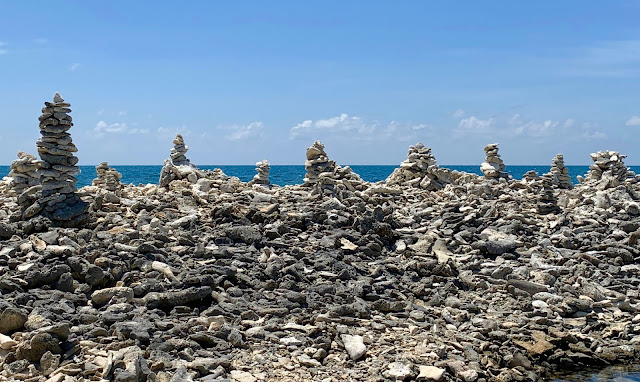 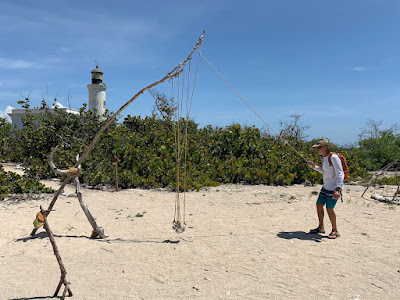 Wandering around amongst these little statues felt a little like exploring another planet!  We wondered WHY these former inhabitants built these structures... This odd thing seemed to be some kind of "toy". 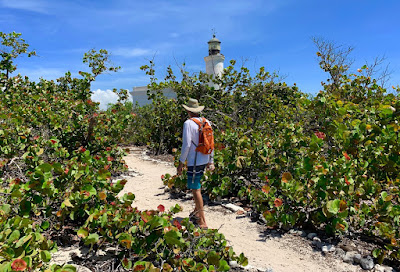 Cardona Island is the perfect little microcosm for igniting the explorer spirit, but without any chance of getting into trouble!  Well, at least I think it is!  We followed one of the neat little trails that wind through the sea grape scrub and found the cutest little lighthouse we ever did see! 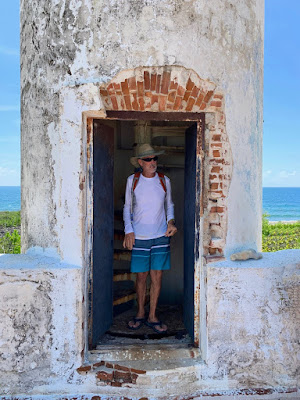 The tour director told us that it was OK to go up into the lighthouse. Remembering that Puerto Rico has a more relaxed sense of duty when it comes to keeping-us-from-doing-stupid-things-that-might-hurt-us... we made due with the landing on top of the structure, and didn't attempt to climb to the top of the tower.  Another guy did, and he told us that it was "tight" up there.  That's enough to kick off my claustrophobia...

The view from here was lovely.  This island is just the perfect size for a getaway! 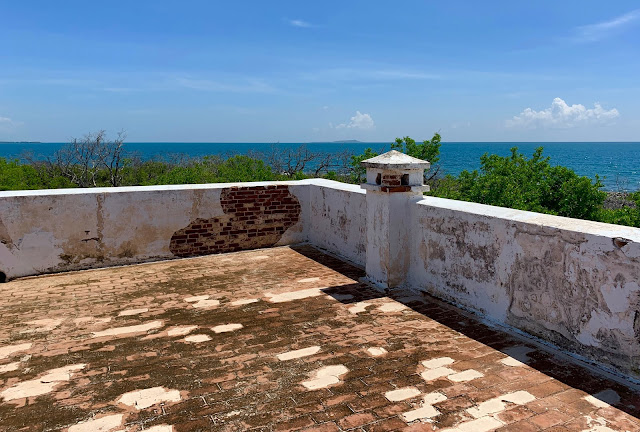 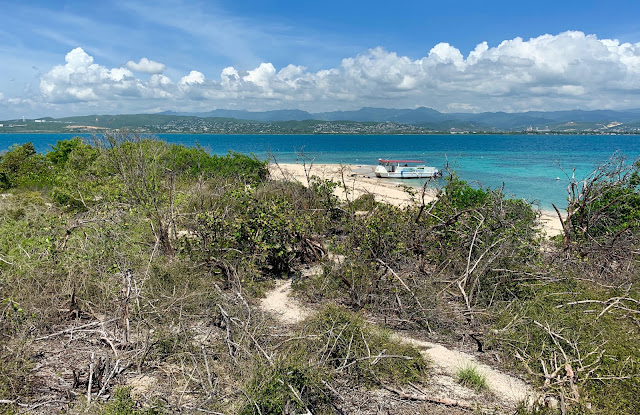 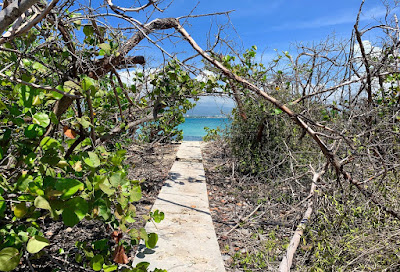 We left the lighthouse and continued our circumnavigation of the island.  One could spend days here poking about, looking for shells, snorkelling.  It did get rather hot as the day wore on.  We lounged beneath our sunbrella and listened to the waves roll in... We spent time time just hanging out in the cool water, chit-chatting.

As the hours passed, we realized that at some point, had we been on our own, we would have packed up and left.  Today, we were being "forced" to stop.  Relaxation was being inflicted upon us.  This was out of our control, so our compulsion to be "doing something constructive" was thwarted.  This kind of chillin' is just what I was hoping to achieve!


With two hours still to go, we began to search for entertainment.  In walks this huge iguana, as if on cue!

Normally we try to avoid feeding the wildlife, but here on this tiny tourist trap mecca, the lizards seem to expect it.  I'm sure they are used to a steady stream of visitors bearing gifts.  So, at least, we tried to give them something that would be good for them! 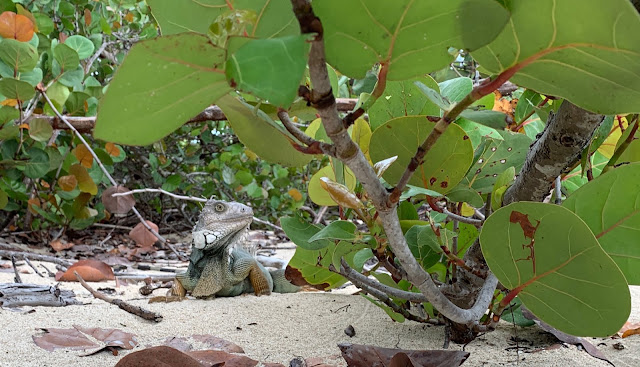 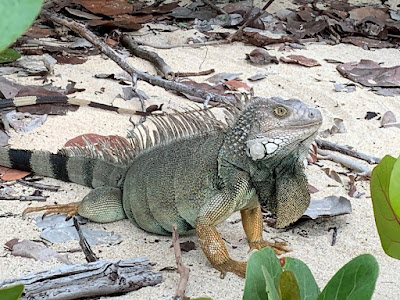 The Green Iguana is an invasive species here in Puerto Rico.  It's population exploded back in the 1970's when it was brought here by the pet trade.  They are mostly concentrated on the southeastern part of the Island and do a lot of damage to the fruit crops that are grown here.  There are people who hunt them and there is a budding market for their meat as food, although we aren't ready to try that yet...  Today, we will simply appreciate the beauty of this prehistoric-looking creature ~ up close, and personal.

And of special note, they also eat the   manzanita de la muerte (little apples of death) that all the other visitors here today are camped under! 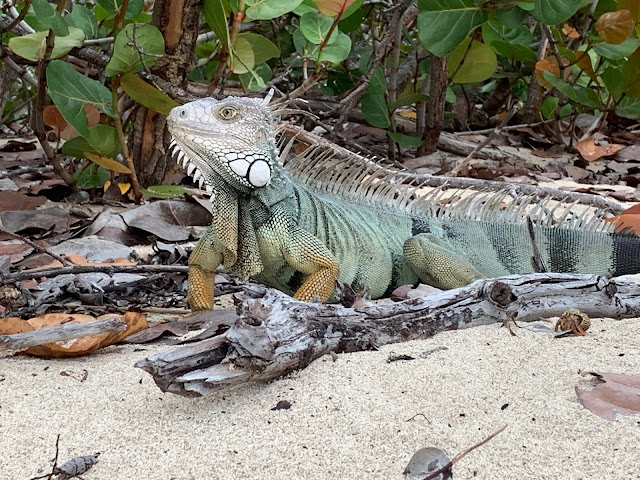 The Iguana ate the grapes, and then when we stopped feeding him, he followed us to our camp.  He took a position under the sea grape trees and watched us.  Bruce and I were sitting in our chairs and every time I looked back behind us, the iguana was a little bit closer!!!  Burt came back and fed him the remainder of the grapes! 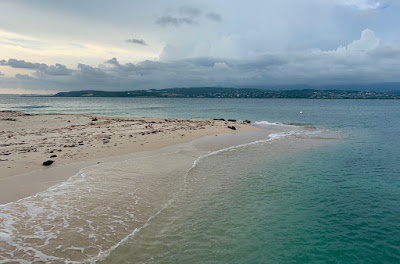 At just about the time that it was becoming unbearably hot, we heard distant thunder from the mountains.  A huge dark cloud spread a cloak across the island, cooling us off and providing a very pleasant ending to our day.  Suddenly, it was 4:30 and time to load up!  How decadent we felt as we packed our belongings and returned to the boat, leaving the sandy chairs and umbrellas to be packed onboard and washed by the staff, whom we tipped liberally!

What a fun day we had pretending to be boat-less!  I think it's going to be OK! 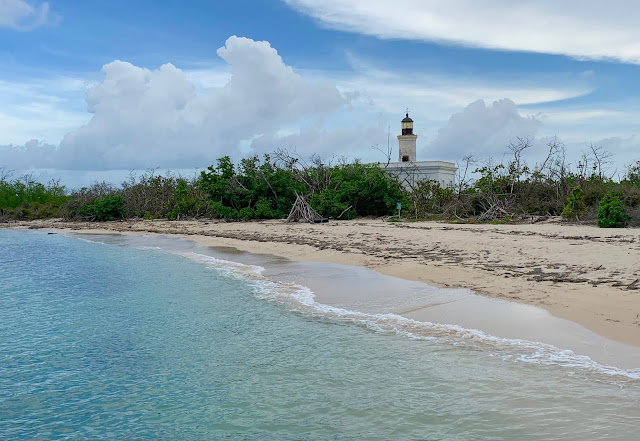