The River That Powers Coffee ~ Hacienda Buena Vista Part I

There are so many hidden gems here in Puerto Rico.  The history of the island is rich and fascinating.  Bruce and I have become AMIGOS of Para la Naturaleza, a group that promotes the preservation of, and education about the Island's history.  The group also promotes personal involvement by organizing tours and volunteer opportunities that foster a sense of ownership in the many historical sites they manage.


Hacienda Buena Vista is one of their first restoration achievements. The estate began back in 1833 as a farm that supplied produce to the market in Ponce and surrounding area sugar cane plantations.  Don Salvador de Vives immigrated here from Venezuela in June of 1821 with his wife and child.  He worked and saved, until he was able to buy the land cheaply due to its undeveloped and mountainous state.

The Manor House was built in 1845, the same year that Don Salvador died, leaving his son to take over the plantation.  Carlos Vives had the vision to complete the buildings that remain on the property today.  He also shifted production on the plantation from farming produce, to mainly providing milled cornmeal to feed the workers of the booming sugar cane plantations.  He did away with animal powered machinery by building a series of canals to harness the power of the River Cañas to power his mills.  His work on the new water-powered mill was all finally completed in 1851.  It is that canal system that we went to Hacienda Buena Vista to see today! 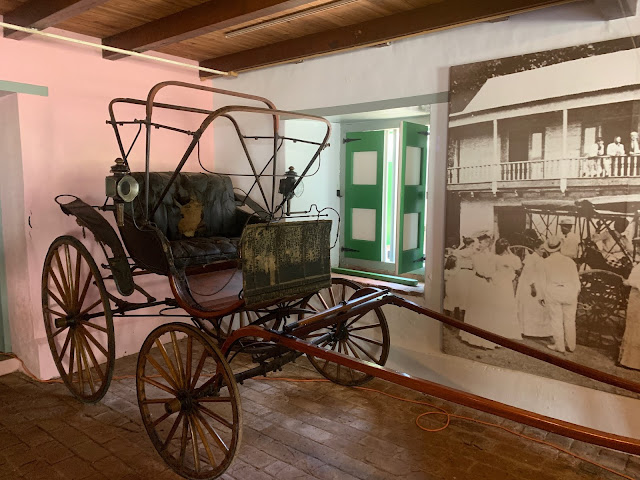 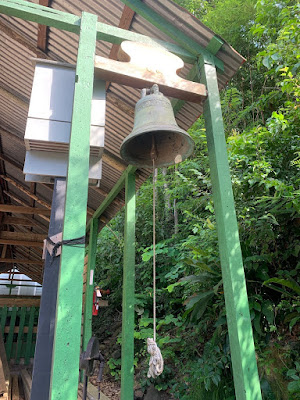 Today we are here for a tour of the Manor House and the series of canals that power the machines.  We arrived and had some time to wander about the courtyard, getting our first look at the beautifully restored buildings.  There are also many antique farm implements scattered around.

We chose some coffee to take home from the store, and talked to a local farmer who had set up his table in the old carriage house, and met our fellow tour-goers. 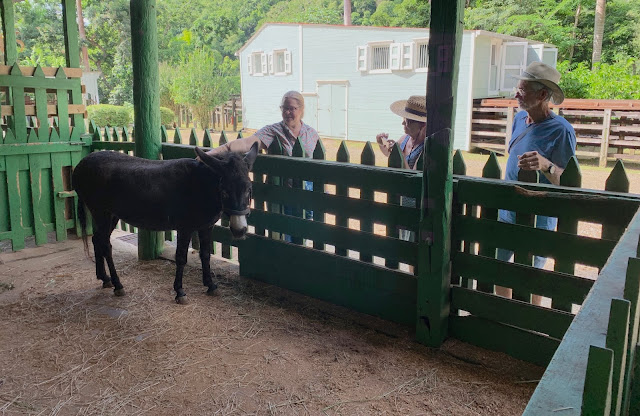 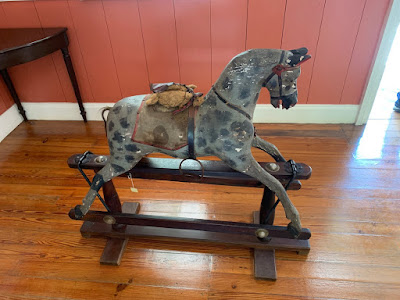 The tour began with a brief history of the property and an introduction to Para la Naturaleza.  The Hacienda was once a thriving plantation, providing corn meal to feed the enslaved people who worked the sugar industry.  Later on, it began to produce some of the finest coffee in the world, shipped mostly to Europe and the US.  By about 1900, after a series of hurricanes and the declining coffee market, production stopped, and the property was mostly abandoned to become a country house for the Vives heirs. 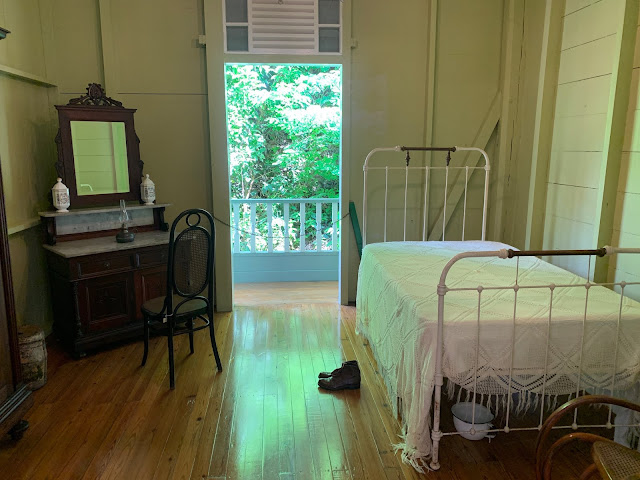 With the deterioration of the buildings, 86 acres of the original 500 owned by Vives were sold to the Conservation Trust in 1985.  The family was still around to provide information about how the property looked before falling to ruin, and they even donated many of the furnishings that are found in the house today.

The Conservation trust restored the buildings to be as close as possible to original, and today, we can tour the property and catch a fascinating glimpse into the past.  For me, it is amazing at how simply ingenious many of the items here are.  Yes, times were simple back then, but the people were so smart in finding better ways to do things that we still do today, but in a much more complicated way! 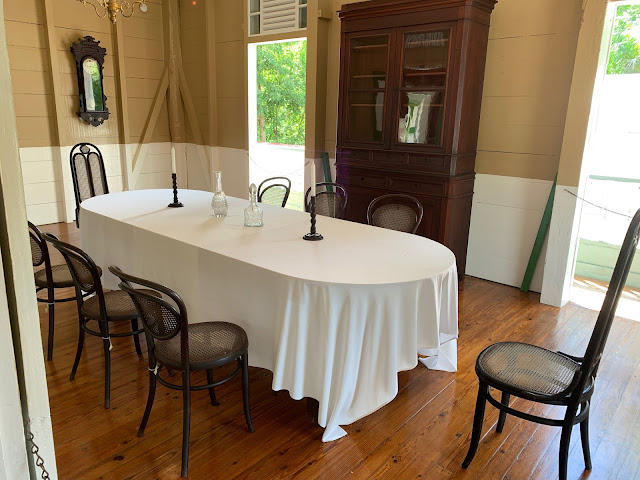 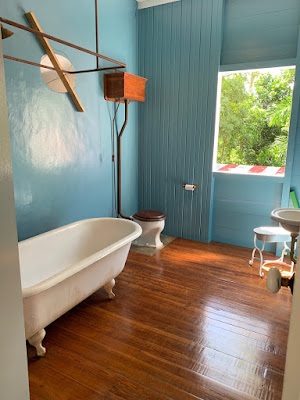 As we've seen in many of the old plantation homes we've visited, the family living areas are separated from the bathing quarters and kitchens.  Here an open courtyard provides a nice breeze to cool the different quarters.

Large windows and doorways provide ample circulation and the entire living quarters were nice and cool.  Even though it is the hottest time of year here in Puerto Rico, being at a slightly elevated level also attributes to the comfortable conditions.

This is one of those ingenious things that were once used to perform a task.  A carved sandstone basin sits atop this wooden structure.  Inside is a platform that holds a basin.  The stone is filled with water from the river.  The water seeps down through the porous stone and drips into the basin.  It takes about 8 hours, but if kept filled, it provides a supply of cool drinking water.  Funny fact:  The dipper has a jagged top that discourages putting one's lips on the dipper. Use a cup people!!!
We left the manor house and joined our guide in the courtyard below.  She pointed out to us that there is only one building on the property that is NOT made of wood!  It is unusual here in Puerto Rico, to see buildings made of wood.  For the most part, stone, block and cement are used to fortify buildings for the hurricanes that surely must come. But during our inspection of the manor house, it was pointed out to us that this entire estate was built without the use of nails.  They built these structures the old way, using the relationship between the shapes of the wood, gravity and structural design to allow the buildings to move with natural forces, but not to break.  The buildings have withstood many hurricanes and are still standing.  But the people weren't stupid... They have ONE hurricane shelter made of masonry!  The pink building in the yard was there, just in case! 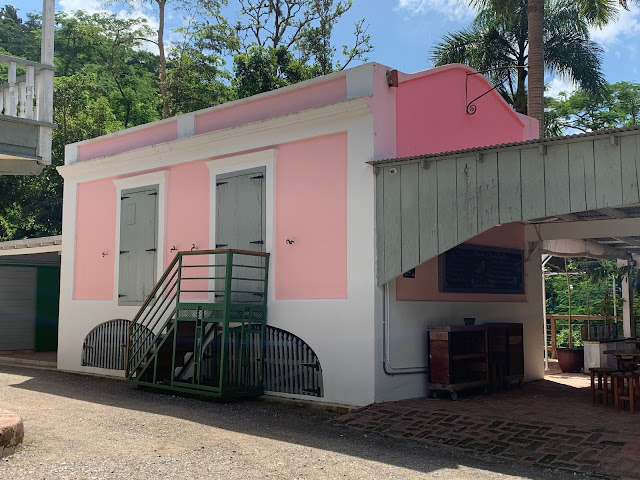 Next, our attention was focused on the canals, and the main part of our tour began as we followed our guide to the far end of the yard and beyond.  The canal runs right through the center of the yard, with a circular pool where the ducks can take a dip or a sip.  We entered the cool of the forest alongside the narrow, cement canal.


We stopped many times along the way to learn about life, the plants and trees, and the canal.  I am amazed at the use of natural forces to bring the water a distance of 2,600 feet from the top of Salto Vives, to the plantation yard where it is used to power the machinery, then on to where it is returned to the river, an altitude drop of more than 1,180 feet.

Salto Vives is a straight fall without pools, as opposed to a "cascada" which is a fall with pools formed along the way down.  The water is diverted from the top by the first of a series of guillotine-like manifolds that control where the water goes and at what flow rate.

Most of the canal is 18 inches deep by 12 inches wide, but there was one section that is wider and deeper.  Just above the buildings, the water comes rushing out from a tunnel and spills into the larger area where it slows down to a crawl.  This allows sediments to drop to the bottom of the canal before the water continues on into the buildings where it is used to power the machinery.  Steps lead into the canal to allow easy access for workers to clean the sediments a couple of times per month.  At the lower end of this pool, the water is once again forced through the smaller canal which increases the flow rate.  Brilliant! 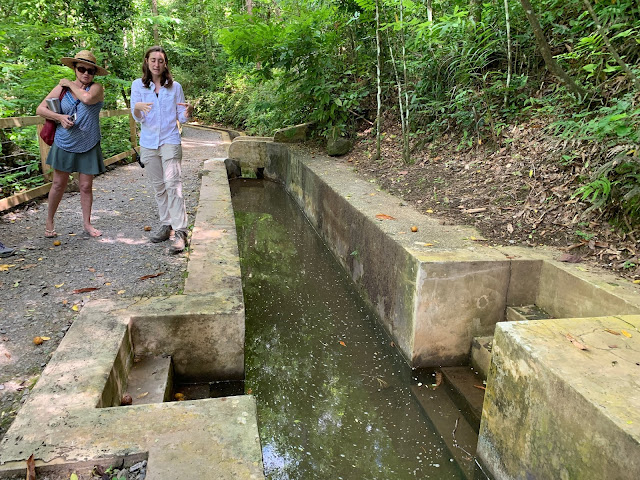 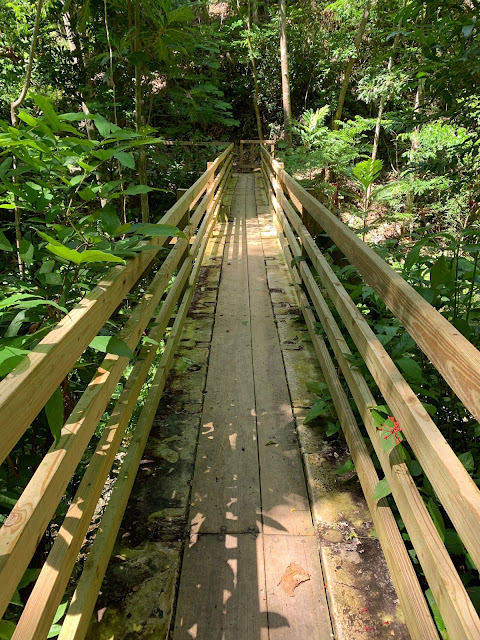 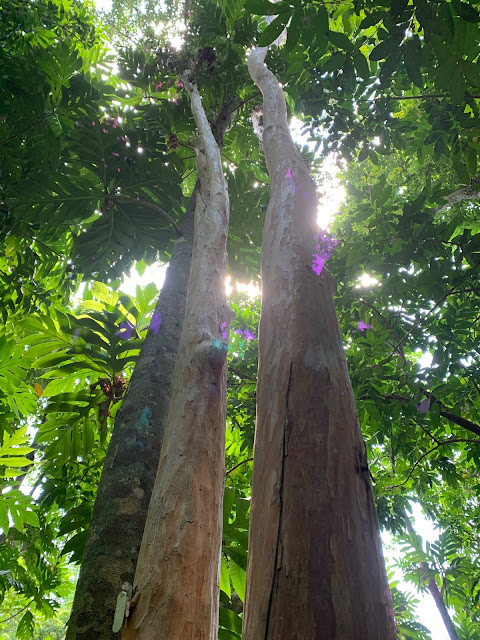 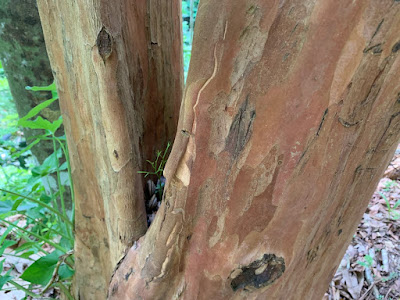 One stop along the way was to take a sniff of the leaves of this tree.  MarieLisa asked if anyone could identify the scent.  I recognised it as Eucalyptus.  I always was the teacher's pet!  But I can't take credit for it!  We learned about Eucalyptus back in Grenada, AND I use the essential oil in my insect repellant... which is one of the ways this tree was used back in days before modern sprays! 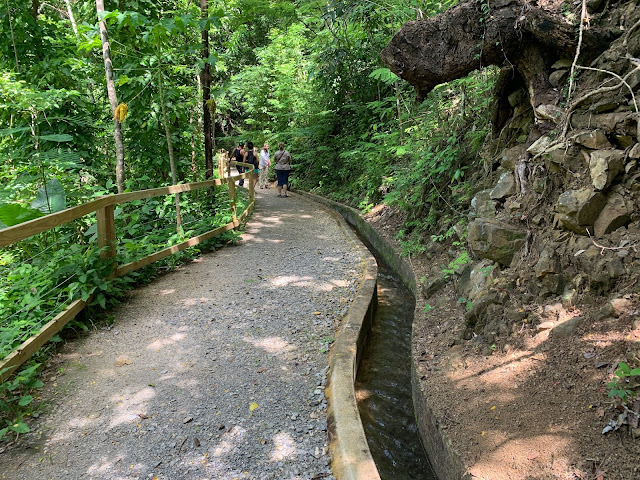 We reached an area where the canal runs through a tunnel.  Repeated landslides forced the builders to come up with a way to protect the canal.  They built a tunnel that runs about 100 ft along the path.  Because the foliage grows in through the porous materials, access ports had to be created so that people could go in and remove the mats of roots that would eventually clog the tunnels. Things grow fast here in the forest, so this cleaning must be done every six months or so.  Thick mats of roots are removed, allowing the water to continue on through unfettered. 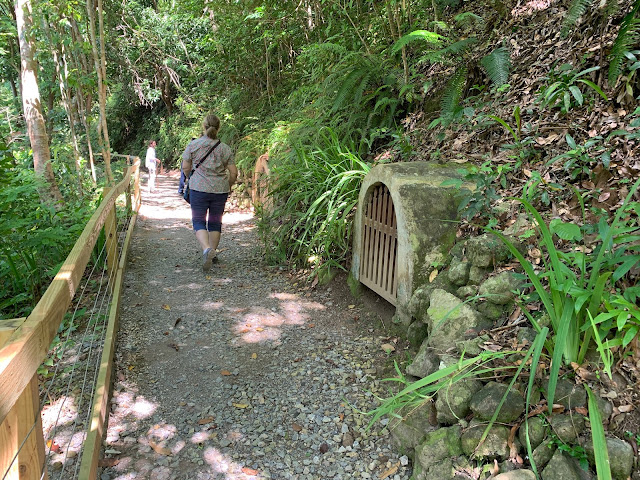 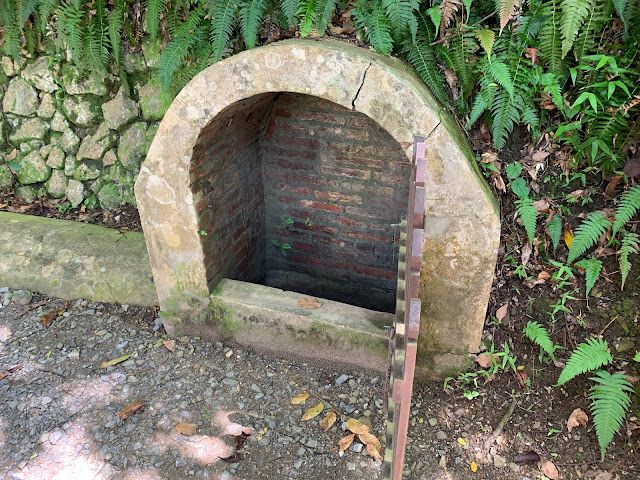 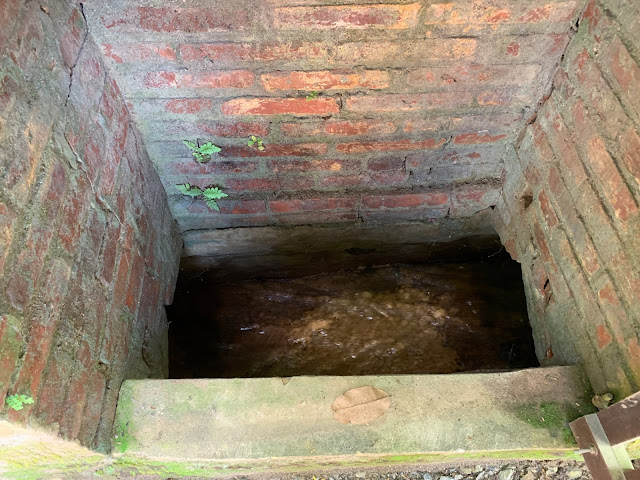 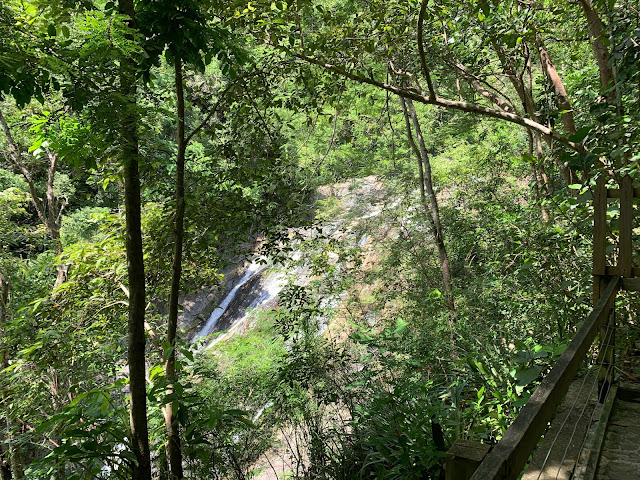 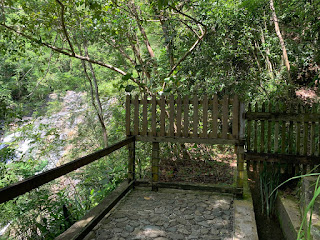 Finally we reach the end of the trail, but are not allowed to continue on to the falls.  No amount of begging made any difference, we weren't allowed to see where the water was diverted!  It began to feel like the tour was over... then I asked "Where does the water go after it leaves the mills?"

And with that, we retraced our steps to find the answer!  The water taken from the river has been allowed by the governing authorities, but it comes with stipulations.  First, it must be returned to the river, and second, that it must be returned CLEAN!  Outside of what is consumed by the people and animals here at the Hacienda, all of the water that is used to power the machines is returned back to the river below the property.  This brings us back to that mill house we passed on the way up! 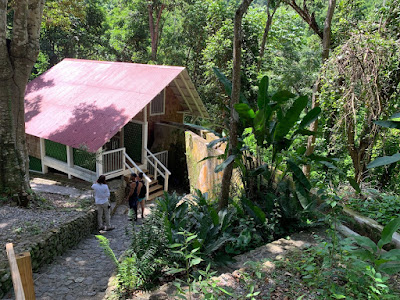 We passed through the now-familiar courtyard, and continued on to the corn milling structure.  Here the water enters from the top of a 45 ft long pipe, which uses gravity to increase the water pressure as it exits the pipe far below. This jet of water enters a mechanism that spews the water out where it hits a wall, causing a force that turns the gears.  Simple, yet ingenious!  Of further note:  This is the only know example of the Barker Hydrolic Turbine in existence.

These old machines were once commonly used, but during wartime, they were melted down for use as ammunition.  There is an unconfirmed story going around that when this machine was originally purchased, the taxes were never paid... and therefore, it was possible to secret its existence from governmental authorities, thus saving it for us to enjoy and marvel.

MarieLisa showed us how the corn was milled into meal using a smaller, in-home version first, then they opened up the waterway and put the machinery into motion.  It was amazing to see these huge machine parts come to life and work together to grind the corn.  There is even a mirror set so that you can see where the water shoots out of the mechanism far below. 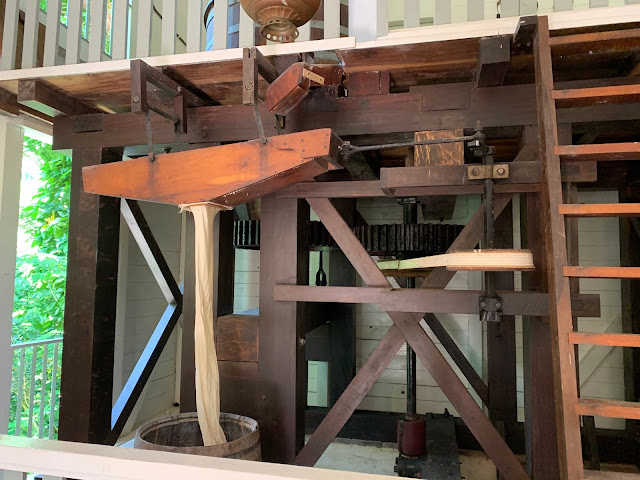 Of course, these wooden parts are re-creations because the original pieces were much deteriorated.  But the metal parts are all original!  The island university engineering students were called upon to restore this piece of history when it was found.  What an amazing, hands-on opportunity for the students! 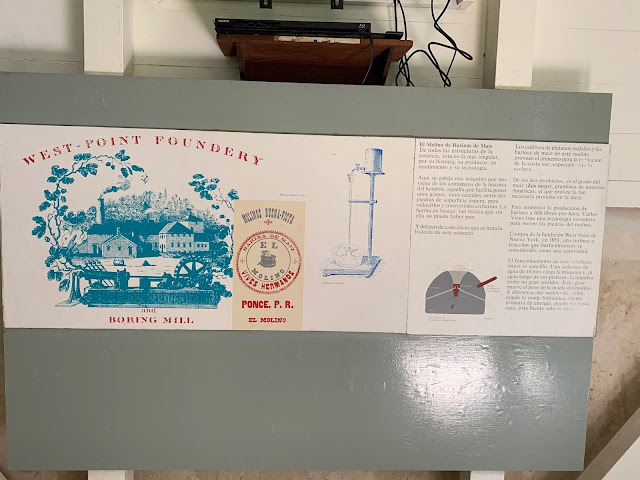 Leaving this mill house, we walked the few remaining steps to see where the water passes through its final phase before being liberated back into the river.  One more cleaning process is applied by way of a drop through rocky protrusions that give it a quick "scrub".  Sediments are left in a small round pool, then the water goes on its way back to nature.

This was originally the entrance to the property, before the road we came in on was built.  It crosses over the River Cañas and through the quiet forest.  Maybe some day we will explore that route!

This concludes the first part of our tour of the beautiful Hacienda Buena Vista.  Next week we will return for a more in-depth look at how coffee was grown and processed here.  Stay tuned!