I have to admit that since we let Jezabelle go, I MAY be on a mission to fill my time, and my head... with anything that keeps me from missing her.  We've been going almost non-stop, with only enough rest time to keep Bruce from keeling over on me!!!  Today's Head Trip was to the Nature Reserve at Las Cabezas!  (see what I did there?  Cabezas = Head)

We picked up our Cruiser friends, Burt and April, about a half hour early, but they were ready.  I still have this compulsion to be on time for appointments, although I realize more every day, that time is a little different here... So to absorb a little of the excess, I took the scenic route and found myself driving along a narrow, country road in the vicinity of a place I had marked for future exploration on my Google Map.  With a car-load full of "Doubting Thomases" I took our trusty Honda off road in the direction of the little river that divides Fajardo and Ceiba, until I feared I might get stuck and my crew would refuse to help me dig us out! 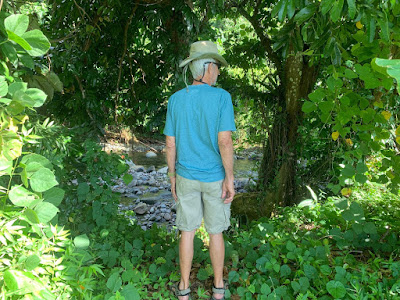 We continued the walk to the river along an overgrown path, but the sound of rushing water reassured me that we were going the right direction.  Suddenly, there it was!

The little stream babbled over a rocky bed, but there was a steep bank and we didn't want to get dirty... This was just a look-see mission on our way to Kayaking! 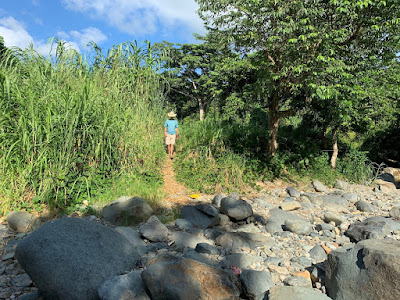 We backtracked and found a better spot further downstream where the river made a sharp bend.  This would be a great place to set up a day camp!  The river cut a steep embankment on the far side, complete with a little cave!  The near side of the river was a gently sloping bed of rocks of all sizes!  Just downstream was a lovely, deep pool, one of several Charco's Frio, where the water was slow-moving and clear. 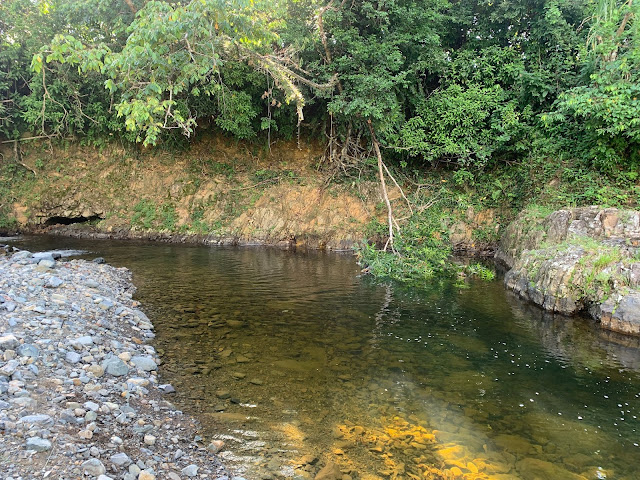 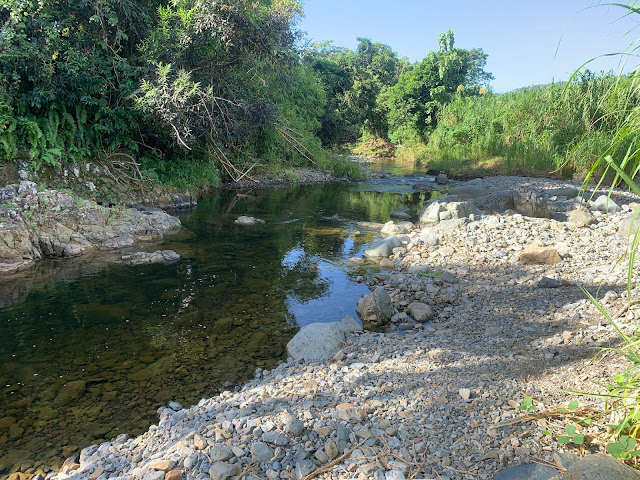 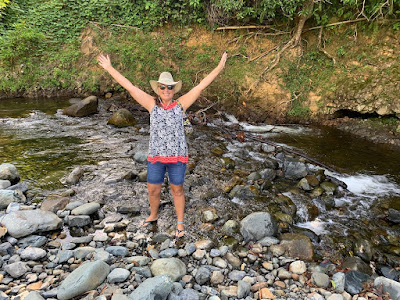 My notes say that there is a waterfall further upstream called Las Tinajas, but that adventure, we will leave for another day!  Our 30 extra minutes was ticking away so we filed this little spot away for the future!

We enjoyed the rest of the drive that wound down the mountains and through the little town of Fajardo, ending at the north -asternmost tip of the island. 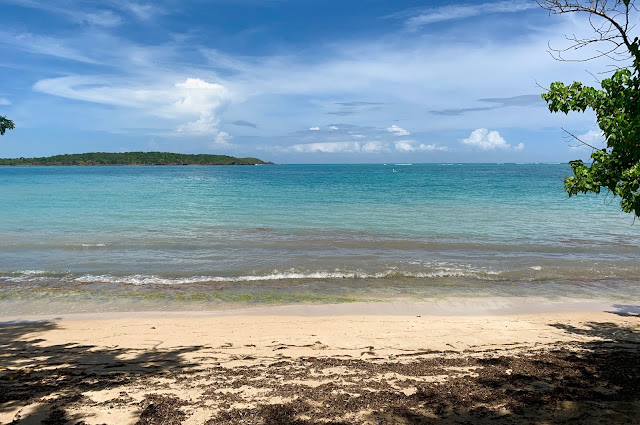 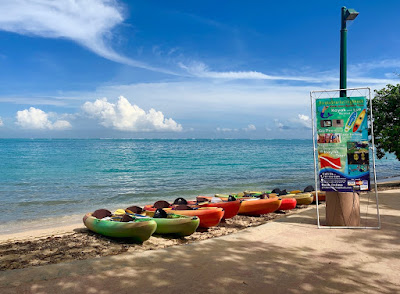 Bahia Las Cabezas was the stunning blue that we don't have on our side of the island.  Our eyes drank in the beauty for a few moments, then we got busy suiting up after a quick checking process with the very friendly young people of Pirate Snorkelling Shack.  We had reservations for two tandem kayaks for two hours!  Time to get crackin'! 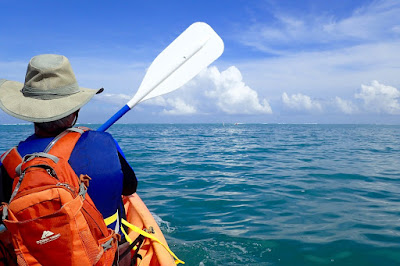 After a quick orientation, we were turned loose to paddle to our heart's content on the serene waters of Las Cabezas.  This area is also a Nature Preserve, but the land portion remains closed after Hurricane Maria.

The beach and waterways are, of course, open to the public.  We learned that we can come back here any time and kayak or swim/snorkel here free of charge!  But, even though we live here, it's nice to support the local businesses now and then.

We paddled toward the protective reef that keeps the waters so calm here in the bay, every so often stopping to peer into the water to see what the bottom looked like.  There were vast grassy beds with a few open sandy spots and some rocky reef areas.  The map given to us by the Pirates showed several reef areas in the center of the bay, then all along the perimeter.  We could see the big waves building and crashing on the reef making us very thankful for their protection!

The snorkelling wasn't enticing us enough to convince us to get in, so we continued on paddling, enjoying the exercise, the light breeze and the warm sunshine as our kayak rose and fell with the gentle swell.  Ahhh what a life!  This was perfection! 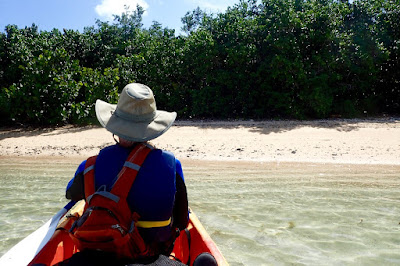 We headed for the more protected area deeper into the bay, and found a secluded spot on the sand to beach our boats.  The boys went off snorkelling while us girls explored the beach, looking for shells.  We felt so far away from civilization in those moments, we could easily have been on some deserted island in the Caribbean with no name, and not minutes from the busy city of San Juan! 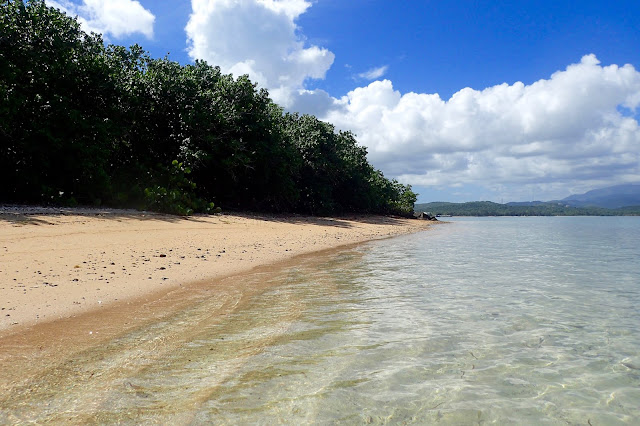 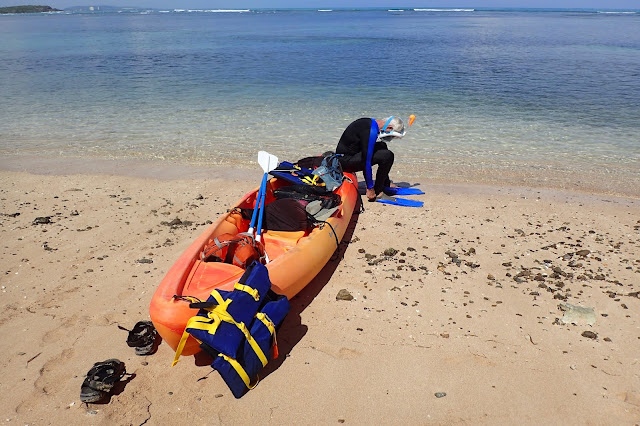 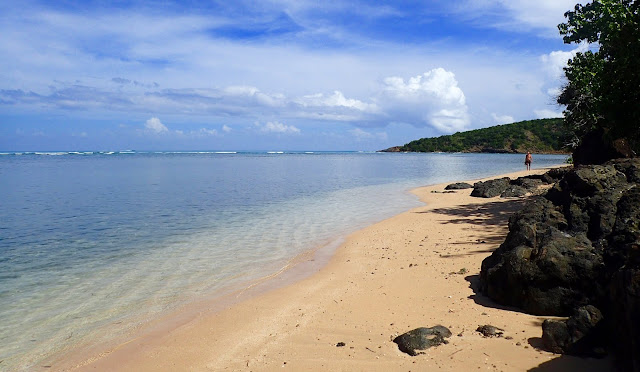 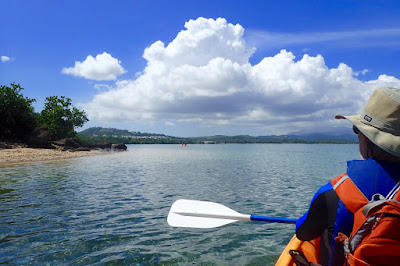 We could have lingered there all afternoon if we had brought a lunch... and if we weren't on the clock to return the kayaks!  Fully refreshed, we took off paddling until our puny arms prompted us to head for base! 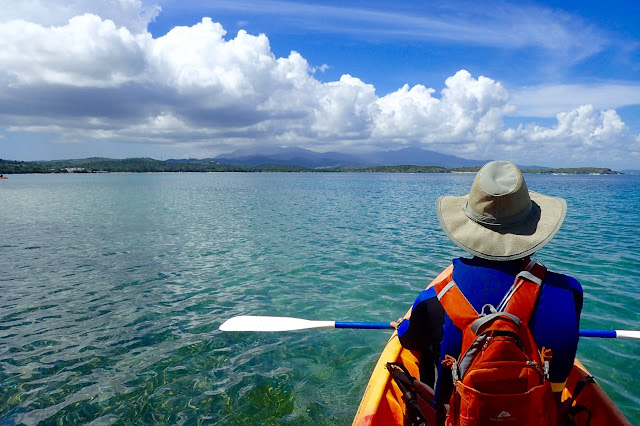 As we approached the beach, the young man who checked out our gear met us to pull our kayak back up onto the beach.  He offered us a cold water, which we eagerly accepted, and checked our gear back in.  They also surprised us by offering us a ticket that would get the four of us entry to the shower facilities at the nearby Seven Seas Beach.  What a treat that we didn't have to drive home all salty and sandy! 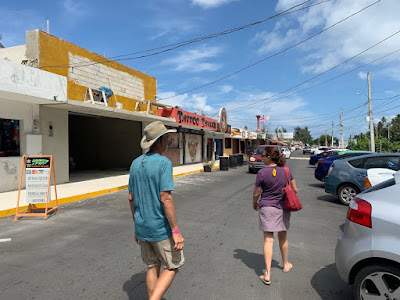 Since we were clean, we stopped at the Luquillo Kioskos for a meal, choosing Cuchilandia Cornis for no real reason other than the workers there welcomed us warmly.  We had delicious fried grouper and lemonade, then headed for home with full tummies and hearts!  We love this island more every day!  Las Cabezas just made it to the short list of favourite spots!