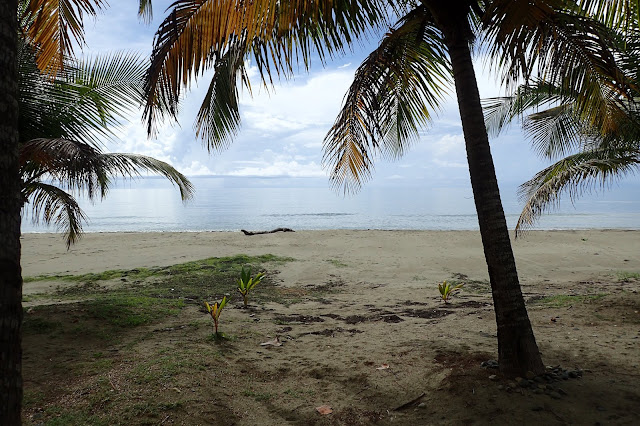 It's difficult to conceptualize that while the weather here is so perfect, there are places back in the US with snow on the ground right now.

This perfect weather seems like even more of a gift when you compare it to the past week, during which we lived through our second "hurricane scare" of the season with tropical storm Karen.  This bay.  This beach. This sky was angry and violent mere days ago.  But today... the word "placid" comes to mind.

How can we, in good conscience, spend this day indoors???  Time to take full advantage of the fact that we literally have... a beach in our back yard! 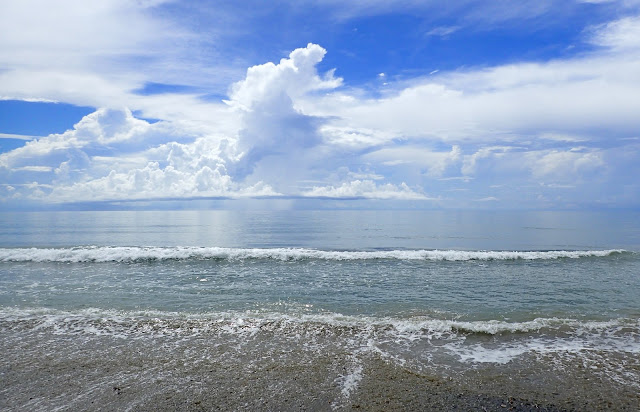 We've carried an old inflatable kayak around on the boat since 2016.  From Puerto Rico, down through the islands of the Caribbean, fourteen months in the bays of Grenada and back here to Puerto Rico... In all of that time, we've used this kayak maybe five times!  All of the trouble it takes to inflate it, and then having to use our limited amount of fresh water on the boat to rinse the sand and salt water off of it in order to store it down below, made us reluctant to us it.  Now, we've got no excuse! 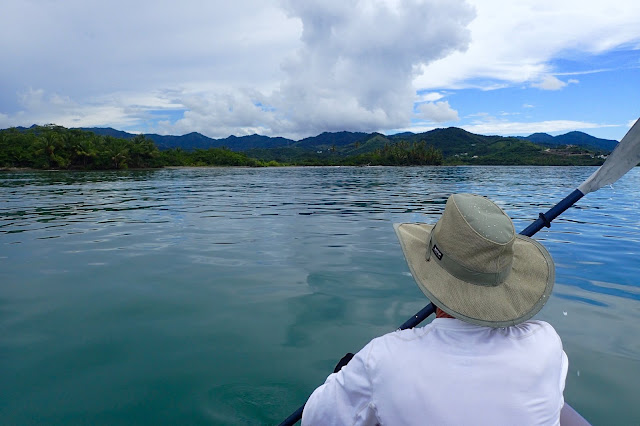 Today was sort of a trial run.  We didn't really prepare very well!  We took off with no drinking water, so we couldn't stay out too long. But we paddled easily down to the mouth of the Rio Grande de Patillas at the far east end of our beach.  Since we expeditioned down there some months ago, we've thought it would be fun to take the kayak back up the river to explore... Today we just hovered around the mouth, watching how the waves set up, picking the spot where the water was deeper.  Basically, we scoped it out for next time when we return with water!

Paddling around out there was so cool!  The water was glassy.  Fish jumped around us with a loud plop.  The whole world was quiet and the dramatic clouds reflected on the water's surface, blurring the line between sky and water.  It even confused the camera in a lot of the shots I took! 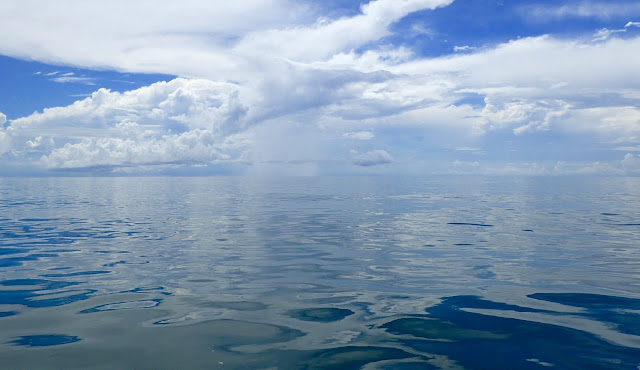 As we neared our beach, pointing the bow toward the tallest palm tree on the beach, we came upon a string of floats that marked a fisherman's net.  We diverted to go around it and saw that it led to the shore.  We could see the fishermen sitting in the shade of the palms, waiting for the fish to wander into the enclosure they set. 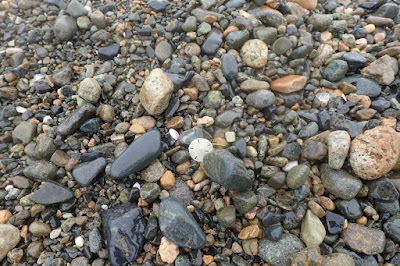 We approached the beach just down from the nets and I began to watch the swells as they set onto the beach.  It seemed like there were a few larger swells, then a period of very small ones.  That's when we want to try to land our kayak.  We line up, waiting for the smaller swells, then paddled furiously as the stern lifted... Perfect landing!  We dragged the kayak and left it on the beach while we split up and combed the beach for sea glass and sand dollars.

I stopped to talk to the fishermen and learned that they had been waiting since 7am when they set out the nets.  They do this often, and sometimes they get lots of fish, others not so many.  Today, we got to watch them pull in the nets. 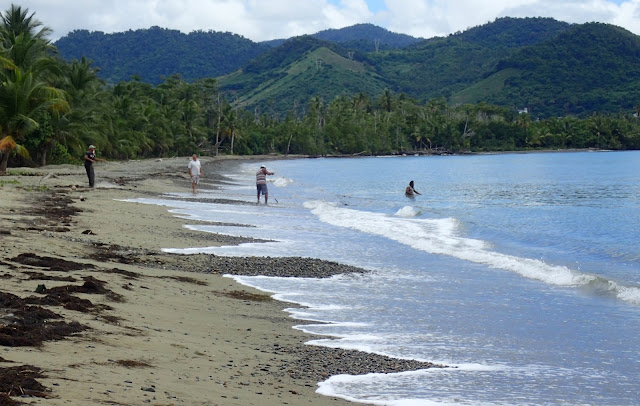 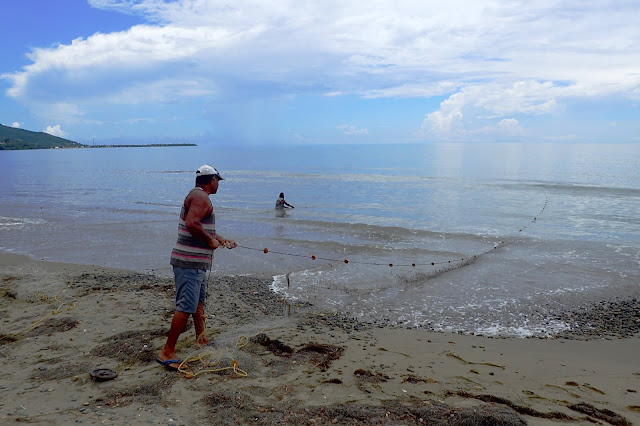 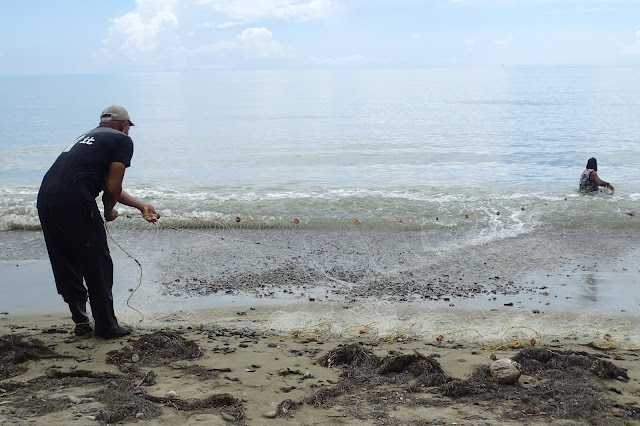 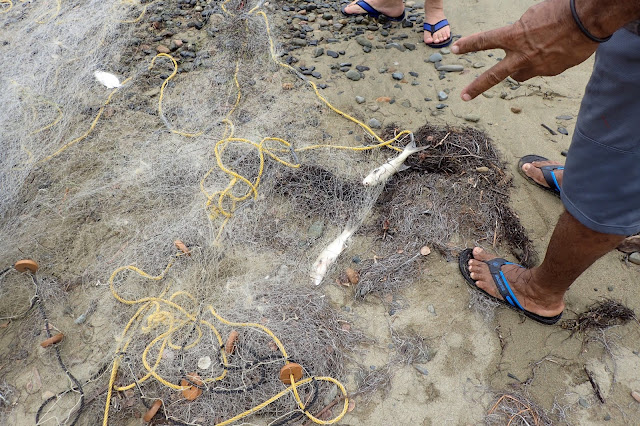 Imagine my surprise when I turned around and saw this man put a small Pompano into his mouth while he freed the other fish from the net.  The fish flopped up and down, almost smacking him in the forehead!  He saw my face, and posed for a photo! 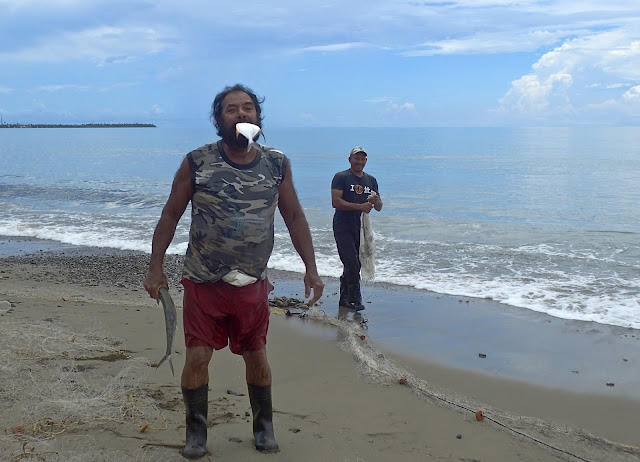 Seeing these fishermen bringing in their nets, reminded me of so many others we had seen throughout our travels in the Caribbean.  I experienced one of those moments when I just can't believe that we actually live here.  On an island.  In the freakin' Caribbean!!!  My heart swelled with love for this island, and for the fact that while we are no longer cruising, we still get to live like we are! 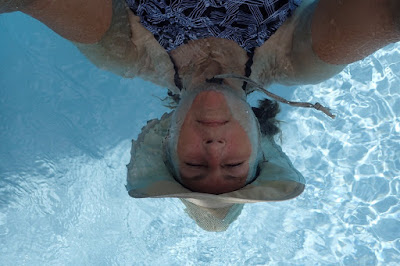 But with added perks... like a sparkling blue swimming pool to cool off in when we get hot and sweaty playing in the sea! 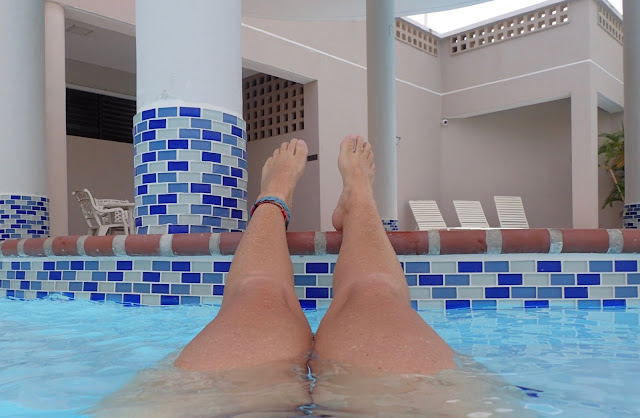 After floating around for a while, we cleaned our kayak off in the courtyard and counted up our treasures!

We've lived here for about 8 months now, and sometimes we still can't believe it.  When I see Facebook posts of cars covered in three inches of snow, trees dusted white and people wearing jackets and coats, it just makes no sense!  Here we are where it's never winter, with a BEACH, in our back yard!