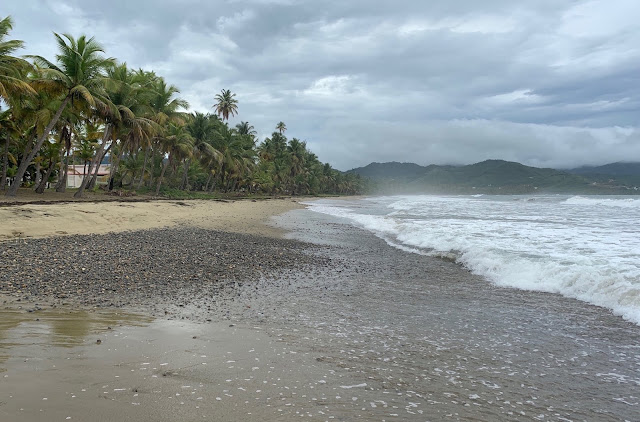 Each Beachwalk is unique...
We may walk this beach a thousand times...
But no two will be the same!

The height of the 2019 Hurricane Season is upon us.  Previously spared by Hurricane Dorian,  we were left nervous, but grateful that a direction change overnight meant the difference between something... and nothing happening to us, or our boat.  Then as the days unfolded, we got to do it all over again with Karen.  She increased to Hurricane strength in the Caribbean Sea just south of us, but by some miracle, was downgraded back to Tropical Storm status just before reaching our shores.  We did almost nothing but watch for every update from the National Weather Service as they were published...  The boat was already storm prepped (we just left her stripped after Dorian), so we were free to worry without interruption.


Growing up in Corpus Christi, TX., I was well aware that the beach is no place to be when there's a storm approaching.  But we just could not resist.  We got up early in the morning with Karen forecast to affect our shores by 2pm... and went to the beach!

Our first visit to the beach in the morning was a comfort to us.  Perhaps falsely so, but we took our cue from the bugs!  They seemed completely unconcerned.  The waves were up, crashing and slashing against our shores, ripping the sand off to leave the rocks exposed.  I feared that our beach would erode away the sand causing our palm trees to fall.  It seemed like the water was further out than normal, like it was being sucked out to see by TS Karen!

But at this early hour, the winds were slight, the skies heavy and the island seemed to be holding her breath... waiting... 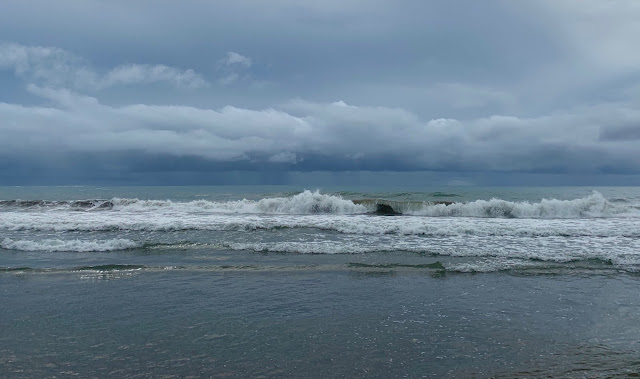 We came back out at mid-day and saw signs of higher water reaching up onto the beach.  Amazingly, there was a lot MORE sand washed ashore.  We couldn't see the rocks anymore!  The storm had strengthened slightly, but it looked more like it would go east of us, instead of a direct hit like yesterday's forecast showed.

Burt (Our Cruiser friend staying at the eastern end of the bay) reported that the waves over there were about 5 inches!  He kept us updated about the conditions at that end of the bay, and told us that the boats were riding gently.  RELIEF!

Our concern was that when the storm passed and the winds backed around to the west and southwest, the waves would come into our bay through the break in the reef.  All the forecasts that showed this, also showed that the waves would continue to come from the east and southeast, with very light west-component winds.  We wanted to trust the forecast, but it seemed too good to be true!  We continued to watch, and wait throughout the day...


The storm went east of us, but barely! One more beachwalk revealed the water MUCH higher on our beach.  Massive amounts of new sand had appeared to build up the beach, but the waves were still washing up and running off in rivers.  It was simply amazing to see!

We never got ANY wind.  We got only minimal rain.  We got so lucky!  This late in the month of September, we are hoping that we won't have any more storm scares here in Puerto Rico, but we're afraid of jinxing ourselves by saying it out loud!

It's nerve wracking, watching the reports as they roll off the presses.  As night fell, we felt like we could afford a sigh of relief.  We would still feel the effects of the storm tomorrow possibly, as the rain bands continue to trail after Karen as she makes her way out into the Atlantic. 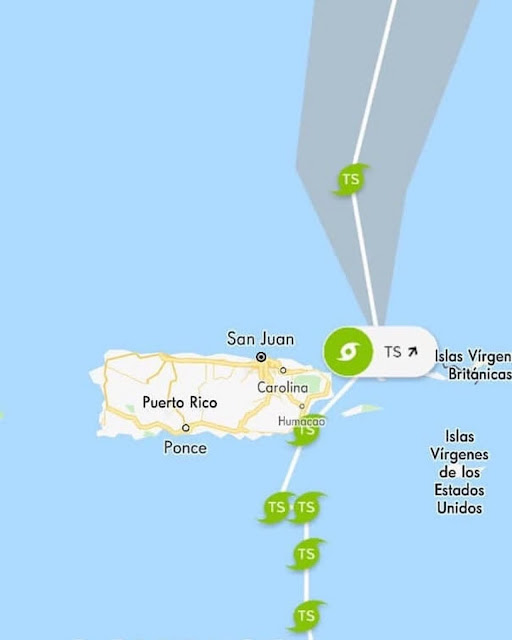 After Karen passed, we saw this amazing graphic of her path.  You can see that as she tracked toward our east coast, she took a little dog-leg and for a while, we were directly in her path!  Then miraculously, she just curved off to brush the east coast in the exact spot where Hurricane Maria hit in 2017!!!  But...the good news is, that she was ONLY a Tropical Storm when she came our way.  Mother nature has a wry sense of humour, this I can say for certain!