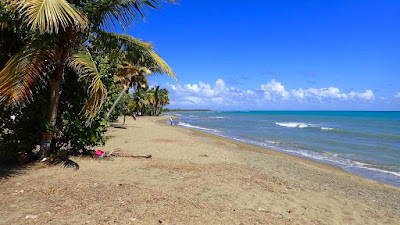 I guess any waterside community has access to fresh fish.  We've enjoyed the fresh fish available in Grenada the many months we lived there.  Eager to find a source for fish straight from the fisherman, we did some asking around.  Cangrejo Beach in our little home town of Arroyo came up as the best!   Knowing that fish tacos were a favorite with Robert and Kathy, we went on a scouting mission before they arrived. 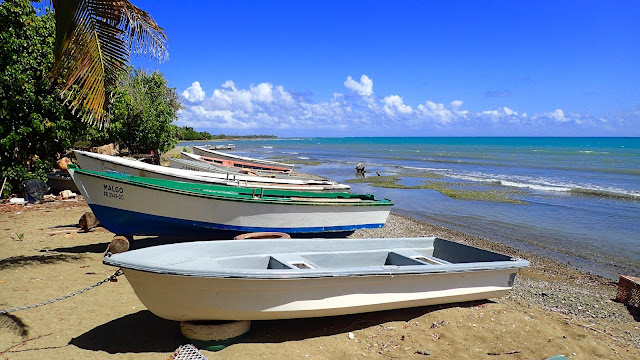 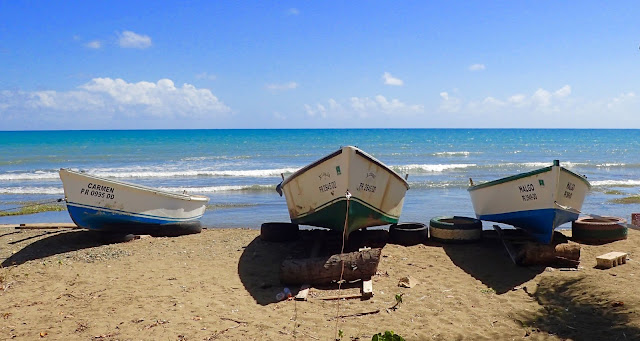 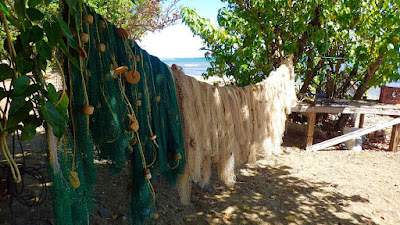 Well, we found the beach, and the Fisherman's house, but he wasn't there.  Asking around, we learned that he sometimes has fresh fish in the morning, and other times in the afternoon.  It all depends upon the weather.  If the conditions are rough, the fishermen don't go out.

We left that day empty handed, but late in the week when Robert and Kathy were here, we returned! 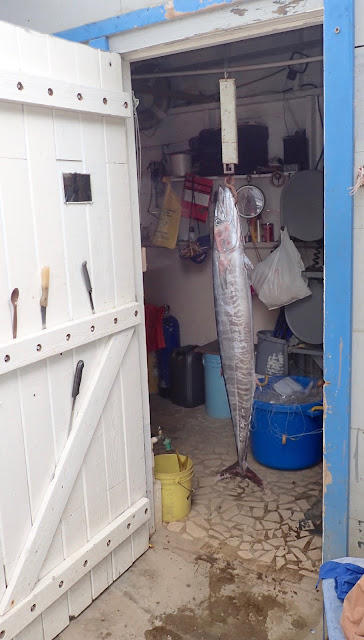 This time, we were in luck!  When we arrived, they were just finishing bagging up a huge quantity of Ballyhoo for a local sport fishing guide.  He took his bags of baitfish and we moved in on the only gamefish they had today... a nice sized Wahoo!

There was a fisherman there who spoke fluent English, for which we were thankful.  The Old Fisherman who owned the place didn't speak much English... or maybe he was just quiet.  But he went right to work after we had agreed on paying $4 per pound for this fish, taking it over to the scale to be weighted.

It was fun watching him wrangle this slippery thing, and he even dropped it once before managing to get it hooked on the scale.  I swear it read 30 pounds, but when he relayed the number to our English speaking friend, he quoted us $80 for 20 pounds!


You might think that $80 is a lot of money, but this fish would provide so many meals and the fish would be as fresh as can be.  We've paid far more in grocery stores back home.  And it was the only fish available today, other than one Barracuda...  We are still very wary of eating Barracuda because of the possibility of getting ciguatera, a parasite that some species of reef fish can carry.

Part of the price haggling process included the fish being cleaned.  In Puerto Rico and throughout the Caribbean islands, fish are more often cut into steaks than they are filleted.  I'm not a fan of steaks because I just can't stand bones.... So, I asked if it could be filleted.  A look of doubt clouded the man's eyes, but our friend convinced the Old Fisherman to do it for us.  Then he proceeded to instruct him HOW to fillet the fish!  This would be the first time he's ever filleted a fish!!!

While our fish was being prepared for travel, we looked around the place.  It was very clean except for the fish scales littering the ground beneath the cleaning table.  Nets were folded neatly and hung out to dry.  The boats were all immaculate, no bottom growth and no fish carnage left inside.  These men take obvious pride in their profession.

The Barracuda was also in the process of being cleaned and the guts were attracting a school of huge Tarpon.  We've often seen these gentle giants fly into a wild frenzy when scraps are introduced into their midst.  Today was a perfect example of this and we watched, delighted as they thrashed the water's surface!

The Tarpon had some competition for today's fare... a flock of Frigatebirds was circling overhead, diving and snatching at whatever they could grab.

When the Old fisherman was done relieving our fish of his bones, he brought the huge fillets down to the water to rinse. 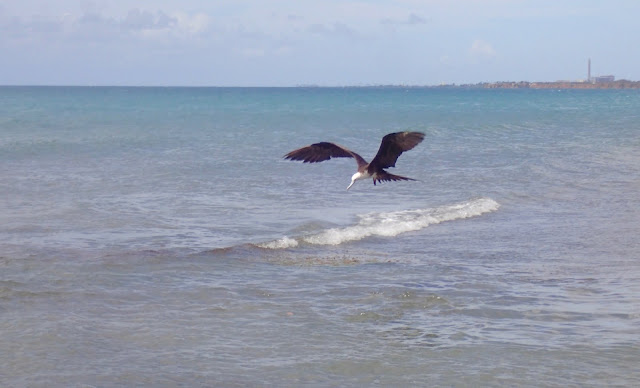 We watched in awe as these huge birds went after the scraps.  They flew right over our heads and the fishermen threw scraps up for them to snatch from the air.  I asked if they could hold the bits so the birds could take it from their hands, but they said that was a good way to loose a finger.

Speaking of losing a finger... When the Old Fisherman handed me the heavy bag of fish, I noticed that he was bleeding copiously from one hand.  I felt so badly about it and apologised profusely that my wish for fillets had caused him to cut himself.  He waved it off and went to get a scrap of torn t-shirt to bind the injured finger. I went out to the car and dug through the first aid kit and found him some big bandaids.  He seemed sheepish about it, but he took them.

I love that such a mundane thing as buying fish can become an unforgettable experience.  The people here are just so friendly and they'll do anything they can to please... It's going to take us a while to eat all of this fish, but I think we've found our Fishman!

In the afternoon we went out to the boat hoping to get some snorkelling in.  Unfortunately the winds had the reef whipped up making snorkelling futile.  Visibility would be terrible.  So we piddled around, just enjoying the day.  A couple of Manati were stirring up sediment in the bay.  We got as close to them as we dared on the dinghy ride out to our boat.  This was the first time we've seen them here and I hope it becomes routine! 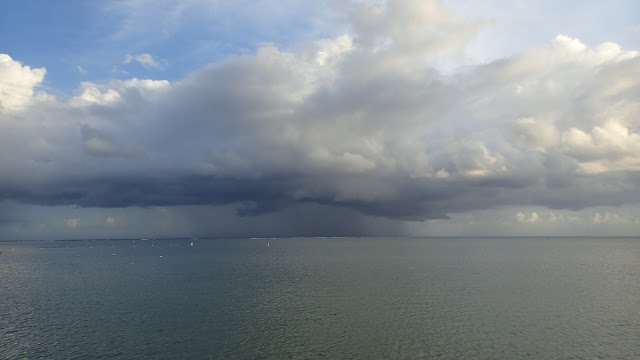 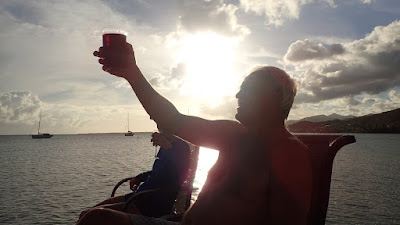 This was our last night with Robert and Kathy.  We have enjoyed their visit so much and can't wait to have them back to see more of our island.  There is only so much a body can take before it cries no more!  Relaxing on the dock of the bay with our friends Don and Janis while the sun set and distant rain balls passed, was the perfect way to end our time together.  Tomorrow we will do a quick run-through in Old San Juan, then drop them at the airport.  Or... maybe we'll just keep them!