Fun With Don And Jan

Plans change and we're really good a rolling with it.  Janis and I had concocted a plan to take her guests to see the NOAA Hurricane Hunters on their Caribbean tour stop here in Puerto Rico.  It would require a drive to the exact opposite side of the island, a drive that would take at least three hours.  When Janis told me that her guests had cancelled their visit, we wavered only momentarily before deciding to go on this trip without them!

When you live in Paradise, it's really easy to get complacent and stop exploring your home island.  We are determined not to let this happen to us!  We loaded into the van at 7am with snacks and swimsuits (just in case) and off we went toward the north side.  From there, the itinerary became fluid.  We had plenty of time to get to Rafael Hernandez Airport in Aguadilla, so we just took off and drove, with stops wherever we pleased!

First stop to pick up a nice picnic lunch from the deli at Agranel Market, then on down the winding road to sea level where we found this little slice of heaven that is Playa Mar Chiquita!

The beach is a perfect crescent surrounded by coral sand of a uniform beige.  The beach slants sharply from the ring of palms and sea grape that provide shade in the intense Caribbean sunshine.  A rock basin begins where the sand ends, and if you look closely in the nooks and crannies, you'll find handfuls of sea glass!  I've got an unwritten rule that I have to continue searching until I find at least one piece of blue.  I had to search for a while to find one, but a tiny piece finally released me to continue on with our day! 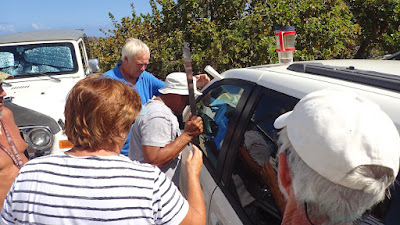 So we enjoyed the stunning beauty and picked up handfuls of sea glass, then turned back to the van to continue on our way... only to be stumped by the refusal of function by the keyless entry fob for the Caravan.  WHAT???  The battery on the key fob was completely dead and there was no way to get into the van.  Janis and I drifted off to the shade of the nearby food truck while the men engaged the assistance of our recently met friends, Louie and Gringo George.  Luckily somebody on that beach had the tools we needed to get into the van.  Not going to think to long on that one...  Soon we were about a pound lighter due to loss of bodily fluids through the pores, but happily on our way to the next stop.  I guess we'll be trusting the universe not to let anyone break into the van for the duration of our trip today! 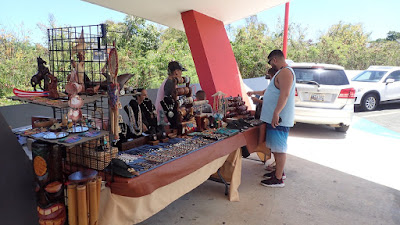 Driving onward, we pulled over to take a look at the coastline view from the safety of a roadside lookout called Mirador de Guatataca.  There were vendors set up selling jewellery, keepsakes and of course, a food truck! 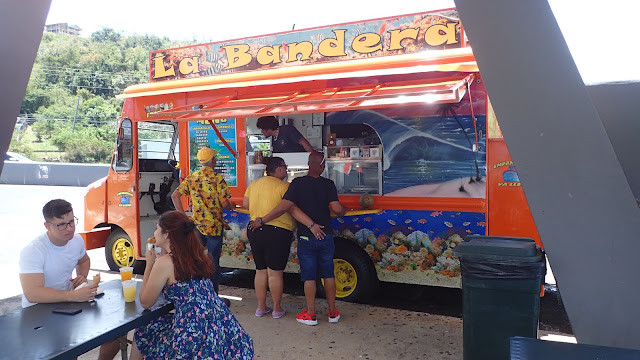 Louis from the deli had told us about a face carved in the stone mountainside that was somewhere in this vicinity.  We couldn't see it in the rocky face of the scene before us, so Don asked around until he found someone who knew where it was.  This wasn't the place, but it was just a minute up the road to the west.  We took off in the van looking closely at all rocky surfaces until we all burst out laughing when we finally saw it.  Look closely and see if you can make out the face!

What doofuses we are!  I had some fun helping others get photos of themselves with the face, then posed for a quick one while my people threatened to drive away without me if I didn't bet my butt back into the van!  By this time we had built up a powerful thirst and the locally advertised Virgin Pina Coladas found everywhere were not helping.

Our next stop was just another beautiful beach. Ho Hum... They're everywhere! 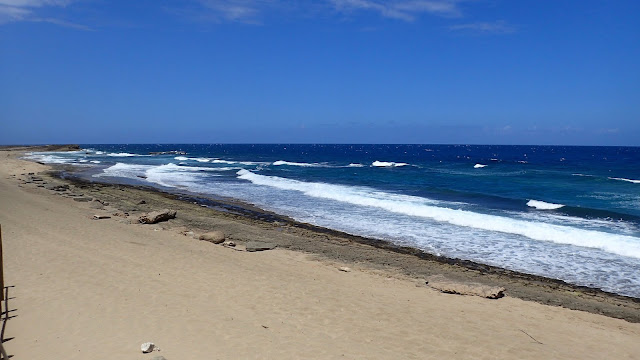 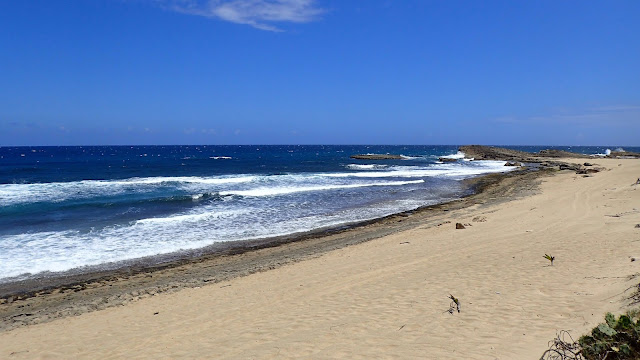 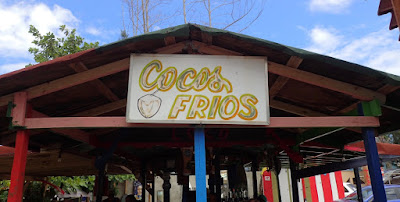 Soon we found refreshment!  Just down the road at Jobos beach, we visited a little beach bar to get those Pina Coladas!  They were not the best ever, but the were icy cold and hit the spot! 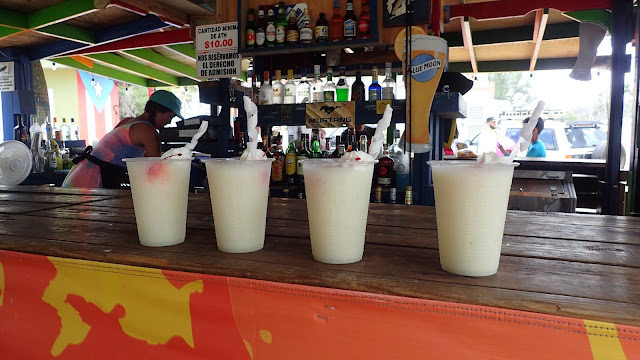 OK, OK!  Enough messing around.  Let's get down to business.  The reason for today's outing was to see the hurricane hunter planes!  We finally found the airport and the long line of vehicles still waiting to enter.  The even was due to end at 3pm and it was already after 1!  We found parking in the sea of shimmering heat just about the time the rain clouds cooled things off. 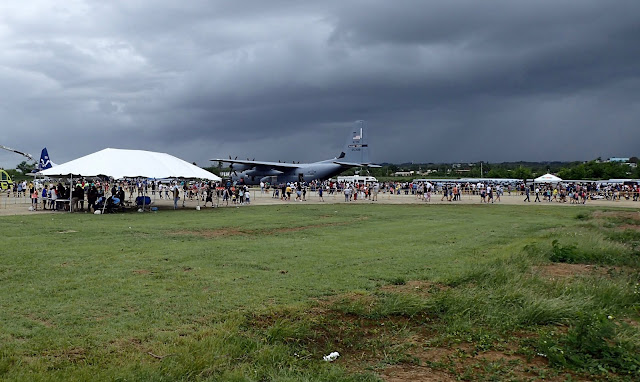 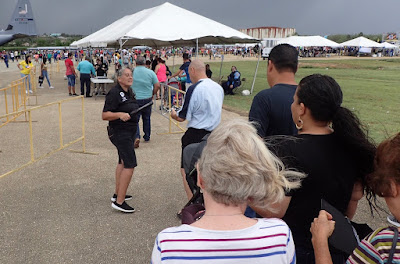 We didn't have to wait long to get in, but we did have to be checked for weapons both bodily, and then someone picked through our bags looking for contraband.  We were waived through and began looking for the end of the line of people waiting to get a look inside the Hurricane Hunter.  Realising that it snaked through the entire venue and out the back, we voted unanimously to skip it.  I'm sure we can find photos online if we want to! 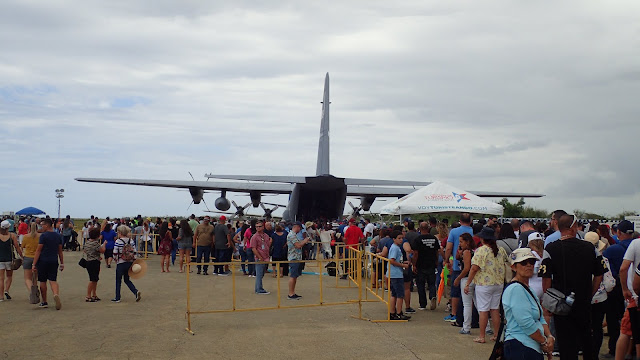 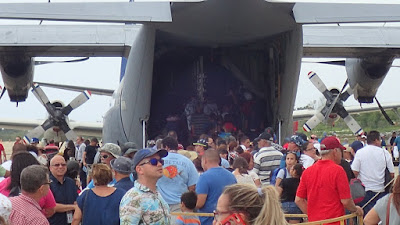 We checked out some of the other vendor tables and heard about the work done by the Puerto Rican Customs & Border Patrol and the Puerto Rican National Guard.  They had some equipment on display and were happy to tell us all about their work. 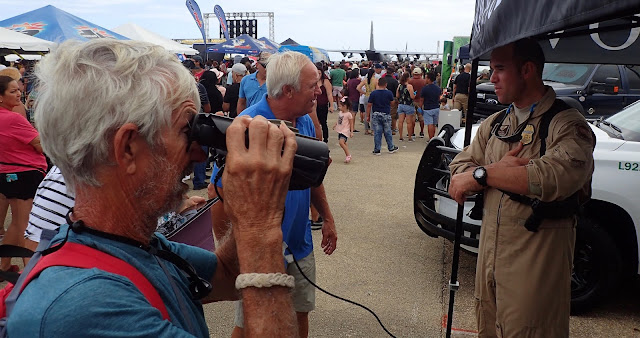 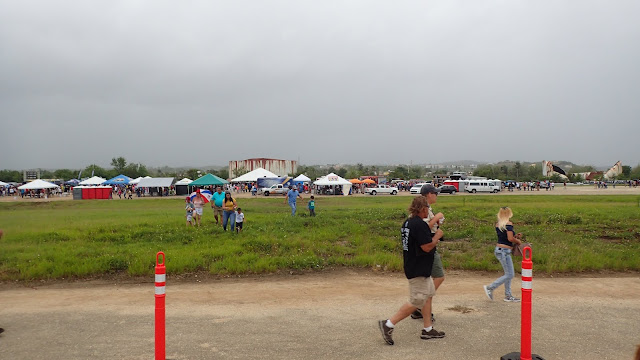 We escaped the rain just as the first drops began to fall.  Rain followed us out of the airport and all the way to Puerto Real where we stopped in to see friends at Marina Pescaderia.  Why didn't we get any photos of that???

The late hour convinced us that we must save the lighthouse at Cabo Rojo until next time and hurry on to dinner at Cocina Fresca.  There we had a delicious meal that is in direct contradiction to the fact that the restaurant is housed in an annex to a Shell gas station.  The stuffed chicken breast was delicious and we returned home just after dark with full tummies and tired from all the laughter.

Janis will call her absent guests and tell them about all the fun we had without them!  WE are so lucky to have these friends here with us to accompany us on our adventures!  So many more good times to come with Don and Jan!