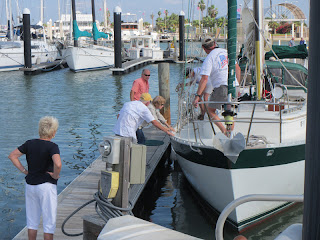 Bruce was invited to sail this year in the Harvest Moon Regatta aboard La Vie Dansante, another Catalina Morgan similar in size to ours but not exactly the same boat.  The crew list looked promising so Bruce signed on.

Bruce also volunteered to help the owner, Ron take the boat to Galveston during the week before the race since the other crew members had day jobs.  I got to go along for the first stage of the journey, Corpus Christi to Port A.  The plan was to leave Port A on Tuesday.

Sunday morning we picked up Robert and Kathy and headed for the marina.  Robert would also be making the trip to Galveston.  He joined us on Sunday so that he could familiarize himself with the boat for the offshore passage manned by a crew of three. 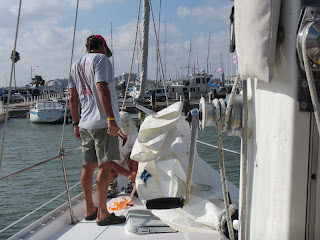 The wind was blowing 18 kts with the promise of more.  We had plenty of help getting off the dock just after Rima, who would also be making the hop to Port A.  Bruce brought along his stay sail and the decision was made to set it up for use today.  We haven't even used it on our own boat yet so this would be a new thing for us. 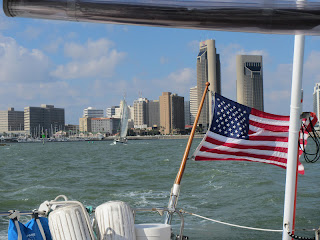 We motored out the Gap with just the main up and Rima in our rear view mirror.  They would stay there the entire way and there was evidence of some prior "trash talking" about the end result of this race already.  Ron is SURE that his first HMR will bring him glory. 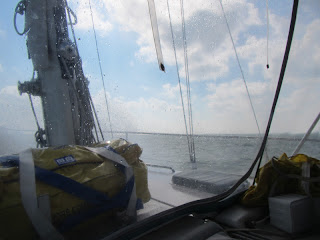 We found the Bay to be quite bouncy so we zipped up a couple of panels on the enclosure and settled in comfortable and dry for the ride.  Ron's boat is a "cousin" to ours and we were curious about possible similarities and differences.  I noticed that it seems to have a slightly more lively ride in these conditions, evidence of the lighter weight more sleek design of the Nelson Marek version. 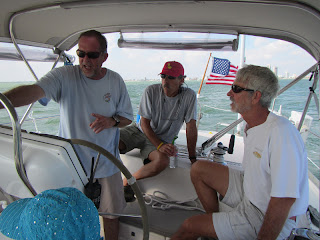 Kathy and I caught up on chit-chat while Ron oriented Robert and Bruce about his equipment. One of the mistakes we made on a previous sailboat race with friends, was that it was assumed that we knew how to work the chartplotter and radar.  Once the Captain went below for rest in the night, it became painfully obvious that we did NOT know how to use it and we had to wake him up for a crash course.  We're not making that mistake again. 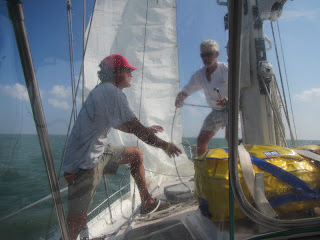 With the lessons out of the way, the guys decided it was time to see if that stay sail could help our progress.  We were being bashed by waves off the starboard bow.  Perhaps the small sail could provide some stability.  Bruce and Robert went topside and made short work of getting it raised and trimmed. 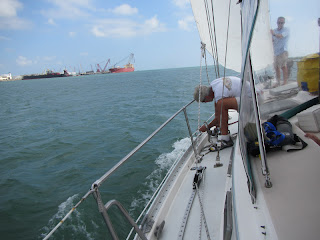 Maybe I spoke too soon... with these guys, trimming is an ongoing event.  They happily tinkered with that sail all the way across the Bay.  Moving right along... everyone got a turn at the wheel and we made good time.  Once in the Ship Channel, we were given an additional boost by the outgoing tide.  We were doing steady 9+ and it felt like standin' still.

We always enjoy the dolphin action in the channel and today was no different.  We waited and waited for this big boy to surface and suddenly he peeled off and headed for the Big Red Boat!  Fun stuff! 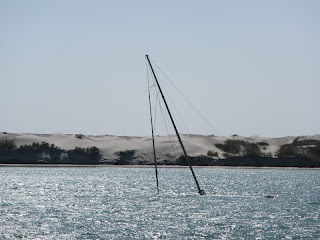 Continuing on, we neared Piper Channel and, to our amazement..., we saw this!  Some poor guy has had a really bad day!  Later on, I learned that this boat belongs to one of our newer BYC Club Members.  It is a wooden boat that he recently had hauled out for some work.  When it was splashed again, it had some leaks, which were fixed... but on this day, one of the planks under the waterline just "popped out" and the boat sank.  BUMMER! 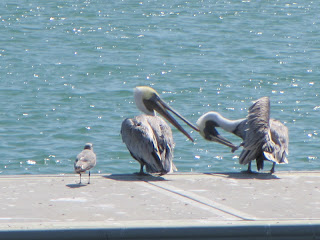 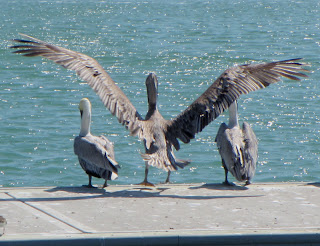 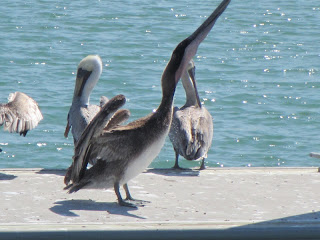 All too soon, we arrived at the Port A Marina.  We found our slip on the transient docks and tied up.  I entertained myself watching a group of Brown Pelicans interact on the pier.  They fasciate me... 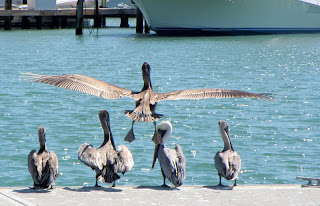 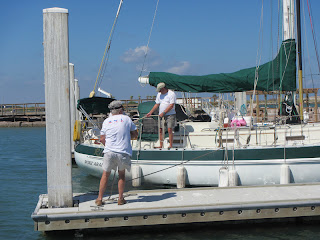 Suddenly... there was a commotion in the next slip where Rima was pulling in.  They had stopped at the fuel dock to top off for the race and were just arriving in the slip next to us.
There was some sort of miscalculation and the next think I knew... one of the guys was in the water!  I think the line he was securing on the cleat popped off causing him to stumble back and bloop!  In he went!  The secured the boat while he waited patiently and then he was hauled back onto dry ground.  Luckily, his cell phone was NOT in his pocket and, other than a few scratches on his shins, he was none the worse for wear. 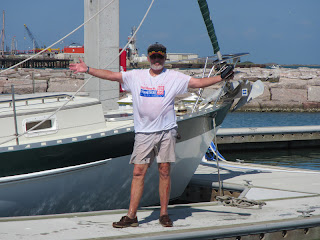 Whaddaya gonna do?
That was the end of our day, we had a sandwich, thanks Ron (and Jo) then we loaded up and headed for home.  This was the end of my vacation week and it's back to work tomorrow morning.  Just three short weeks (or so) until the bottom job on Dos Libras is done and we can begin moving aboard.  I'll be lonely without Bruce this week but will be back on the boat by Friday to enjoy the festivities!