Our plan had been to work the BYC food booth for HMR this year.  Our boat is in Port A and I took Thursday and Friday off.  Bruce got a better offer and went off on La Vie Dansante on Tuesday leaving me home as ground crew.

BYC had promised to work longer hours this year dependent upon the arrival of the pack  Last year, the majority of the boats finished in the night after our booth was closed.  LYC asked us to work whatever hours were needed and we agreed, hoping it would increase our sales.

Well, you can't plan for Mother Nature… this year, there were light winds early and then a Norther' hit and brought the pack in earlier.  Yay right?  Wrong!  They came in tired and cold which means that they didn't want a cold beer and just wanted to hole up inside their boats and sleep.

The booth did well, but we would have liked to have done better.  It's always a gamble!  I will say that the Club has lots of active new members this year so there was no shortage of workers.  This is a very good thing!

The "cold" weather and winds may have dampened our sales, but there was no shortage of praise from our patrons for being out here again this year and for the quality of our food.  We will be back!

Brittney and I volunteer for the early morning shift on Saturday.  Most of our friends are night owls and shun the pre-dawn hours.  It was really hard to get out of our nice warm beds and go out into the howling winds to make taquitos!

But we bundled up and it was a fun group.  The time passed pretty quickly and we were ready when the hungry hordes hit us. 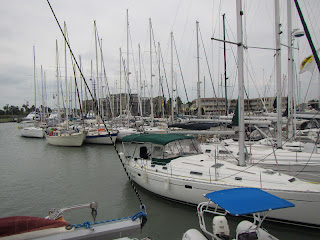 I always love seeing the marina filled up with racers.  They put boats in every available slip then stack them six and seven deep on the long dock.  Those on the outside have to climb over all the boats to get to the pier.  La Vie Dansante was on the outside of the pack and we made the trek about three times before the weekend was over. 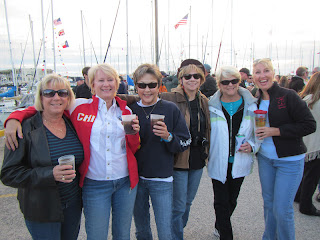 The weather cleared for a short time Saturday evening.  The winds died down thankfully and it was very pleasant for the big party. 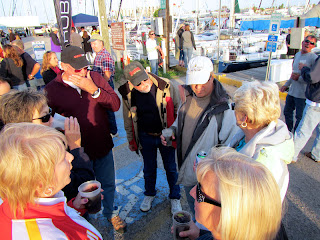 Our usual bunch was there  mingling with other Club racers and old friends.  The organizers did a great job this year and I saw no shortage of either rum or food.

BYC did very well at the awards with three of the four participating boats taking home trophies.  La Vie Dansante was fourth in class with no award going to that place…  Next year Ron!

This will be our last HMR.  This time next year… we should be "out there" somewhere!