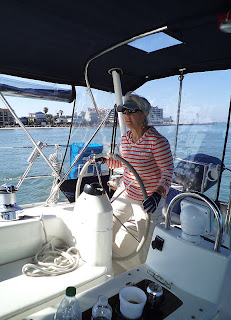 What says "Honey, I'd do it all again" like spending your Anniversary with half a dozen or so of your closest friends?  Mark and Brenda invited us along for a Saturday Sail aboard SeaFlight to kick off their 38th Wedding Anniversary and of course we agreed.  The day was gorgeous and the seas were kind. 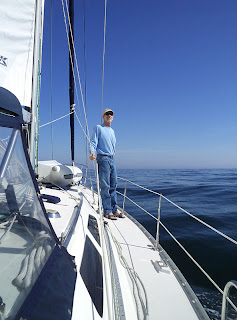 Bruce and I moved our boat back to the Port Aransas Marina a few months ago with heavy hearts that we would be leaving our CC friends behind.  We were thrilled when a few weeks later, several of our CC friends also moved their boats to Port A!  Woo Hoo!  Let the FUN begin! 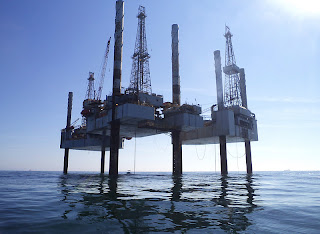 We sailed out of the Port A Jetties and turned towards one of the many oil platforms that lie a short distance offshore. 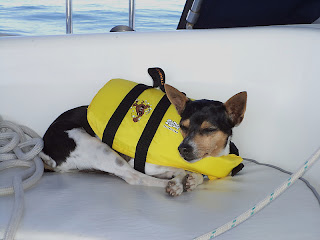 We had some rolly swells to begin with which made some of our eyes glaze over a bit, but by the time we got closer to the rig, things were settling down. 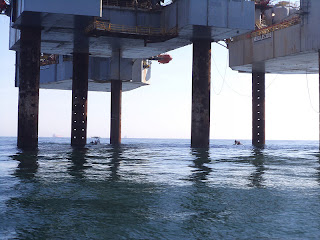 There were a couple of fishermen tied off to this rig and we did a couple of donuts around it so that we could watch for a while and see if they were catching anything.  We saw them reel in two or three in just the short time we circled. 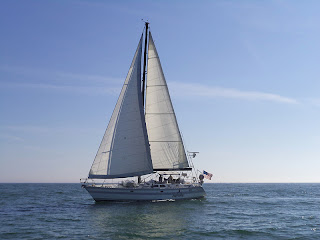 On our way back in we got a phone call from the Streeps... where are we, about 3 miles out... we're leaving the dock now, be there in 10 minutes.  Wishful thinking but it wasn't long before Merlin was right out there with us. 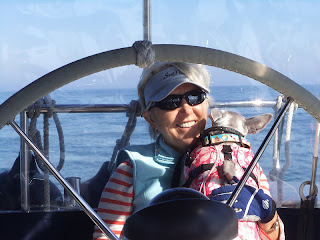 We turned and followed them back out for a while but lost interest and turned back for home. We were getting hungry and the dogs were looking green.  Lucy wouldn't let Brenda put her down as she clung to her shoulder. 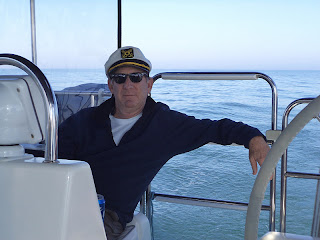 The winds continued to die off and the seas flattened out to nothing.  We saw a few dolphin rolling lazily about but that's about it.  There weren't even many ships anchored offshore waiting to come in.  One or two other sailboats could be seen off in the distance besides Merlin, bringing up the rear as we headed back to the slip.  Our Capitaine was stylin' in his hat. 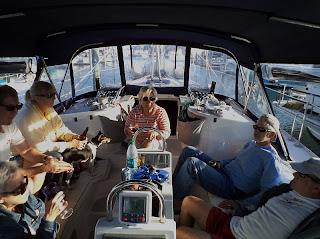 Once we docked the boat, we opened up the cocktail hour and waited for Merlin's crew to arrive.  We had a brief planning meeting and decided to send the boys to get tuna while the girls got the rest of the stuff for dinner on SeaFlight. 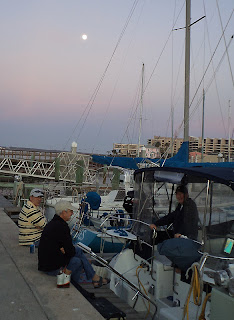 The moon was rising and it looked like it would be a beautiful night for an Anniversary Party.  Last night when Bruce and I got to the boat, I was so strung out from my work week, I piled into the V-Berth and went to sleep while Bruce hung out with the crowd.  They had a blast and I missed it.  Well I wasn't going to miss it tonight, although I did put on my pajamas so I could be ready to crash when the time came. 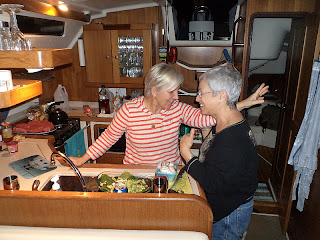 The girls were down below making a wonderful salad while the tuna warmed up. 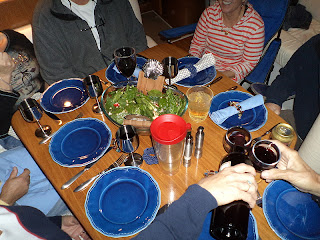 Bruce and I must have missed an episode or something because everyone else is on some kind of new kick where the dinner is served in courses instead of all together.  So we all sat down to salad and wine with baguette crackers and port wine cheese. 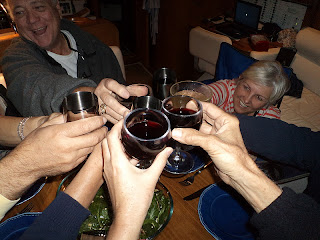 What's an Anniversary dinner without a TOAST?  Here's to another 38 years! 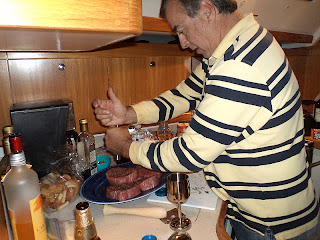 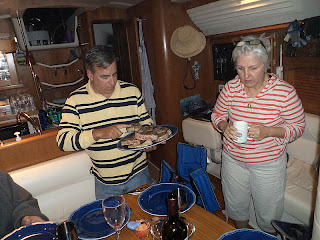 Not to worry... he had it all down and finally it was time to serve.  The tuna from the Port A Seafood Company is always sublime and tonight was no exception.  You get to pick your cut to the desired thickness and it's the freshest we've found anywhere.  You can't go wrong when the tuna is this fresh!  The steaks were giant and nobody finished their piece. 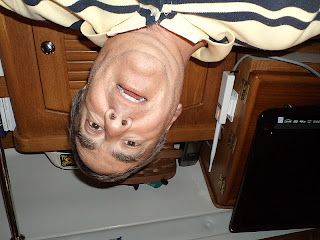 We cleaned up the dinner mess and started a game of GeezerWeezer, or something like that.  It was at this point that things began to go downhill... 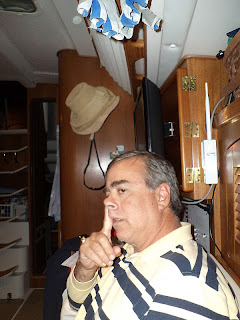 Anytime Bill is involved, things can be dicey... 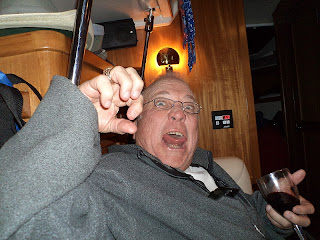 But when you add the older brother into the mix...  I have no words! 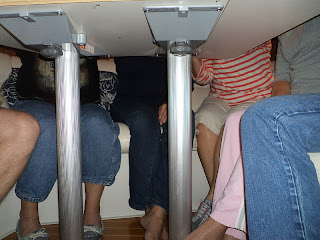 We somehow made it through three of these games which are sort of like Trivial Pursuit.  Boys against the girls, you have to pick tiles for question subject then advance your gamepiece by answering correctly.  There are a few curves thrown in but that's the gist of it.  The girls one the first game... here's the Winner's Circle photo taken by Bill.  That's me in the pink pajama pants. 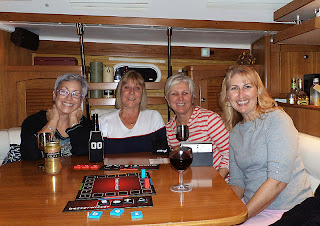 The boys won the next game so we had to play a third tie breaker.  By the time we were done there was nearly a massacre as Bill's brother got more and more under Jan's skin.  It was a close one but the girls prevailed in the end with a 2 to 1 win.  Bill is still pouting about the correct answer to the world's fastest animal... Cheetah.  He thinks its the Perigrine Falcon, but I got it wright with Cheetah.  You have to know what they want!