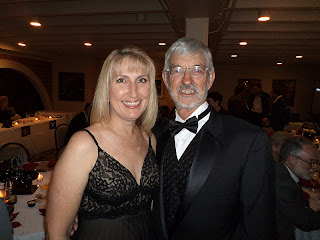 The month of December came and went without us being able to attend even ONE of the events held at the Club.  Saturday night we got dressed up and stepped out to attend our first of the New Year, the Officer's Installation Banquet.  Everyone seemed surprised to see us thinking we had dropped off the planet.  It's a new year and we're ready for it! 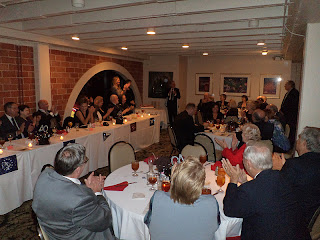 This year's event was held in the upstairs banquet room at the Water Street Seafood Company.  I didn't even know there was a room up there but it made a cozy setting for our group.  Phyllis did a marvelous job of decorating and everything looked festive. 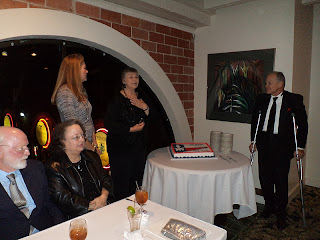 We have the Officer's Installation every year but this year was special.  It's the 40th Anniversary of Bay Yacht Club and that's something to celebrate!  We had some words from one of our charter members, Pat Arnold.  It's been a difficult year for the Club and hearing her speak about looking back through the years gave me a renewed sense of community and excitement about the changes in store for us this year. 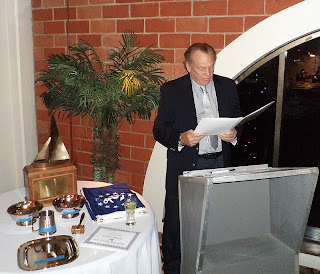 Pat's husband, Tom read to us his epic poem recapping the entire year of 2011.  He has done this every year since we joined the Club and it is nothing short of a marvel.  He covers every month of each year and most events and somehow brings it all together in rhyme.  It is quite a feat! 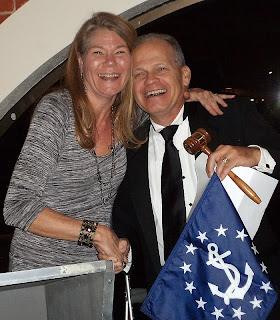 We had some cake and then it was time for Lisa to get up and present all of the awards and recognition certificates for 2011.  There was a long list of honorees with each parading to the front to accept their accolades.  Then it was time to bring up our next Commodore, Walt Crawford. 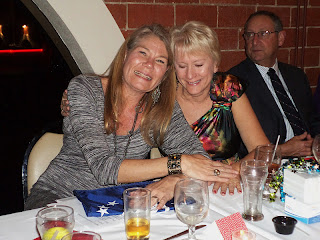 Walt took his burgee and the Oath of Office and Lisa gratefully collapsed into her seat!  It's OVER!  This long tough year is finally over and she had made it through... 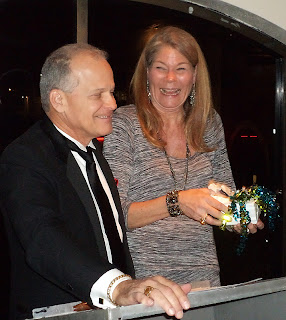 Well, she didn't get to relax for long before Walt called her back up to accept the Club's gift of gratitude for her year of service as the Club's most Senior Officer.  Lisa is only the second in Club history who has held the office of Commodore without ever having been on the Board before.  She received a very nice race timer wrist watch and seemed very happy with it. 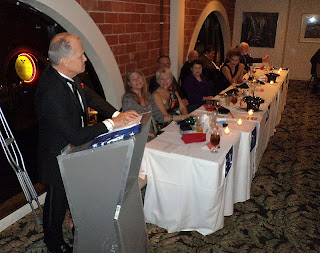 Walt gave a speech outlining his plans for 2012 and the changes he hopes to bring about.  His biggest idea for change is to encourage Club Members to use the Clubhouse for more than just weekend dinners and socials.  We are moving into the New Year with plans for weekday Bunco and Poker Nights.  We are also going to be making some big decisions in the coming year about building a new Clubhouse or moving the existing one onto land.  This is an exciting time for the BYC! 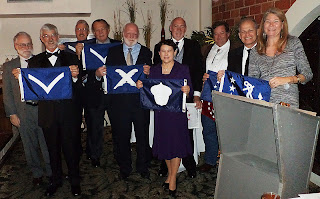 Next came the call to take the Oath of Office for the other 2012 Board members.  Everyone filed up and accepted their burgees and the group oath was administered.  Bruce is a second year Director on the Board this year.  We have a really talented group of leaders with a lot of big decisions to make this year. 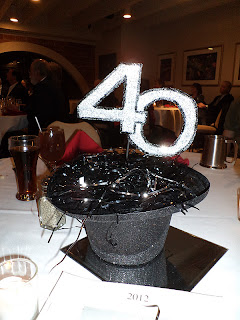 We stayed only a short time longer, chatting with a few Club members we hadn't had a chance to speak to yet... then we snuck off to home.  Happy 40th Anniversary Bay Yacht Club!