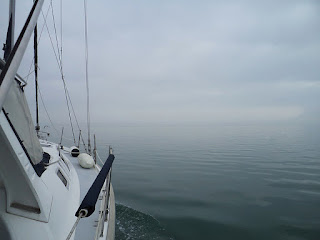 The New Year is off and running with the first Cruise of 2012!  This year's Frostbite cruise was practically balmy as compared to last year's freeze.  Walt and Judy took us up on our offer of help in getting Endless Summer over to Port A.  With the help of Stace, the five of us set "sail" at around 11am on Saturday headed that way.  We had very light winds... OK no winds... and a bit of fog as we set a course for marker 43.  Don't bother putting up sails as they would be useless. 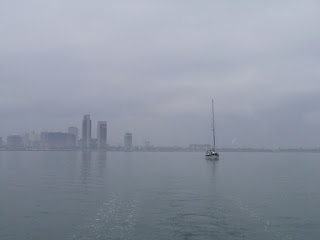 Ann and David closed in on us on Sanctuary with a boatfull of guests.  We tried to outrun them but not very hard and they easily overtook us before we reached the channel. 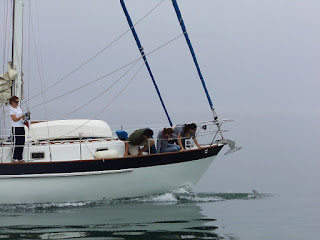 Just as they came alongside, a couple of dolphin began playing on their (minimal) bow wake.  You know it's calm when this is the best game in town for a dolphin!  The guests on board were very excited.  As is the norm with my cheap little digital camera, I missed the best shot, but here is the second best.  I got him just as he finished a roll... 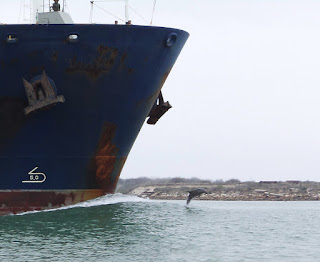 There was a little more excitement once we reached the Corpus Christi Ship Channel.  We had some tanker traffic and the dolphin there were taking full advantage.  As always... I love these displays of "Dolphin Joie de Vivre" 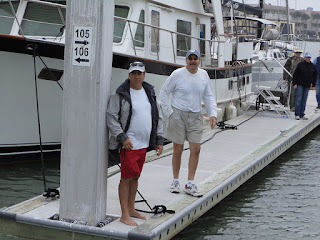 We did get a bit more wind with a cool front blowing in as we neared the Port Aransas Ferry lanes but as we were near our destination, we didn't bother putting up sails.  There's still the return trip tomorrow...  We radioed Merlin for our slip assignment and found a BYC welcoming committee ready to help us dock.  Walt did a marvelous job backing the boat right into the slip.  Not too bad for a guy with a recently broken hip! 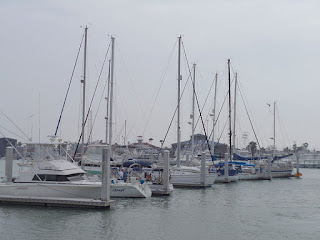 WE'RE HERE!  Well... our boat is already here so what's the big deal?  The big deal is the turnout for this cruise!  I think we had more than 15 boats show up for this not counting the four boats that stay here.  After the year we've had... this is great!  Every event we planned last year was battered by bad weather.  This weekend with it's little bit of fog and cool wind was a treat! 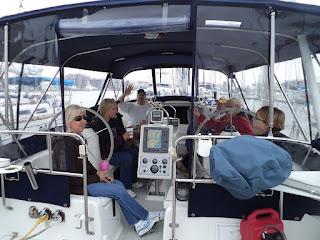 SeaFlight was the first of the "Host Boats" that we visited.  We had planned to help out but when Walt asked us for help sailing the boat over, we slinked out of it.  No worries... Brenda had a marvelous pot of seafood chowder simmering on the stove that warmed everyone inside and out!  We joined the throngs of happy sailors in SeaFlight's cockpit and had a taste. 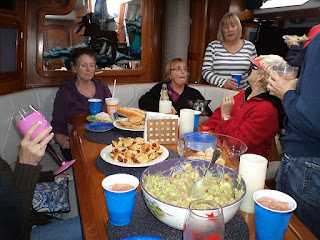 When all of the Chowder was gone, fickle crowd that we are... we all migrated over to our second Host Boat, Merlin.  Jan and Bill had a sumptuous spread laid out and we dove right in.  Their boat was all warm and toasty and the chatter was near deafening!  Bill was serving up some ridiculously delicious rum punches....  May I have some moa? 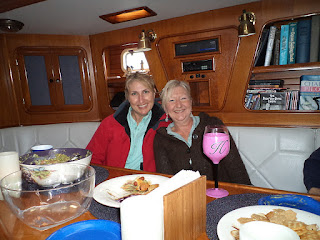 I shared the corner with Jo and a giant bowl of guac that was to-die-for.  Jo and Ron are planning their 5th Mardi Gras party at the Club coming up soon.  They weren't at the Officer's Installation Banquet held earlier this month when their names were announced as having (finally) won the prestigious "Cook of the Year" award for 2011.  Jo and Ron have put on the Mardi Gras party year after year and are only now reaping the rewards of fame and fortune beyond measure.  Kudos to you both! 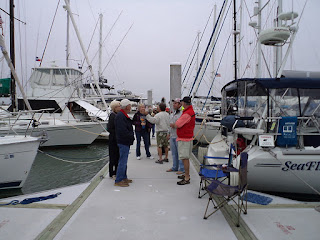 We whiled away the afternoon and early evening hanging out on the docks like a bunch of shore birds.  We had one more thing on our agenda tonight and when darkness fell, we began the short walk to Fins where we were to eat yet again... 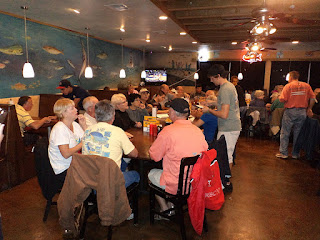 We had over 50 people show up for this dinner.  Some drove over to meet the boaters and we filled this little place up! 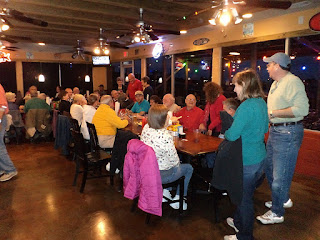 The staff at Fins had their hands full as they brought us all drinks and then began bringing out plates of food, family style.  Bruce and I brought up the rear with Bill and Jan and had to have more tables brought in from the porch.  We got there just in time to get the tail end of the food. 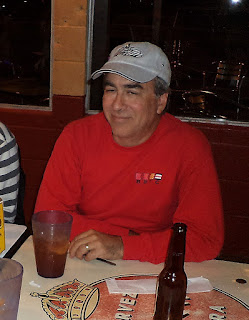 We weren't really very hungry after grazing all afternoon... but for $17 a plate, you have certain expectations....  Bill, just consider it as a donation to local charity and ask for your tax receipt on your way out! 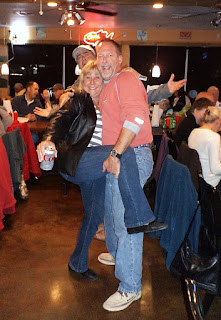 The waiters and manager are pretty good to allow us to take over their place each year for this cruise.  We got pretty noisy and a little rowdy and I'm sure their regular patrons were not too amused by our shenanigans.  There was one couple there who inquired about membership, so hopefully we picked up another new member in spite of it all.

We walked back to the marina where Bruce and I peeled off the parade to sneak back to our boat without notice.  I was ready to be in my jammies and Bruce put up little objection. 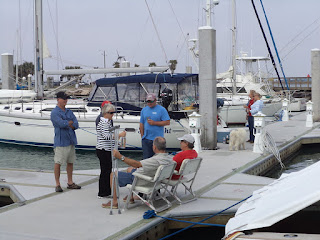 The next morning, we had coffee and set out for a walk to the San Juan for breakfast.  We figured the rest of our bunch would have partied long into the night and it was NO WAY any of them were awake.  We did see several couples out and about when we returned from breakfast. 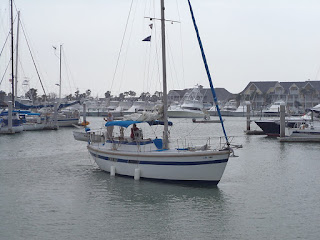 We did a few boat chores and even had a chance to show our boat to a prospective buyer... then put away our stuff and headed back over to Endless Summer with our gear.We were just in time to see one of our women working out her strategy to get their boat out of the slip with a bit of wind causing havoc.  We all watched as Sylvia wrestled this beast out of this small space while her husband, Jim gave quiet advice but didn't jump to the wheel and take over.  Sylvia got it out beautifully and we all cheered!  We are seeing more and more of this as our men patiently teach their wives to handle the helm. 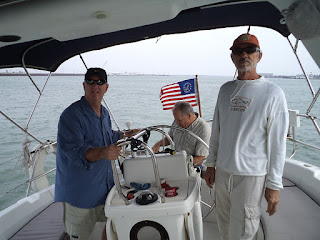 One by one, our little party dissipated as the boats set sail for home.  Our turn came and we had some help getting off the dock and were soon under way again. 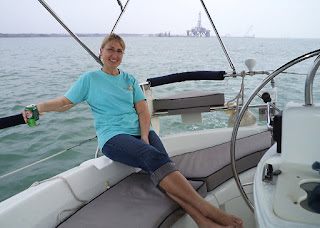 This time we had PLENTY of wind.  It was blowing in the 20s and gusty but the flat water of the ship channel made for a comfortable ride once we got the sails situated. 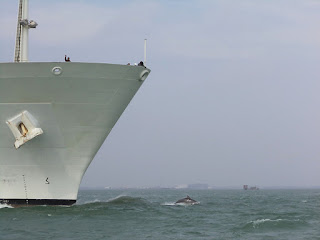 The sail back to Corpus Christi was punctuated by the obligatory dolphin show... As this military vessel slid by us we were treated once again to this glimpse into the lives of these marvelous creatures. 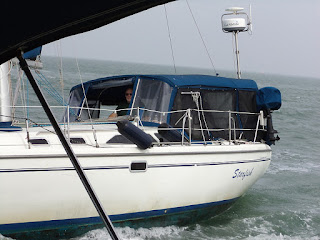 The winds moderated before we got out into the Bay, giving us a chance to have a picnic.  Is that all we do?  EAT?  We had nice flat(ish) water and some holes in the breeze before it settled down to a nice 15 plus kts the rest of the way.  We said goodbye to Starfish as we left them behind.  See Ya at the dock, Chip!

We drowsed our way across the Bay in the weak sunshine and then once docked, scrambled to get all our gear off the boat.  We had to get back to reality and prepare for the work week.  More and more I'm thinking "This is my REALITY".  I'm counting the days until I don't have to go home!