Getting Our Life Back Weekend 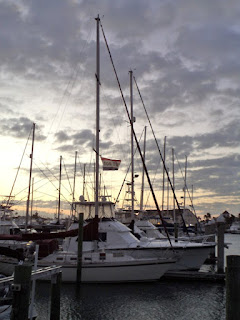 Bruce and I have been trying to extricate ourselves from the many duties and responsibilities we've assumed in the past two years or more and this weekend, we've begun to see the fruits of our efforts.  Somehow I found myself off work at 3pm on Friday and we threw some things into the van and escaped to the boat!


I will say that since we've had Elan for sale, we've been limited as to how much we are able to relax and spread out due to the fact that we never know when someone might come along and want to take a look.  Every time we come for the night or weekend, we find that we've forgotten to bring some "vital" piece of stuff needed for casual weekend boat activities.  We finally gave up and quit trying to cook on board so as not to have to clean the galley to "boat show" standards.  It also cuts down on the amount of stuff we have to haul out here and gives us the opportunity to eat out, which is my real ulterior motive.


We arrived here at about 4:30 and grabbed a beverage for an evening stroll.  We were checking out friend's new slip over on the fixed docks and were hailed by those very friends.  We hadn't expected any company this weekend but were pleasantly surprised when Bill and Jan showed up. 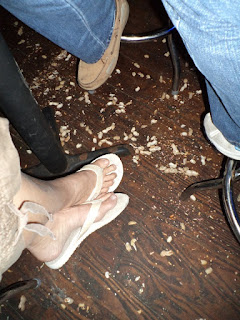 We made quick plans and ended up having dinner at the Wild Horse Saloon. We agreed upon this place at Bill's urging and were not disappointed.  I was up for trying something new...


The Saloon is not very old but when you enter, it looks like one of those old places that have been around for ages.  No frills, just peanuts on the floor and darkness brightened by a multitude of neon signs.  We found a tall table easily as only the bar seats were taken at this time of the evening. 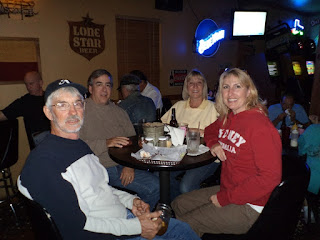 We ordered drinks and I found the novelty of husking a peanut and cavalierly tossing the shell onto the floor quite liberating.  We all settled on burgers and fries and felt a little flutter when Larry Joe Taylor came in the door with a couple of cronies and sat at the table right next to us.  I got the distinct impression that he wished to pretend to be incognito, so we obliged.  It's gotta be hard to be him and have people hanging on all the time.  He's just a guy after all... I think he was even wearing that same white shirt the last time I saw him...  It was funny though how when I got the waiter to take our picture, LJT was hiding in the background.


We finished up and joined Bill and Jan back on Merlin for a rum punch.  The night was much cooler now so we hung out down below.  Typically Bruce and I head for bed at this point in the evening, but one of my New Year's Resolutions is to be more fun... that means no more going to bed at 8 pm.  Bruce was the one who threw in the towel first this time and we slunk off to the v-berth somewhere around 10 pm.


My favorite thing about sleeping on the boat are the sounds you hear through the night.  We had a change in the weather and I knew it by the way the boat sounded.  Sometime in the night, things changed.  New sounds and more rocking.  The Norther' had arrived.  This means we really need not spring out of the sack in the morning because it will be blowing hard and much cooler.  I snuggled down and enjoyed the forced inactivity. 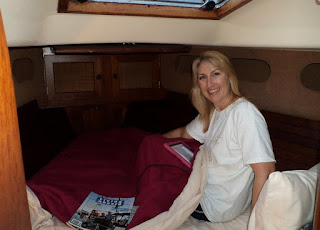 We abandoned sleep at about 6 am but didn't leave the v-berth until about 9:30.  I mused about whether I would ever be able to shake the compulsion to be doing something all the time and just go with whiling away the time following the leads on the Internet or reading a good book...  I gave it a good try this morning.


We finished our coffee with Bailey's and drove over the Beaches for breakfast.  We had the biscuits and gravy, the best anywhere and tried the bread pudding with more coffee.  We were greeted by the owner, Bob and had a long conversation with him.  He's quite nice and is studying the art of BBQ which is evident if you ever get a chance to try his pulled pork.  He said he's toying with the idea of doing whole hogs but hasn't launched it yet.  I'm OK with it as long as I don't have to see the thing.  We talked to him about working up a proposal for possibly catering a future BYC Cruise to Port A. 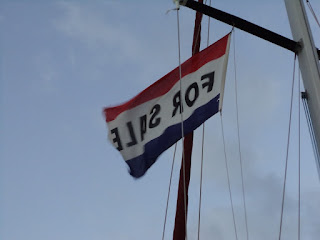 Back at the boat, the cool winds were blustery and wild.  I had a walk on the beach in mind but a nap seemed a more likely pastime at this point.  Hey, it's the weekend and I'm trying to relax and go with it.  I stretched out in the v-berth under the warm sun from the hatch above my head and dozed away an hour or so. 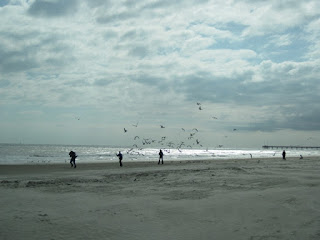 Once again the compulsion to be doing something seized us so we packed up our stuff and drove to the jetties for that beach walk.  I made some sandwiches... heavy emphasis on on the "sand"... which we ate in the van while watching people feed flocks of gulls.  Aren't tourists cute?  The winds were really blowing the sand which was all over us already and we weren't even out of the van yet...  We gave up on our walk and headed for home. 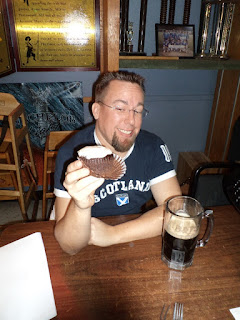 We had planned to stay on board for a second night but had received an invitation to an impromptu 40th birthday celebration for our friend Clay.  No way could we miss it so we showed up at the appointed time at B&J's Pizza and joined the fun.  It's been a while since we've seen Clay and his family but he is one of those friends that you can just pick up where you left off and we always enjoy his family.  We ended our Saturday with lots of laughs and a scrumptious cupcake.  I can't believe Clay is 40...