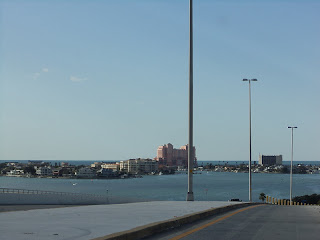 We left St. Petersburg with heavy hearts, first because there was so much left there to explore, and second, because we had travelled as far "away" from home as we would get on this trip. It was time to backtrack.  We stopped in Largo Florida to see a house my oldest daughter could potentially call home, then we pressed on to Clearwater Beach Florida, where we thought we might find a place for the night.  It looked inviting from afar. 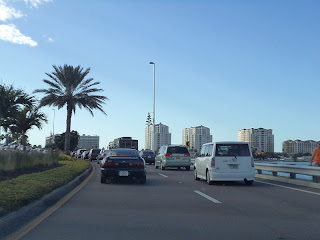 We quickly changed our minds once we reached the barrier island and the massive ball of TRAFFIC!  Nothing moved very fast.  All we wanted was to check out their marina, but after 15 minutes of crawling through the parking lot, we bailed.  This place was NOT for us.

Our next destination was Foley, AL where we would spend a night with the Waltons.  We wanted to knock off a few hours today to shorten our drive tomorrow.  So we headed back to Crystal River and got a room at a Best Western right off the road.  This was by far, the least wonderful place we had bunked, but it was clean and quiet.  We ate the cold cuts and cubana bread we had brought with us and hit the sack. 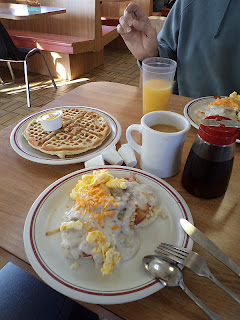 We were back on the road early the next morning.  We stopped again for our last "foreigner" breakfast, this time at the Hudle House, a Waffle House knockoff I suspect. Bruce voiced his thankfulness that there aren't any of these places near home, or we would be enormous!  As it is, we split a plate and this was what we each had to eat.... amazing!

We travelled on to Foley, AL. where we stayed a night with friends and former members of BYC, the Waltons.  I took a break from taking pictures for some reason so there are none of this portion of our journey.  The Waltons welcomed us into their homes warmly and extravagantly...  Their place is huge and gorgeous nestled in the scenic rural town of Foley.  Lynn took us on a short drive to Gulf Shores, AL.  It's a beautiful beach destination with lots to do, including a visit to the famous Lulu's.  This place looked like it would be fun.  It's owned by Jimmy Buffet's sister.  It's on the list of places to revisit, as is Florabama!  We checked it out on the advice of another friend from the Club, but found it undergoing massive remodelling.  It was still crowded, but we'll check it out next time through.

Susan and Lynn fed us a marvelous home cooked meal, which was such a pleasure after eating our way across four states in greasy spoons and tourist meccas.  Thank you SO much for your hospitality.  Our room was fit for royalty and we spent a restful night there once our stomachs quit aching from all the food we had consumed.

Next morning, coffee and conversation, then back on the road.  We stopped over at a marina to take a look at a Bavaria Ocean 40 that was for sale in Mississippi but the Brokerage was closed as it was New Year's Eve.  Too bad, Bruce really liked the looks of it, although I still think a 40 ft boat is not going to get it. 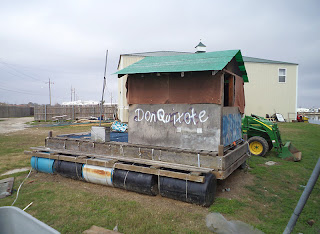 We pressed on to the Seabrook Marina and Wand'rin Star, which would be our home this final night of our trip.  Steve took us around his marina to show us the highlights.  He's been talking to the neighbors and picking up interesting tidbits.  This thing carried a family of 5 down the Mississippi from somewhere up North.  There's gotta be some kind of story there... 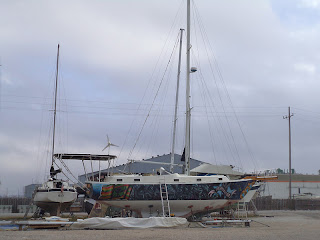 There are quite a few "Katrina" boats here on the hard, casualties of the storm in various states of disrepair.  Some still the property of the owners at the time the storm came through, and others newly purchased for a song and in the process of being lovingly restored by their new owners... 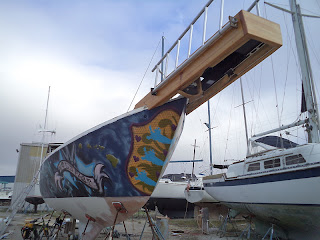 Another story here, surely.  Rumor has it that this boat is being made ready to sail to Hawaii.  Hmmm. 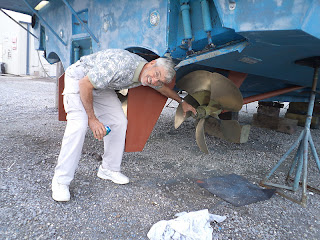 We continued on our walk around the yard.  Bruce is seen here trying to hide a massive case of "Prop Envy".  Who needs this much forward motion on the water?! 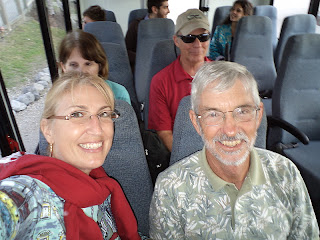 We collected Lynn from the boat and walked the short distance to the RV park next door, bought our tickets for the shuttle bus and boarded for our ride to the French Quarter.

This was the BEST way to get there, no parking problems, no traffic headaches.  Just ride up in style and be at the appointed spot at 8pm to  catch our ride back. 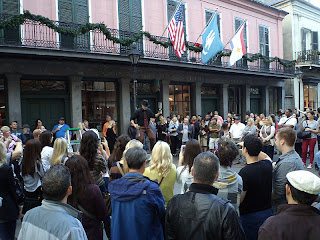 This would ensure that we escaped the madness that would surely occur in the French Quarter on New Year's Eve. 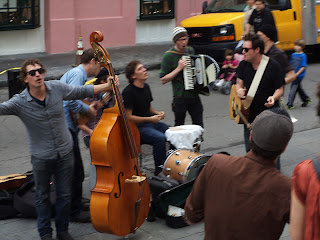 We strolled through the streets, briefly enjoying the entertainers then moving on... 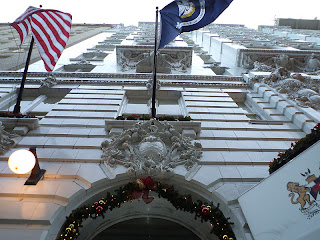 We stopped in at the Hotel Monteleone to see their Merry-go-round bar. 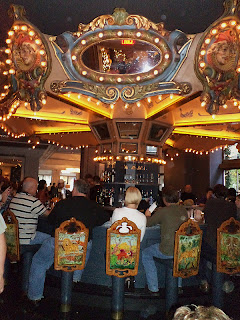 It was pretty neat but very crowded already so we only stood and watched it go around for a while. 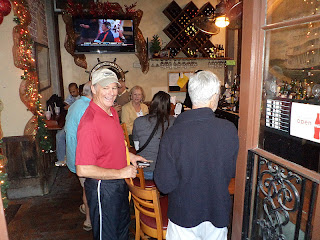 I wanted to stop in at the Cafe du Monde for beignets.  This is a Must-Do in the French Quarter but when we got near the place... I stared in disbelief at the ridiculously long line out the door.  Well, we would Must-DO it next time!  We stopped for a beverage across the street and continued on our way. 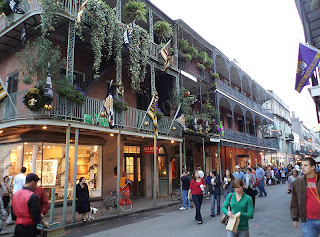 The streets of the French Quarter were festooned with declarations of allegiance to the Saints with the occasional LSU flag thrown in just to get the juices flowing.  There's a lot of infectious energy here, fun for me even if I have no idea who the Saints are... 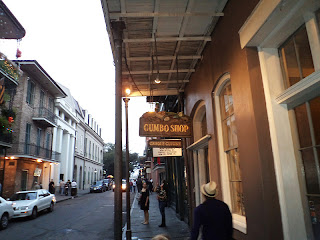 Lynn had a place for us to eat all lined up.  We weren't ready for dinner yet but wanted to scope it out so we wouldn't be scrambling later.  We easily found the Gumbo Shop... not to be confused with the less highly recommended Gumbo Pot found earlier. 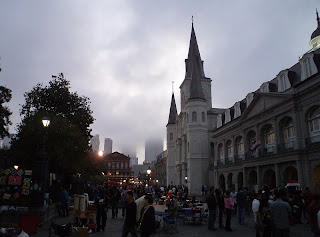 We marked our spot then continued on to see the fog rolling in on Jackson Square.  The square was lined with Palm and Taro Card reading Phychics and artists galore.  I came very close to having my cards read but didn't really "feel it" from any of those offering up their services this night.  Lynn was all for it but Bruce was wary... what if they told me something I didn't want to hear.  Maybe he's right.  Better leave the future to unfold as it will. 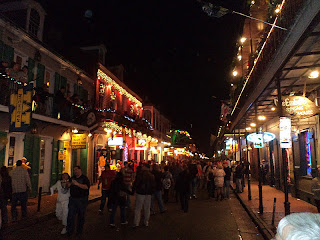 Darkness fell and the streets were really filling up.  We made our way back to the Gumbo Shop fearing that there would be long lines. 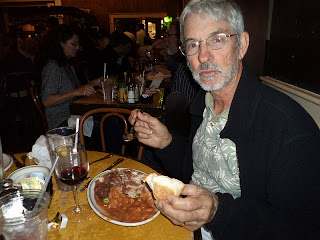 But Fear NOT!  We arrived at our dinner destination and were whisked right to a very nice corner table by a window.  The ambiance was a calm contradiction to the building frenzy outside. 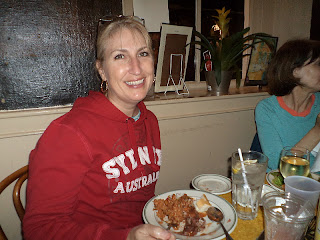 We ordered the Complete Creole Dinner to share.  Our Waitress, Rose was doubtful that it would satisfy us both, but we figured we could always order more food... 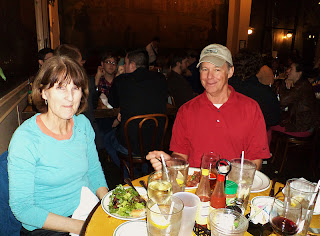 The Steakleys did the same and nobody left hungry.  We can't imagine eating all that food and still being able to walk out on your own...  Everything was delicious with delicate flavors but I'll say that the Jambalaya was exquisite!  I know... word choice seems odd, but it works for me. 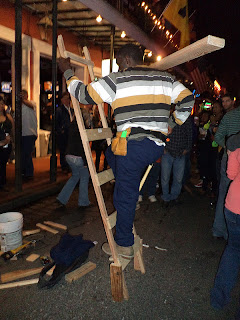 We left the Gumbo Shop with some time to spare before our scheduled rendezvous to be taken back to sanity, so we enjoyed some "people watching". 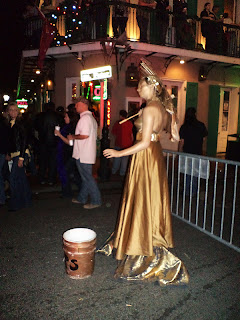 Who thinks these things up?  And isn't that kind of bad for your skin? 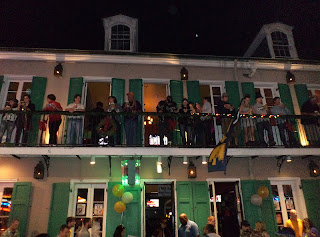 We soon noticed that there were people "People Watching" US!  The streets were really beginning to fill.  There were already drunks lying on the sidewalks and suspicious looking "puddles" here and there.  We made our pick-up spot in good time and were glad to see our shuttle coming up the street.  There was a younger crowd arriving for the debauchery and we wished them well as we boarded and they disappeared into the streets. 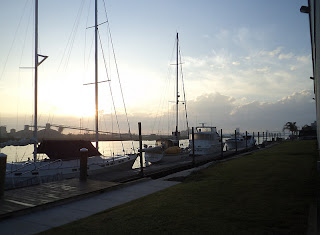 We were dropped off at the marina where we immediately made our beds, worried that the sporadic fireworks already popping in the distance would keep us awake, but it was not so.  Wand'rin Star is a solid boat and we slept well.  The morning was cool and misty and we were sorry to leave as this meant the end of our week-long adventure.  We said our goodbyes and headed for home.