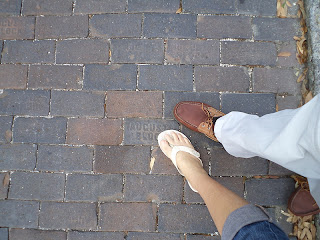 We lounged abed for a while in the morning, enjoying this plush comfort for a little longer.  We had learned our lesson about booking for two nights and were checkin' out!  We had breakfast quesadillas in the hotel lobby with Starbuck's coffee then loaded up our belongings and set out to explore St. Petersburg. 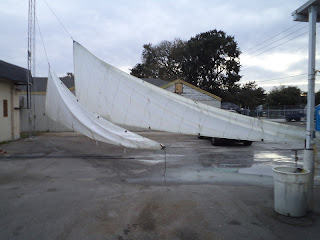 I had hoped to talk my way onto a Catalina Morgan 45 that I had my eye on.  It is under contract but I was still hoping that they would show it to us, along with a 38 that was still on the market.  The iPad got us through the downtown area and took us right to the Brokerage that was offering these boats.  Next door was a business that cleans sails.  The Brokerage was not open yet but these guys were already hard at work.  We are drawn in by all things "boaty" so we struck up a conversation with the owner. 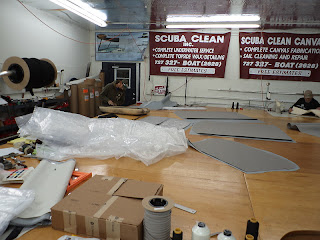 We spent a while watching these guys make boat cushion covers while the owner tried to contact the Broker for us.  We had to wait for him to contact the sellers of the boats we wanted to see, and while we waited, we learned about his business.  Evidently there are lots of businesses that cater to boating in the St. Pete area. 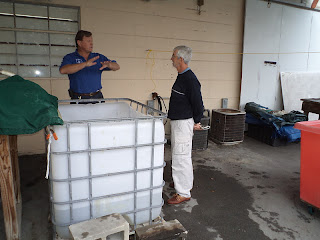 We were fascinated at how clean these sails were as compared to the one still soaking in the cleaning solution.  It was covered in green slime but would soon be as white as the ones strung out in the yard.  Pretty cool and not very expensive either. 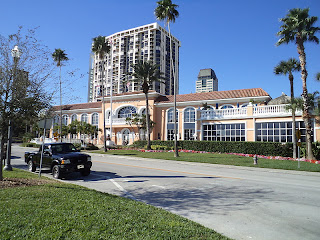 Well anyway, long story short... the Broker couldn't get us onto either boat today, so we left there to go see if we could find a dock to walk.  We drove to the waterfront and parked near the St. Petersburg Yacht Club.  Bruce wanted to get out his BYC Card and try to get in but I nixed that.  The place looked like a small palace and went on for blocks it seemed.  Who needs it?! 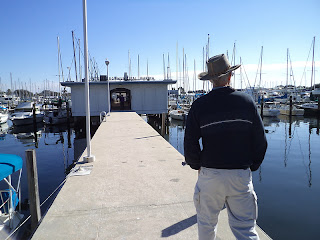 Once again we found the docks all locked down.  The only one we could get near were the Municipal Marina slips.  One nice thing about this place is that the slips come with assigned parking places.  Bruce checked into the Liveaboard rates for the Municipal and found them very reasonable with two parking spaces.  He's sold!  Wants to move here NOW! 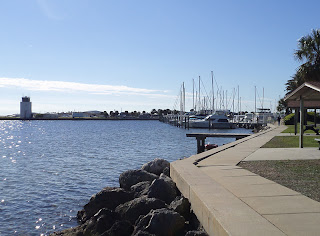 We had an hour on the parking meter so we took a stroll around the area.  The day was very mild and the sun felt good. 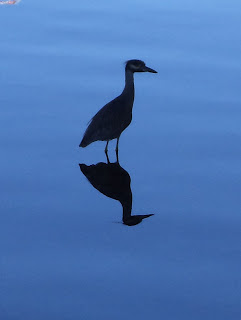 There are no ridiculous winds to deal with here... at least not today. 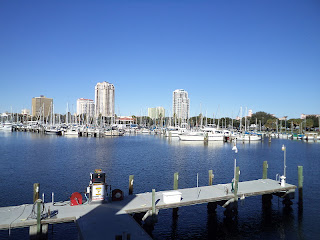 The boats were all nestled in their slips... 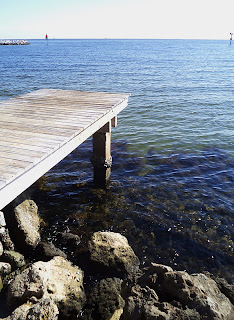 The water was clear and clean.  Tampa bay was placid and Bruce was even more certain that this would be a nice place to spend some time aboard a boat.  We spoke to a woman who was heading back to her boat anchored out just off the pier.  She said that there was inexpensive public transportation and a grocery store a couple of blocks away.  Perfect! 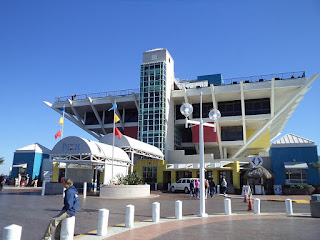 We could see some kind of oddly shaped building off at the end of a long pier.  There were pictures of it in our hotel so we knew it must be some kind of attraction.  We found it easily and parked the car.  Behold "The Pier". 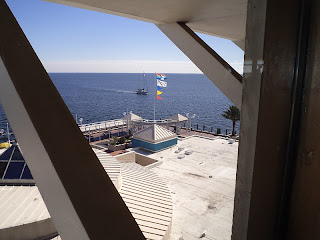 We had no idea what this thing was but boldly entered it's doors.  Inside it looked kind of like a mall, with little shops and restaurants lining the walkways.  It was time for lunch so we went up to The Columbia restaurant on the fourth floor.  The view was most excellent! 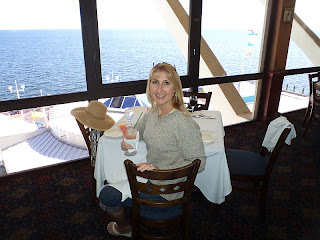 I was immediately worried that we were in the wrong place if we wanted a cheap lunch... Maybe a watermelon margarita will help me get over it!  This place had a world class view... 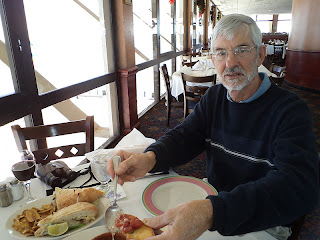 But was surprisingly affordable!  We had a yummy queso fundido appetiser and split a giant cubano sandwich made with delicious mouthwatering Cuban bread. 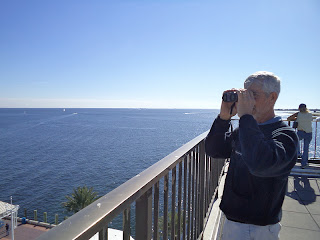 After lunch we went up onto the observation deck and had a look around. 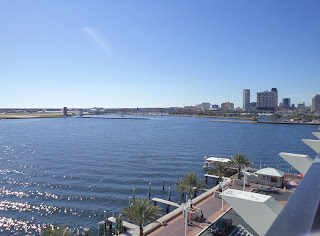 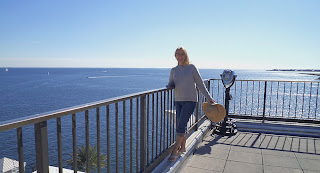 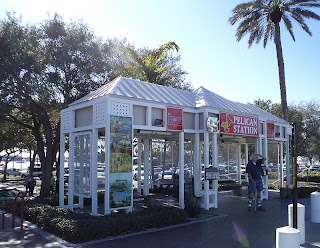 There are so many things we wanted to do in St. Pete, but the day was half over.  It was decision time... take a sight seeing boat ride or take the Looper Trolly around town to see what else is out there.  We opted for the Looper. It's very handy.  It does a loop around the downtown area taking tourists to all the hot spots.  Not a bad idea when parking is at a premium.  Maybe Corpus Christi should take notice.  The other trolly/bus that uses these same stops is a regular city bus line that can take a cruiser to the places they need to go.  The Bus driver was a good source of knowledge which, I suspect, is common among bus drivers.
We had to make a difficult decision.  Leave St. Pete and get on the road towards our next destination, or stay another night and have a really hard day of driving the next day...  We were good.  Head homeward..., it's over.