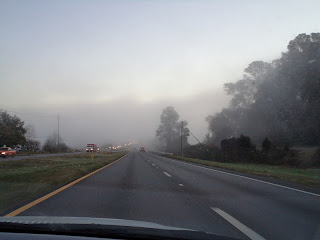 We set our alarm to get up early... we're crossing the line from Central to Eastern on this trip.  Sometimes the line is fuzzy.  We had a storm in the night which brought in a cold front.  It was 45 degrees when we left Panama City Beach and we saw temps everywhere from 32 to the 60's and fog! 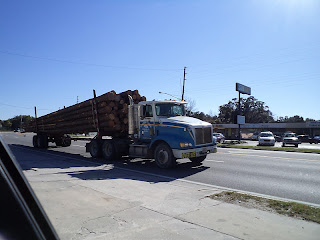 We travelled along enjoying the scenery.  There were vivid fall colors and surprisingly, so many pine trees.  When I think of Florida, I think of Palms.  Not so!  Evidently Florida is a logging Mecca! 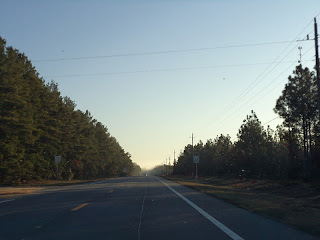 This was interesting to me.  All along the drive we found sections of Pine trees, some tall, others tiny, others medium sized.  It was something I've never seen before.  I wonder how long it takes a Pine tree to grow to harvest size... 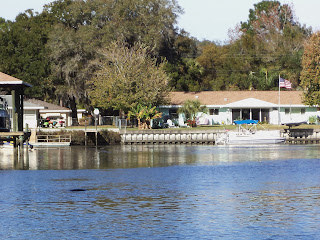 We consulted a very nice woman there at the Park office who hooked us up with a woman named Pavla, who runs a small Manatee Tour business (among other things) out of her home on a canal very near where the Manatee come in the winter.  We were just in time to dash to her home, be ushered through the house into the back yard and hop aboard her small pontoon boat.  We joined a Japanese couple with their (tiny) 10 year old child.  They were wearing wet suits as they would be swimming with the Manatee.  We opted for the dry tour as it's still just COLD!  Check out this picture, look closely at the water's surface near the shore.  Those bumps you see are our first glimpse of the Manatee.  They come up into these canals where the water is warm near hot springs.  They just "hang out". 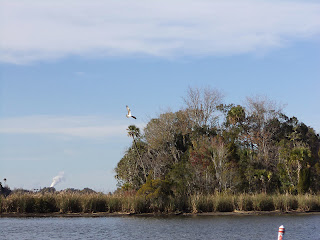 We continued on out into King's Bay where we were treated to a tour of the "not-so-touristy" areas.  We saw an American Eagle, two Osprey... 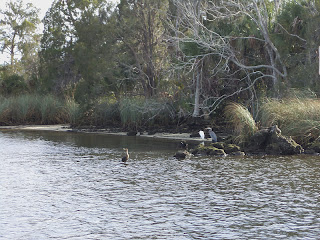 Many different types of ducks, heron, cormorants and pelicans. 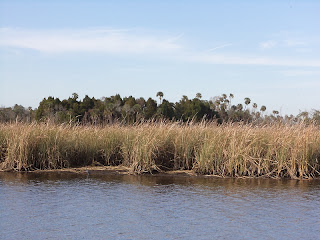 We even saw a little otter running along the bank.  He jumped into the water, swam a ways then popped back out and disappeared into the reeds.  What a treat! 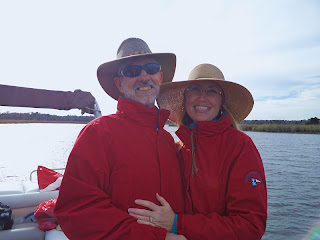 Pavla kept up a running commentary on the flora and fauna of the place.  She has a real appreciation for nature and showed us spots that were relatively untouched by commercialism.  This is what sets her tours apart from many of the others. 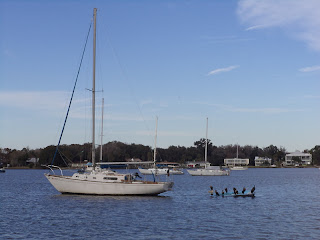 But... we're here to see MANATEE!  Thus far, we've seen shadows, bubbles and swooshes, but this is a Manatee tour.  And the Japanese people are starting to shiver!  So we make our way back to the canals, where most of the Manatee are lurking.  This whole Bay is fresh/brackish water coming from hot springs under the surface.  Hard to believe.  I questioned our host about the depths in King's Bay and found that it is deep enough for some sailboats to anchor.  I'll keep it on the list. 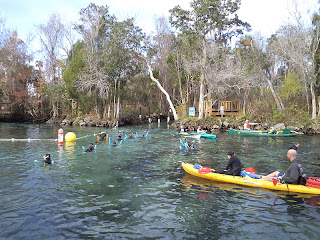 We backtracked and arrived at the entrance to Three Sisters, where the Manatee converge in the warm spring waters.  They are protected by a refuge area where they may go to get away from the reaching hands of people, but they can (and do) also come out and play with the crowds who come to see them here. 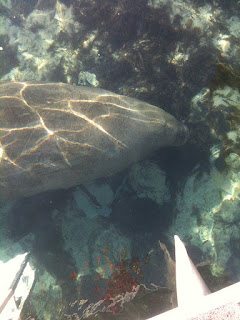 The Japanese family got into the water and disappeared up into the cove where the real fun is, but we were more than adequately entertained by these looming hulks drifting right under our feet. 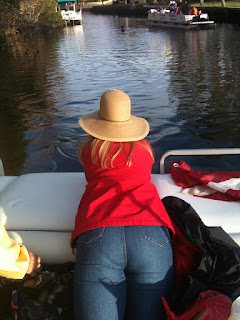 I could watch them for hours and we'll definitely come back here when it's a bit warmer.  (go on... get it out of your system...)


I've put the clips I took together in a movie to give you the full effect.

This was just a brief interlude in our day and we were soon on our way.  After collecting the Japanese family, we returned to the dock and said our goodbyes.  Pavla felt like family and we vowed to return. 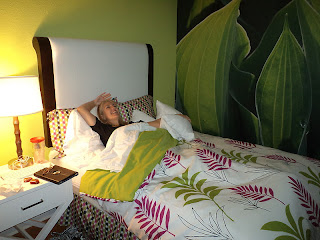 Our destination was St. Petersburg.  I made a reservation on Hotwire in a very trendy little "Boutique Hotel" called the Hotel Indigo.  We were WOWed with the decor!  From the front entrance to the bathroom, this place was Done UP!.  I was tickled to fall into the sumptuous bed with piles of pillows.  I made Bruce sleep on the other bed just so I could luxuriate in peace...

We spent a quiet night with Chick-Fil-A in the room for dinner, watched some TV, caught up on the Blogosphere and turned in.  It had been a long and full day.  Tomorrow, we explore St. Pete!