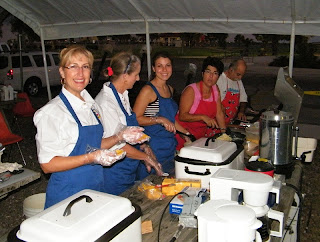 By now, anyone paying attention to what's going on in my life, knows that work has been my primary focus for months... So there's no need to remind the reader here that I was unable to join my husband and friends on this year's Harvest Moon Regatta.  This is something that I was quite unhappy about and spent the week pining and yearning to be off playing instead of stuck at my desk.  When Friday came 'round, I left work at 3pm and loaded the car with the necessary gear, and headed to Port A to check into our rented home for weekend. By bedtime, I had finished laying in groceries and  had collected Bruce and friend, Chuck from the CC Marina and brought them both back to the Condo to fall into bed.  These were two very tired boys.  I had committed to be at the Port A Marina to serve as volunteer for the first (Annual?) BYC breakfast for the Harvest Mooners.  It was still dark when we started serving at 7 am. 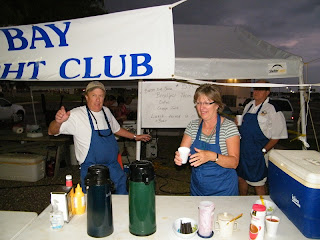 We had plenty of volunteers and we all had a great time.  Business was kind of slow at first, but who is up early after sailing in the conditions we had this year for the race.  It was high winds and high seas and I doubt many of the sailors had much, if any sleep along the way.  So we manned our posts and waited until our customers woke up with taquitos ready! 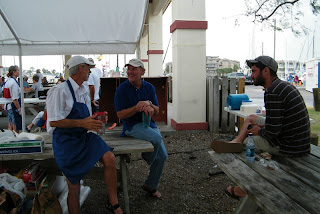 Brittney volunteered with me, which had Matt grumbling about being up so early on a Saturday!  Bruce and Chuck came along for moral support, but they were still very tired and pretty much just hung out.  We had plenty of help anyway.  It was really good to see Chuck.  I love that guy! 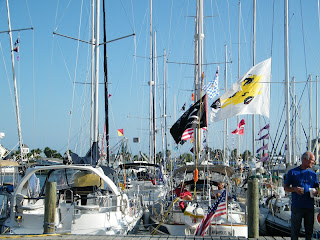 Well, Bruce took Chuck to the airport leaving me at the marina to begin the lunch shift, but we had more volunteers show up for that, so I was just a spectator.  Bruce picked me up and we went back to the Condo for lunch and a nap.  We all reconvened at the Marina in the late afternoon when the official Harvest Moon Party kicked off! 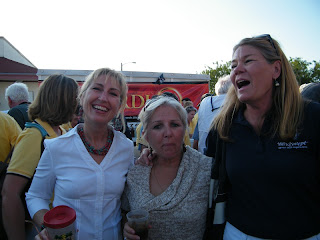 It was fun listening to the stories from the racers.  We had several Club Members who participated.  There was some worry about Starfish, who had turned back to put in at Freeport in the night after experiencing some mechanical difficulties.  But all is well so no worries.  Nothing a little money can't fix. 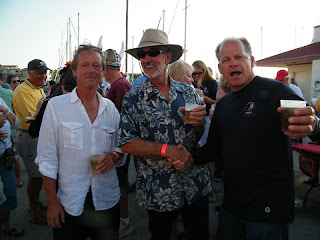 We all enjoyed the bottomless drinks supplied by Bacardi.  We met some of the racers from other Clubs and generally had a great time. There was a BBQ Dinner, which was OK, but then BBQ isn't really my thing anyway... Bruce liked it. 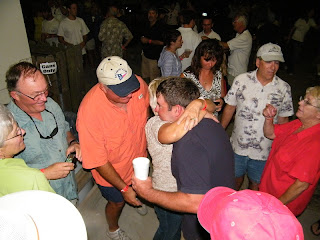 Then on to the awards.  There were over 200 boats in this race.  There were countless "classes", which all had 3 awards.  We milled around for EVER before things got interesting and they began announcing the winners for the classes we had friends in. 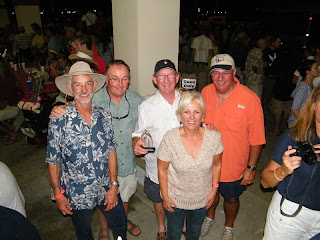 The BYC bunch and other local CC boats were well represented in the awards.  It was fun hearing the names called out for boats we know.  Everyone was excited for the winners and even more so knowing what a harrowing time they all had out there.  I was somewhat melancholy about the whole thing.  I would have loved to have gone, but in hindsight, I probably wouldn't have enjoyed the sail... but then here I am, left out of the afterglow... the camaraderie, the having-made-it-through-it'edness that my friends and husband were now enjoying.  Oh well, I'm very happy for all of them.  SeaFlight got 3rd place in their class.  Brenda was ecstatic!  I watched and took pictures of it all and hoped that my employer has some little appreciation of the sacrifice I made in not going on the race.  Next year, I'll be out there!  Congratulations to all of my friends who did so well and made CC Bay area sailors proud!