All of My October In One Weekend

Enjoy first, the conglomeration of video clips I got while we approached the Flato Cut... 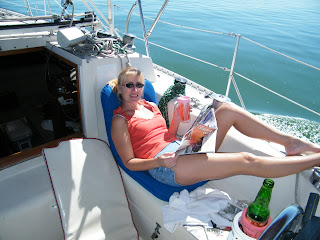 I've been so snowed under with work this last 4 months, I've hardly noticed that its October... the best month of the year!  The weather has been great, the temperatures comfortable, and I've been doing nothing but working and sleeping.  This weekend, the forecast was for "Sublime"... so we opted to ditch the BYC Halloween Party and go off by ourselves on the boat. 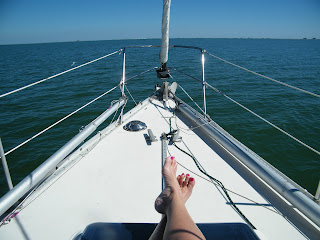 We left the slip with almost no wind... the bay was flat and nearly devoid of the merest wrinkle.  I settled in on the deck to catch up on my Lats & Atts magazines that had been stacking up on my bedside. 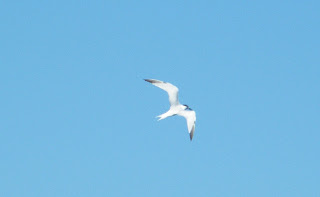 Our destination was Flato Cut.  We have never been there and it moved to the front of the list out of the many wonderful places there are to anchor out in our area.  The reason was, I wanted to be away from people... all people!  Just Bruce and I, and the occasional bird. 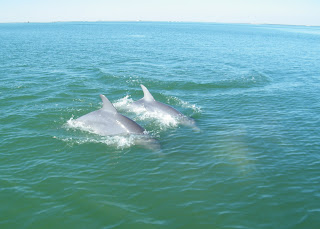 We motored all the way across the Bay.  It was my time to relax and get into "Cruiser Mode".  I forgot all of the things I need to do at work and just cleared my mind of all but enjoying the moment and the beautiful day.  As we neared our destination, we were joined by a pod of Dolphin.  You saw video of some of the best clips I was able to get.  Let me assure you, the video footage is only a pale representation of the show we got. 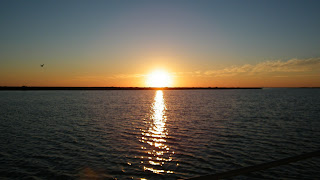 We did a loop to prolong our entertainment with the Dolphin, then finally motored through the cut and into the open anchorage that is Flato.  We settled in for an afternoon of decadent relaxation.  The most strenuous thing I did all afternoon was to buy a CD on i-Tunes.  There's no place I can't SHOP!  We waited for sundown with the sounds of the abundant wildlife all around as the birds settled in for the night. 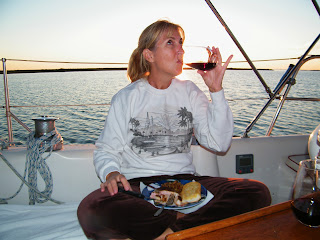 Bruce fired up the grill off the stern and made some scrumptious pork loin chops while I heated up some purple hulled peas and garlic bread to go with a very nice Zinfandel.  This was our sunset. 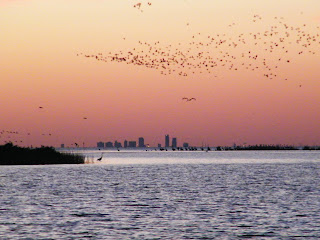 After dinner, we snuggled down in the cockpit to enjoy nature's song as the birds prepared for the night.  We could see our City far off in the distance through the cut.  The lights began to sparkle as stars do, like intermittent sprinkling of fairy dust.  It was marvelously quiet and still.
I was abed early, as usual.  I think I made it to 8pm, then off to the V-berth for a restful night.  The windows were partly open, the air was fresh, the night was quiet.  My sleep was punctuated only by the occasional honk of a blue heron as his sleep was disturbed by some unseen villain. 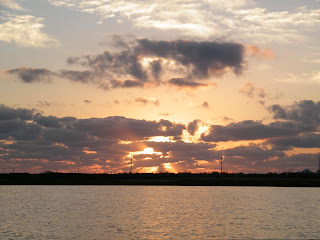 Morning came and we were up just before sunrise.  I prepared to read in bed but Bruce made me come to the cockpit if I was to get my coffee with Baileys.  Mean mean man that he is...  So I took up my red riding hood and my Kindle and received my reward. 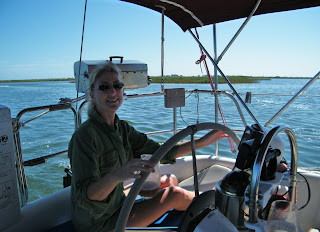 We lazed around until well after the sun was up.  I cooked breakfast with a bit of drama... before the eggs were done, we ran out of propane in the big bottle.  We had to search around for the adapter to connect one of the spare bottles.  But we found it and finished off our breakfast late in the morning.  By the time we had cleaned up and done a minor boat project, it was noon and time to head for reality. 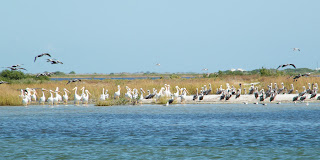 We motored back out of Flato Cut the way we had come in, hoping for a repeat performance by the Dolphin pod, but it was not to be.  We were waved off by the proprietary group of White Pelicans and other birds that we had passed coming in with little notice after the excitement from the Dolphins.  These beauties received our full attention this time. 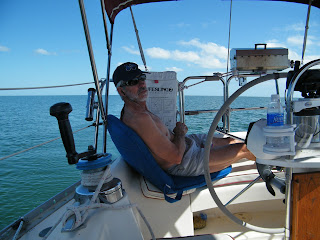 We began our trek back to the slip with very little wind, which turned to nearly no wind.  Bruce was on the verge of starting the engine when I asked him "why?"... to which he replied, "you're right!".  We were moving in the right direction, although very slowly... but we were in paradise.  So, we inched along for a while.  Very gradually, the winds came up and our speed increased.  It wasn't until we neared the Gap back on our home side of the Bay that there was enough going on to warrant the need for manning the wheel.  Then it was a fun romp for home.  We docked and tidied up, loaded our gear for home and the weekend was over.  I had packed my whole October into one weekend, for tomorrow... it's November!