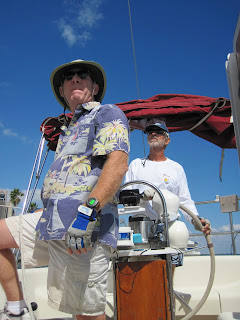 I've been so busy at work, I wasn't really too excited about this race.  I just wanted to rest... but Bruce really wanted to do the race, so off we went.  Brittney was doing School Stuff so it was just me and the guys.
Elan was the last boat to start as this is a pursuit race, so we milled around until our turn.  The winds were out of the East.  We overstood the lay line for marker #71 to avoid being too close to Warrior
. 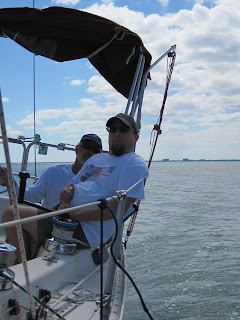 We rounded the mark and headed for #19.  We had passed only Adagio by this time and were working hard to make up time on the other boats.  The winds were fluky and we had a difficult time making the mark.  We made two tacks and it was really questionable that we would make it without tacking again. 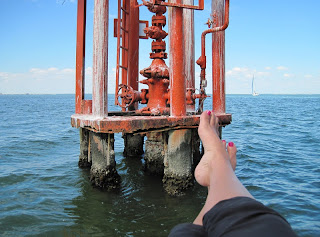 The winds were not cooperating and kept shifting, first it was looking good, then it wasn't.  Clay was confident and it turned out he was right, but not by much! 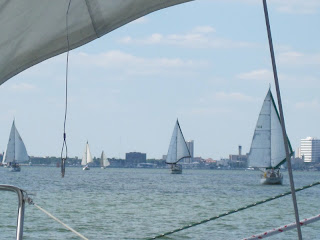 After rounding #19, it was back to take #2 to Port.  We followed the fleet with one jibe before the mark. 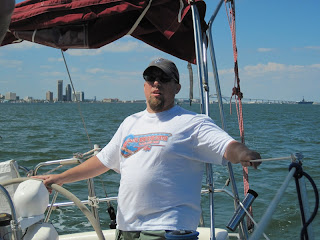 Clay took the helm to take us back upwind with two tacks.  We passed Kerry Ann and Brigadoon near #71.  We put the pole back out after rounding and headed for the Gap. 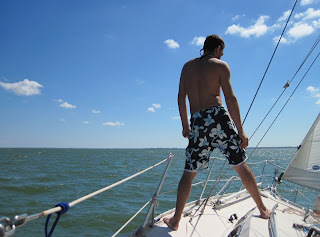 We ended this race in 5th place.  I didn't go to the party at the Club but Bruce did.  Elan finished the Saturday Series in 3rd place after Agape and Warrior were tied for First, but Agape took first as they did better in the final race.
Agape ended up joing BYC that night.  Only fitting as they came, raced and took home the prize.  We're glad to have another worthy Clubmember out of it all.