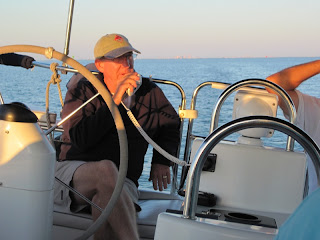 This year we had committed to do the Harvest Moon Regatta with friends Mark and Brenda, just as in the previous two years.  However, I had to go it alone... work kept Tammy tied up at home.

We left Corpus Christi early on Monday morning, October 18th headed for the Gulf of Mexico.  We had plenty of crew with Mark, Don, Russ, Johnny and myself.  Brenda was to fly in on Wednesday night. 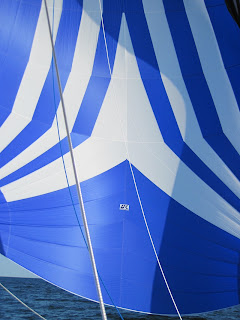 We motored across the Corpus Christi Bay and out through the Port A Jetties.  A few miles out in the Gulf, the wind picked up enough to fly Mark's new spinaker. 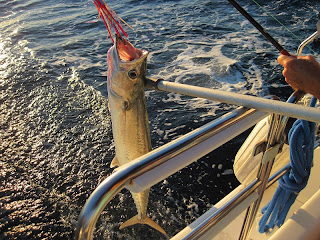 We entertained ourselves by trolling two fisihing rods.  We caught two kingfish.  We didn't want to clean them, so we released them.  It was a beautiful sailing day.  The boat was doing around 6-7 kts.  Easy sailing, good company.  Mark heated up Brenda's beef stew for dinner, then set up a two hour watch schedule as we prepared for the night. 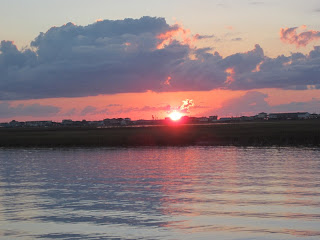 Johnny and Don took the first watch, Russ and I took the second, while Mark basically stayed up all night with both watches.  We took the spinaker down and found it necessary to slow the boat down so that we wouldn't arrive at Freeport before dawn.  It was still dark as we approached the jetties causing high anxiety as we strained to pick out the green and red entrance lights from the other green and red lights ashore.  Just as we hit Freeport, the sun broke out, we could see, and life was good. 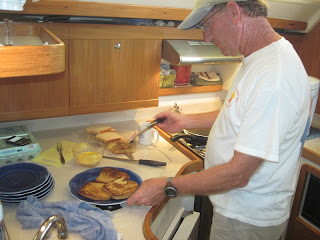 We entered the calm waters of the ICW and the winds died.  Mark went below and cooked a full breakfast for his crew.  We motored our way towards Harbor Walk Marina.  Chip was behind us on Starfish and we noticed he ran aground, so we turned back to help pull him off.   Fortunately for us, our Kharma was shiny and clean... SeaFlight ran agound at the entrance to Harbor Walk, and Chip returned the favor.  We spent the afternoon on Tuesday and all of Wednesday hanging out in the Marina.  Brenda arrived in the evening and Johnny left.  We were also joined by my friend Chuck, to round out our race crew of 6. 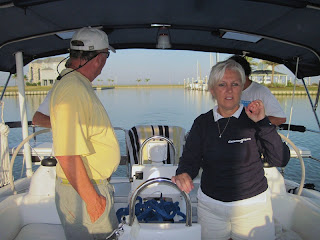 Thursday morning the winds were calm and we found ourselves motoring again.  We had another fabulous breakfast, this time with Brenda as the Hostess with the Mostest. 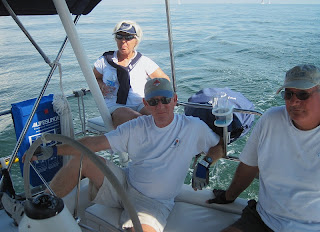 We motored all the way to the Gulf before raising a sail. The crew lounged around as we were over an hour early for our start. 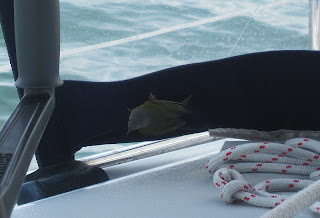 We were joined by a tiny passenger.  This little bird hung out with us on SeaFlight for about 15 minutes before flying off to visit someone else. 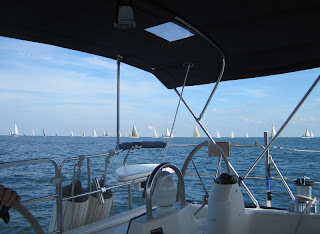 Finally we arrived at the start area.  The winds were at about 6 kts with 37 boats all struggling to get the best position.  Everyone was trying to find wind.   For the next 5 hours, we ghosted in 6 kt winds, doing 3 kts SOG.  We constantly adjusted the sails to the point that my neck was sore for three days from looking up at sails.  It was worth it though, we really did well against the other boats in our start. 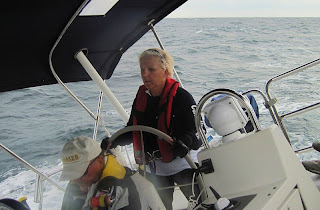 The winds began to increase at around 7pm.  By 9 pm we were badly overpowered.   We reefed the sails but were still were still overpowered as we screamed along doing 7 kts.  The waves built during the night causing the boat to toss around.  It was difficult to go below or to sleep.  The winds topped out at 35 kts overnight.  Friday morning, the winds eased somewhat but turned back up again to hold at 26 to 35 kts for the duration of the race. 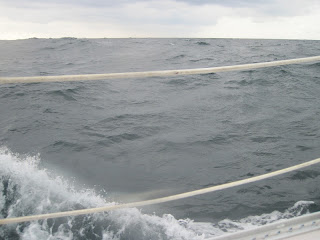 Friday saw everyone except for Chuck, spending their time in the cockpit to avoid going below, as seasickness was on everyone's mind.  The camera battery went dead and I wasn't going below to find the spare.  This is the one big wave pic I got before losing the battery.  The sease were every bit of 10 ft with short chop.  No exaggeration.
We finished the race at about 5pm on Friday.  We crossed the line and continued on across CC Bay to the slip.  We had a fantastic sail on the Bay and cruised along at 7 kts on autopilot.  It was a good way to end the day.  We all went our separate ways to reconvene in Port A on Saturday for the post race festivities.