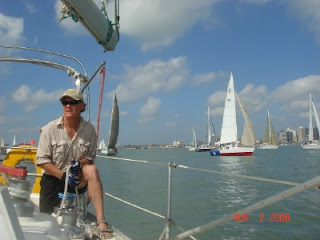 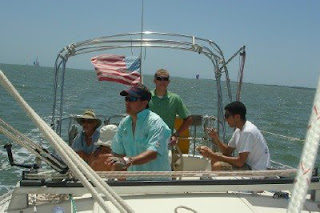 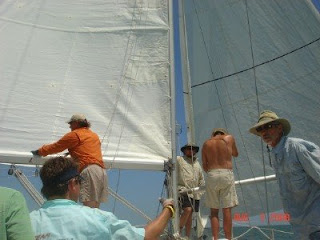 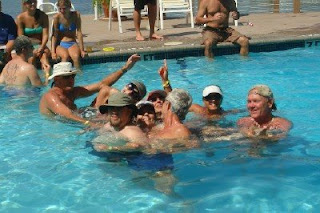 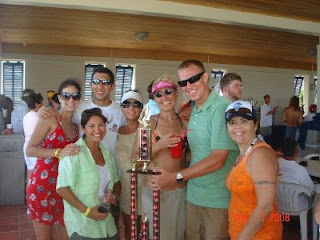 Sunday we were back out there with the second day downwind race beginning at noon. We only lost one crew member, Tricia due to sunburn. This race is helmed by Navy personnel. Our regular crew member who satisfies this condition was unavoidably called to the Pentagon the previous week and so, could not be with us. We missed Matt and his wife Melissa Ann terribly. We had two very nice young men, Nick and Thomas, on loan from NASCC. Neither of them had any sailing experience.

We started the race with Bruce directing the crew and myself directing Nick at the helm. After we got under way and everything was settled on the foredeck, Bruce relieved me directing the helmsman. Nick gave up his spot to Thomas shortly after the race began. It’s very stressful to start a race if you have never sailed a boat before. I think we wore Nick out early on. Both Nick and Thomas did a great job!

The race back to Corpus Christi was relatively uneventful. The crew languished on the foredeck trying to stay in the shade of the sail. The guys in the cockpit, poor souls, melted in the sun for the duration of the race. We stayed on the inside of the fleet the whole way. Warrior, the second place winner from day one, swooped up to pass us and won first place. We had to settle for second place on Sunday but it was no burden. Unbelievable to place on both days on Elan! It brought back memories of our early days on Lady Jane and the White Pepper, where Bruce and I met as crew members.

The party at the CCYC was great fun as usual, relaxing in the pool, horsing around and catching up on all of the sailing gossip from other boats. We bestowed the 2nd place trophy on the helmsmen as is customary for the Navy Day Regatta. It’s nice that some things never change. This regatta is one of them. Thanks to all of our crew and friends for a dream come true for Bruce and I on Elan!