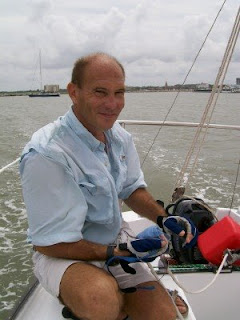 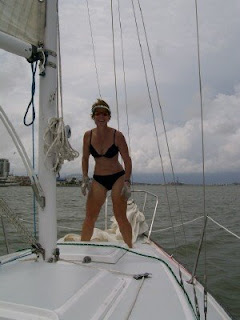 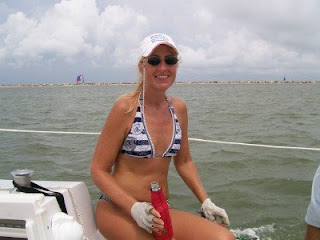 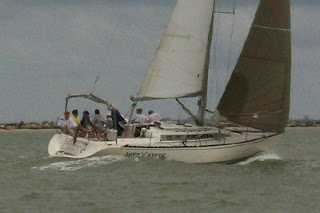 Saturday Bruce got up and left the house early to join the Wet Express crew for the final day of race week. I was left at home alone for a few precious hours to do “house stuff”. Bruce and I are so much together that it’s a rare thing to find myself alone.

But it didn’t last long… Steve and Jacquie picked me up to go help them break in a new outboard motor and to do some practicing on Cute Shoes. I had so much fun the last time and today was no different, although it was a much more relaxed time, not being a race. We did some minor boat chores and motored around for nearly an hour before putting up the sails. This was no bad thing as it’s always pleasant to be out on the water enjoying the view of our skyline. It was cloudy so it was very comfortable out on the boat.

Steve worked Jacquie and I hard for a while…tacking this way and jibing that way and doing it all over and over again. He’s trying to work out his systems on the boat. It was fun though, as tacking the smaller boat isn’t nearly as strenuous as tacking a larger boat. I was enjoying having some “hands on” experience. We simulated a race start. We didn’t do too badly.

We kept our eye on the last of the Race Week races and were there at the finish when the boats came in. I took some pictures from afar. Part of me had minor twinges of regret that I hadn’t chosen to do the race, but only a very small part. I thoroughly enjoyed my day with Steve and Jacquie.
Bruce came to collect me when we came to the slip and we went over to CCYC for the awards ceremony. The guys thought that they had done a bit better than they did. They all agreed that as badly as the race had gone on Wednesday night, that’s how well it went on Saturday. The crew all felt that they had sailed well, but the other boats had sailed better. They lacked a #1 jib for the first two races in light air. Using a #2 jib they managed 2 6th place finishes. The third race was better as the wind picked up they moved up to a 4th place finish. The overall win went to Passion, a Santa Cruz 50 who had finished 4th in this year's Trans Pac race. A good time was had by all and it was a very good day! Now they’re all fired up to do the next race…the Bill Best Memorial Regatta in 3 weeks.