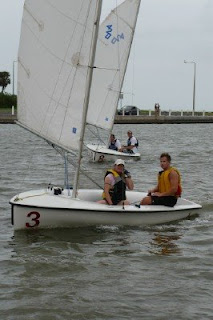 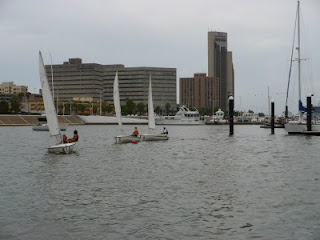 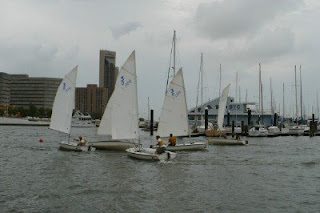 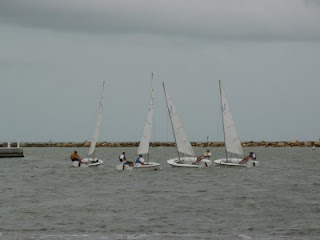 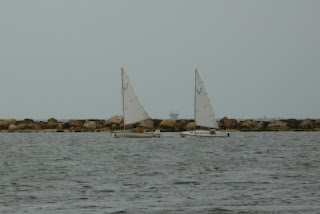 Friday evening’s event was the 420 Dinghy races. There were 7 boats entered in Race Week. Our guy, John, was on boat #3. I’ll have to say that however badly he did on Wednesday night, he more than made up for it on Friday…
Bruce and I met the rest of the captains and crew members out at the end of the CCYC dock to spectate. Passion was there with the boat tunes going. There were libations for all. We had hoped that the forecast rains would hold off and they did.
John and Desiree started off together but as most of the other boats opted for single handing, the decision was made for Des to step aside to let our Dinghy Champion see what he could do. Only 2 of the 7 boats kept a second man aboard. This proved disastrous for both of them
The first race we were challenged by Blue Max’s crew, but probably due to the fact that there were 2 aboard, they dropped back by the end. The rounding of the near mark was a bit dicey as there was a near collision when the coming boats met the going boats. This was very exciting with shrieks from the crowd. The Blue Max boat cleared the way for our Rock Star to battle it out with our home grown king-of-the-bay, Doug, and our resident 1979 World's champion fin class sailor, Mark Foster. It was close but John won in the end. Things were looking up.
The second and third races were both a battle of wills and skills between John on #3 and Doug on #2. This was how it went the rest of the evening and that’s how it ended up.
During the course of the evening, we had the usual coming and going of the local shrimpers which brought the scavenger pelicans down upon us. A couple of guys on one boat had some fun sailing through the middle of them. Boys will be boys…
The crowd of spectators were all asking who this guy was who came in and swooped up all of the first place bullets. John did a great job. So it’s Rock Star….singular! 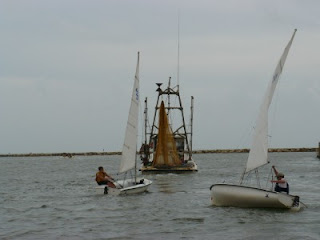 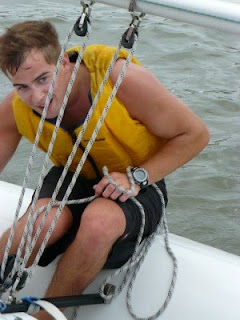