When I look back at the post immediately prior to this one, it seems like it happened so long ago.  Things started out so well.  Sure, the initial two week duration of the lockdown due to the Novel Coronavirus that causes COVID-19 was extended... and extended again, and again.  But we were making the best of it.  I had us eating healthy foods, maintaining the weight loss plan and getting outside to exercise daily.  In fact, that was the highlight and purpose of our days.  It gave me a sense of control of the situation that kept my mind from spinning out. It's all a blur now.  The only way I can make any sense of it all is to go through the photos.
End of March into April... 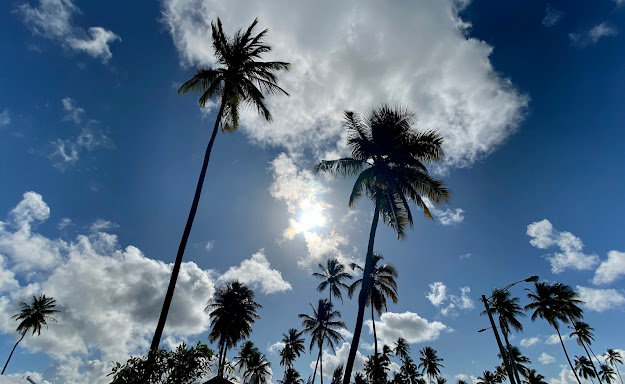 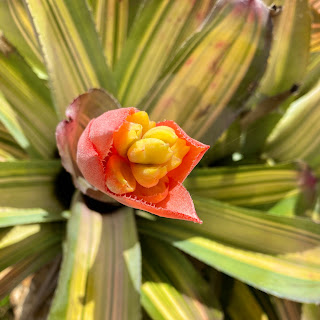 We walked every day.  We began inside our courtyard, and mostly walked in the cool of the evenings when there was some shade from our buildings.  Then we got tired of that view and moved our walks to the outside perimeter of our condo property and found that walking in the cool of the early morning was preferable.
I began to look for the beauty of the little things all around us.  There was little outside stimulation for our minds, so our whole world zeroed in to this little patch of coastline.  My need to take photos could not be squelched.  No matter if the subject matter was sparse, I found something to take pictures of each day.
The fact that we live on a tropical island where beautiful flowers bloom year round became more evident as my eye was forced to seek beauty in a more limited space.
We grew hyper-familiar with the position of the sun, and enjoyed the occasional passing rain shower. No need to go inside, it will end soon enough and we'll be refreshed and maybe catch sight of the rainbow-de-jour!

A pair of St Lucia Orioles have come to Arroy 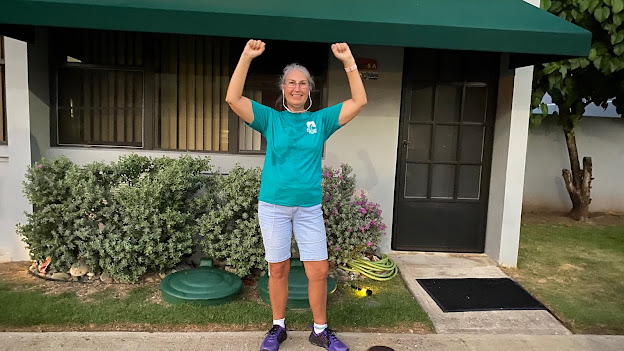 But walking only took up an hour or so each day... what did we do with the rest of our time?  With the news running on a constant loop about the COVID and other signs of a world gone mad, we tried to make sense of it all.  Obviously we can't go out, so we have to figure out things to do inside.  The one obvious thing was cooking.  It became a challenge to cook things that could keep my diet happy.  Add to that, we tried to help the local economy by seeking out island growers and producers.  I signed up for island grown food delivery for a while.  I really tried.  I even made a few things with plantains and papaya that were outside of my comfort zone, that actually turned out pretty good!

Once the argument over whether or not it was safe, and/or required that we should wear face masks when going out in public, I dug out my material scraps and sewing machine, and went to work making masks for us.  I even cannibalized a tie-died shirt that I never wore and made some really fun ones!  This took me several days! 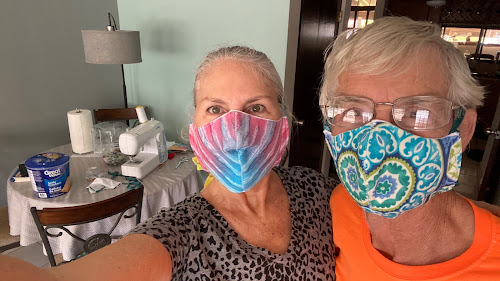 Finally the appointment day arrived, I was really hoping for some definitive information from the Physiotherapist.  He did actually examine my foot.  He seemed concerned that it was now about seven weeks since the accident and I was still swelling and painful. He felt around on my foot and in fact, found one of those really painful spots.  He looked again at the x-ray and HE said that there was a break.  He did a lot of eye rolling, and told me that if I had come in six weeks ago, the foot would have been casted.  (I just can't EVEN...) He ordered the long awaited MRI.  And then I waited another week to get that!!!
But I was feeling positive that I would finally get the answers I needed to squelch my doubts.  I was mostly upbeat, except that I have developed a sort of pattern.  Two or three days of positive thinking, followed by one day of wallowing in self-pity.  It works. I got the MRI and the report confirmed that there were two non-displaced fractures at the base of my 2nd and third metatarsal bones. (See, I told you I was sick) There are also bone marrow contusions that, with an internet search, explained the deep aching in a couple of spots.  Well at least now I was getting somewhere.  Unfortunately, the internet told me that it could take up to 6 months for the bone contusions to heal!!!  Another dip in attitude to follow... 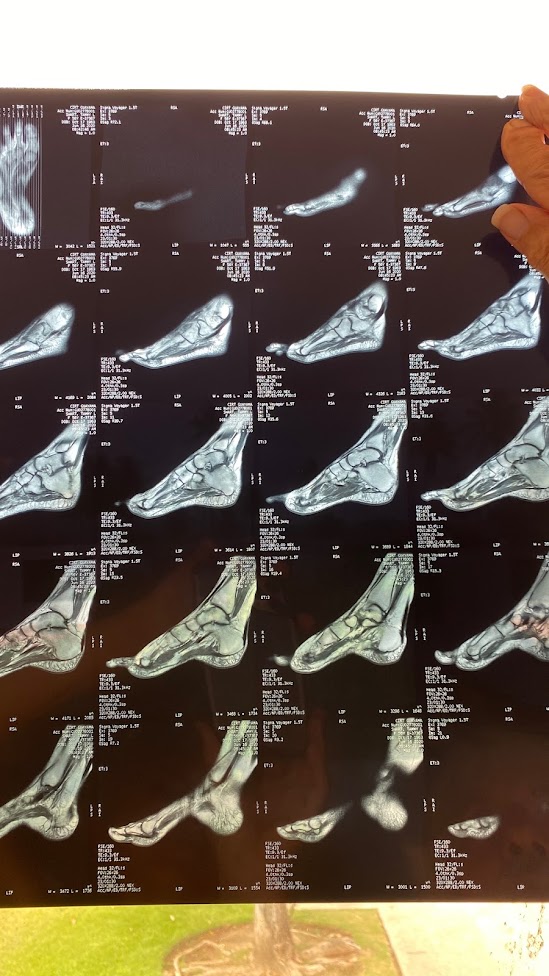 Before the next visit with the physiotherapist came a followup with my PCP.  He prescribed more anti-inflammatories, and told me to start trying to bear weight on the foot.  Two days later at the PT office, he advised about half a dozen things, including moving the foot and trying to begin weight bearing, buying a walking boot, maybe taking Rx meds that they give amputees for phantom limb pain!!! Wait, what?  You think my pain is in my head!??  How do you explain all of this swelling then?  Yeah, not taking that.  Stop just trying to throw medications at me.  Oh, and he also said to stop taking the anti-inflammatory drugs because they can impede the healing process!!!  The visit ended with yet another referral to an.... orthopedic surgeon!  Well, great.  Back to square one.  The Cam Boot was a no-go. I went to try to get one, and couldn't even put my foot into it because of the excruciating pain.
Another disheartening week during which I tried to get an appointment with the ortho... finally got one... wait another week... More ups and downs, but lots of pool time.  It seems that I can go two days of trying to hobble and swimming in the pool, then I sit out for a day or two with swelling and increased pain.  More crying. More sucking it up and trying to be positive...
One day, my wonderful neighbors threw together a beach picnic!  Kim texted me an invitation and we were thrilled to accept.  We loaded up the wagon and went out to make ourselves a little camp.  It was a lovely afternoon, even with the passing rain!  Kim made us delicious food and we enjoyed a little bit of almost normalcy!  We are so fortunate to have this beach at our doorstep! 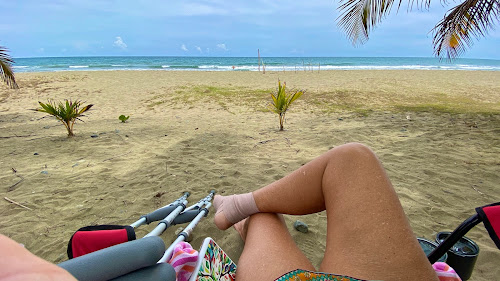 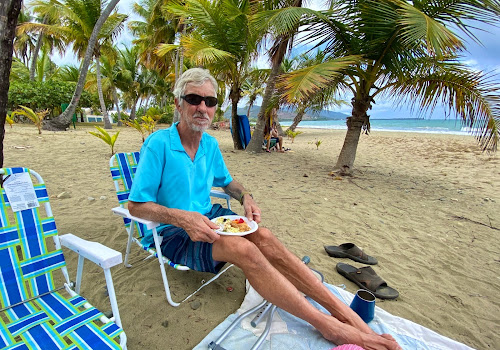 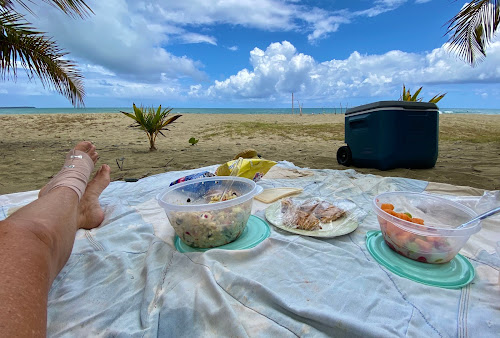 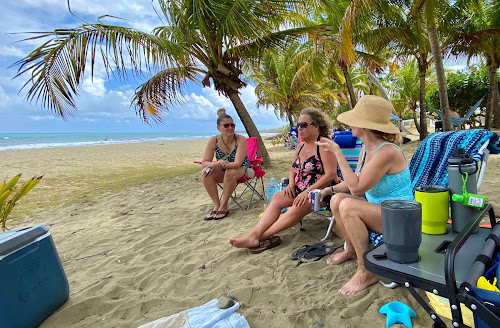 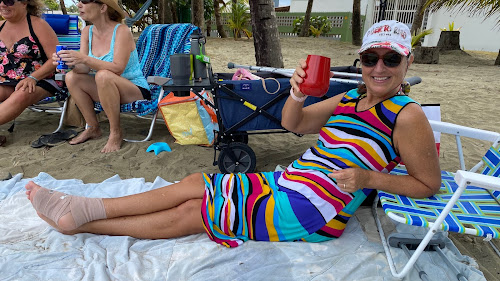 We had such fun that day!  I'm so thankful to Kim!  (And Sue has been there for much needed moral support.) Kim has been driving us in our car (she has a Mini) to shopping and even took us to Sam's Club one day!   Just driving the roads is something we've sorely missed!  We stopped at one of our favorite bakeries for brunch on the way.  This was the first time we've eaten out since March.  It's now June 16th!!!  Time is passing... I began to have better good days, followed by not-quite-as-bad bad days... so there's that...


So during this time, June into July... we fell into a pattern of pool days, grocery shopping, and waiting for the next doctor's visit. 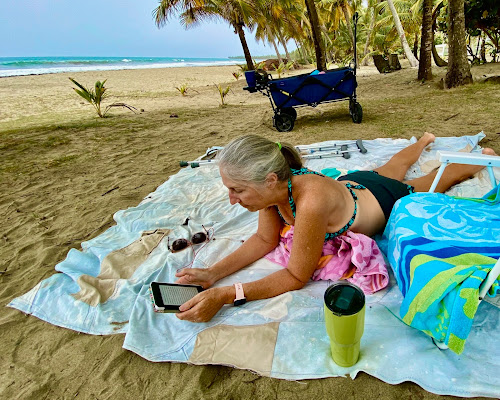 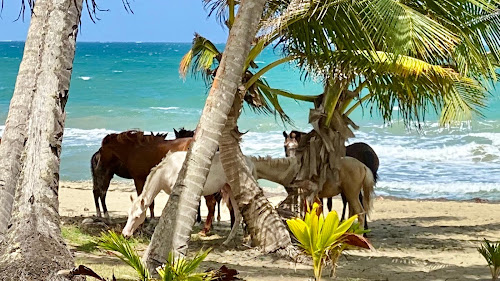 I finally got an appointment with an Orthopedic Surgeon but we would have to go to San Juan.  Thankfully our friend Glenn was willing to get up early and drive us into the city.  What would we do without our friends?  I don't know.  I only hope that we are somehow able to reciprocate some day.
And that brings me up to date.  The orthopedic surgeon was very nice, but he seemed adamant that I need to be doing physical therapy.  He said that he is certain that the breaks in the bone have healed and that I need to be weight bearing ASAP.  So I asked him how he explains all of this swelling, that was so evident when I kicked off my house slipper and showed him my two feet comparatively.  One was kind of tan with veins and bones showing through the skin... and the other was sort of a red sausage that was swelled up so much that my toes don't touch the floor when I put it down.
So after my consultation with the OS, I walked (crutched/limped) out of there with assurances that the breaks in my bones have healed, and that the swelling and continued pain could be a combination of decreased circulation due to disuse, or my diagnosis for the visit of causalgia.
Great, so it IS all in my head!!! But I can tell you this.  If my head is convinced of something, it becomes a reality.  Now that I've been assured that I must begin walking on the foot, even though it feels like it's cracking in half when I put weight on it and it swells up like a sausage...  That I will do!  Now I have to deal with my serious lack of patience and keep talking myself OUT of trying to drive to Puri's Tiki bar for a happy hour snack!  I'll go for Physical Therapy soon, but I'm once again encouraged.  I even popped some Tylenol this morning, stuffed my foot into an oversized beach shoe while the swelling was still minimal, and hobbled down the sidewalk for a little exercise!
I can't believe that we've been on lockdown for almost four months.  I can't believe that I've been one-legged for 10 weeks of that time... But I guess if we can't get out and enjoy the island because of COVID, this is the best time to be having a medical crisis... Unless you consider that the reason I even HAD a medical crisis was that I couldn't be effectively treated and/or diagnosed because of the COVID shutdown... It's a vicious cycle!  Just as my mind has been trapped in a vicious cycle alternating between dealing with it... and LOSIN' IT!